This evening was our branch Easter party. We made some brownies for dessert from a mix that Lydia gave us. It was my first time making brownies. Ever. And no, I didn’t eat any.

We asked Rachel if she wanted to help decorate it, which she did. Andrew moved the cake down within her reach and the first thing she did was stick all five of her fingers in it at once. I think she was planning on grabbing a fistful, but we stopped her before she could fully clench her hand together.

She must have heard “Do you want to help decorate it?”

And she was quite upset when she was stopped from having it. In the end, though, she learned that dumping sprinkles on cakes can be fun. Perhaps not as much fun as eating them, but still fun. Our brownies ended up looking like Easter had exploded on them. 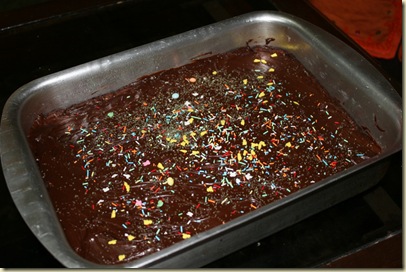 We got to the party a little early and Rachel clung to me the whole time. She wouldn’t get off my lap until Finn arrived. Then she hopped right off, ran across the yard, and gave him a huge hug! 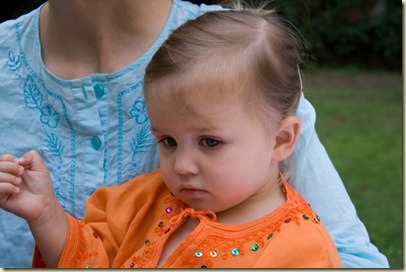 Soon after that we got prepped for the Easter egg hunt. Some of the youth had hidden some 70 plastic eggs around the backyard of the meeting house. Eleven children showed up for the hunt so they were each allowed to find 6 eggs. After they found their 6 eggs they could stop and eat their candy or they could help the younger children (ie: Rachel, Finn, and Loei) find the rest of their share. 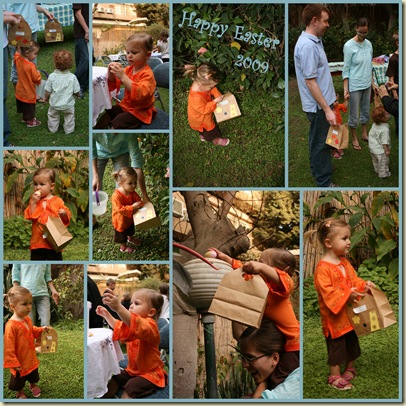 Rachel actually did fairly well. She found four eggs all by herself and put them in her little Easter sack that the Bestor girls had made up for each of the kids. Those four eggs all happened to be laying on the ground; I was impressed that she didn’t stop after finding one egg, though.

She actually knew exactly where the eggs were that she wanted to find because she had found them when she was hunting around the bushes before everyone got there.

“ED!” she yelled, pointing to a little yellow egg with a stick she had found.

We made her leave it there, but explained to her (for about the millionth time) that when she was allowed to pick up the eggs she should go get that one and then find some others.

She had a good time but it took her so long to find those four, laying in painfully obvious sight, that there were only hard eggs left when it was time for her to find her last two. I helped her find one on top of a lamppost and Rebekah helped her find her 6th egg. I have no idea where they found it.

Before we found those two, Rachel tried robbing Sarah’s basket. Sarah was not too happy about that but her dad thought it was hilarious. 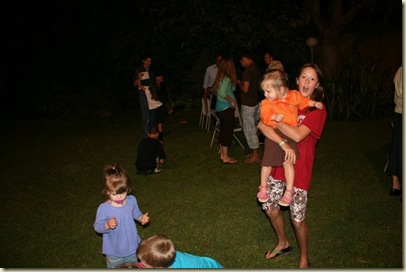 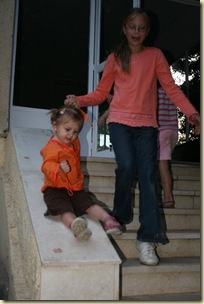 I’m so glad that the Houses have moved into the branch. All their kids adore Rachel and she loves spending time running around with them. Plus, they’re keeping our primary alive.

Rachel had a great time running around with all the big kids. It’s nice to have so many people around that love her so much! It’s almost like she has little aunts and uncles around. They all take such good care of her!

Even with all the attention she was getting from the big kids, Rachel didn’t forget that she was friends with the little kids, too. She spent a lot of time playing with both Jacquie and Finn. 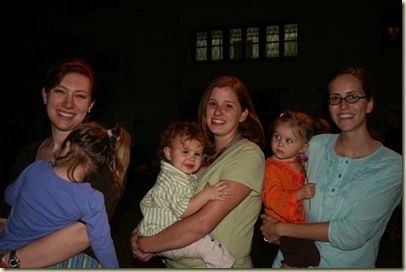 In the end we all said goodbye to the Penrods. They leave in the wee hours of the morning tomorrow. The Schillings are also leaving, but not for a few days still so we didn’t say goodbye yet. I hate saying goodbye. 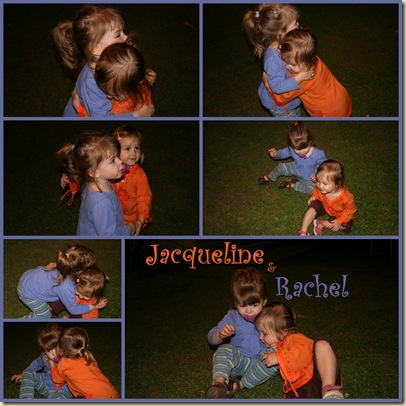 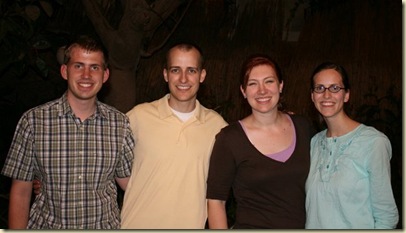 It was a fun evening. We gorged ourselves on lasagna and salad and had a lot of fun visiting with each other while doing so. The Cairo branch is definitely really special. It’s my family away from family.