Getting to a hill shouldn’t be a very difficult thing to do. They are kind of obvious, after all. But when there is hill after hill after hill covered in a sprawling city of buildings that mostly are identical, things get a little tricky.

Athens is very hilly. One might even call it mountainous, but truth be told, most of the peaks I’ve seen look like they could be climbed in a few short hours, if that. I know, because I climbed Lykavittos Hill (272.2 m) today, after only 2.5 hours of sleep.

Athens is also surprisingly dirty. I was expecting a glamorous European city but the impression I have is that it’s a rather trashy city. That said, we haven’t really hit up the touristy areas yet, so we’ll see if Greece can keep up the good ol’ European facade of absolute cleanliness as well as the rest of the EU.

We did see most of Athens today, though. Between our bus ride into downtown and our hike up Lykavittos Hill, I think we have the city covered.

Rachel was driving me crazy on the walk to the hill. She kept screaming and thrashing around in the stroller. I began to think that perhaps I wasn’t actually as fond of travelling as I originally thought. I was tired and all I wanted was a bed and a place to let my whiney child run loose. Things didn’t seem to be as bad when we went to Morocco and Spain. I began to think that Rachel just listens to Andrew better than she listens to me. 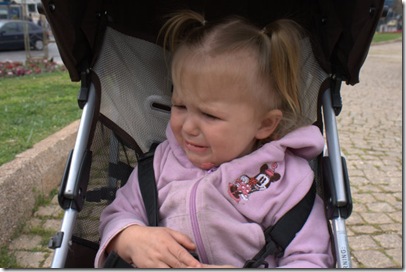 No matter how miserable I was right then, snapping her picture, I would eventually only have good memories of the trip. That’s why we do these things, right?

Apart from being dirty, and on happier notes, Athens is a very traditional city. I assume that most of Greece is, then. We’ve seen very few foreign stores—I haven’t even seen a McDonald’s here! McDonald’s is everywhere. But not in Athens, at least not that we could see anywhere. Local food, however, can be found just about on every street corner, which has been nice. We’ve been subsisting on fresh fruit and pastries.

Our hotel is in a pretty central but seedy part of town. This is helpful because we can walk everywhere we want to go, which saves on metro money. It is not so helpful because the neighbourhood is a little bit scary. But just a little bit. I think we’re more shocked than we ordinarily would be because we’ve been living in Cairo and aren’t used to seeing so much graffiti and hearing so many sirens.

We decided to walk to Lykavittos Hill even though we were both extremely disoriented and had no idea where it was. Walking the streets of Athens while pushing a stroller made me rather sympathetic for ancient marathon runners. Athens is a little hilly and pushing Rachel was making me rather exhausted. 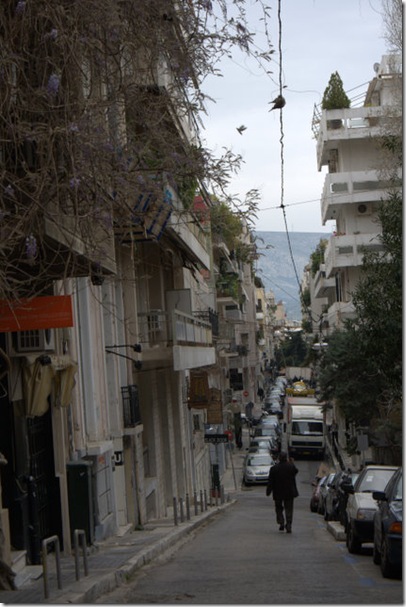 When we got to the part where the sidewalk ended and turned into stairs, I was about ready to give up, especially since Rachel wasn’t in the best mood. 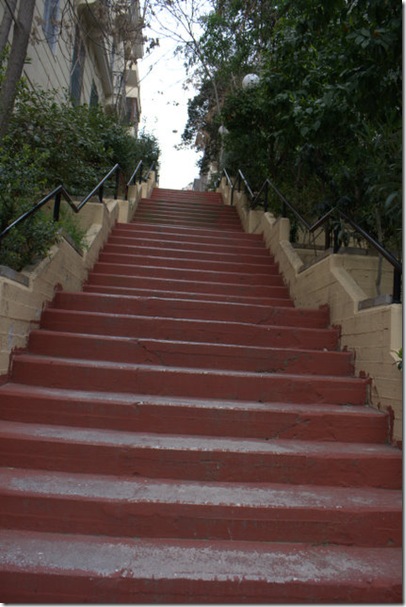 We rested at the bottom of the stairs for a while. Jaehee went into a little church and I sat outside with Rachel, who was snacking and screaming. I was about ready to start screaming myself, but Jaehee suggested that I go inside to see the church, which I did. It felt so good to sit in absolute solitude for a few minutes, away from my screaming baby. All I could hear was the occasional snapping of a lit candle.

I came back out feeling a bit better about climbing all those stairs. We still had no idea where we were going, however, and I wasn’t so sure about the whole “hill” concept. I could see a very tall hill rising above the apartment buildings and was quite positive I didn’t want to be climbing that hill.

It was that great, big, tall hill, though, and we made it all the way to the top. All the way to the top with a purse, a diaper bag, a stroller, a baby, a camera, and a blanket. Had I known we were going to be hiking I wouldn’t have brought so much stuff! 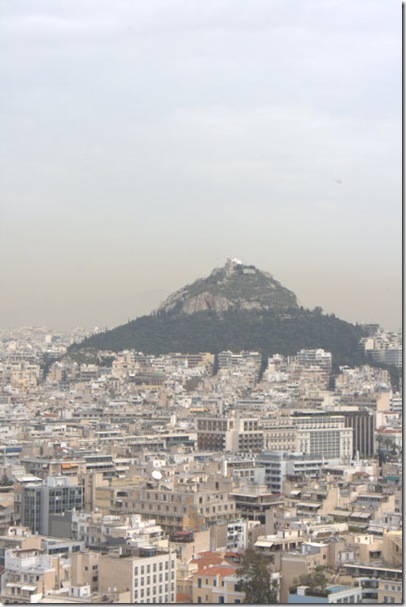 The first half of the hill was a welcome change from the Cairene landscape we call home. It was lush, green, and humid, but a cool, fresh breeze was blowing so it wasn’t the oppressive humidity you might expect. Butterflies and bumble bees were dancing around the wildflowers and turtles were crawling in the (empty) canal. More and more of the city opened up to us with each step we climbed. It was wonderful to be in a “forest” and amazing how absolutely huge Athens is. 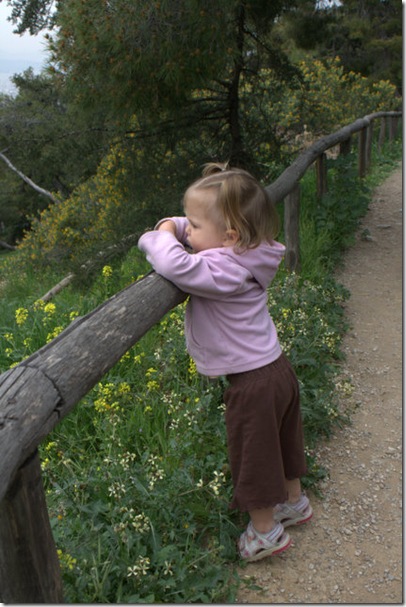 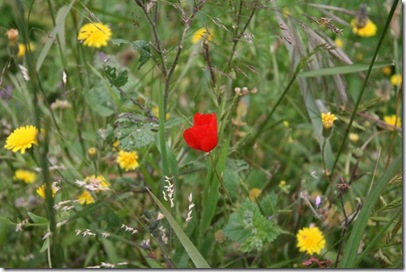 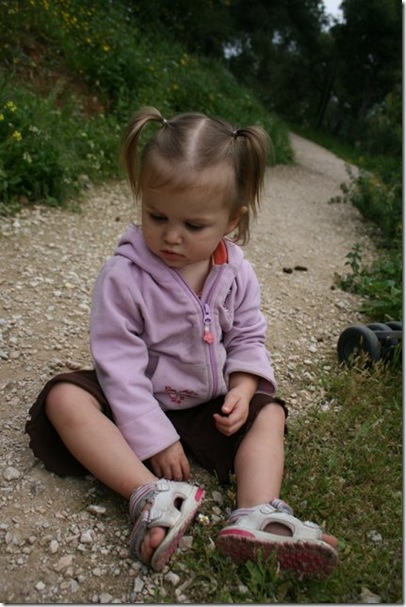 We had a wonderful view of the Acropolis from the penultimate peak of Lykavittos (as far as the cars can drive—we wish we had known about the paved driveway before we hiked up carrying the stroller). 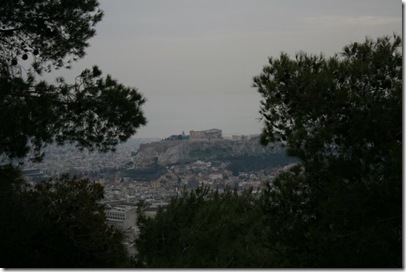 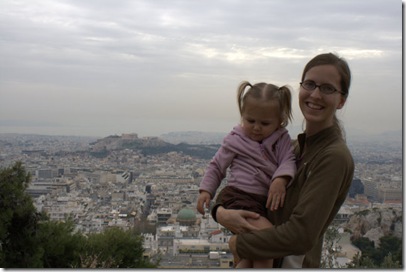 Rachel even got to get some of her dare-devil antics out before we made her start hiking again. 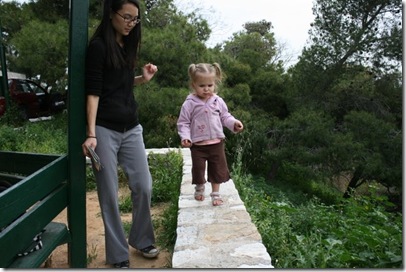 We found the paved walkway up to the top of Lykavittos and took that. Rachel wanted to walk most of the way and we found several benches in seemingly random locations, like in a field of cacti. The benches were very helpful when dealing with Rachel’s many temper tantrums so that we could get off the beaten path for a bit and scream in quasi-private. 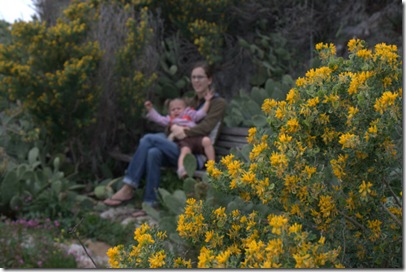 Eventually we all made it to the very top. The view was quite wonderful, although it was rather overcast, and we even saw the sea! There are restaurants at the top, which were well over our budget, and a church, and some vendors. Who would have thought that the top of a hill would be such a happening place? 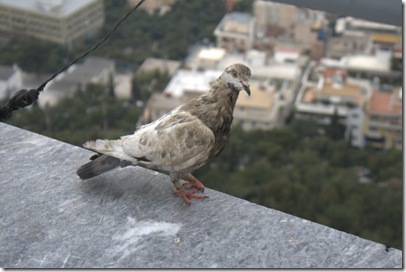 After we walked back down (we took the paved path this time and I pushed Rachel in the stroller), Jaehee and I parted our ways. She was going on to visit Plaka and I was headed back to the hotel. Rachel and I have a lot less endurance than Jaehee! We’re pretty lazy travelers right now, Rachel and I.

I stopped at a fruit stand and a pasteria on the way back, and I didn’t get lost once, a fact of which I am very proud since my sense of direction is non-existent. Rachel slept most of the way and I had quite the time waking her up in order to feed her dinner.

After that she was ready to play for a while, so we brought out her toys and her coloring book and tried to do the “normal” stuff that we do at home before we go to bed. It’s what Rachel wanted to do all day. “PLAY!” she moan from her stroller, “Play, play, play!”

She finds playing a necessity, and I guess, for a 20 month old, it is.