On Saturday afternoon we headed off to al-Azhar park for a final visit. Apparently we’re on a farewell tour of sorts—we need to find something new to do! Al-Azhar park is one of the most beautiful locations in Cairo but it’s such a pain to get to that we rarely go. 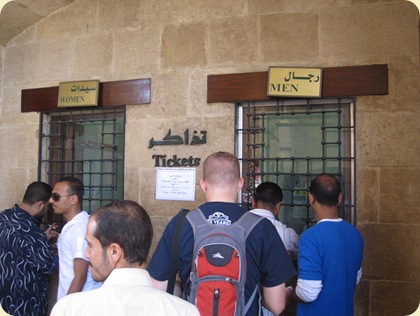 Rachel doesn’t much enjoy the playground, either, even though it’s one of the most extensive in Cairo. It’s too crowded for her, especially since everyone is always rushing over to her to steal kisses or touch her hair. Furthermore, she’s afraid of the gaps in the wood planks on the play structures so she won’t climb on anything.

But she did ask to ride on the train.

We let her since the ticket was only 50 cents and because she didn’t seem to be having fun on anything else and because it would put her behind a fence for a while, keeping her throngs of admirers at bay for a few minutes. 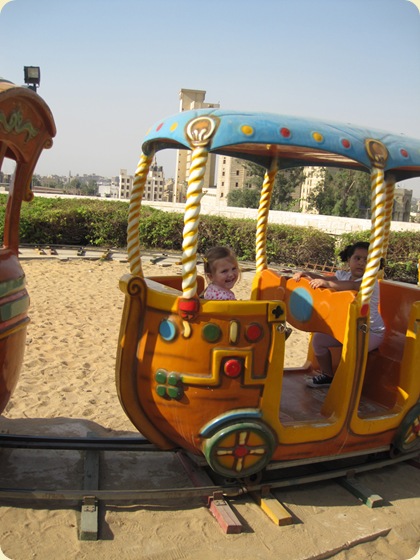 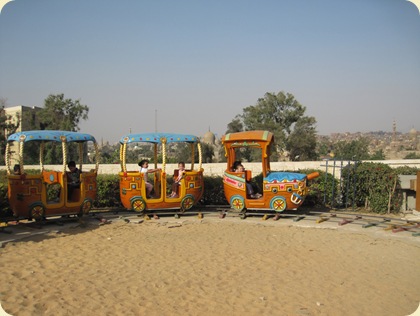 Miriam was, overall, happier than Rachel, but that’s to be expected since she doesn’t quite notice all the extra attention yet. 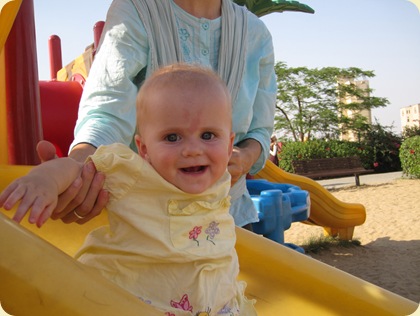 The girls had fun riding on some springy horses, after they had patiently waited their turn. There are so many children and so few things to play on that every swing, slide, and rocking horse is always in use. 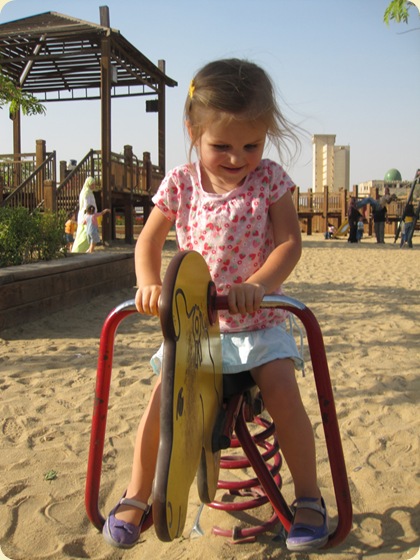 When it was Miriam’s turn on the horse Rachel helped her rock it. 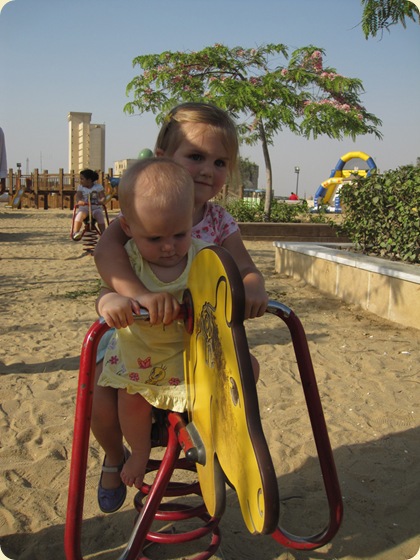 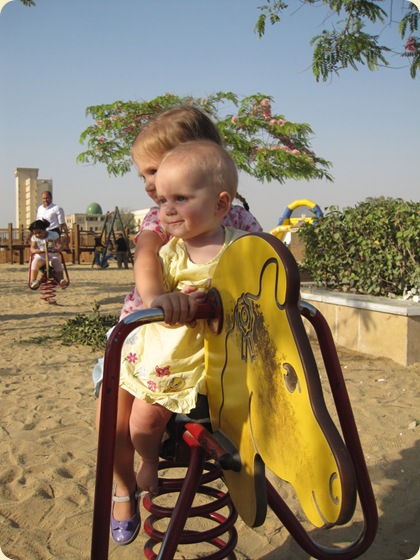 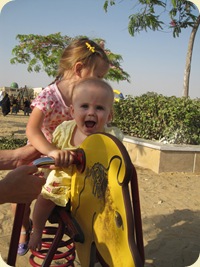 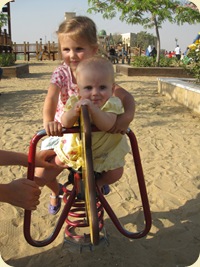 While playing on this horse we watched a disgusting display of racism, completely unsure of what to do. Some children from Nigeria or some other Sub-Saharan country were playing on one of the rocking toys. An Egyptian man came over with his daughter and started yelling at the kids, telling them that these toys, this playground, was meant for Egyptians, not Africans. He kicked them off the toy and told them that their soccer team wouldn’t go far in the World Cup. Mean, right?

His daughter got on the toy they had been playing on and they went to play on a different toy but the man kept yelling at them to get off and insulting their soccer team more.

Then the man invited Rachel to come and share the rocking toy with his daughter. We were appalled and started leaving. He yelled after us, “Stupid foreigners! Can’t understand a word I’m saying!”

We went for a walk toward the lake, stopping to romp through the fountain on the way, which is technically against the rules but it isn’t listed on the “things not to do” sign and everybody else was doing it. The guards eventually kicked the children out of the fountain but stood around watching them play for a good ten minutes before doing so. It was almost like they knew they had to kick the children out because it’s “policy” but didn’t want to kick them out because they were having so much fun. I think that was nice of them. 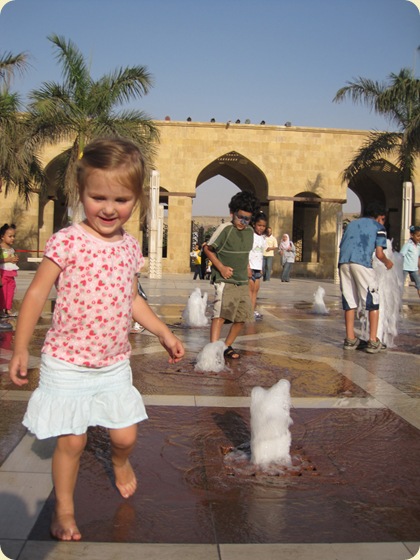 By sheer luck we found a vacant bench in the shade by the lake and stopped there to let Miriam have a snack while Rachel came out of her shell and started playing. 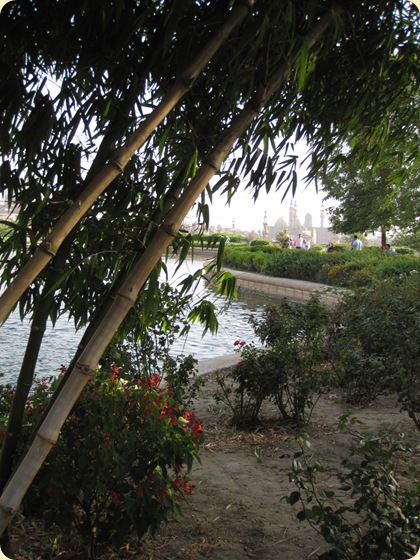 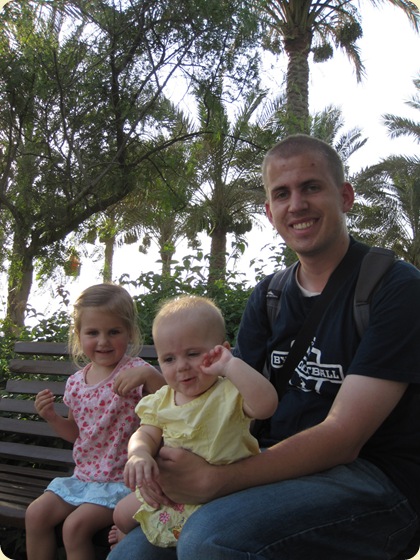 Most of the people wandering past us were couples—some holding hands, even—and they were all polite and would only casually remark about our children instead of flocking to them and demanding attention from them. Most people correctly guessed that we spoke English and made their remarks thusly. One man, though, walked past and spoke Russian, which I almost didn’t recognize as Russian since I’m not used to hearing Russian spoken with an Arabic accent. Things got crowded rather quickly once we had left our little oasis by the lake to play on the field.  We had a few minutes to ourselves before we were pounced upon. 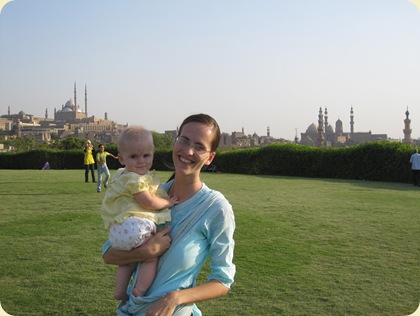 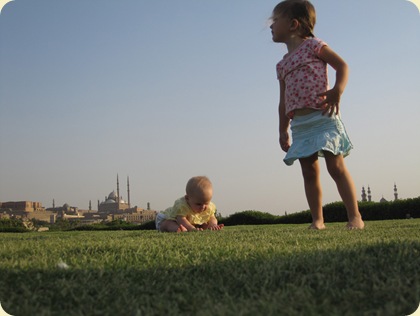 Before we knew it we were surrounded on all sides by gushing adolescent girls…and a few boys, too. They scooped up Miriam and took her away to play. 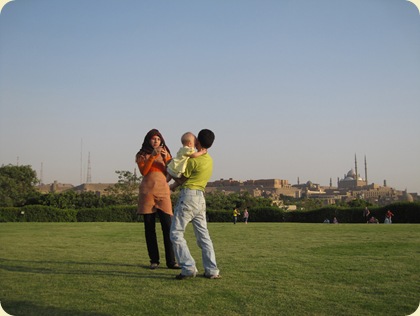 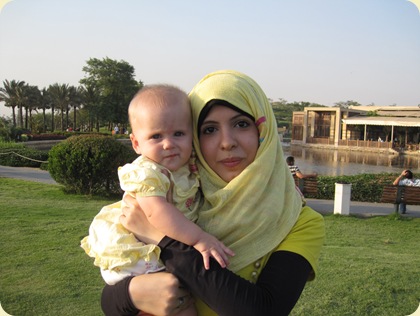 They tried to take Rachel, too, but  she rooted herself firmly on Andrew’s lap and squawked angrily at anyone who dared approach her. 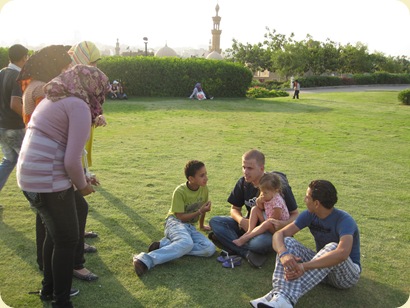 Eventually  Rachel noticed some children playing on the other side of the field. She dragged me over so that she could play with them while Andrew kept an eye on Miriam. When we got to the children, Rachel noticed that the boys were playing far too rough for her liking… 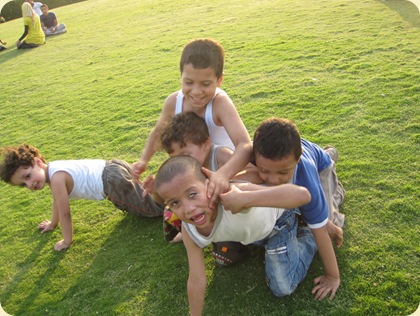 So instead she adopted a little girl, Abrar, as her friend and took her running all over the place.

“Let’s go to the lake! Come on!” Rachel shouted, grabbing Abrar’s hand and taking off toward the lake.

“Mom! What’s she saying!?” Abrar cried out desperately in Arabic.

They were quite funny together. 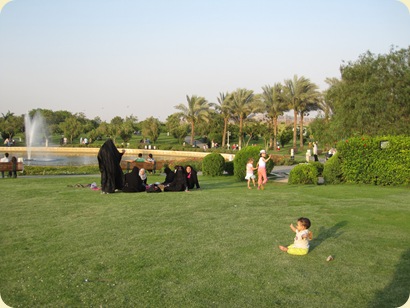 Andrew came over with Miriam after a time and we were swarmed by a bunch of young women who, I kid you not, lined up to kiss Miriam on the cheek. There were probably about fifteen of them so it was quite a long procession. I try to avoid this as a general rule, but after the first girl sneaked a kiss in there was no stopping the rest of them. By the end I was laughing.

“What’s her name?” one of the girls crooned, in Arabic.

The whole group of them erupted into awed giggles, sighs, and squeals. It was difficult to pull ourselves away from such adoring fans but we finally did and walked away listening to the crowd echo behind us, “Rachel! Miriam! Rachel! Miriam!”

That’s one thing I don’t think will ever happen once we’re back in the States.

We walked up the main promenade to the front gates, splashing in the fountains along the way and then, because the sun was starting to set, decided it was time to call it a day. 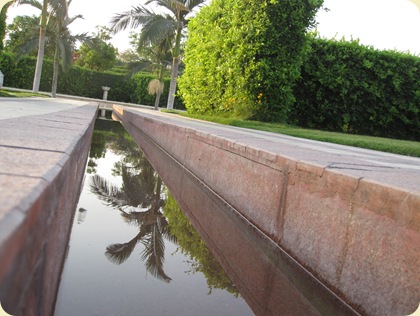 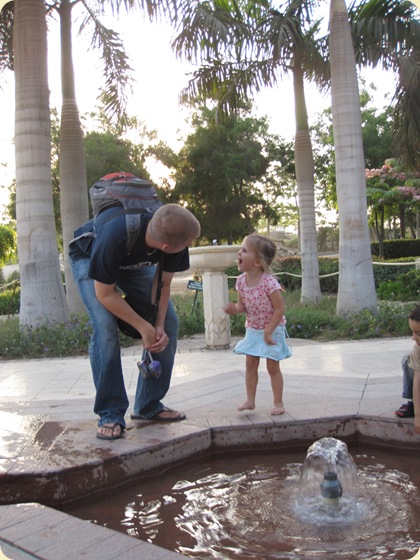 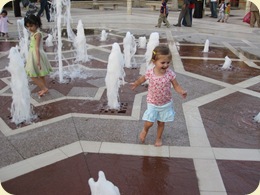 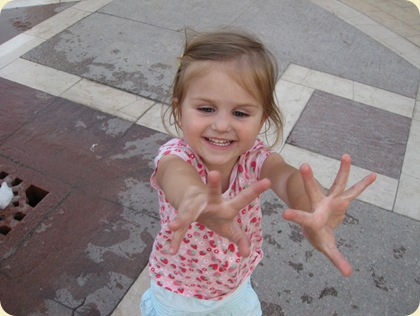 It was a great way to end our day! 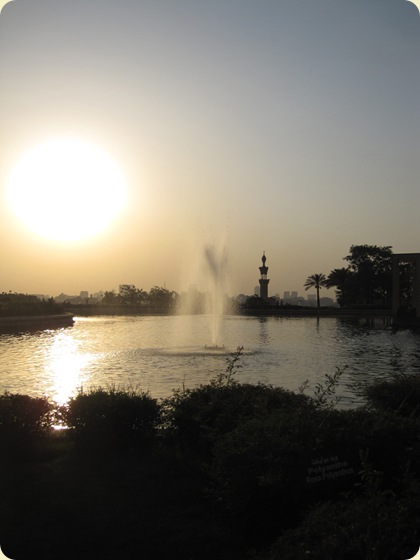