Bad guys, the captain, and other games

Rachel and Miriam befriended each other really fast. I don’t know how Bridget feels about it, but I think it’s awesome. Those two girls can colour at the table for hours and have been known to disappear into Rachel’s room all day playing make-believe or My Little Pony.

They sometimes involve Magdalena in their games as well, though this is difficult for Rachel since Magdalena figured out early on that if she tacked “my” onto whatever she was saying that Rachel would flip out.

Still, they occasionally get along. One game the three older girls like to play is Bad Guy. This happens when big Miriam and Rachel are told that they need to play nicely with Magdalena (who I am told “ruins everything.” Being a little sister is hard work.) so they initiate a hide-and-seek of sorts. While they run away from Magdalena they yell,

And then they hide somewhere in the house until Magdalena happens upon them. Then they’re up again, running away and screaming, “Bad guy! Bad guy!”

So guess what phrase Magdalena has picked up.

I don’t know if you’ve ever seen a one-year-old wandering around saying, “Uh-oh, bad guy!” but it’s quizzically adorable. So now Magdalena willingly chases Rachel and big Miriam around yelling “Bad guy!” at them.

Sometimes the girls also play with baby Miriam. More often than not she’s content to watch the others play from afar but she does enjoy some one-on-one (or three-on-one) attention every now and then.

The other day the girls were taking turns putting buckets on baby Miriam’s head and calling her “The Captain.” 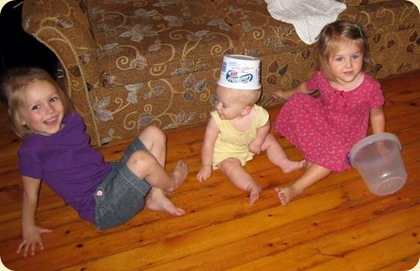 They all thought the clear bucket was funny, even baby Miriam, until someone decided to smash it down further onto her head so her nose was all squished. That ended that game. 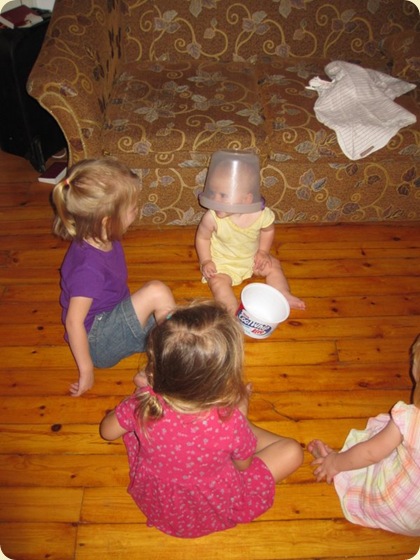 Big Miriam has been helping Rachel learn to play pretend. Rachel gets it, but not all the way. She takes everything very literally. Today they were playing library and big Miriam told her that they needed to return a stack of books to the library because they were overdue. Rachel pitched a fit and started screaming that she hadn’t read them all yet and that she didn’t want to take them back to the library.

Miriam tried to smooth things over, suggesting that they renew the books, but Rachel kept on with her temper tantrum. It took several explanations before she decided to go along with the game.

Either Rachel gets way too emotionally involved in pretend play or she doesn’t quite understand the difference yet between pretend and real. It’s still nice to have Miriam here to show her the ropes of being a big girl, though, even if it is hard for Rachel at times.

All in all we’re having a great, girly time over here!

Here are the girls half ready for bed: 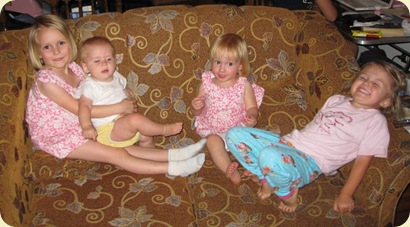 And here are the two Miriams: