Saying goodbye to the pyramids

We went to the pyramids on Monday for what is likely the last time for a long time. It’s kind of sad to think about, actually, but I’m sure we’ll be back again someday. We’ve drunk from the Nile. We have to come back. Plus, I can only live State-side for so long…

It’s interesting to see things as we’re starting to say our goodbyes. The pyramids went from novelty to annoyance to intimate in these few short years. They’ve been a beautiful backdrop for our lives. 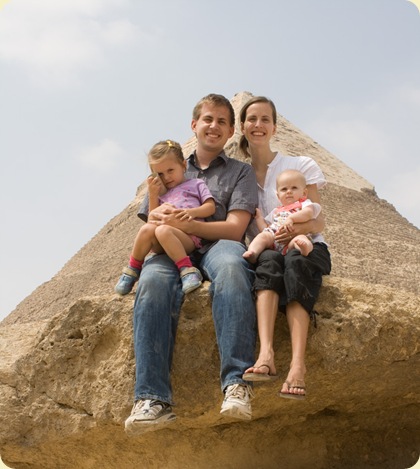 When we arrived a very kind hustler directed us to the pyramids.

“This way,” he said, majestically sweeping his arm toward the Great Pyramid.

“Oh, wait, where?” I asked, turning my back on the pyramid and searching for pyramids in the cityscape. “I can’t see them. Where are they?”

“They are here!” he said, repeating aforementioned arm gesture.

I turned around, “Oh, there! That big, huge pyramid-looking thing that takes up my whole view once I walk through the gate? That’s the pyramid?!”

“Yes, this is the pyramid!”

“Wow! I never would have found it on my own!”

I sure am going to miss playing with those guys. They’ve built up such cynicism in me. Sad, but true. I expect everyone to rip me off.

We were sure to pay close attention this time to the fences surrounding the pyramids in order to answer Vincent’s question about the fences surrounding the second pyramid. So, to answer it, the northern and eastern faces of the pyramid of Khafre are roped off. The southern face is open, but the western face has been closed off with metal fencing—like a road blockade, only for pyramids. 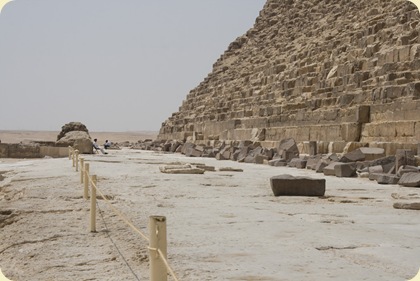 Along the way we noted some guards. I was going to describe them as noteworthy but that would have been redundant. I think the sun has fried my brain. Anyway, one was wearing a Gilligan-style sailing hat underneath his police beret. 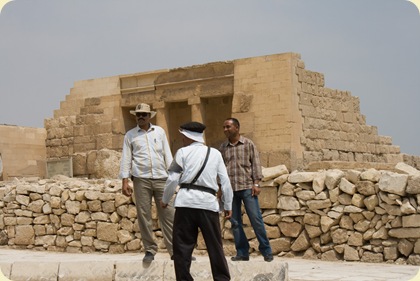 We saw another member of the Egyptian mounted police. 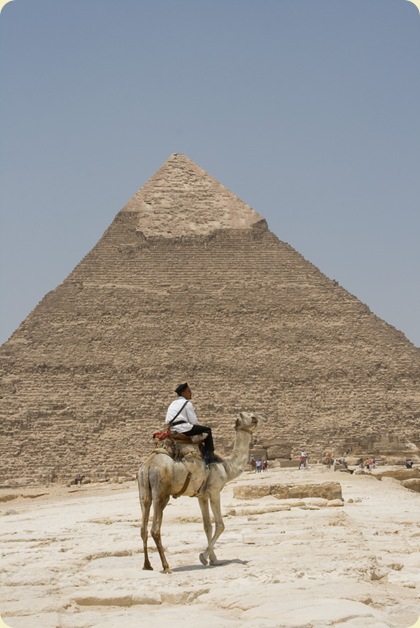 Another guard was more of an undercover guy. You can tell he was undercover by the way he sported his gun and walkie-talkie. Also because of his cool shades. And the way he camouflaged so seamlessly into the pyramid, the pyramid which is is supposed to be protecting from would-be climbers. 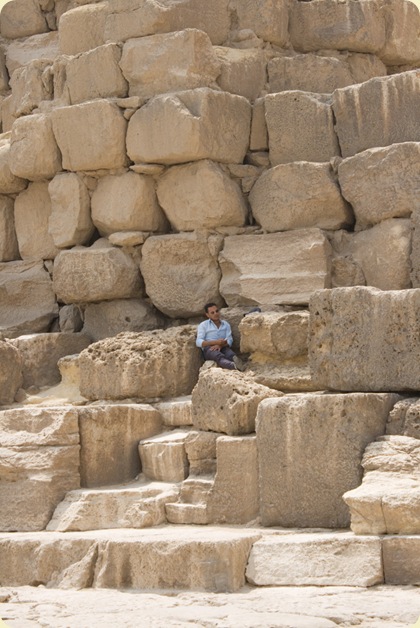 Josie, Amanda, Miriam, and I all rode camels. Andrew and Rachel have sworn off of camels, it seems. In case you were wondering how awkward it is sit on a camel while it is standing up, Andrew provided several pictures. What he didn’t get a picture of was when the man we bartered with pick up Josie to place her on the camel. I tried to stop him but he wouldn’t listen. I slapped his hands away from me and told him not to touch me and got on the camel myself. 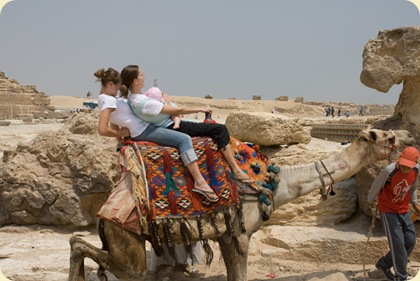 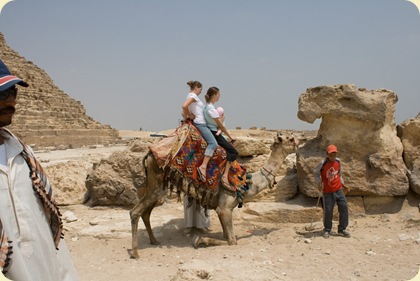 He still got his touchy-feely in for the day by stroking my leg while asking me to promise to give our “guide” a tip. Since my foot was level with his face I considered swinging it in his direction but satisfied my thirst for revenge by spitting out the words, “Don’t touch me again!”

I will never understand why they—meaning the majority of Egyptian males I’ve encountered working at tourist sites—think it is alright to touch foreign women. I mean, touching women is taboo in their culture and, actually, it’s pretty taboo in American culture, too, from what I remember. I’m pretty sure I wouldn’t let any Joe Shmoe, pardon my Yiddish, off the street stroke my leg anywhere. 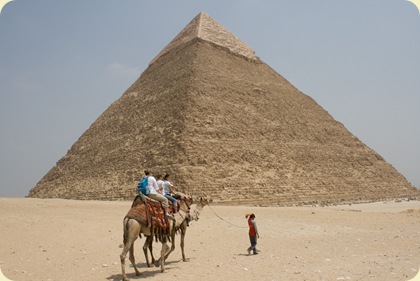 Luckily he sent us out with a boy who was probably about eight years old. He was just happy we had candy and didn’t try to get fresh once. 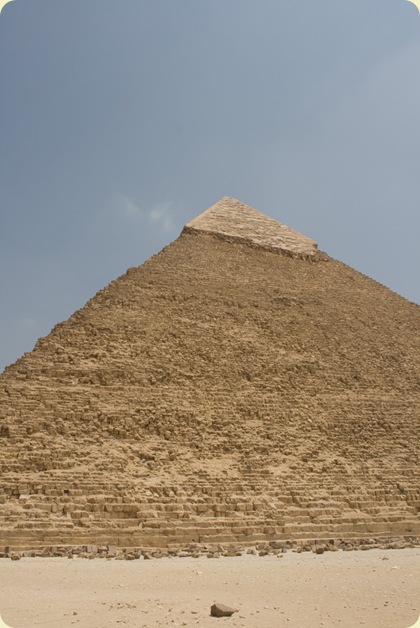 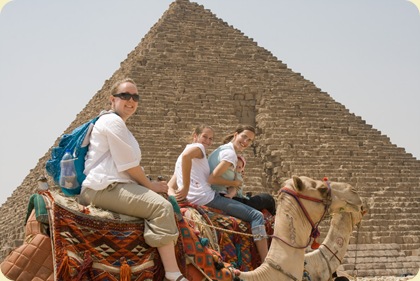 There’s nothing quite like a camel ride through the Sahara desert in the shadow of the pyramids to put a smile on your face. For trite’s sake…I should stop. I’m so tired I’m waxing corny. 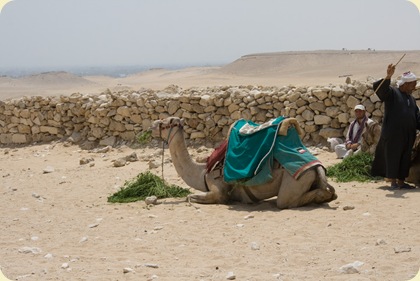 It was probably the most successful camel ride we’ve taken at the pyramids until the end when our camel didn’t want to put us down.

Camels are among the grossest creatures I know. They smell awful and make horrible grumbling noises. They don’t spit—that’s a misconception—what they actually do is expel their stomach contents. Yum. They also can inflate their palate to impress a mate by dangling it out of their mouths—it looks like a nasty cancerous legion and only serves to make a camel uglier, which I suppose in camel body language means “more attractive.” Their feet are fascinating—they only have two toes. I tried to convince my tutee to study camel feet, but it didn’t work, which is why I know all this.

This camel would not kneel down. Our guide was tugging on its rope and giving it commands, “Khush! Khush!” 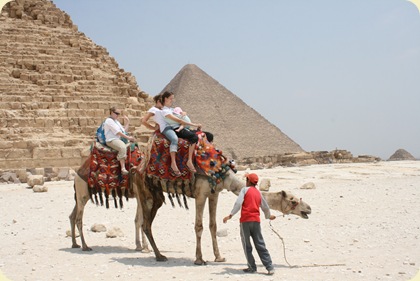 Our camel bleated and belched and locked its knees. Finally, after more tugging and “khushing” it gave in to our wishes, but not without much protest. 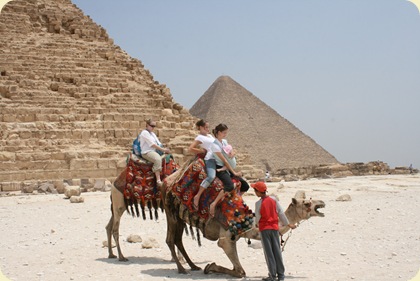 It was an angry camel. 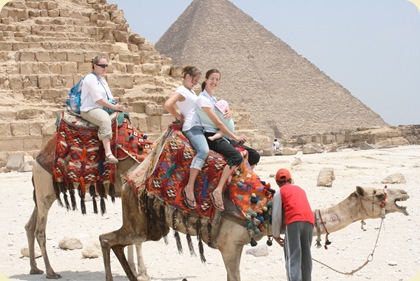 Amanda’s camel was more laidback. Not only did it have a piece of grass stuck in its teeth, but it spent a large part of our ride relieving itself. You may have heard that camels can drink a lot of water—like 200 litres or 50 gallons—per day. They also pee about that much. Holy smokes! Amanda’s camel probably peed enough to fill a bathtub.

After our camel ride I got to take over as pack-animal. Both girls wanted me, badly. So I carried them both down from the Pyramid of Khafre to the Sphinx. 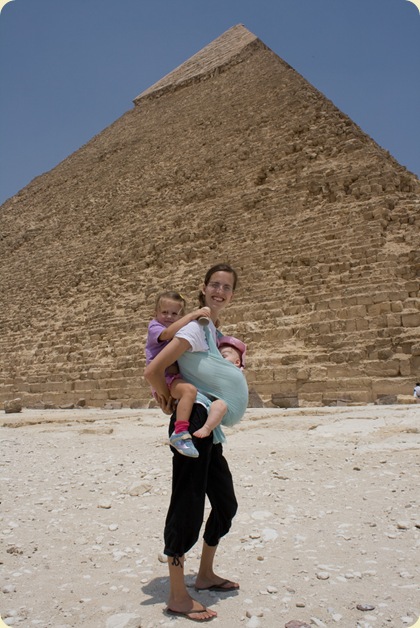 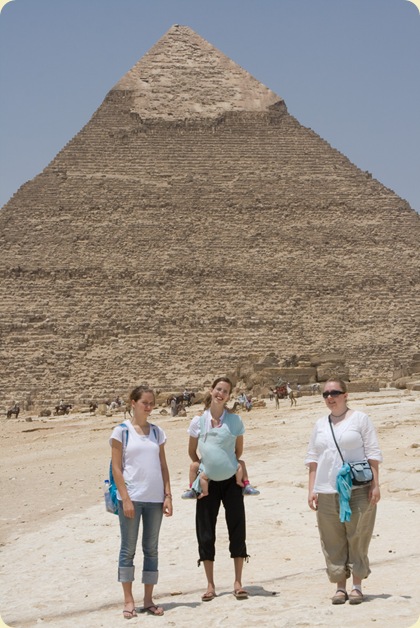 Miriam had fallen asleep and Rachel was getting pretty drowsy, herself, by the time we reached the bottom of the causeway. They were getting mighty heavy… 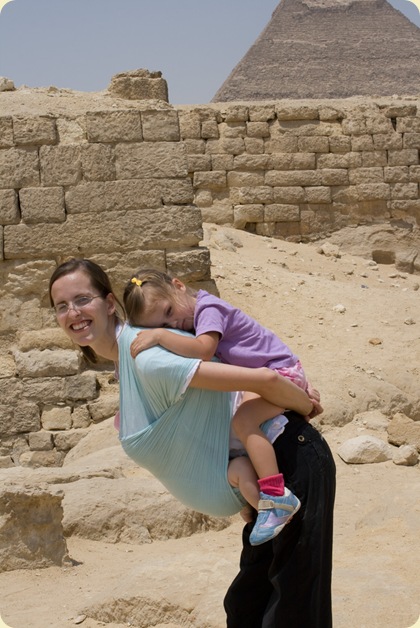 …but we persevered and walked all the way to the entrance of the Valley Temple instead of hopping the fence like this kid. 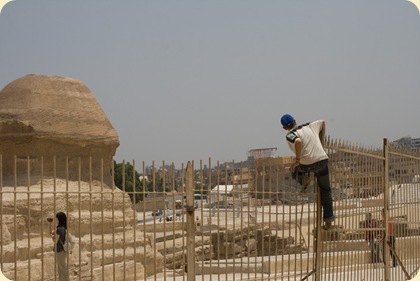 We stopped along the way to take silly pictures, though, which helped Rachel to perk up a bit so that she could walk again.

We listened to secrets… 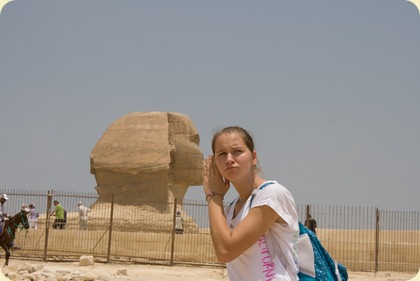 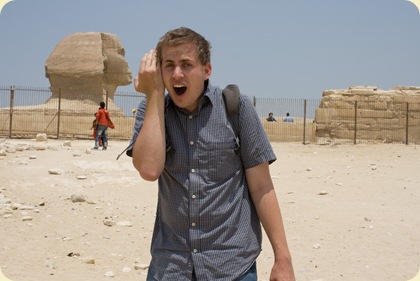 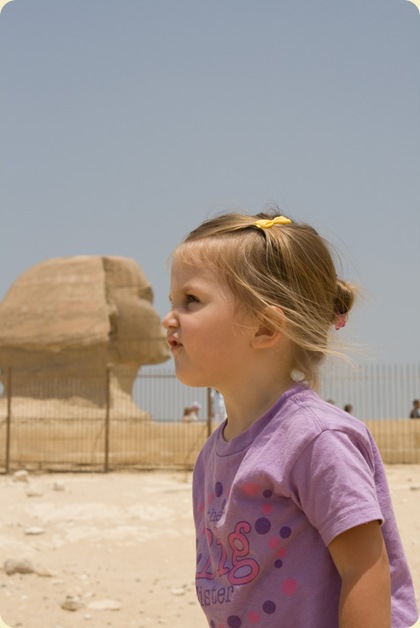 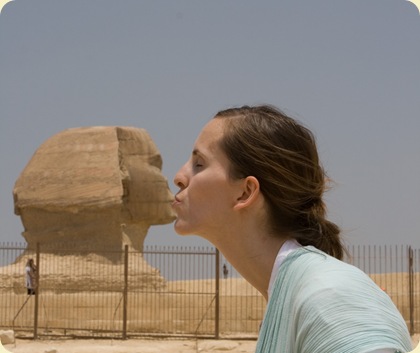 And did our best to look glamorously Egyptianified… 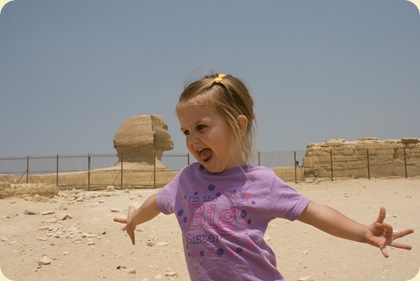 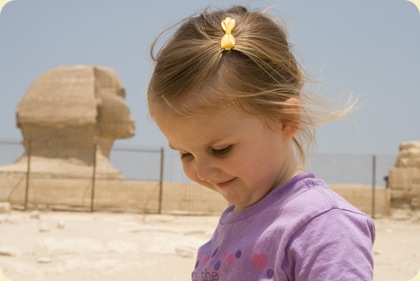 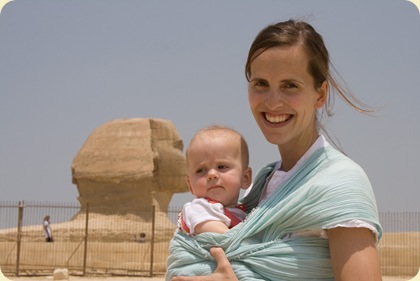 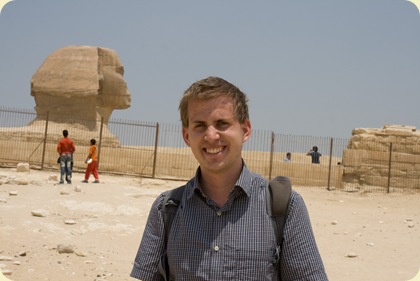 When we determined that we had done all the usual kitschy poses we moved on to a closer look at the Sphinx. It bothers me that some tourists are sold separate tickets to visit the Sphinx because no separate ticket is required. It’s included in the price of visiting the pyramids but if you take a tour they will sell you an official ticket to see the Sphinx only. I don’t understand why.

Probably because they can.

Anyway, Rachel tried walking some of the way by herself because Daddy told her that camels weren’t allowed down by the Sphinx. He had her look around to see if she could see any camels, and she couldn’t, so she happily skipped off.

I don’t know where she gets this stuff but I suppose her active imagination is reason enough to be afraid of camels.

As she was climbing up on a rock she got a big scare. 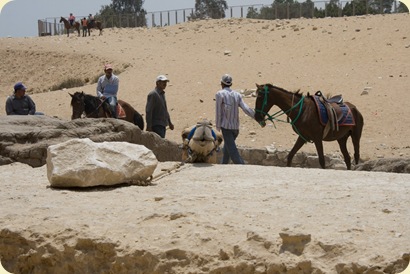 A camel was tethered to the rock and was staring right at her.

“Whoa! A camel head!” she screamed and jumped off the rock as quickly as she could. 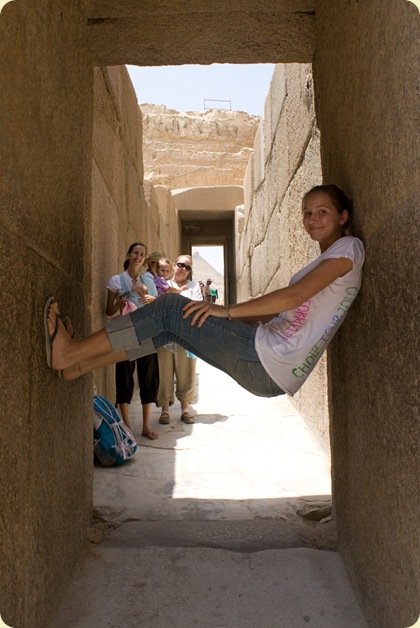 Seeing the Pyramids with Amanda was fun! She was openly enthusiastic about it the whole time. And Rachel adores her. 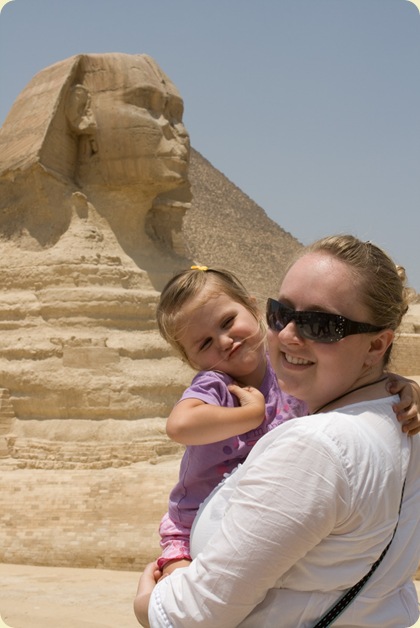 Sometimes when she accidentally calls her Panda. I think this is rather cute.

She also asked Amanda where she was from and after Amanda told her said, “Oh, I’m from Egypt. I’m an Egyptian. I’m thirty pounds!”

Going back to America will be hard for Rachel.