Forget a major breakthrough—it seems as if someone waved the “big-girl” wand over Rachel.

In addition to conquering her playground fears yesterday she also dispensed, used, and properly disposed of her toilet paper after going to the bathroom by herself. That’s the ultimate of potty-trainingness right there. She can do the whole process by herself.

She’s spent the whole day today in the basement playing with the dollhouse. By. Herself.

We’ve been reading The Lion, the Witch, and the Wardrobe (which Rachel calls Lion and the Kids) at bedtime and that’s what she’s playing downstairs. She had a bit of a conniption fit when she lost Edmund and asked for my help in finding him.

“Which person is Edmund?” I asked.

“The black one,” she answered.

I, personally, don’t mind if she calls this toy “black.” While race is a tricky issue and the skin of the toy is obviously brown, I don’t want to discourage or frighten her away from talking about race since that will probably do far more damage than good. Instead we let her use the terms she wants—although we’d probably draw the line if she started using  derogatory terms—and try to be willing to talk about the way people look. After all, she’s grown up as a minority thus far and was quite shocked at the number of “white” people that surround her now. Besides she calls the toys with blonde hair “yellow ones.” All tangents aside, I started sifting through the toy box and found a black man.

Then I went upstairs and she started playing again…or so I thought. I had just gotten to the top of the stairs when she started screaming. I ran back down to see what was the matter.

“Oh. Okay,” she sniffed and put the toy away, “But where is the other black boy? I need him!”

Apparently there’s a whole family of black people—a mom, a dad, and a boy. I had inadvertently found the dad and she wanted the little boy because Edmund is little. Duh. Peter is big.

“Where was he last?”

“He was hiding in the spare room,” she told me.

I looked in the dollhouse. There was a little black doll, Edmund.

“Here,” I handed her the doll and she started playing again.

Do you know how awesome that is? I worked for a full hour without interruption while Miriam napped. I don’t think I’ve ever done that in the history of Rachel-being-alive, ever. It was amazing. And! And she’s still playing, which is even awesomer. 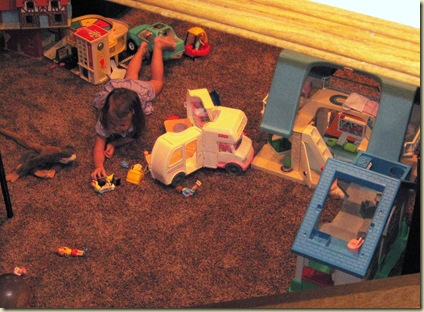 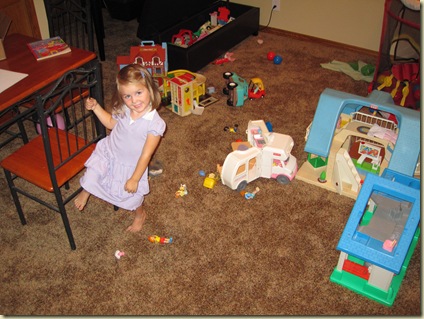 Sadly, we made a most unfortunate discovery at lunch when we began playing peek-a-boo with Miriam: Rachel can say Rachel.

For the longest time she called herself “Dacher,” which then morphed into “Dachel.” Today, however, she was clearly saying, “Where’s Rachel?” to Miriam.

It broke my heart a little but it was bound to happen sometime. She’s growing up.