August 7th was the last day of National Bowling week and we proudly participated by claiming our free game of bowling. Or…almost free. It was free up to the amount of $6, not including shoe rental and other incidentals.

We went to BYU first because they were in the list of participating alleys but when we got there we saw a sign at the front desk with a picture of the coupon we were holding that had a big X through it. Apparently they didn’t ask to participate. Spoil sports.

So we went to Miracle Bowl, instead, which was surprisingly empty. I was imagining having to wait for a lane to open up but instead we just waltzed right in and got to play right away, which is a very good thing because when you’re bowling with a three-year-old (and the ball takes five minutes to get to the pins after leaving her hands) one game of bowling takes a lot more time than it used to.

It ended up costing us $8—and only Andrew and Rachel had to rent shoes because I have my own. I’m telling you, that’s the most expensive shoe rental I’ve heard of! Still, $8 for three of us to bowl isn’t bad and we had a lot of fun even though we all bowled rather pathetically. Andrew scored a 95. Rachel got an 85. I brought up the rear with a lousy 81. Seriously. I got beaten by a three-year-old using a plastic dinosaur ramp and bumpers. Although I didn’t use the ramp we couldn’t figure out how to turn off the bumpers so Andrew and I used them, too. And still bowled horribly. Oh, well. As I said, we still had fun. 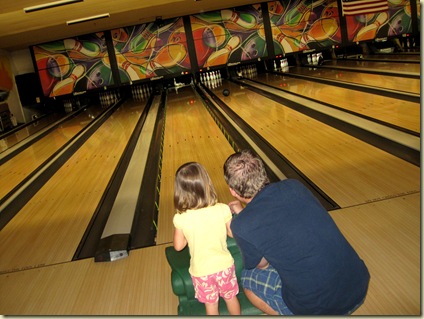 Rachel was so excited when she got a strike. She ran over to tell me that she knocked all the pins over. 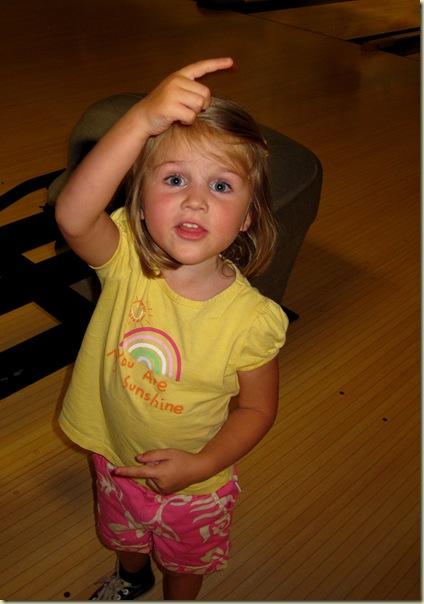 Miriam was our unwilling cheerleader. She did alright for the first few frames but after a while decided she only wanted me and got really antsy whenever it was my turn. She wasn’t the world’s happiest baby but she wasn’t too grumpy, either. Just needy. 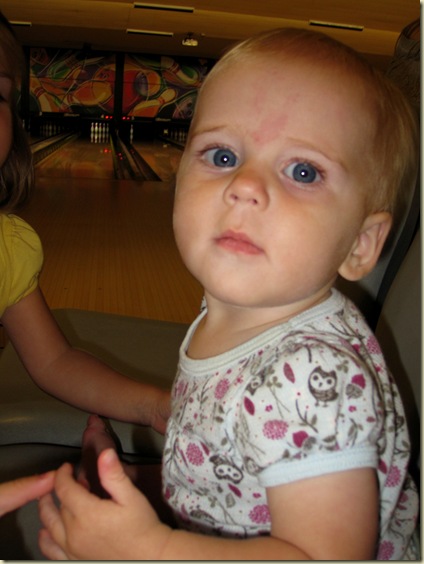 After our game when we were in the car, buckling up, one of us said, “Wasn’t that a fun activity?”

“Oh, tonight’s not family night. It’s Saturday. This was just for fun.”

Our impromptu lesson was that when everybody’s happy everybody has a good time but when one person decides to not be happy it’s hard for everyone else to have a good time so it’s our responsibility as family members to always try to be happy. We talked about how Rachel had a good attitude the entire time we were playing and how much fun she had had and compared it to other times when she had decided to throw massive temper tantrums instead of participating. 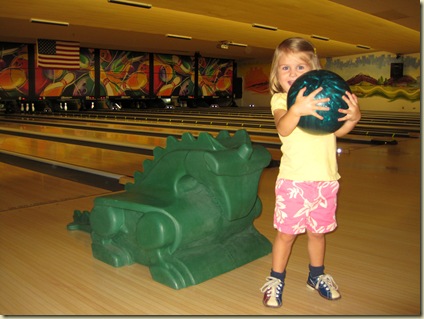 “But you can’t have fun if you lose,” she told us, sagely.

We reminded her that she hadn’t won, which made her a loser, and that Mommy was the biggest loser of all, but we were both still happy because we had fun. Trying your best is important, but the most important thing is to have a good attitude, yadda, yadda, yadda. It was a good talk but I have a feeling we’ll be visiting this theme several times in the near and distant future.

In the mean time we probably need to polish up our bowling skills. Not breaking 100? Shameful, folks. Shameful.