I still feel guilty for writing about anything else when people are being shot at, run down, and beaten up. The world is still spinning but somehow I'm stuck on #Jan25 and even though the future looks grim and unbearable I can't look away. Here, life seems surreally calm.

The birds are singing and Miriam is rather excited about it.


Miriam loves to look out the window—there are so many exciting things to see outside and since she rarely goes outside anymore since it's freezing the window is her world. She likes to watch the garbage truck empty the trash, she knows the sound of a car and will point to the window when she hears one, demanding I open the blinds, screaming, "Ca! Ca! Ca!"

Today we opened the blinds and saw dozens of robins enjoying the final pickings from the Callery Pear tree in the front yard. 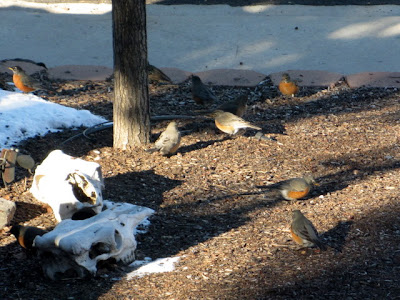 I was rather excited when I saw the flock of robins, myself—robins are, after all, migratory birds so seeing them made me think fondly of spring. Unfortunately, upon researching this hope further I found that not all robins choose to migrate. Some of them (the crazies) choose to stick around all winter long.
Since it was still snowing in May last year, I'm going to assume this is not a sign of an early spring.
Shucks.
It was still fun to watch the robins forage for food while Miriam squealed, pounded on the window pane, and tried desperately to say "Bird."
"Buh! Buh! Buh!"
She reminds me of Bambi.
That movie always gave me nightmares.
Despite the serenity of the morning my twitter feed is rife with news of Egypt. The bad is bad, and even the good news is hard to hear. I still can't quite wrap my mind around what is happening over there, in places I've been: Tahrir, Alexandria, Suez. In spite of all my efforts I find myself worried about Andrew when he's gone and rejoicing when he comes home. I know he's only going to school. I know that. And yet I can't help but imagine what our life would be like if we were still in Cairo.
How would I ever keep that boy inside?
I just know he'd go off to sneak a peek at the protests, acting the part of a civil journalist, or join a street militia like our friend Mark, a soft-spoken cleric who is now pulling over military trucks and demanding to know the intensions and see the identification of the passengers.
It seems my mind is in Tahrir while my body is here. It seems impossible that my world is so quiet when I know theirs is not. All night long the peaceful protestors have been under siege by "pro-government" mobsters, paid off to hurl bombs at innocent people. Enough fear has swept through the nation to rift the people with fear; they want Mubarak back; they want stability; they want peace. It seem Stockholm syndrome has gripped a large part of the people—they want to believe the false promises of their government, the promise that their government is willing to make changes, to work with those willing to work with them. In reality, it's likely that if the people concede now all they will get is punishment.
It's a dire situation, really.
I couldn't help but reflect on one of my favourite poems, In Flander's Fields, this morning while realizing how lucky I was to be watching robins hop about with my baby when the chaos created by thugs in Tahrir Square has separated children—babies, really—from their parents. Just last night a two-year-old was finally reunited with its parents after being separated the whole day!
Anyway, the line that popped into my head was "the larks, still bravely singing, fly / scare heard amid the guns below." So many creatures—human and animal alike—are oblivious to the horrible things that are happening, but that's kind of the point of the poem, I think. Regular life is going on for everyone else, but it doesn't have to be that way, and shouldn't be that way, because if we are willing to "take up the quarrel with the foe" then those who died haven't died in vain, not if, in the end, we achieve the goal of freedom.
And so, I offer to you my quick imitation of In Flander's Field:
In Tahrir Square the people fight
For freedom, truth, and human rights
We all should have; While here I sit
And watch the robins peck and flit
Not knowing what went on last night.
How many dead? We'll never know.
The guns, the knives, the bombs aglow
Seek and will seek to thwart hearts knit
In Tahrir square.
Take up their quarrel with the foe:
To you from failing hands they fling
The torch; be yours to hold it high.
If ye break faith with those who die
They shall not sleep, when silence rings
In Tahrir Square.
Posted by Nancy at 2:12 PM