Last week, I had Emily and Esther over. We went to Russia together in 2004 to teach English; in June of this year we will have been home for seven years! It's funny to think that seven years ago we had all just met and were still getting to know each other. We were all young women, lost in a foreign country. We had our share of adventure, to be sure, and several misadventures as well.
Seven years later and we've all gotten married, though some of those marriages have, sadly, ended. Between us all we have eight children—we had half of them over at our house on Friday! 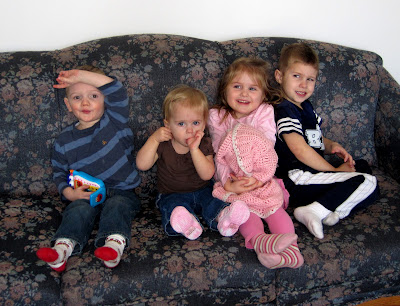 I know some more little ones are due to make appearances this year, so soon we'll be outnumbered.
It was so fun to get together and reminisce about our time in Russia, the people we met there, and our travels through the Baltics. It was fun to talk about Stephanie, Staci, Michelle, Natalie, and Tiffany, too—in a good way...like laughing about stories they've shared on their blogs and sharing tidbits of their current events that not everyone knew...like Staci, you moved back to Arizona!?
How much fun would it be to get all those girls back together again? Way too much fun!
I took a special picture of Rachel and Emily together. Emily crocheted blankets for both Rachel and Robby (he's the little guy just to the right of Rachel in the other picture) before they were born in 2007 (Robby in April and Rachel in July). She brought them up to Utah from Nevada when she came up for a visit (her in-laws are from Utah, luckily enough for those of us who live nearby and get visits, too). Rachel took to that blanket like nothing else. It's a little stretched and worn and faded by now, but that just emphasizes how well-loved it is. She can't go to bed without it.
Rachel has only ever heard stories of Emily, "the girl who made your blanket." She's had a lot of questions about Emily over the years (Did she make the blanket because she loves me? Did she know pink is my favourite colour? Did she make it in Russia? Did she give it to me when I was in your tummy?) so I think it was nice for her to finally put a face with the name, and meet the blanket's maker.
Sometimes when I think about Russia I'm a little sad that I didn't get to spend more time there. I also wish that Andrew would pick up some Russian so that we could speak it around the house more. I'm just not fluent enough to pass much in the way of language to my girls, though Rachel is plenty fluent with the phrase, "Быстрее!"
If you ask Rachel what it means, she will tell you: "Go faster!"
I use it a lot because: that. girl. is. a. snail.
On the way to school: "Быстрее, быстрее, быстрее!"
Cleaning up toys: "Быстрее, быстрее, быстрее!"
Eating lunch: "Быстрее, быстрее, быстрее!"
Clearly I still need to acquire some patience, but come on!
Aside from telling my daughter to get a move on it, I keep up my Russian by taking a Russian hymnal to church and singing loudly enough to confuse everyone around me. I lose that hymn book on a rather consecutive basis—at least every other month—so it's a bit of a pain but I think it is worth it because if I ever need to say, for example, "There is a green hill far away..." well, by golly, I can say that. Also, the look on people's faces when they realize the words are not in English after trying to share with me is priceless.
Seriously. I've had people sit beside me, grab half of the book, fumble along for a few lines and then go, "Oh...that's not English..."
It's so funny because it's never an immediate realization. It's always like three lines through the song.
It also just keeps me thinking in Russian, so when my little sister asks for help with her Russian homework I am able to actually say something to her instead of just blinking blankly.
I miss Russia. I would go back in a heartbeat and I'd drag Andrew kicking and screaming the whole way. It's not that he's not interested in Russia. It's merely that he is so much more interested in the Middle East that diverting his attention elsewhere is like trying to convince him to eat broccoli.
Anyway, it was so nice to see these girls. It's been far too long since we saw each other—it was actually just after Robby was born, so almost four years! Thanks for stopping by, girls!
Posted by Nancy at 2:20 AM