Our first stop of the day was Bear Country. Rachel was pretty excited about this; she still remembers the trip we took to Bear World last year (most importantly that she got to kneel on her car seat instead of sitting down, buckled up) and she was excited to see the animals again (and most importantly to kneel on her chair so that she can see out the window—we live life on the edge...when we're going 2 miles per hour).
I was quite impressed with Bear Country. We saw many, much elk up close and personal. 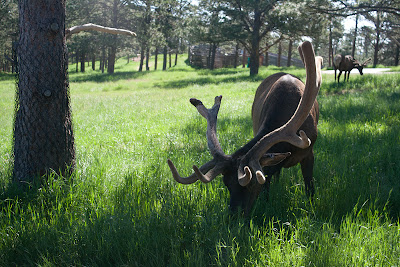 It was funny to watch them all crowd around the food trough—their antlers are so big that they kept getting tangled up with others' antlers and they'd have to tilt their heads sideways to eat so that they could all fit around the trough. I'm glad I'm not an elk. Those antlers look awkward and heavy. 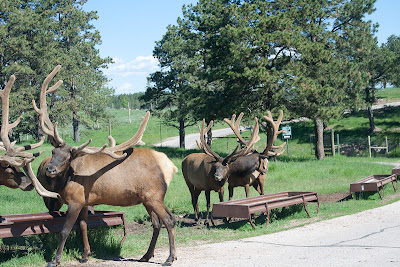 The reindeer were still working on shedding their thick winter fur so they looked rather mangy. 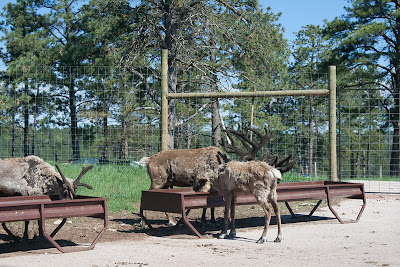 The bear enclosure was amazing. I'm not even kidding. There were so many bears. When we got to the cattle guard (which apparently works just as well on bears) there were two bears pacing back and forth in front of the gate like they were guarding it. 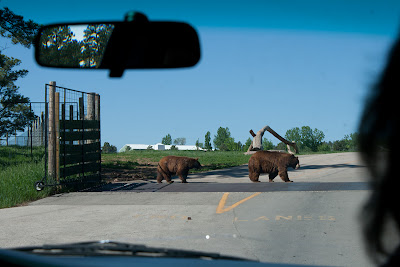 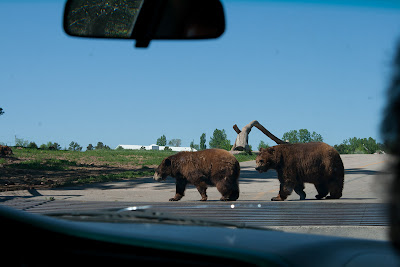 I wasn't quite sure they were going to let us in, but they did. 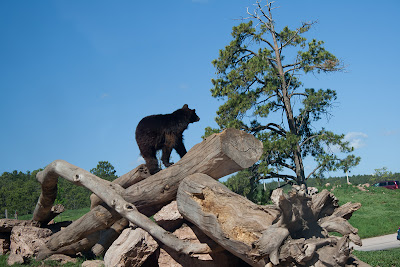 The bears were pretty active—they were climbing on things and scratching their backs on tree stumps and frolicking around in the fields, not unlike Disney's Baloo, the bear. Way up there on the right of the cars is a bear just shimmying on a pole, trying to get that pesky itch. By the time we got up there he'd apparently reached the itch because he was gone. 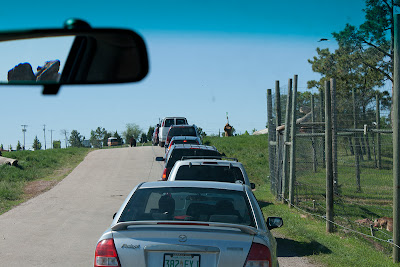 But! We saw plenty of other bears. 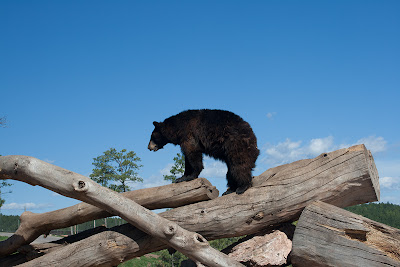 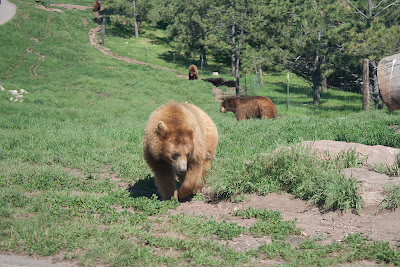 We also saw some cougars and buffalo and other big animals. 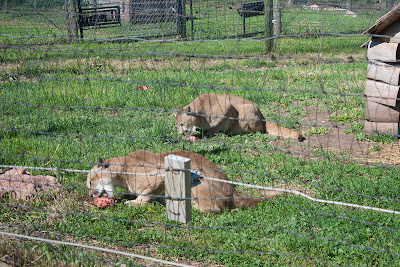 Our favourite part, though was Babyland. At the very front of Babyland was an enclosure for the grizzly bears. 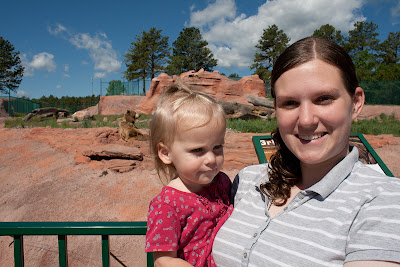 Rachel was rather disappointed in them (because they weren't babies!) but then when we were walking one of them started walking next to her (only on his side of the trench) and she was convinced that she had trained him so she kept turing around and saying, "Here, boy! Come on! Follow me!" 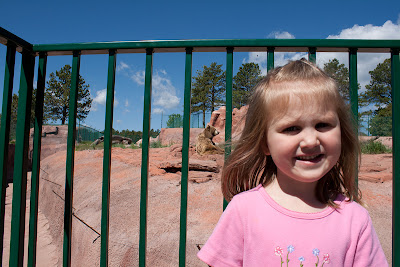 I asked her if she knew that he could eat her. She said, "Well, yeah, but he can't through this fence. Besides, this bear is my friend!" 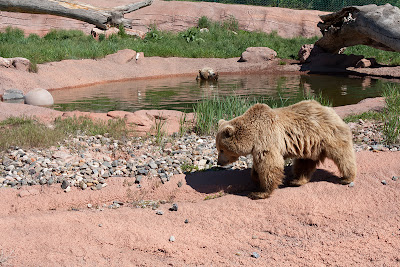 Nice, grizzly...
The baby bears, though! That was really something! 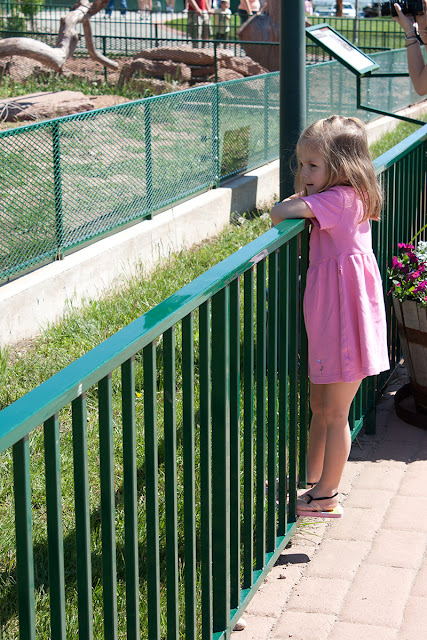 There were probably twenty baby bears, all about three months old, running around together. I think my heart melted at least a dozen times. 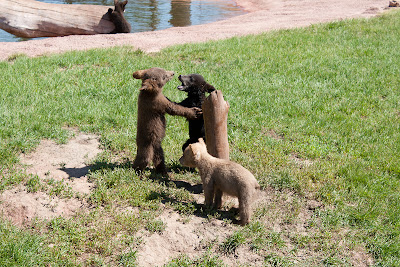 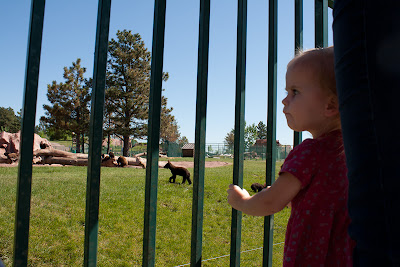 So instead of separating the mommas & babies from the daddies they separate the babies from both their mommies and daddies. I think that's a little cruel considering bears have been known to suckle for over a year, so to be tearing mothers and babies away from each other at three months seems a little harsh. But they are in captivity and they need the bears to keep breeding so they can have more bears (and we saw a little bit of breeding going on in the adult enclosure—it's nature...ish) and I guess you can't really do that when you're nursing/taking care of a cub. 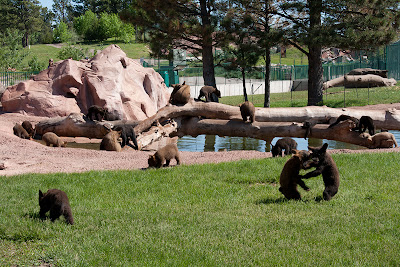 At any rate, the cubs were adorable. They kept picking fights with each other, pushing each other into the water, and chasing each other. They were have fun. 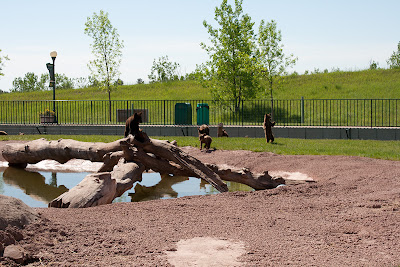 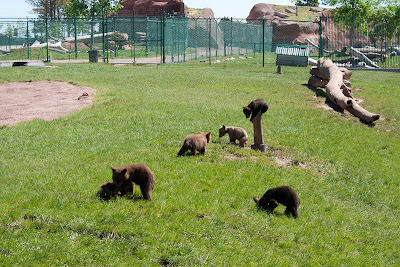 Rachel wanted to take a baby bear home with her so badly. We had a hard time peeling her away from their enclosure. 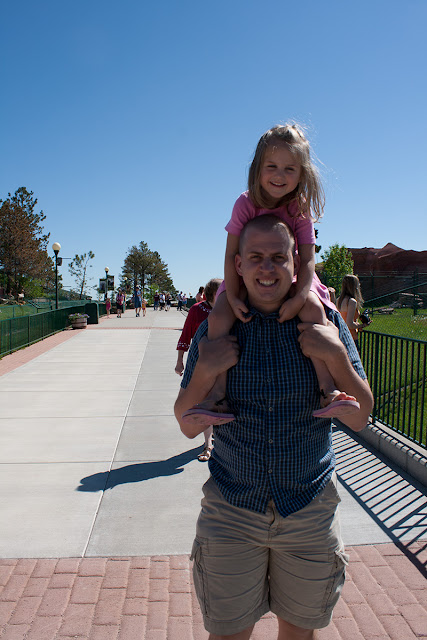 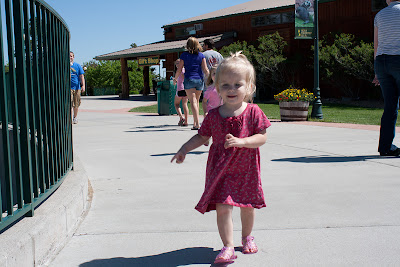 We made a stop in the gift shop, though, and Grandma was kind enough to let both Rachel and Miriam pick out a (stuffed) baby bear to take home. 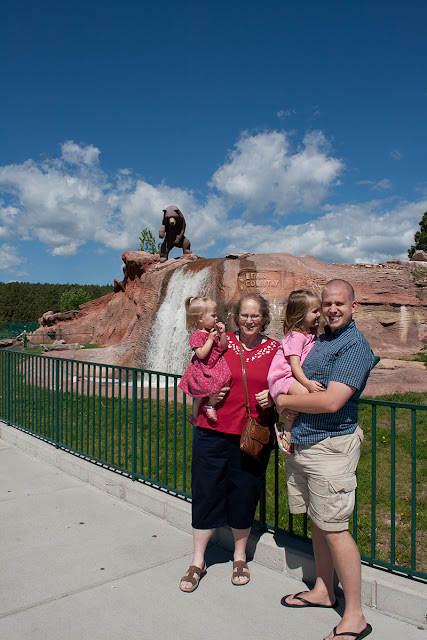 There were really big stuffed bears that you could purchase for $800 but the girls selected theirs out of the $8 bin. We had to fit them in the van, after all, so as much as Rachel would have loved a big bear (for five minutes) we convinced her to get a small bear. 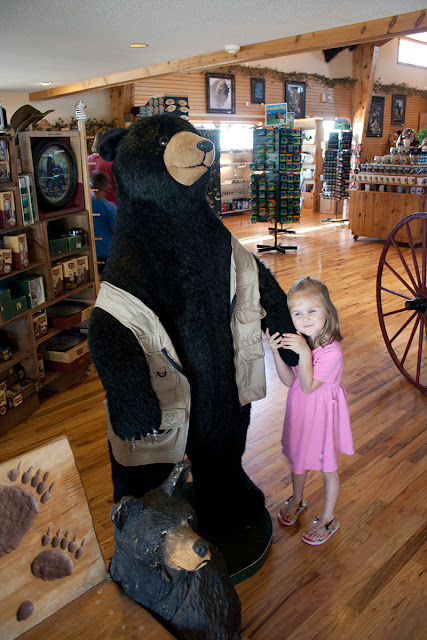 There were a couple of statues outside that we let the girls climb on to get some (more) of their wiggles out before loading them back into the van. 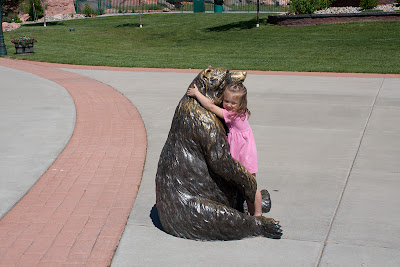 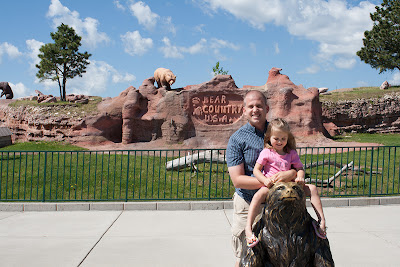 When we finally did manage to wrangle them back into their car seats, Miriam started kissing her knee.

Finally curiosity got the better of me and I asked Miriam what she was doing.

"Owie," she explained and pointed to her knee.

It was all scraped up and was bleeding all over the place. She was kissing her knee better; that's supposed to be my job but I hadn't even noticed her fall over!

Luckily Grandma had a bandaid in her purse (because I had brought bandaids but packed them in the suitcase...because that's useful) so we had Miriam fixed up in no time.
Posted by Nancy at 12:07 AM