Final presentations and the end (May 11)

After a fitful sleep last night (I was still completely stressed out by this presentation. I don’t know how I can convey the extent of the data that we weren’t able to collect or the lack of any tangible conclusion or recommendations for the PEF), the three people in my team that were chosen to give the actual presentation (me, Talia, and Hugh) woke up early to run through our PowerPoint a few times during breakfast.

We were scheduled to present to the PEF missionary couple, the head of the Employment Resource Center (ERC), one of the heads of PEF, and possibly Elder Sitati, a member of the Area Presidency (and member of the 1st Quorum of the Seventy) at 9 AM at the area offices in the temple complex. A few of us left the hotel early so we could get everything set up—they were supposed to provide a projector for the laptop, so we wanted to make sure everything was set up and ready to go.

When we got to the area office at 8:45, the receptionist was totally confused. None of the people we were supposed to meet with were there. One was in Sierra Leone. Elder Sitati had just started a morning-long presidency meeting. The PEF missionaries and the ERC head weren’t in yet.

The rest of the group came at 9, surprised to see us waiting in the lobby. We got their cell phone numbers from the receptionist and tried calling, but nobody answered.

So we waited some more. A lot more.

At 9:40 the PEF couple walked in, surprised to see us. They informed us that they had scheduled the presentation for 10 AM, not 9, but that they had also scheduled another appointment for the same time.

Our audience was quickly dwindling down to nothing.

At 9:45 the head of the ERC came and we decided to go ahead with just him and the missionaries. The only projector in the building was being used by the Area Presidency in their meeting, so we put a laptop on the pulpit in the chapel and started the presentation for our audience of three (plus the rest of our study abroad group). 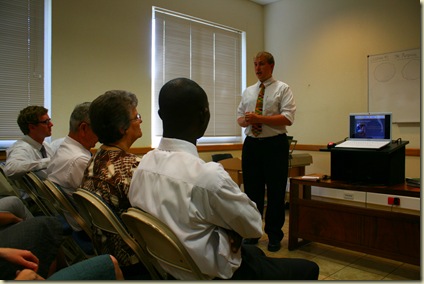 Five minutes into our presentation a whole bunch of missionaries walked into the chapel, led by a mission president and his wife. A missionary zone conference was scheduled for 10. We filed out of the room, moved upstairs to an empty conference room, repositioned the laptop on some kind of metallic stand, and continued with the presentation.

The actual presentation, not counting the room change and technical problems, went pretty well, especially considering our last minute scramble last night (and the whole lack of any interesting findings). However, once we finished, our audience reacted with what seemed to be a giant “meh.” The ERC head told us that our research confirmed everything he had already known, and the PEF couple asked a few precursory questions before ending the brief post-presentation discussion.

I left the area offices feeling a mixture of relief (we were done!) and total disappointment (our project had been a waste of time that nobody was interested in).

The IDE team’s presentation had been rescheduled from 11 AM (right after ours) to 4 PM, so we had a bunch of time to kill. We drove out to a low key art market near the airport for some final extended tourist shopping. This market was far more navigable and less pushy than the art market we visited on the first day here, which meant that everyone got cheaper prices with far less haggling and fake tears. We spent probably an hour and a half bartering and hanging out at the market before heading off to lunch at the nearby mall.

After 16 days of chicken, rice, and plantains, I’ve decided that I’m done with Ghanaian food. Thus, in keeping with my final boycott of local food (and maybe as a way to drown my disappointment with the presentation this morning), I had a deliciously healthy lunch of french fries and strawberry ice cream. Yum.

Earlier this morning, while we were waiting for our presentees to show up, the two professors on the trip went out to find the Area Presidency’s offices to see if Elder Sitati would be coming. They met with him briefly in the hallway and told them that he was busy all morning, but that he would have time to meet later this afternoon at 2. We didn’t want to redo the whole presentation just for him (he didn’t have the time; we didn’t have the energy), so on the way back from lunch we stopped at the temple compound again to drop off a small contingent of our team (me, Starlee, Sam, Dr. and Sis. Agle, and Aaron) to meet with him while the rest of our group went and chilled at the hotel (and made final preparations for the IDE presentation at 4).

I wasn’t too excited initially about going over our research again, even if it was with a cool Seventy. I wanted to go back to the hotel and sleep off this morning’s botched presentation, and I wasn’t alone—nobody in our team wanted to go. After I finally decided (while the bus was idling outside the entrance of the area offices), I convinced Starlee and Sam to come along, both of whom were equally less than enthused.

We took the elevator up to the top floor and were escorted into the beautiful wood-paneled area conference room to wait for Elder Sitati to come. He came in and looked genuinely happy and excited to see us. After we introduced ourselves, he turned to Aaron and asked for a summary of our findings and our recommendations. Aaron then turned to me and told me to go ahead and explain everything. That took me totally off guard. I was expecting to sit there passively and take in the whole brief meeting—I was presented out.

So, with Elder Sitati staring at me expectantly, I explained our project, findings, and recommendations. He started to get excited and stood up to draw some charts on a huge pad of white paper on an easel, giving us super clear information that would improve our final paper—explaining it with amazing clarity.

Our key recommendation was that the PEF gather its own database of job placement rates and vocational and educational needs in the different regions of Ghana. Elder Sitati had thought of a similar idea a couple weeks ago but hadn’t articulated it to anyone yet. He told us that our findings confirmed what he wanted to do with the PEF and got even more excited about our report and research. The MPA program will probably work closely with him so that next year’s Ghana trip will be able to begin implementing our recommendation. He thanked us for our research and told us that it was exactly what he was looking for.

Our 30 minute meeting with him was exactly what I needed to end the funk of disappointment from this morning’s meetings. Although our first audience seemed to not care about what we had done, the head of the PEF in West Africa loved it and had his impressions and ideas (and inspiration) confirmed through us. Despite all our misgivings, we had done what we were supposed to do.

It was an incredible meeting and I’m so glad I decided to go, even though I didn’t want to. Sam and Starlee felt the same way. We are now all totally pumped about what we’ve done. Thank you, Elder Sitati!

The bus came and picked us up from the temple and we headed out to IDE for the other team’s final presentation on vegetable market trends, which went really, really well.

After their presentation, we drove back to the temple (it’s like we’ve hung out there all day or something :) ) to drop off anyone who wanted to do baptisms or a session. I had planned on doing another session, but at the last minute (once again) I decided to do baptisms instead. I hadn’t done baptisms since Nancy and I were engaged… back in the fall of 2005.

Doing baptisms in the Accra temple was completely different from doing them at Mt. Timpanogos or Provo. Because it’s a mini temple, there’s a minimal staff of temple workers who are usually involved with endowments. Baptisms are a strictly a BYOTW1 affair, which is actually really cool. We all took turns confirming, witnessing, and sitting while doing confirmations, and when we went out to do baptisms, I got to be the recorder (and move the names through the cool projector thing… something I’ve always nerdily wanted to do :) )

We had the entire font area to ourselves for most of our time there, which was also way cool. Official temple workers came in only once to have us baptize and confirm an older deaf Ghanaian who had just joined the Church and who was being baptized for his father. After Matthias baptized him, the temple worker brought a chair to the side of the font so we could confirm him right away. Way cool.

After we all changed back into dry clothes, we visited with Bro. Acquah (of Cape Coast fame) for a while in the temple lobby (since he’s a temple worker) before leaving the temple compound for the last time and going back to the hotel. The Accra temple is an incredibly beautiful building and I’m going to miss driving by it so often (it’s been nice having our main hotel so close—only a 5 minute walk).

When we got back to the hotel, I decided to skip dinner (still boycotting Ghanaian food…) and went up to my room to keep working on the project. Even though we finished the presentation, we have to send them an official written report in the next couple weeks, so technically we’re not quite done with this whole PEF project yet. But we’re close, and with the incredible meeting with Elder Sitati today, we’re definitely on the right track.

Addendum: After attempting to work on the project, I gave up and started packing instead. Later that night we had a group party in one of the hotel conference rooms, complete with loud music, Fanta and Coke floats (with the ever versatile bagged Ghanaian ice cream, Fanice), and played some intense Ninja Destruction, which I had never heard of, but which is apparently really popular up at BYU-Idaho. Some hotel workers saw us playing and partying and totally joined in. So cool.

We left for the airport early the next morning, bringing this incredible 17-day trip in Ghana to a sad end. I absolutely loved being in Ghana! 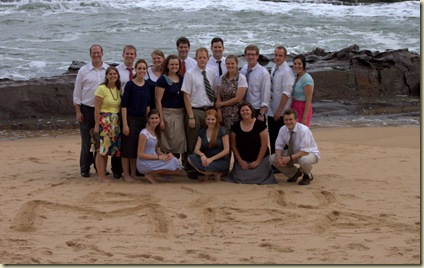