I spent a quarter of a century without ever having been to Yellowstone. That's a long time because a quarter of a century is equal to my entire life. I almost feel like Yellowstone is Disneyland or something because when people would say, "So, in Yellowstone blah, blah, blah..." and I'd say, "Oh, really. I've never actually been to Yellowstone. Everything I know about Yellowstone I learned from Yogi Bear," then people would gasp at me, audibly.
It's like being ten and telling people you've never been to Disneyland.
"Seriously?"
"Seriously."
"Don't your parents love you?"
"I think so, yes. What does Disneyland have to do with love?"
"Everything."
"Wow."
Ten-year-olds are pretty dumb. And I've since been to Disneyland (and it was fun). I went the summer my family moved to Utah; I was fifteen and, if I recall, paid my own way into the park. My parents paid to get me and my brother to California but I'm pretty sure we had to pay for admission for everything. At least, that's how I remember it.
Anyway, ten years later and I finally made it to Yellowstone! After being cut off at the pass, literally, we took a different route to Yellowstone, which was really quite snowy. We were seriously driving through a tunnel of snow—there were walls of snow on either side of us that were taller than our car. And it's June for crying out loud!
Once we got into Yellowstone we drove to Old Faithful right off (well, it took us hours upon hours to get there and Miriam soiled the first diaper she'd soiled in days and I very nearly wet my pants as well) and then sat and watched her fizzle for about half an hour. 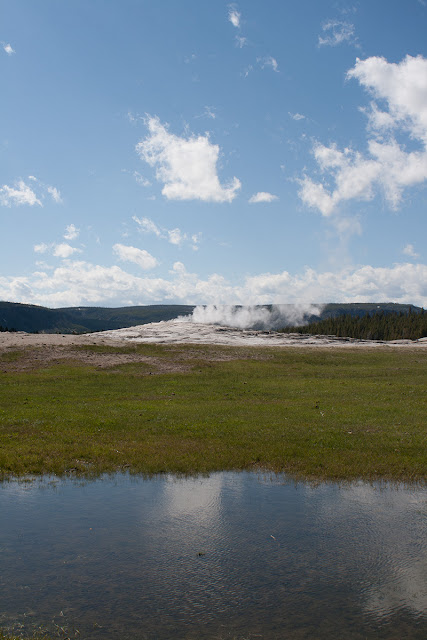 Rachel was like, "This is what we came for?" 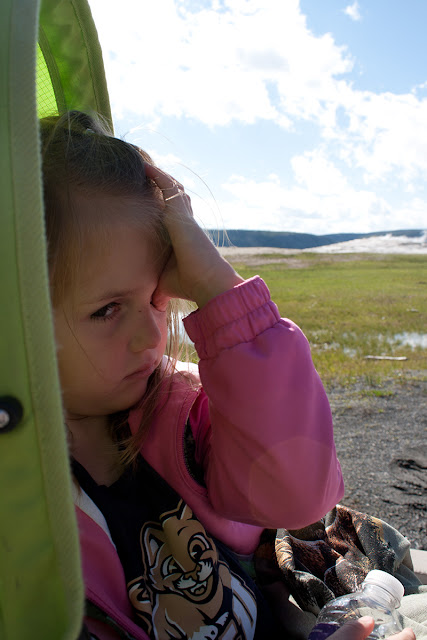 She kept complaining about it being cold, which it wasn't, but Grandma went and bought a tee shirt to wrap around Rachel's legs just to keep her from complaining. She was whining something harsh.
Miriam, on the other hand, was thrilled to be at "Gooey Geyser." We had watched an episode of Dora in the van, specifically the episode where Dora and Boots embark on a thrilling adventure across Bubble Bridge and over Muddy Mountain, to get to Gooey Geyer in order to rescue Boots' lost squeaky toy.
*squeaky, squeaky* 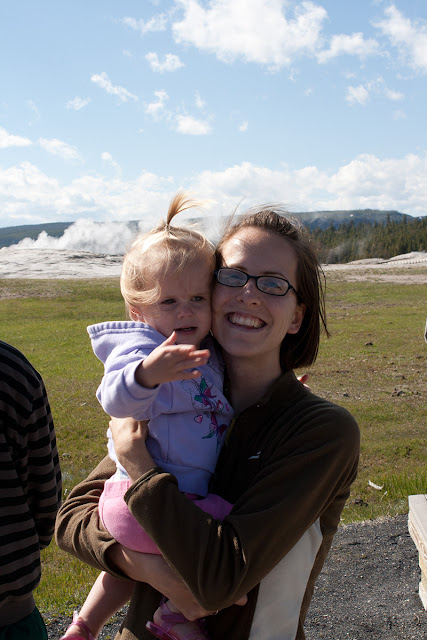 She kept looking for Dora but was too distracted by all the trees, squirrels, people, rocks, clouds, etc., to care enough that she never found her.
And then, Old Faithful erupted. It's like she times it. 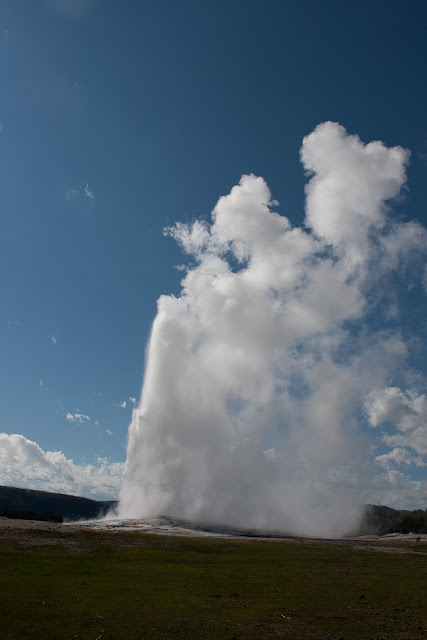 It was actually pretty spectacular to watch. We took a lot of pictures. We're probably the first people who've ever captured Old Faithful erupting, so we felt pretty special. 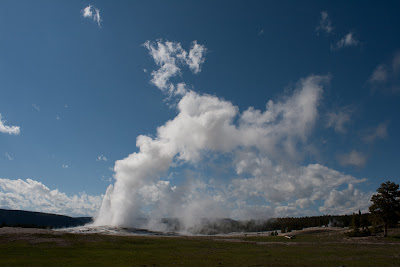 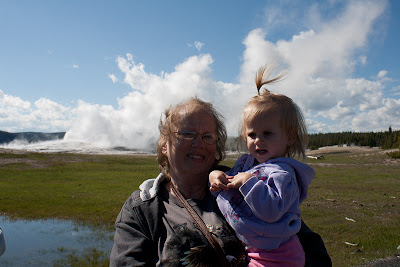 We walked back to the car and had a huge fight with Rachel. Well, Grandma, Andrew, and I were fighting with Rachel. Morgan, Emily, and Miriam stayed out of it. I finally told Rachel that she just had to change her attitude. And she told me she would if she wasn't so cold. So I told her we'd get pants out for her and she could wear them, but that if she kept her bad attitude I'd feed her to a bear. 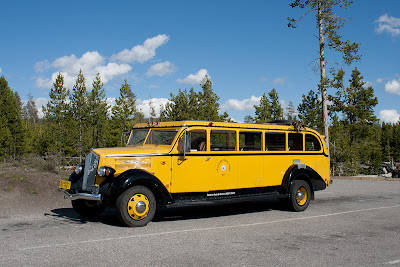 She wisely decided to change her attitude and, magically, everyone started to have a good time again.

We visited Fountain Paint Pots next. I think this was my favourite part. I know it was Rachel's favourite part because she told me a thousand times (but that might have just been because she'd finally stopped sulking for long enough to realize we were some place cool). She liked the "boiling mud" the best because it kind of looked pink. 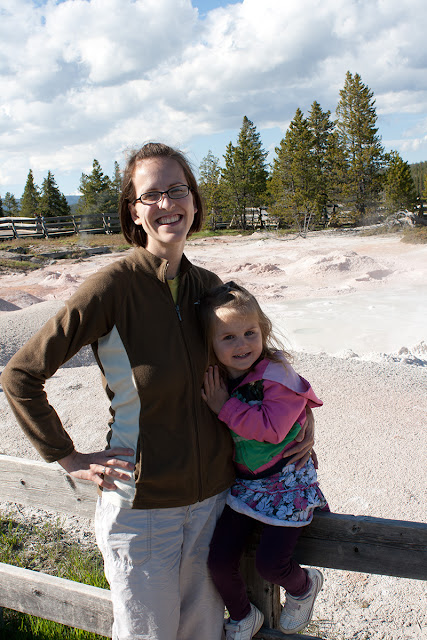 There's a boardwalk for tourists to walk on so that we don't accidentally fall into some freakishly hot water and die. The boardwalk at Fountain Paint Pots goes past the Celestine Pools, and there was a geyser, I guess, that was emitting a cloud of steam. We got to walk right through it. 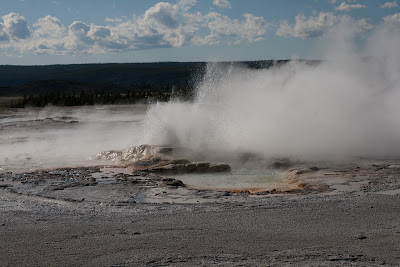 It was warm and misty and...stinky. 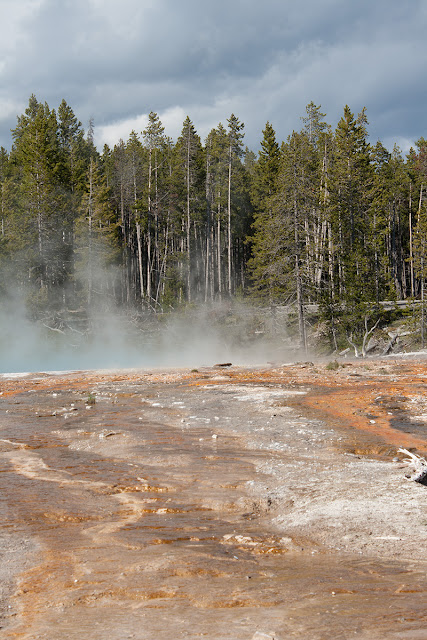 Yellowstone National Park is sitting on a gigantic volcano, basically, so the whole place smells strongly of sulfur, especially when you're walking through steam being let out of the volcano, so to speak. Something you might not know about sulfur is that it doesn't always smell unpleasant. It gets a bad rap because sulfur is largely responsible for smells like boiled eggs, skunk spray, garlic, and...flatulence. But,  sulfur is also a main component in the smell of grapefruit. 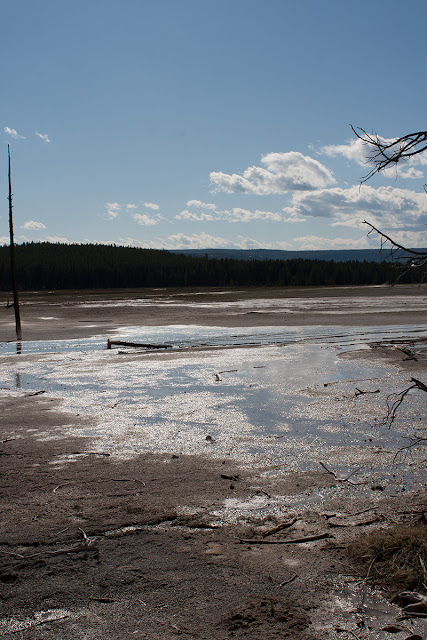 So unless you think grapefruit smells bad, it's a good example of sulfur smelling good.

Silex Spring was beautiful. The blue water looked very inviting, except for the fact that it's scalding hot. 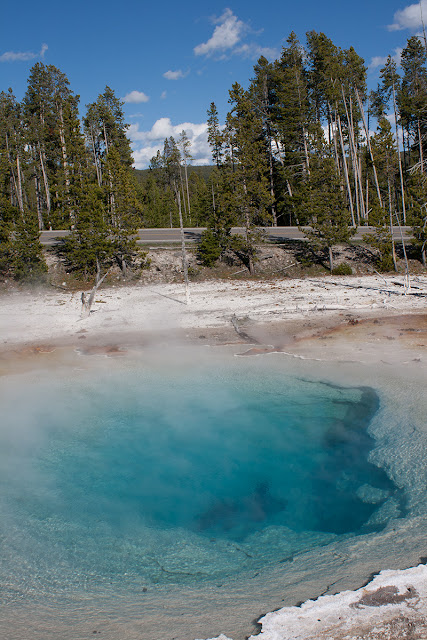 The Fountain Paint Pots, themselves, as I already said, were a favourite. It was so bizarre to see mud boiling and made me think of dinosaurs for some reason. 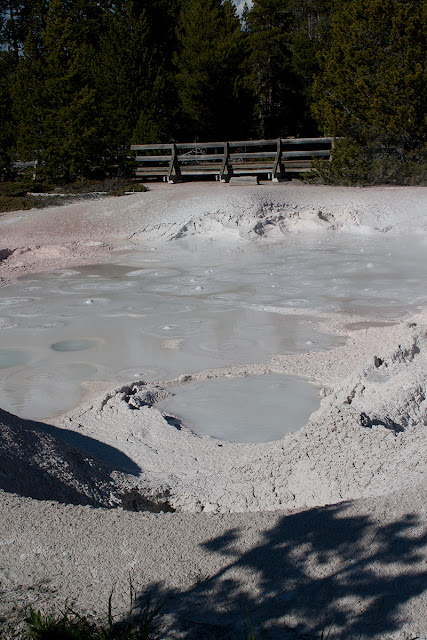 We didn't see any dinosaurs, though we did see some buffalo on our way out of the park. We had no choice but to stop and admire the herd because everyone in front of us had stopped as well. Some of them were close enough to touch (but we didn't). 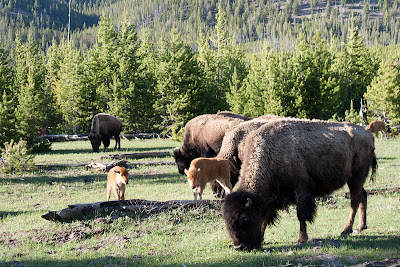 Our last stretch of the day was to Emily and Morgan's house, with is just a few hours away from Yellowstone. We didn't feel like driving all the way home, so we stayed the night at the Best Western (Cottontree, maybe?) and it was fabulous. I don't think I've ever slept in a more comfortable bed. Ever.
I almost didn't want to go home because that feeling of "I just want to sleep in my own bed" entirely disappeared over night. Now I just wanted to sleep in that bed. Alas, we packed up, made a stop at Reed's Dairy, and went home.
Posted by Nancy at 3:12 PM