Fourteen hours in a car is a long time. For some reason I thought for sure it was only twelve hours—that’s how long it’s been since I’ve been up to Canada—but twelve hours only takes you to my aunt’s house near Taber. My sister lives in north Calgary so we had two more hours to go when I thought we should be done.

It’s funny to be on this side of childhood. I remember doing exactly the same things my children do…well, at least some of the things they do. When we were saying goodbye this afternoon (yup, I’m writing about our trip TO Canada on our way HOME) my niece, Piper, was going around hugging everyone and when she got to her mom she hugged her, too, and said, “Goodbye, Mom, see you later!”

Nothing in this life is creative, though. Thoughts are somehow passed down through generations and hop from person to person. We elaborate on them, but there’s no thought that is 100% unique. There have been too many thoughts thought of by too many people over too wide a time period to allow for much creativity. We may elaborate on ideas that pop into our mind from somewhere else, but it’s rather difficult to pin down where the thought came from.

As Abra is fond of quoting, “Who knows where thoughts come from? They just appear.”

This is our story.

Nothing terribly exciting actually happened during the trip so this probably won't be a very exciting story, truth be told. We watched movies back to back for a long while. Once, when we were sick of watching movies Andrew told Rachel that she had to wait until mile marker 135 (in Idaho). She sat so patiently until she finally piped up from the backseat, “Can we watch a movie noooooooow?”

“Let me check how far we’ve gone,” said Andrew as he checked out his window for the next mile marker, “Let’s see…we’re at mile…marker…153. Yes. We can watch a movie now.”

“But you said mile marker 135!” she complained.

The worst, though, was when that movie was over and Andrew said that we wouldn’t be watching any more movies until we got over the border. I read stories to the girls until my voice was hoarse; then I looked out the window to for the next mile marker.

Somehow we made it to Sweetgrass without the crutch of the DVD player. Sweetgrass has the most wonderful rest area; I’m not even kidding. They have multiple restrooms that have doors and sinks and toilets and chairs you can strap your kids to and changing tables—so you get a little privacy instead of having to use a big restroom with stalls.

I took Miriam in one to change her diaper. The first thing she did was check to see if the bathroom echoed (because it’s common knowledge that most bathrooms, at least large public bathrooms, echo).

“Ahhh! Ahhh!” she yelled and then paused to wait for her echo. It never came (because we were in a private room instead of a stall). “Potty—broken,” she declared.

Then she talked all about her potty business. She’s gotten quite vocal about her…needs. When she needed to go potty she was not afraid to tell us so and would start yelling, “Potty! Potty! Potty! POOP! POOP!”

Sometimes we’d make it, but sometimes we wouldn’t. I could always tell when we hadn’t made it to a gas station in time because she would stop yelling about bodily functions and would instead look at me seriously and say, “Yucky. Yucky. Yucky. Wet. Wet. Yucky.”

I think once we’re finished car-tripping everywhere we’ll take her out of diapers altogether since she’s finally communicating consistently about such things.

We also made a stop in Idaho Falls on the way up. Auntie Josie was still in the washroom but everyone else had piled into the van. Uncle David started the engine and threw it into gear and was moments away from zipping away from the gas station before we told him that he had better wait for Josie.

In the end we made it to Abra's apartment in one piece, even though we got a little lost trying to find it since no one remembered to ask for directions before we left. When we were about an hour away from her house, my mom remarked that, if we were lucky, it would still be light when we got to Abra's house.

Andrew scoffed at this. It was already 9:30 at night. There was no way it was still going to be light when we arrived.

We pulled up in the alley behind her house around 10:00 PM. It was...still light outside; the sun had barely set.

I had told Andrew about staying outside playing until all hours of the night during the summers of my childhood. For some reason, though, he couldn't really picture it. He knew about white nights but simply didn't imagine that extended to where I had lived—he thought that only happened, like, way up north.

Really it's just to make up for the winter when the sun stays hidden away for so long; when the sun is out you soak up all the sunshine you can get. And so that's why we all ended up staying up visiting until midnight...including the girls.

Miriam took to Auntie Abra, who she stubbornly insists on calling Abbi, right away. 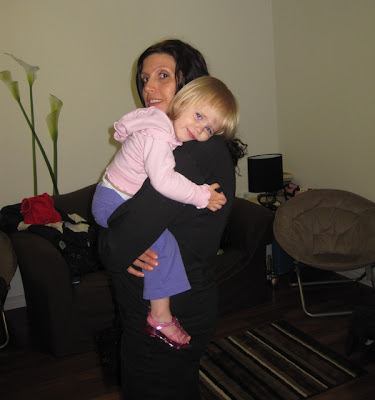 That made Abra very happy. 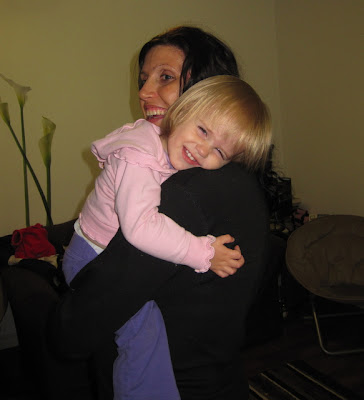 We played a few rounds of Twister and had a great time just enjoying each other. This was only the second time Rachel's been to Canada and it's was Miriam's first time, ever. Needless to say, it's been a while since I've seen Abra and her kids. 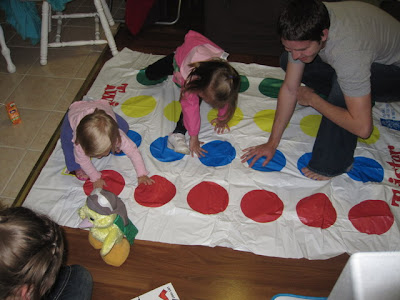 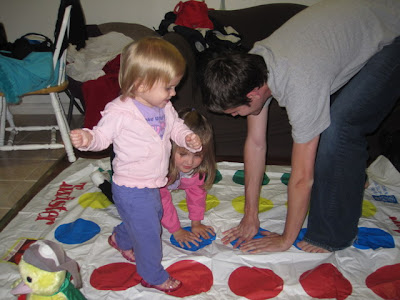