The acronym PCG5 seems a bit misleading since the P is technically silent and all three letters come from the same word: pneumocardiogram. I, uh, don't actually know what the 5 is for.


Anyway, it's a twelve hour test that measures all the vitals they normall measure (respiratory rate, heart rate, oxygen saturation levels) in addition to a couple of others (effort, air flow, things like that). It also involves a pH recording to see how acidic his spit up is (in order to determine whether or not he has reflux). He got all hooked up after we did our back-to-back feeding yesterday (so around 2:30 PM).


We didn't see him until 10:00 last night and boy was his little room crowded!


This is the normal set-up: 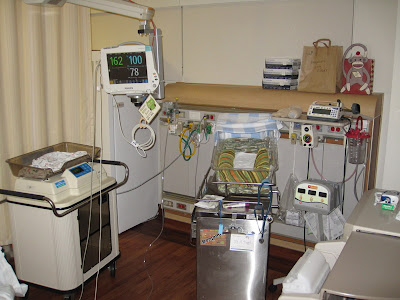 In this first picture you can see: a scale on the left, his monitor, his bed, and a roving breast pump. 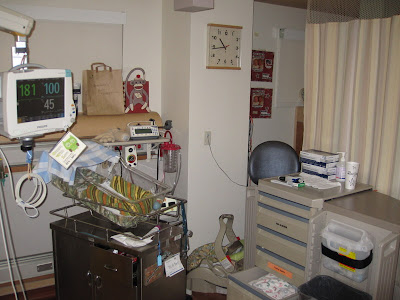 In this picture you can see his little storage/desk area and his car seat (which we so hopefully brought in when they did his first 12-hour request).

Last night he had all that stuff but the scale was squished between his bed and the storage/desk thing and a cart with a laptop and a bunch of monitors was on the left side of his bed. 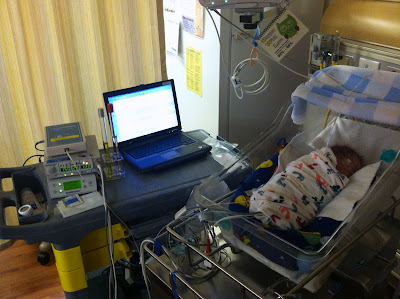 Benjamin was hooked up to all sorts of things. He had his nasal cannula in for his oxygen and a second nasal cannula in for the test. In addition to his NG tube he had a probe down his throat to collect the pH samples for the acid reflux test. Besides his oxygen probe he had another probe on his leg. He also had his heart rate and respiratory rate monitor cords. He was not exactly a happy camper. 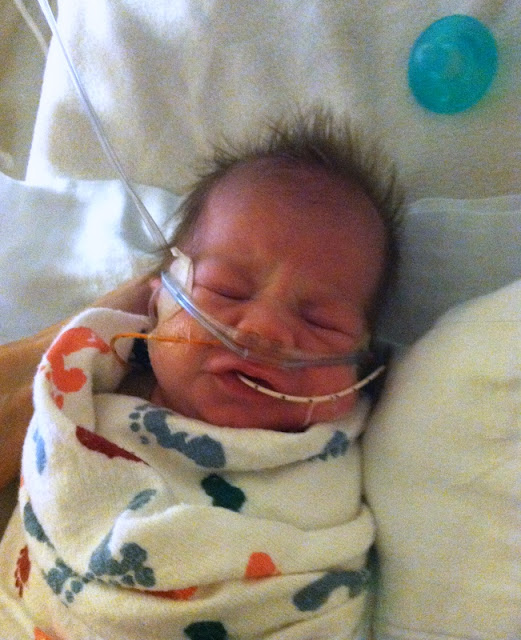 Andrew was suddenly terrified of Benjamin. The tube down his throat was making Andrew's feet hurt (that's Andrew's response to medical...ailments) and the cords everywhere were freaking Andrew out. I left to go to the bathroom and said, "You can start doing his cares. I'll be back in a minute." But when I came back Andrew was standing in the exact same spot, still staring at Benjamin with wide eyes.

His big monitor was turned off and all his readings were instead feeding into the laptop. It was relaxing for me because I've been so obsessive about monitoring the monitor. But I couldn't see the computer from where I was sitting and he rarely beeped (except for when we disconnected him to do a test weight, which was a joke since we couldn't unhook half the cords he was connected to). The alarms on these monitors were so high-pitched they made me cringe. But they didn't make my heart race like the regular alarms do.

Benjamin was a champion breastfeeder, once again. He nursed despite the extra cannula and the tube down his throat. He nursed until he was satisfied and then he fell asleep, looking much more comfortable than when we first arrived. 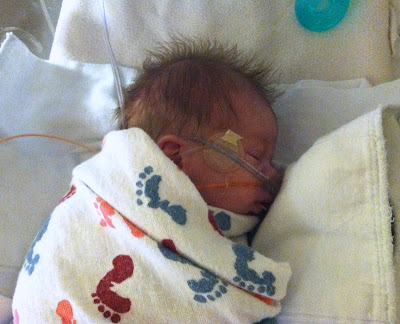 The occupational therapist came in to talk with us before we'd finished nursing and was amazed to see that Benjamin was in fact nursing—gulping down milk like he normally does. "I think Benjamin has proven himself," she said. "If he's nursing with all that junk on his face, he deserves to go home!"

We just got the call from the hospital with the results of the test. Benjamin has both reflux and central apnea. Double fail. But if you're going to fail a test you may as well fail it with gusto, right?

Reflux causes bradycardia because there's a nerve that the acid irritates that sends a message to the heart to freak out (thus the name heart burn, I guess) and the central apnea simply means that his central nervous system isn't quite as mature as we thought it was and he still forgets to do things like pump his heart and breathe his air. They'll be putting him on caffeine to make his brain perky enough to pump his heart and prevacid to quell his reflux.

We'll likely be doing another 12-hour request tomorrow. If Benjamin passes that and we begin our homeward journey (it will still be several days) then he'll be sent home with oxygen and an apnea monitor. When we first started our NICU journey I was so terrified of all the machines and whistles and bells that I was hoping we'd be taking home a perfectly healthy baby and nothing else. Now that we've been at the NICU for a month and I know where all the probes go and how to put them on and what the oxygen levels mean and how to revive a baby who refuses to beat his heart and breathe his air, taking home a bunch of hospital equipment doesn't sound too scary.

Sometimes hospital equipment can be downright hilarious. Take the name of the machine used to see whether Benjamin had reflux or not: 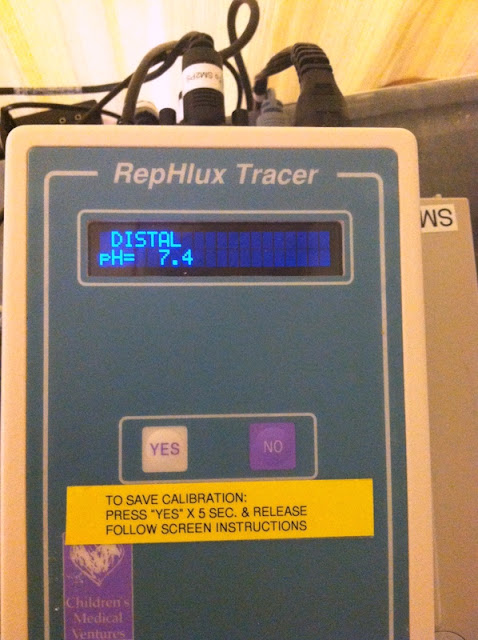 RepHlux Tracer. Isn't that great? Because pH is how we measure acidity but 'ph' says 'f.'

You have no idea how happy the name of that machine made me.

We've also enjoyed learning the terms bradycardia and tachycardia. Bradycardia, as anyone who has been following our NICU story knows, is when the heart slows down. It comes from the Greek bradys, which means 'slow,' and kardia, which means 'of the heart.' Whenever Benjamin's heart drops below 80 beats per minute he's likely to trip his "extreme brady" alarm. Tachycardia is the opposite—it comes from the Greek tachys, which means 'rapid,' and kardia, which means 'of the heart'—and if Benjamin's heart rate jumps above 200 beats per minutes (as is likely the case if he's getting a diaper change) then he'll set off his "extreme tachy" alarm.

Andrew's favourite word with the root tachys is tachygraphy, as in 'rapid writing,' also known as 'shorthand.' But try saying it; that's the fun part. And then mispronounce, again just for fun: tacky-graphy.

So now you know what we do with our spare time at Benjamin's bedside. It only maybe reveals that we are hopelessly nerdy, but whatever.

Since being in the NICU our pillow-talk time has decreased by approximately 90%. I'm not sure if this is because we're so bone-tired that we fall to sleep the minute we climb into what we used to think was our broken-springed, squeaky, uncomfortable bed, but which we suddenly find the most comfortable thing on earth, or if we've simply gotten more time to talk in the car than ever before in our whole married life. Perhaps a mix of both. Either way, we do most of our talking in the car now instead of before going to bed.

We like to play the license plate game, where we look at the letters on the license plate and use them, in order, to form a word. So, for example, if you saw the license plate B48 TL7 you could come up with the word 'beautiful' but not 'Baltic' because the T and L are in the wrong order in Baltic. Anyway, the person who comes up with the longest word wins. We're still debating if tacking on prefixes and suffixes count as unique words or not.

Today we saw a license plate with the letters HYC.

Some letter combinations are trickier than others. JVX or ZGJ, for example, are basically impossible.

"Halcyon," I said, correctly, but then said, "But I don't know if I've ever said that word so I might be saying it wrong."

"I've always said it 'haly-con' in my head," Andrew said.

"I'm glad I'm not the only stupid person in the car," I said.

Apparently it's one of those words we've often read but never said.

I pulled out my phone to look it up online. And—darn it all—it didn't even count for winning the game since I had reversed the Y and the C! We got stuck in a very interesting chain of research. First I looked up 'halcyon days' since that's the phrase we always hear. It's two weeks of calm weather around winter solstice. Then I read Andrew the myth of Alcyone and Ceyx, who used to call themselves Zeus and Hera in jest so Zeus killed Ceyx at sea and then Alcyone threw herself into the sea for grief. Later the gods had pity on Alcyone and Ceyx, who were such an idyllic couple, that they turned them into birds—Halcyon kingfishers, to be precise (beautiful birds). The Greeks believed that the Halcyon kingfishers made their nests on the sea during the two weeks of calm weather around winter solstice.

Most of it is just legend, but it made for an interesting conversation. And now we both know how to say halcyon and have used it in multiple sentences.

Later remind me to tell you the story of our little miscommunication on Draw Something (another tool to pass time at Benjamin's bedside) because that was pretty hilarious and it makes me look dumb instead of Andrew and he appreciates it when I make myself look silly on the blog.
Posted by Nancy at 11:24 PM