I have so many blog posts to write that it's not even funny. This post comes first, though, because it contains time-sensitive material. All the other posts I have to write are things that were scheduled on our calendar, events that we (more or less) remembered to go. This, however, wasn't on the calendar. It wasn't even on the radar.

Benjamin was happily awake this evening so I put him on the floor, on his back. He kicked around there, happily looking around the room, and I thought to myself "This is highly unusual." And then I thought "Tummy time!" because I haven't been very good about tummy time with this boy. Life's been busy so we usually do tummy time together in the recliner at around 3 AM when Benjamin's like, "This is the best time of the day ever!" and I'm like, "Oh, my gosh! Go to sleep!"

Today, though, he was in such a good mood and the girls were (for unknown reasons) not playing leapfrog over him so I flipped him onto his tummy. He angrily rubbed his face into his blankets for a few seconds before he remembered that he could lift his face off the floor. So he did. 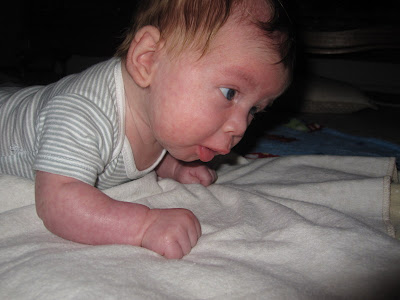 And he kept it off the floor (which is normal). And then he did this: 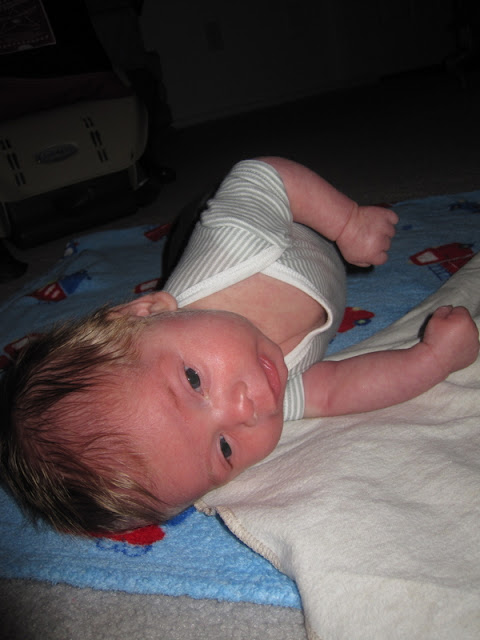 And then he flipped all the way over onto his back.

We know it's not a fluke because he did it a couple of days ago and we thought it was a fluke then. This time, though, we watched him roll and he definitely was working the mechanics of it out in his brain. I plopped him back on his stomach again after calling Grandma into the room and he was one angry boy. He screamed and screamed until I picked him up and then he gave me a look that said, "What in the world did you do that for?! After I did all that work..."

So here's a riddle: How old was Benjamin when he learned to roll over?

Was he eight weeks? Or was he 12 days old? Or somewhere in between?

Either way he's far too young to be doing stuff like this!

When Rachel was a baby she liked to be held facing out and we were told that with child #3 we wouldn't do that because we'd want that child to stay small longer.

I don't deny that I wish my children would be content to be little but I still hold that their precociousness has more to do with their personality than any prodding on my part. Like I said, Benjamin hasn't had religious tummy time—I was very strict with Rachel, being sure to get in the exact number of minutes the doctor suggested—and he doesn't actually like to be held facing out (rather, he prefers to be held up to a shoulder or lying down in your arms). And if anyone has been coddled it's Benjamin (because if there's anything that will turn you into a helicopter-parent it's a stay in the NICU). He's been swaddled and left on his back to nap in his bassinet way more than either of the girls. Somehow, though, this little precocious personality is surfacing. A personality very much like Rachel (and not very much like Miriam, who didn't roll until the ripe old age of four months).

Rachel though didn't roll over consistently until she was almost 3 months old. Benjamin has her beat and he's a preemie so he's technically two weeks old, not eight. Yikes. Yikes. Yikes.

Anyway, after Benjamin had exhausted himself with tummy time we had story time.

Story time can be a tad squishy... 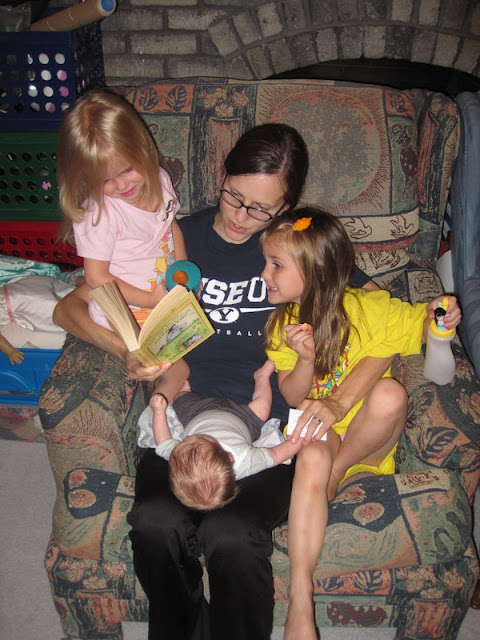 Benjamin enjoyed the picture on the cover while the girls enjoyed the (occasional) pictures inside.

It was a busy evening. I'm still a little worried about what this rolling-over business will mean for the future since Rachel rolled early, sat up early, crawled early, walked early, ran early, etc. It seems that once she started being mobile she just couldn't stop! But at least Benjamin sleeps more and cries less than Rachel did as a baby (though he sleeps less and cries more than Miriam did). Besides, if Benjamin ends up being as energetic as Rachel they'll at least be good company for each other!
Posted by Nancy at 12:19 AM