I bet you all thought I was through with writing about Rachel's birthday. Well, I'm not.

It's true; Rachel does have a passel of adoring (and adorable) friends. And while I didn't want to throw a huge party I would have felt bad telling Rachel to limit her guest list to a few of her closest friends. Why? Because we're moving in two weeks and she'll never see her little friends ever again (or at least not for a long while). That's why. So in addition to this being Rachel's birthday party it was kind of like a final play-date with all of her little friends as well. She invited her whole primary class, including one of the new girls in the ward, and some other kids from primary and around the neighbourhood. Almost everyone was able to come and it thrilled Rachel to pieces!

We started out the party with colouring pictures of Hermione and Harry while we waited for everyone to arrive. Then we took a little walk around the house and entered the yard through the gate, which was decorated as platform nine and three-quarters, before hopping on the Hogwarts Express.

Our Hogwarts Express was a game of musical chairs—once you were "out" you had made it to Hogwarts and got to be sorted under the Hogwarts sign. Everyone was sorted into Gryffindor and we took a picture of each child with the sorting hat on. Our hat was a little more fancy than the "real" sorting hat. I thought about making a sorting hat but this one was available and the kids didn't know the difference... 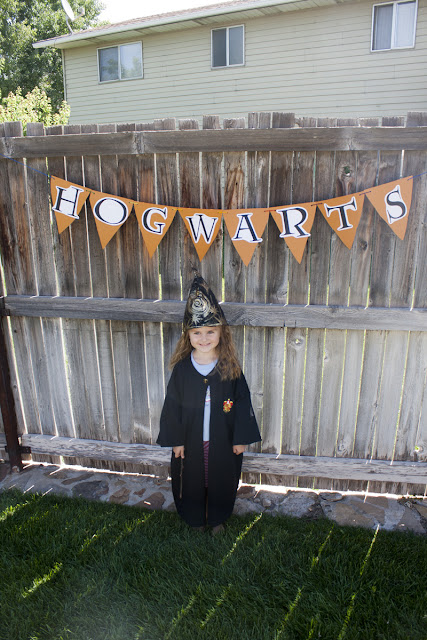 Miriam was the first one out of the game. She and Emily came to a head at the last remaining chair and both broke down in tears. Neither one of them wanted to sit down on the chair because that would mean that they would make their friend be out. Instead I grabbed Miriam, declared that Emily was still in the game, cued the music up again and held Miriam while she cried hysterically. It was a fun game.

After we'd all made it to Hogwarts we had potions class. Each child got a cauldron (a pie tin) and a vat of gillyweed water (vinegar). I then handed out black spoons to the children that each had a drop of food colouring dried on and gave them a scoop of exploding rock powder (baking soda). The kids were all very serious about the exploding rock powder and listened to my directions very closely. I'm not sure if they actually believed it was exploding rock powder because Miriam asked me later if she could have some "exploding baking powder" (since she knows what our baking soda container looks like) but they were all at least swept away in the pretend world we'd dreamt up for a minute and the exploding rock powder was treated like a dangerous substance. 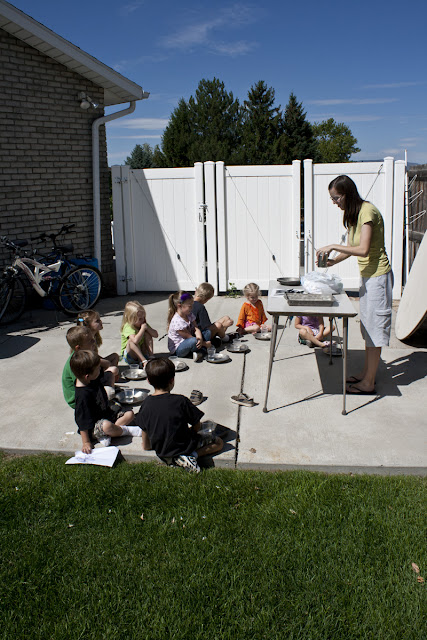 We counted to three before we dropped the exploding rock powder into the vinegar and the kids all excitedly announced what colour their magic potions had turned. 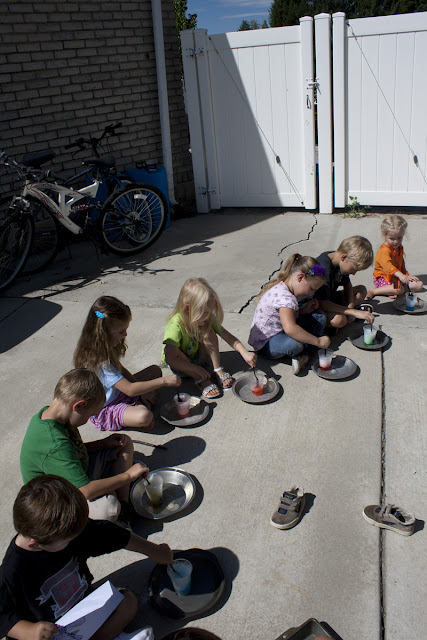 Then we heard the sounds of troll and hunted around the yard for him. We beat him up with our clubs and earned many, many points for Gryffindor. 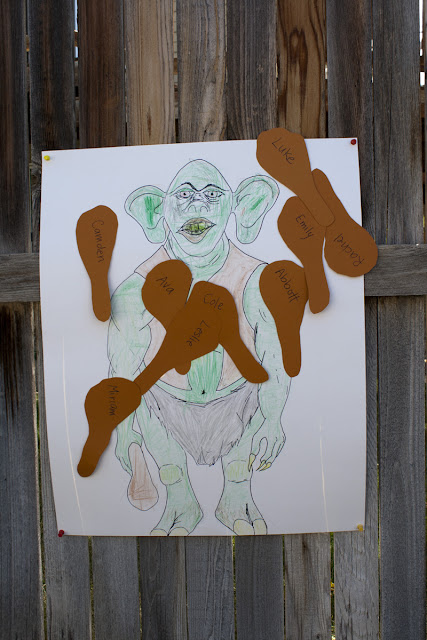 We went for a hunt for the Sorcerer's Stone—we took turns hiding stones for each other and played Harry/Voldemort (Hot/Cold) to help the hunter find their stone. Then we had transfiguration class where we turned suckers into ghosts by wrapping them with kleenex and securing it around the sucker with a twist tie. Again the children were such sports about maintaining our magical world. When Rachel's little friend Cole wanted to eat his sucker he came up to me and said, "Help! I can't undo my magic!" He's three still. And is adorable.

Next we had Quidditch practice. I gave each of the kids a little container of bubbles and they went to town. They liked this activity a lot more than I thought they would. 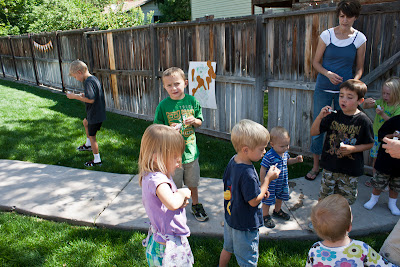 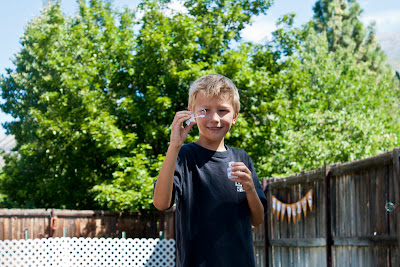 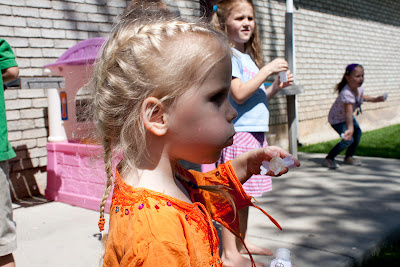 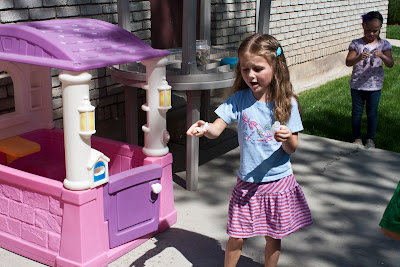 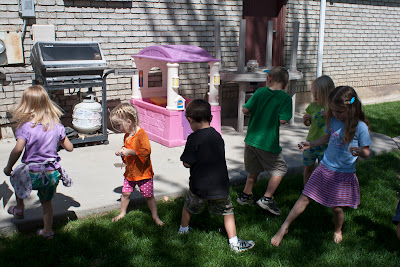 Rachel had fun opening her presents. Her friend Leslie, who also loves Harry Potter, made a little potions bottle (with the help of her mom). They labeled it Living Death and filled it full of bubble bath and made some antiquated paper and wrote instructions on it for Rachel. She loved that gift. 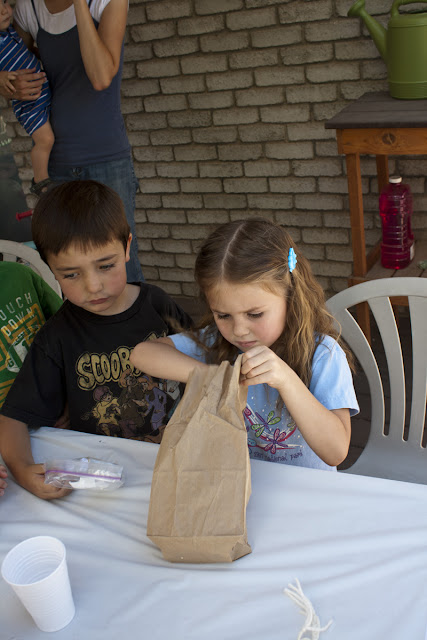 She also got a butterfly habitat, a necklace, and a book.

I love this picture of her little boy friends looking over her shoulder as she opens up the book she got (it's from the two on the right; she claims she is going to marry the boy on the left): 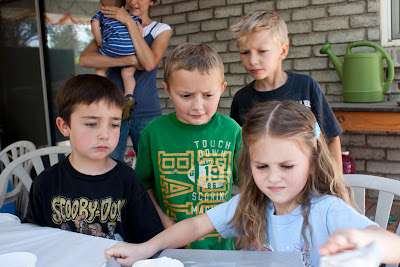 I love that picture almost as much as I love this picture of Rachel examining her gift: 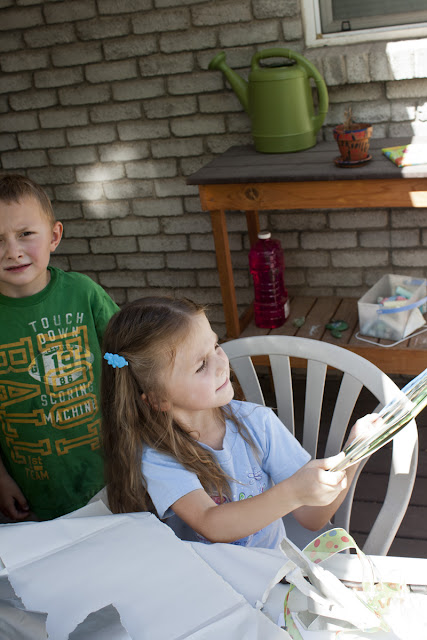 We brought the children in to admire the cake and admire it they did. They were all claiming lego pieces and windows and things. We sorely disappointed them when we told them we weren't going to completely disassemble the cake for them but instead discretely cut pieces from the back side. 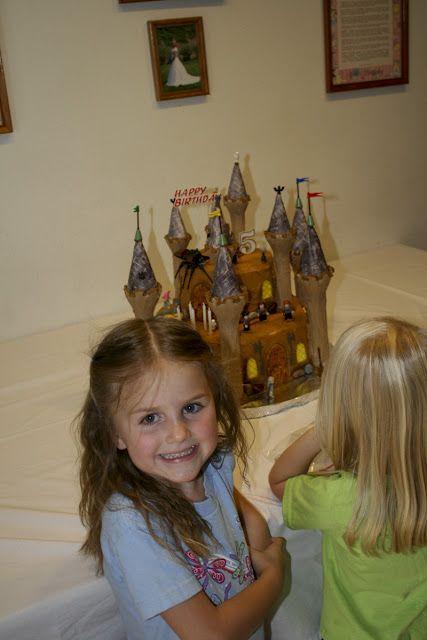 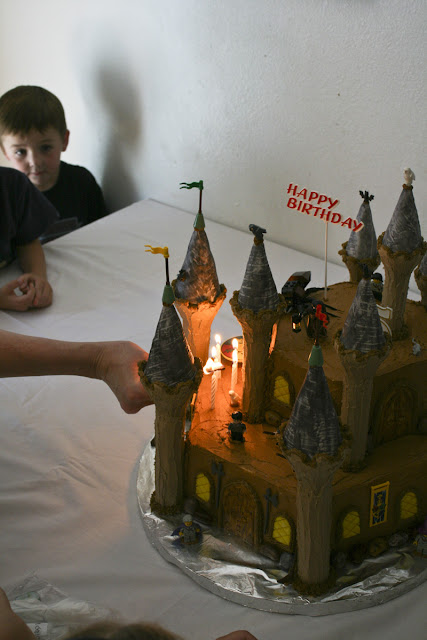 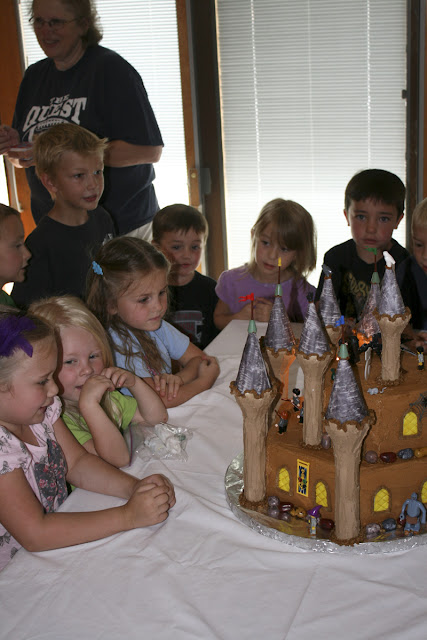 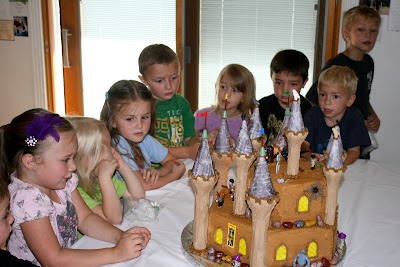 Then we all went outside to enjoy our cake and run around like wild until the parents came to pick up their kids. 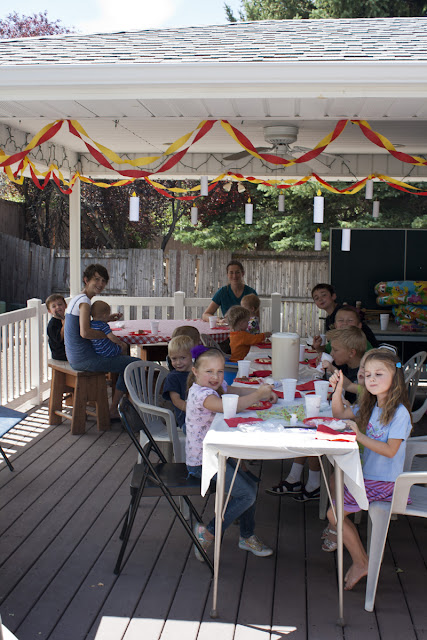 It was as enjoyable as it was exhausting, that's for sure.