Rachel was sweet when she first woke up on Tuesday but soon turned into a beast of a child. 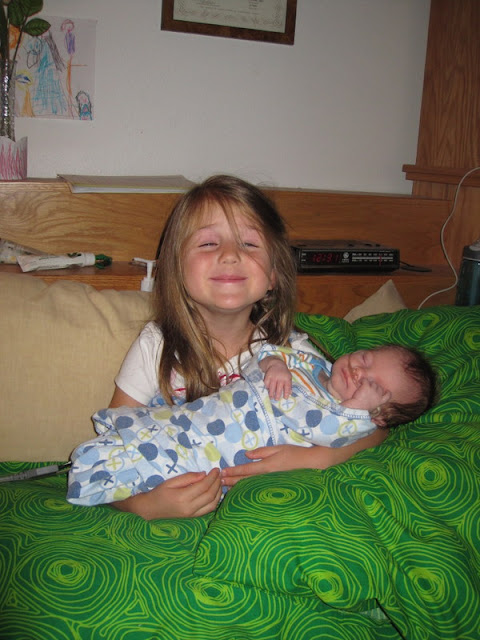 When she started having "the squirts" I told her that she was sick and that she wasn't allowed into the bedroom with Benjamin anymore. She went ballistic. I told her it was time for her to take a nap—because she was clearly sick (she had soiled two pairs of underwear that morning). She insisted that she wasn't sick.

We had an epic yelling match. Grandpa (Reid) keeps teasing me about it because he was drawn into the fray when he heard me scream, "This is ridiculous! You are sick! Take this throw-up bucket and go to bed!"

"I'm not sick!" Rachel screamed back. "I haven't even been throwing up all day!"

She ended up taking the throw-up bucket and storming into her bedroom only to reappear moments later with a bucket full of vomit.

"I think I'm sick," she whimpered.

Benjamin and I spent most of the day alone while Andrew and Grandma tended to the sick girls. He does some pretty silly things with his cannula—when he's hungry he'll yank at it and it will often end up in his mouth. I think it makes him look like a vampire. 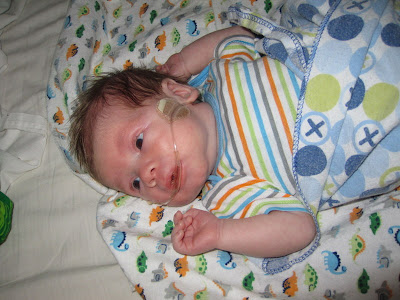 As far as sick children go, I'd take Rachel over Miriam any day. Miriam might be a little easier to convince it's nap time—and in fact volunteers to go lie down—but she can't get to a toilet or bowl to save her soul. 100% of the time she threw up this past week she threw up on the floor or a person and she usually would go in her undies before running to the toilet for her issues on the other end. Rachel, however, has made it to the toilet (or bucket) 100% of the time and has only dirtied a couple of pairs of underwear.

Once I was napping with Benjamin and I heard her crying. I thought Andrew was watching her so I ignored her and tried to go back to sleep but she kept crying so eventually I went to find her. She was in the bathroom.

"Mommy! I pooped in my un'nerwear!" she wailed.

"That's alright, baby girl," I soothed. "Let's just take off your icky clothes. Lie down on the mat."

She lay down and then sniffed, "And I did do some on the floor, too. We need to clean it up."

I looked to where she was pointing and my jaw dropped open. There was watery diarrhea everywhere.

Miriam had moved the stool over to the light switch, setting it over the heater vent. I'm not sure why she chose a day when she was feeling so miserable to exercise her independence—perhaps it's because everyone else was sleeping—because she usually runs around the house begging people to turn the light on for her instead of moving the stool and turning it on herself. At any rate, she had decided to turn the light on by herself and it took a minute too long and she lost control all over the place. Diarrhea was waterfalling from the stool, dripping into the heater vent and pooling on the floor.

It was an epic mess stretching from the doorway to the sink to the toilet.

I'm sure no one just wanted to read that but don't go feeling too sorry for yourself because I'm the one who had to see it. Andrew shared the task of cleaning it up with me.

Later in the day my parents braved entering our den of sickness in order to see little Benjamin. My dad had been waiting to hold Benjamin for weeks. He's one proud Grandpa! 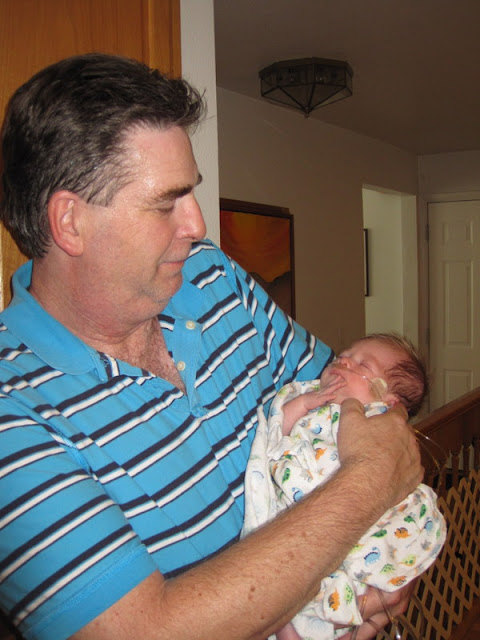