We had a rather busy day at church today. Andrew gave a talk in sacrament meeting which had Rachel rather nervous all morning. She was worried he was going to tell an embarrassing story about her since she'd overheard him mention temper tantrums while telling me about his talk. In the car she asked if I had written his talk for him and when I answered that I hadn't she asked if I had at least read over it to make sure it was okay. I hadn't. It was a surprise for all of us—but he didn't say anything too embarrassing and, much to Rachel's relief, only mentioned temper tantrums in the most general of terms.

He spoke about the Plan of Salvation, and more specifically that we're supposed to depend upon the Lord in this life but that we're active players. We have to do things and can't just sit around being good. He quoted what's somewhat become our family motto: Let us cheerfully do all things that lie in our power. We have the power to do things and therefore should cheerfully do them—even if it's a job we dislike (for example, unloading the dishwasher (that's where the temper tantrum example came in play)).

It was a good talk.

After sacrament meeting we wrangled all the kids off to the primary room and then Andrew took Benjamin while I fulfilled the bulk of my primary obligations. Then I took the baby while he taught priesthood.

We were both pretty tired when we got home. We had a quick lunch/snack and then I took a quick nap before we skyped with Grandma. We managed to squeeze in a walk before talking to my parents, which was lovely. Rachel brought along a little butterfly she'd made and she and Miriam scouted out different flowers and helped the butterfly drink the nectar. Rachel began composing a spring song, which she finished writing at bedtime. I'm not sure of the tune, but it goes like this:

We stopped by the park to play for a while. Some might consider that breaking the sabbath but I don't; not today. The girls have been fighting so much this week that I think being out and about and playing nicely together was a far better way for them to keep the sabbath than sitting at home trying to get along would have been. Besides, Rachel served her siblings by pushing them in the swings and helping Benjamin down the slide. Serving others is a great way to keep the sabbath!

(The next time you need to rationalize something, give me a call. I'm a pro!)

Here are my swing-loving children: 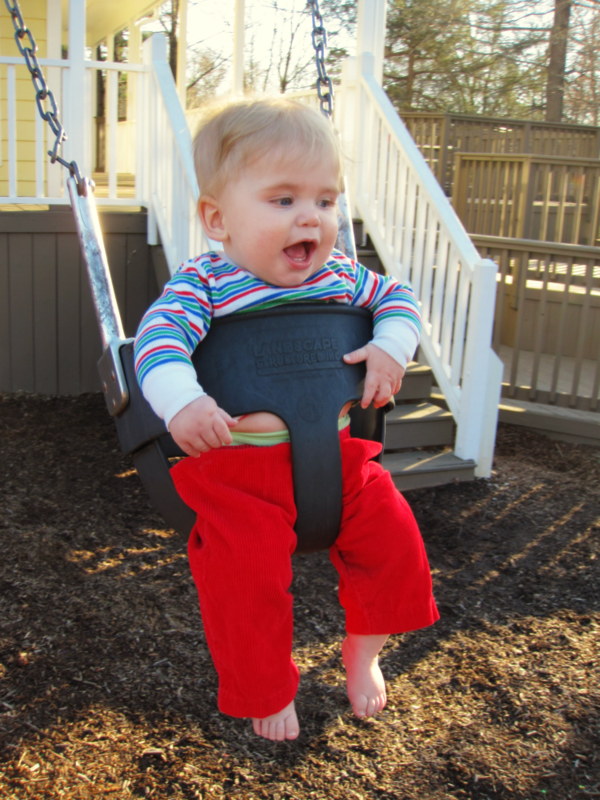 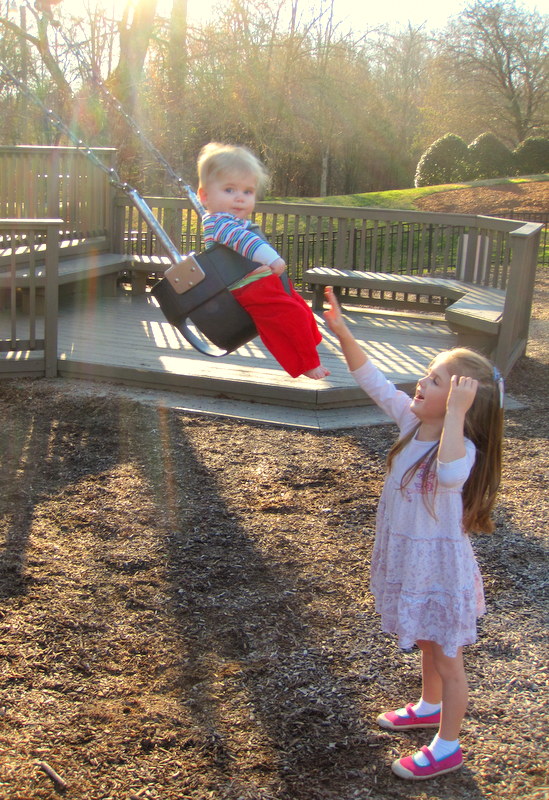 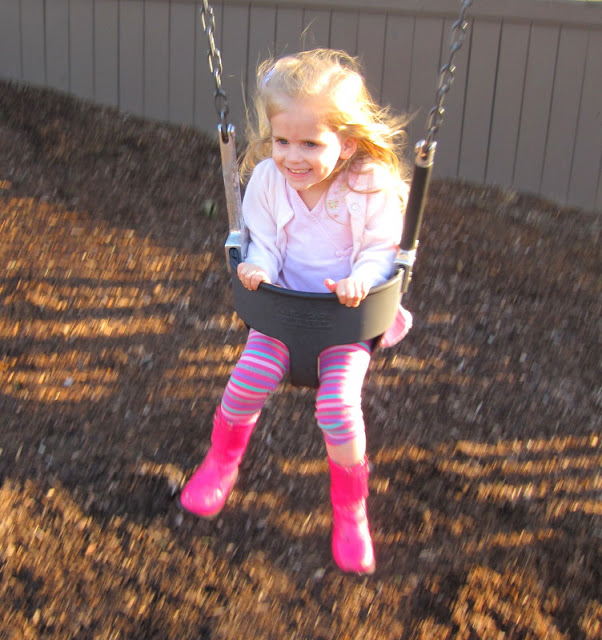 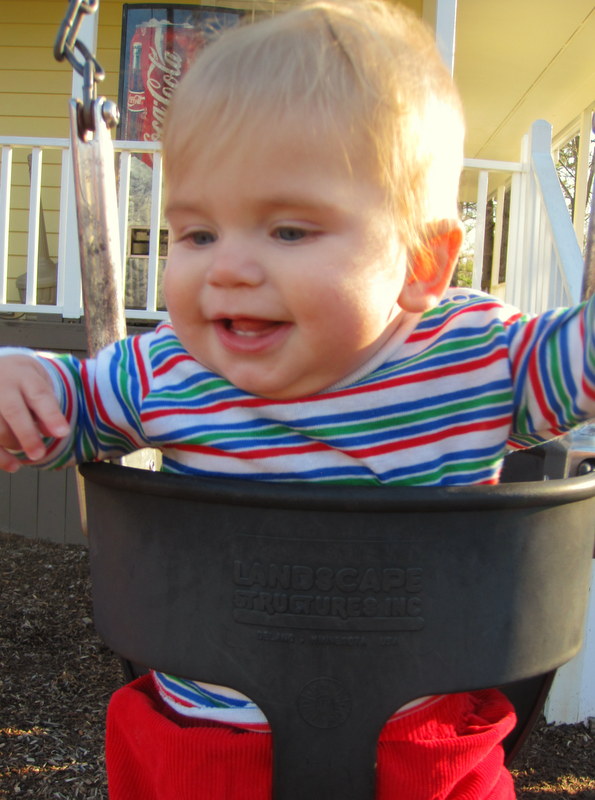 And here are my slide-loving children: 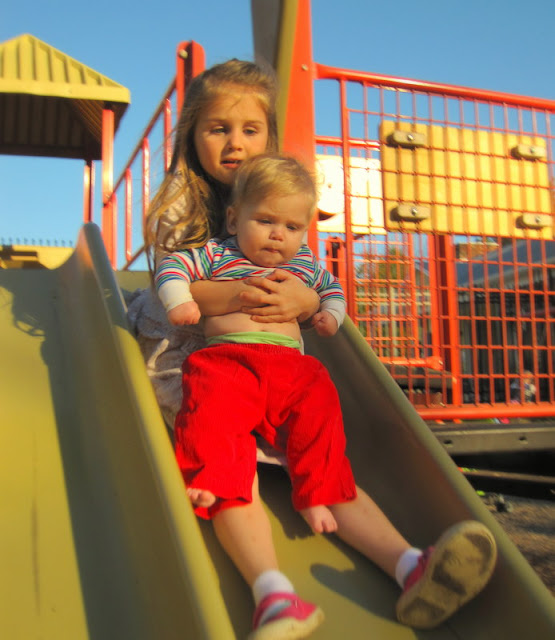 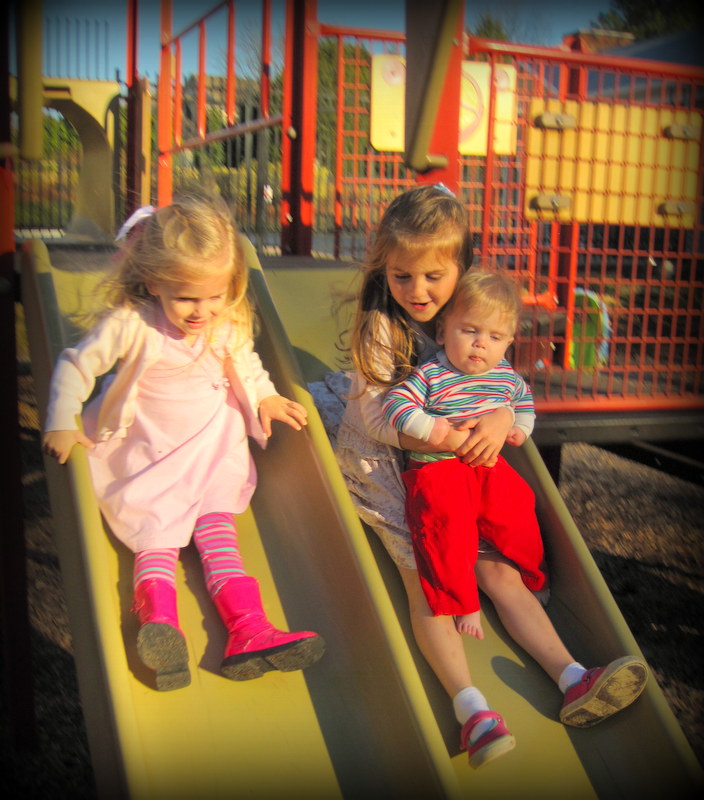 I love how Benjamin looks a teensy bit worried in all those pictures of Rachel lugging him around. 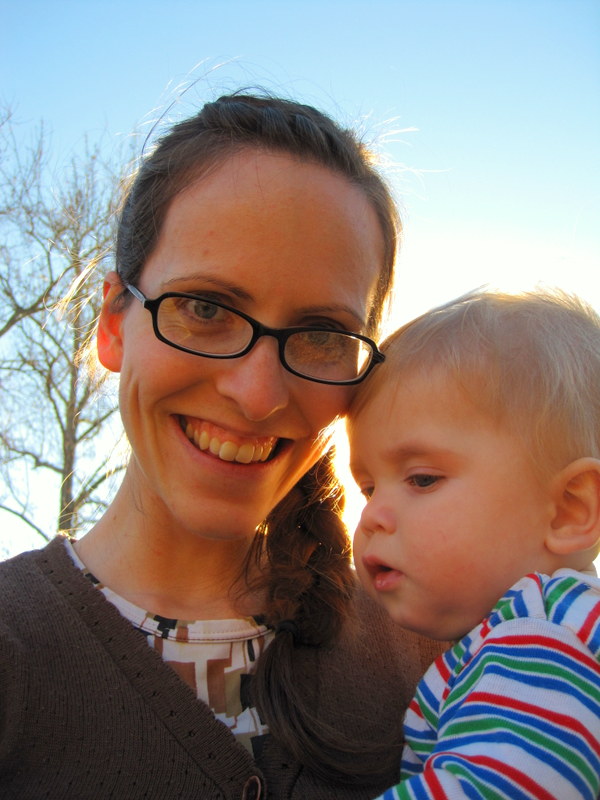 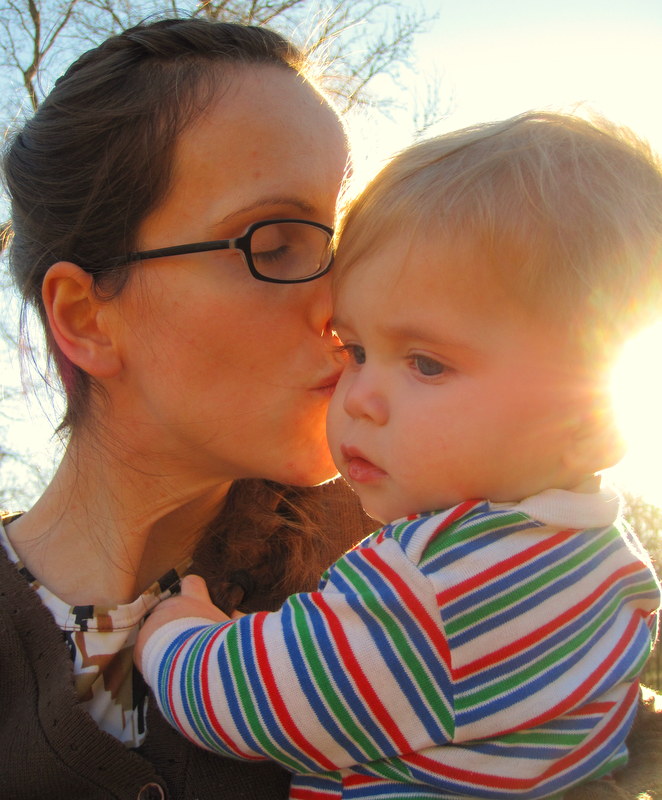 I taught the girls how to play Coloured Eggs. They both caught on quickly and enjoyed the game thoroughly.

On the way home they collected pine cones to put in our yard since our yard doesn't have any (rude!) and Rachel made Miriam carry them all because they were sticky. 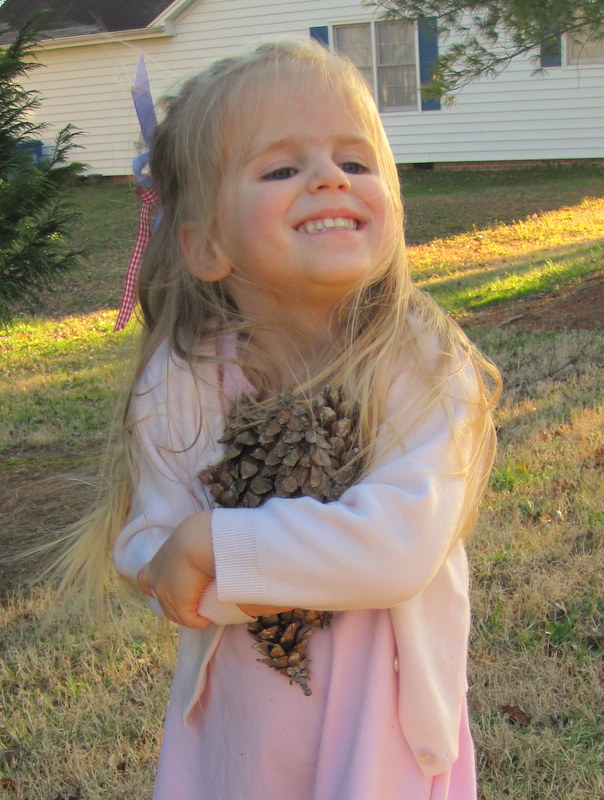 So while Miriam struggled all the way home, bearing her heavy load, Rachel was at her leisure to jump from one side of the ditch to the other. She ran circles around me, Benjamin, and Miriam. Literally. Miriam was shuffling along, ever so slowly, trying to keep the load of pinecones in her arms. Rachel had already beaten us home and whenever I'd get too many steps in front of Miriam she'd say, "Hold on! I'm getting separated back here!"

Andrew had dinner hot and ready for us when we got home; we let it cool off slightly while we skyped with my parents. Dinner was great—Andrew made pulled pork and baked beans (in honour of our living in the south). After dinner we got all jammed up for story time.

Rachel read to Miriam while I did the dishes. Then I read from The Little House to the girls. We're almost finished with the last book—Laura just gave birth to Rose. For some reason I always thought those pioneer women toughed out natural, unmedicated births, but Laura didn't! I'm assuming Laura was "relieved" with ether or chloroform:

She was being borne away on a wave of pain. A gust of cold, fresh air brought her back and she saw a tall man drop his snowy overcoat by the door and come toward her in the lamplight.

She vaguely felt a cloth touch her face and smelled a keen odor. Then she drifted away into a blessed darkness where there was no pain.

When Laura opened her eyes, the lamp was still shining brightly over the room....and in the bed by her side was a little warm bundle.

The bundle was the baby—Rose—and evidently Laura has no recollection of actually giving birth (an interesting discussion about this can be found here). Interestingly, Laura enjoyed being outside more than anything because she felt healthier outside than when she was cooped up in the house. Fresh air does wonders for me when I'm pregnant, too. I haven't ever gotten morning sickness, per se (ie: I've never thrown up due to pregnancy), but I have battled feelings of nausea and the best thing for that (for me) was a gulp of cool, fresh air.

Anyway, the girls were excited for Laura to get her December Rose. And then we had scriptures and prayer and the girls were instructed to brush their teeth and get into bed but that dissolved into games of laundry basket go-carts and toothbrush hair curling: 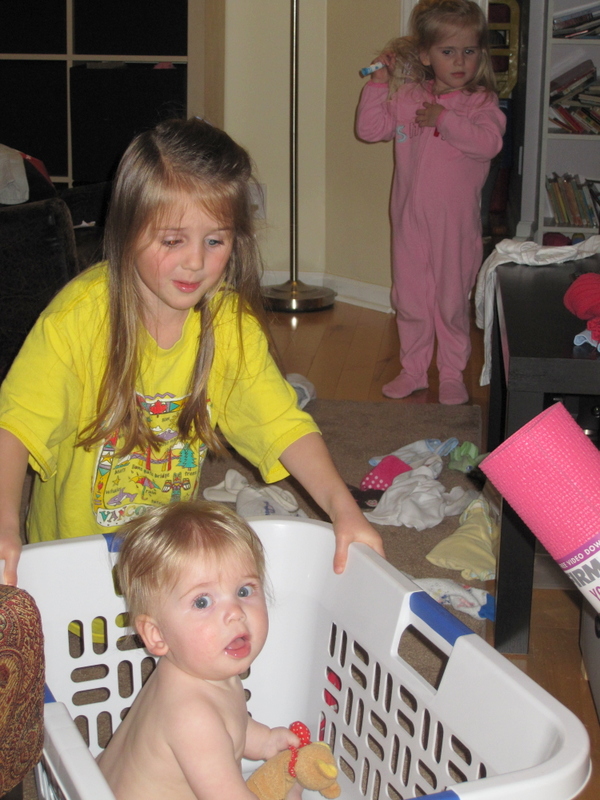 All that laundry scattered on the floor was once in the basket, folded, believe it or not. And I can't believe Miriam was using her toothbrush to curl her hair. How disgusting is that? 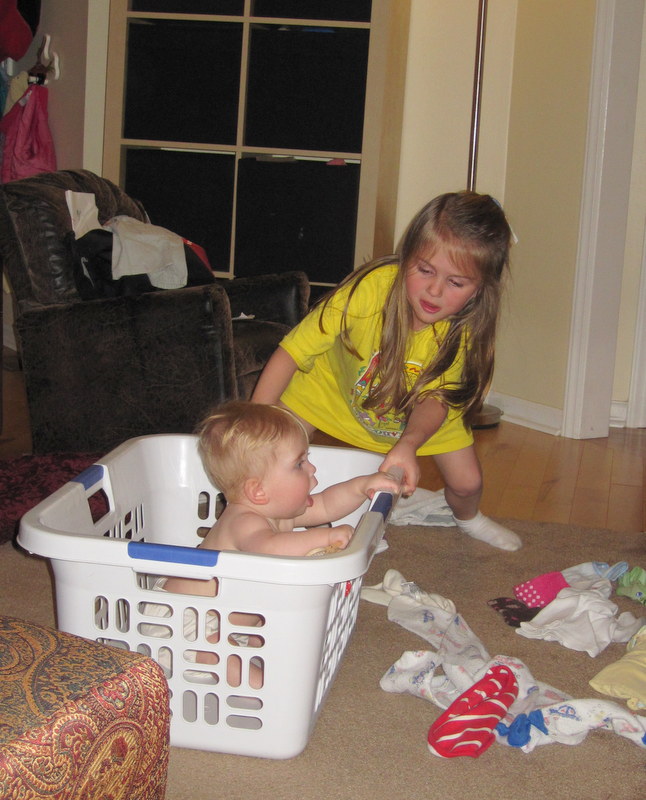 Laundry basket go-carting looked like more fun than toothbrush hair curling (duh) so Miriam asked if she might have a ride as well. 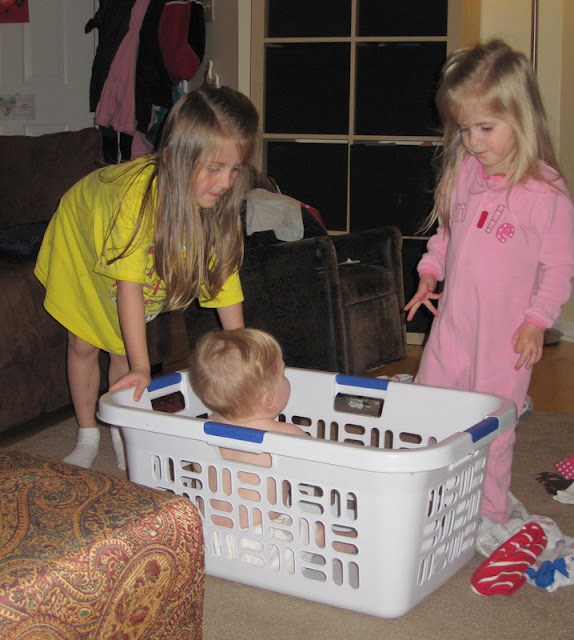 "Oh, alright!" Rachel sighed. "Hop in and try not to be too heavy." 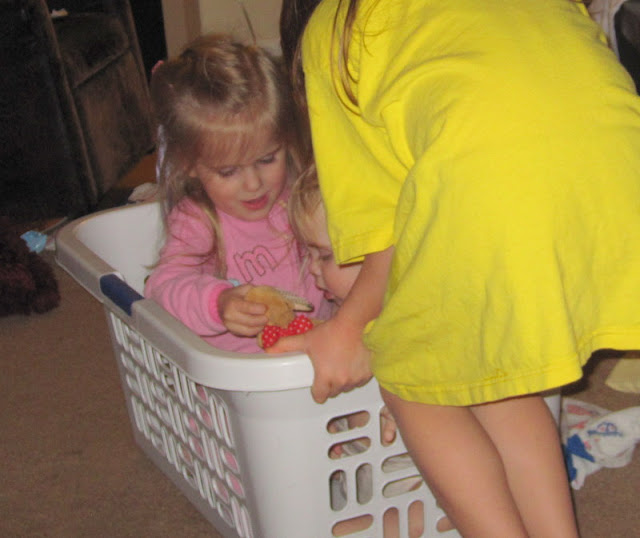 Unfortunately, Miriam found the ride to be less than thrilling. I guess she made the basket too heavy after all and Rachel couldn't push it as fast so Benjamin was left to enjoy his bedtime ride on his own. 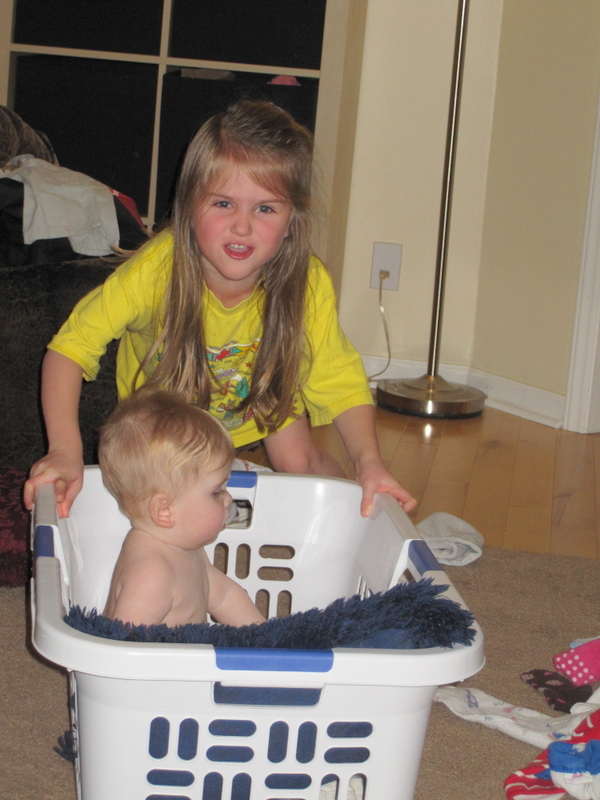