I feel like I don't have anything to write, which of course can't be true. There's always something to write about, isn't there? I think I remember feeling by Monday that Sunday had been ages ago and that I should probably write but I was so tired (because Benjamin didn't stop screaming and go to sleep until 3 AM on Monday morning) that when I found out that it was only Monday (still?) I decided that I could skip writing since Monday isn't that far away from Sunday. Now it's Friday Eve and I still haven't written since Sunday so I'll try to sum up the week.

Our blocks have paid for themselves several times over this week. They've been out every day this week, sometimes multiple times. 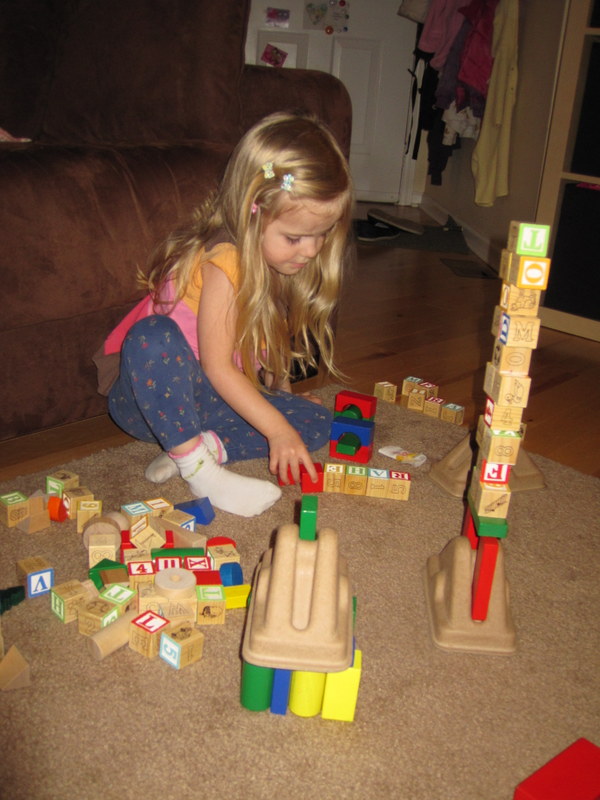 We had some friends over on Wednesday—friends we were meeting for the first time. A friend of some friends requested my friendship on facebook and since I like the friends she's friends with I figured she'd make a good friend. So she came over with her kids on Wednesday and we visited while her toddler toddled and her girls played with Miriam (Rachel was at school and Benjamin mostly just sat on my lap).

Miriam wanted to make a good impression so she brought me many pretty hair things and gushed, "I want criss-cross pigtails with all these!" 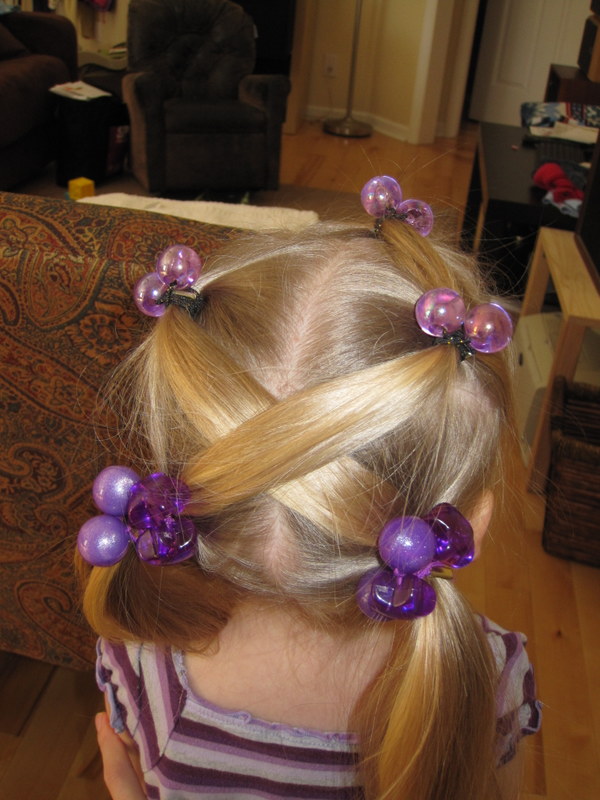 I don't know why putting those things in is so difficult for me. I've watched tutorials online. I've watched Grandma do it countless times. I've researched it and I understand it in theory. I just can't do it. (All thumbs, I guess).

Well, obviously I can do it. It's just an incredibly infuriating process and the end of the bobble that I'm holding usually ends up slipping out of my grip and slingshotting across the room or at the very least shooting backwards to smack my wrist or... Let's just say it ranks as "tongue-out" in the activity intensity scale. To ask me to do it once is grounds for a sigh. To ask me to do it seven times? That's unconscionable. But three year olds aren't exactly known for their ability to reason, are they?

A couple of weeks ago (when we last went to the Life and Science Museum (because that's how often I agree to put those things in their hair)) the girls begged me to put bobbles in their hair and I agreed to but it was hard and I began to run out of patience.

"Hold still!" I begged. "These things are so hard for me to put in!"

"Maybe if you were black," Rachel suggested.

"Well, my black friends always wear these so their moms must be good at putting them in!"

I'm sure the solution is as simple as changing my skin colour because it couldn't possibly be as complicated as, say, practicing more. They're simply not something my mom used often in my hair (though we did have a few stray bobbles floating around our house from a time when she did use them more often) and it's not a skill I picked up on. I'm sure that by the time Miriam's in kindergarten I'll be a pro (yes, I just gave myself 2.5 years to get comfortable with hair bobbles—I make lofty goals).

It's Black History month and Rachel's been learning all sorts of things about peanut butter and ironing boards and The Underground Railroad at school.

She had a pretty rough day at school. It was her friend Atziri's last day before moving (and she's her best friend (besides Malik, who is her very best friend)) and it was a rough day besides that. It was such a rough day that I got a phone call from her teacher in the middle of the day.

"Mrs. Heiss?" (That still sounds a little foreign to my ears—like, 'Oh, you're talking to me?') "I just wanted to let you know that Rachel had a little fall today so she's a little banged up. One of my more frisky students was running to line up for recess and he bumped into Rachel and knocked her over and she hit her head right on the corner of the desk—but she's fine. We sent her to the nurse's office and put ice on it. There wasn't any blood but there might be a little bit of a bump. I asked her if she wanted to go home but she said she would be fine for the rest of the afternoon."

There is a bit of a bump but it really isn't that bad, though she was in tears when she got off the bus (having said goodbye to Atziri at school; I suppose she cried the whole ride home).

She wrote this in her journal this evening and asked me some questions about freedom while she was doing it. The best was when I told her she should answer the question she posed—why the American flag represents freedom—she started writing away and then paused to ask me, "Where did the black people go for freedom. Like, they took an underground train somewhere. Where was that?"

"They went north," I said and meant to explain more (like the fact that actual trains were maybe not so much in the picture) but she ran off after a quick, "Oh, yeah!"

This is what she came out to me with:

"Except I'm not really free because you own me," she told me after I read her entry.

"Well, when can I be responsible for myself?" she asked.

"You're learning how now," I explained. "But, by law, you can be responsible for yourself when you turn eighteen. You don't have to buy your 'freedom' or anything. You just get it, but really it just absolves me from some of my responsibility to you."

"I can still live in your house though, right?"

"Sure, if you promise you'll be sweet and helpful and easy to get along with."

"Awesome! And then I can help you be responsible for Miriam because she's younger than me and won't be free yet!" Rachel beamed.

Rachel may have gleaned some incorrect definitions over the course of our discussion (and perhaps over the course of Black History Month—underground trains...) not the least of which was that "responsible party" is synonymous with "freedom crusher."

Speaking of crushing things, here's Benjamin destroying what was once a beautiful block city: 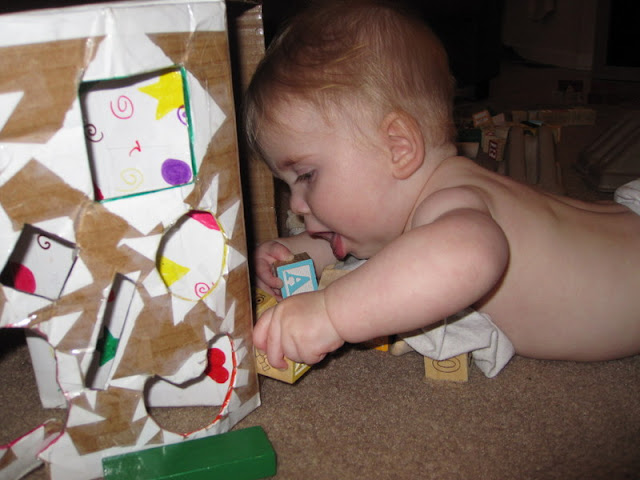 And here he is having some outside bouncing time while Miriam and I were playing in the yard: 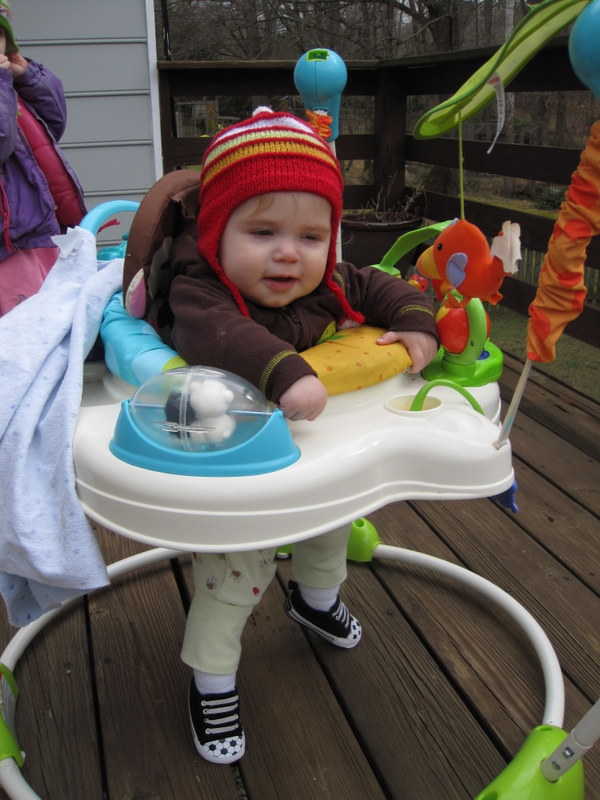 Miles put an apple slice in his mouth the way Miriam has it in the picture below. She wanted a picture of the two of them doing it together but when I said, "Okay, show me your apple smiles!" Miles took his apple out of his mouth, took a big bite of it, and smiled at me.

"No! Do your apple smile like this!" Miriam demanded, taking her apple out to explain and then replacing it to demonstrate what she wanted.

"I already did," he said simply. 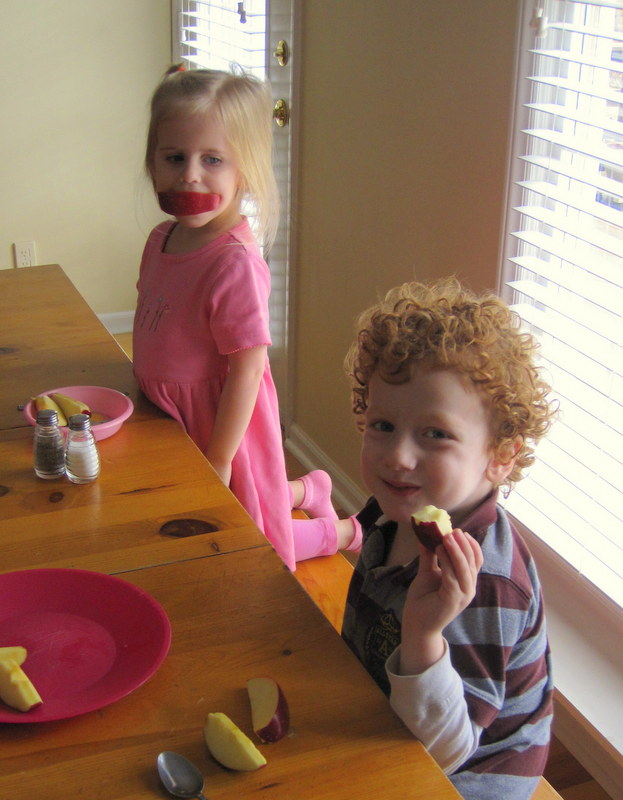 He was a hilarious addition to our household for the day. We started with a few rounds of memory because he didn't seem to sure about being at our house and I had read on his mom's blog that memory is a favourite of his. After we got the game all set up I said, "Would you like to go first, Miles?" and he said, "Yeah. Because I'm the best at this game!"

Later we went to play in the backyard (after scrounging up a sweater big enough for Miles to wear, along with a hat (because Miriam wanted to wear her hat and Miles thought it looked cool, I suppose)) and he saw some playthings that looked very familiar to him.

I didn't tell him that we were the ones that took them away. His family is getting ready to move and were offloading some of their big backyard toys so we adopted a few of them. We've adopted several things this month.

Andrew brought home an exercise bike today. We've been hunting through Craigslist to find a good deal—it's surprising how fast things get claimed! When we got a positive respons—"Sure! Come pick it up today!"—we almost didn't know how to handle it. Eventually we got over the shock and accepted the reality that we'd actually found an item we wanted on Craigslist—a miracle!

We tried it out this afternoon—on high—and it didn't feel that difficult to pedal. So Andrew sat down and "rode" for a mile and then challenge me to do the same and after doing that I can testify that it's going to offer us some brilliant workouts. 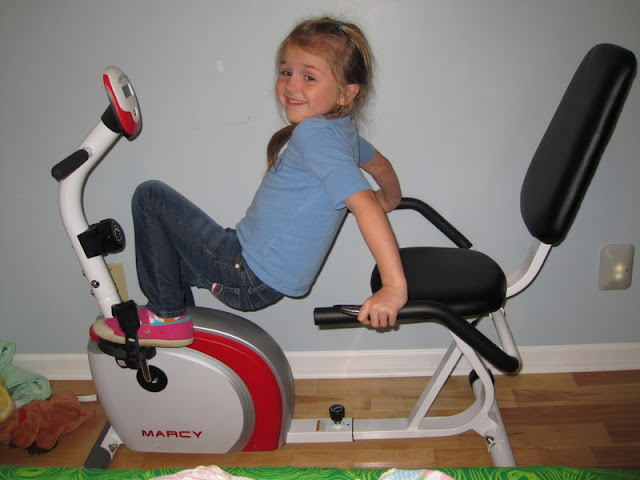 Even with the chair in the shortest setting possible she can't reach the pedals and instead balanced her whole body on her arms while she pedaled.

After the kids (minus Benjamin, who just barely fell asleep and is sprawled all over me) went to bed Andrew and I sat down to watch Psych together—a forty-five minute commitment. Andrew decided he was going to bike the whole time (I warned him that 45 minutes might be a little much for the first go) and when he tried to stand up after the show his legs were so wobbly that he had to sit back down. We were both laughing so hard that tears were streaming out our eyes. I'm sure he'll be hobbling tomorrow.

One of the perks about recumbent bicycles is that it doesn't wear out your frame while you exercise—so your back/wrists/whatever doesn't get sore, for example, which means you can exercise longer. In this case, having his body tire out from being on an uncomfortable bike seat might have been an advantage!

So, that sums up our week. It was fairly par for the course, I suppose, in that it was boring and exciting, ordinary and unique, long and short, all at the same time.
Posted by Nancy at 1:32 AM