So, surprise! We went to Washington DC this weekend!

Our plans were a little up in the air until the night before we left because the friend we'd been planning on staying with has two little boys and those two little boys got sick with a stomach bug and she didn't know that we wanted to be there in the throes of, well, throwing up. We very nearly went camping at the Outer Banks (where we could have seen a shark feeding frenzy—too bad we missed that) instead but after much discourse we decided to postpone our trip for a day and still head up, so on Abra's birthday we loaded up the car and headed north.

Washington was clearing out for the weekend so we took our chances and headed straight into the city center. There was plenty of (free!) parking at the Arlington Cemetery so we wandered around there for awhile before walking from Virginia to DC proper. 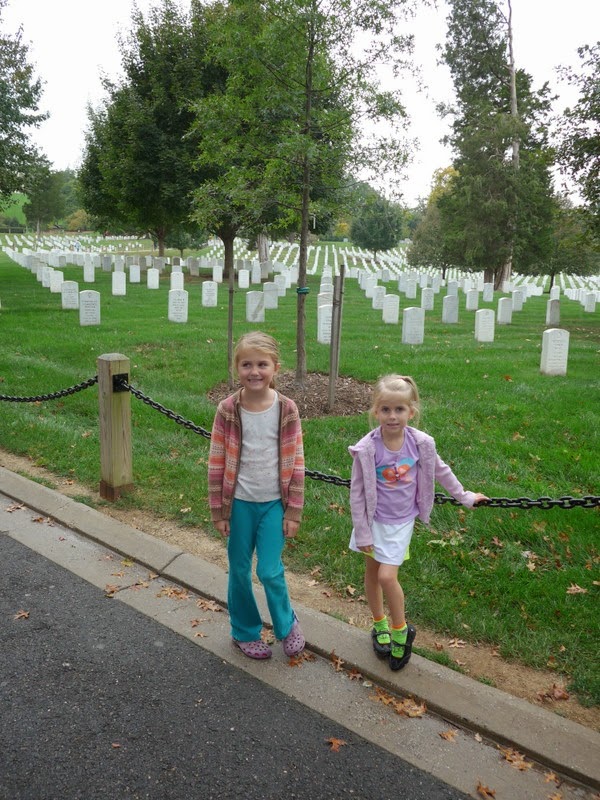 We visited the Tomb of the Unknown Soldier, which actually has the remains of an unknown soldier inside (we thought it was purely symbolic—and it is symbolic, but there's an actual body enshrined within also). We also visited the John F. Kennedy Eternal Flame. 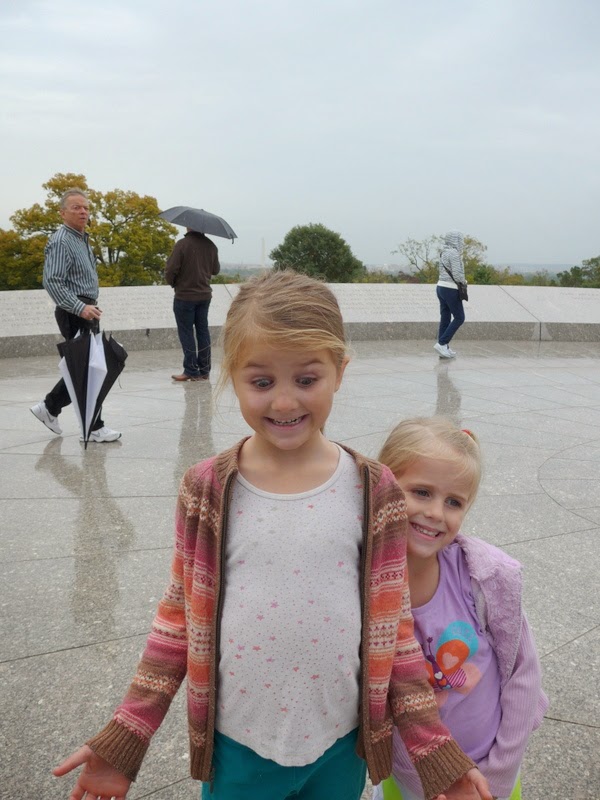 We headed back to the car after visiting those two sites, but only to make some peanut butter and jam sandwiches and to throw on some more layers. It was colder and wetter than we'd been expecting. When we were fuller and warmer we headed across The Arlington Memorial Bridge to the Lincoln Memorial. 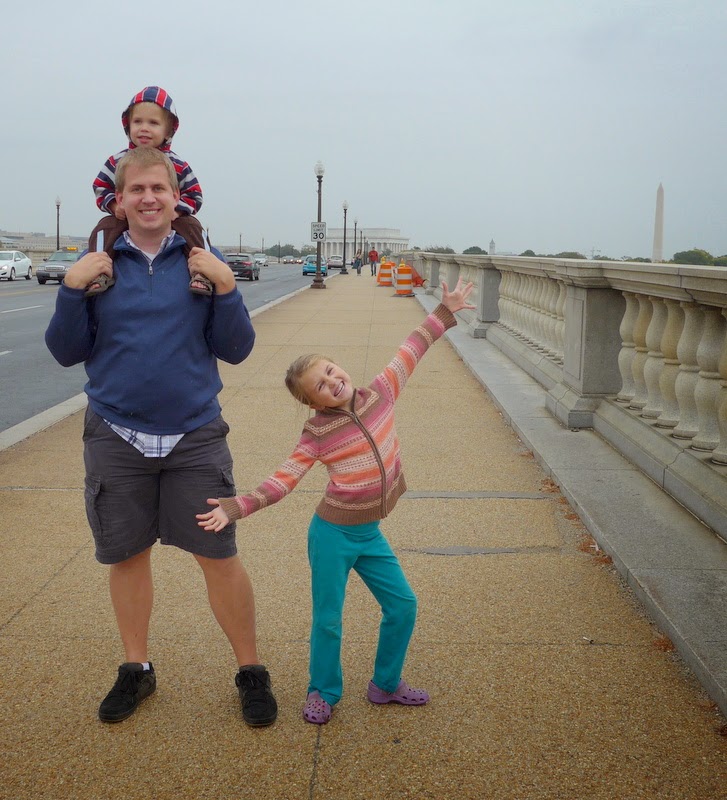 Benjamin loved riding on Daddy's shoulders and looking out over the Potomac River. He said he saw a few sharks and I asked him if they were scary and he said, "No. Sharks not bite me. Sharks 'ike me!" He's a pretty likable boy, so I'll take his word. He also loved the traffic on the bridge (the girls did not), especially the busses. "City bus say, 'Tchooooooooooo!'" he'd squeal, mimicking the sound of the air brakes. He also started making siren sounds this trip—we saw a lot of emergency vehicles. 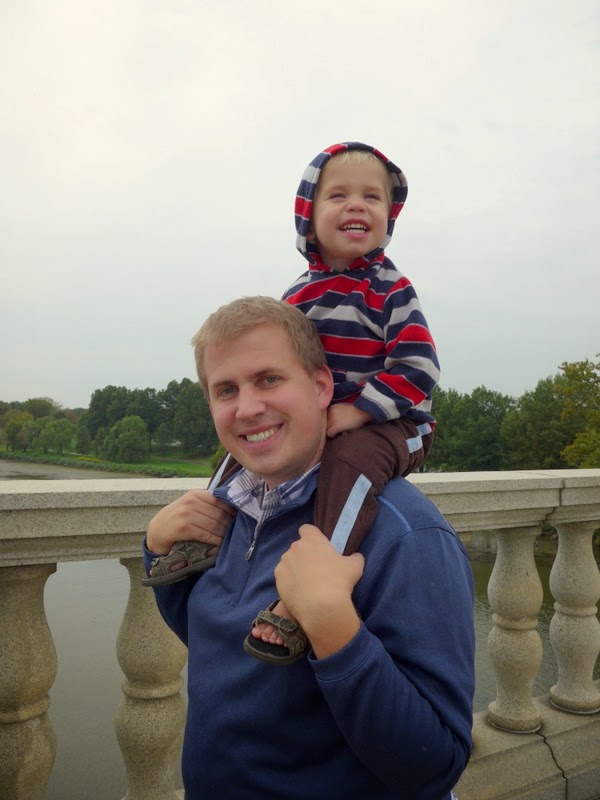 We took the elevator up to the chamber of the memorial, which was a nice little rest after our walk across that bridge. Rachel was such a trooper—she was the only one of the kids to walk (mostly) the whole day. She was pretty exhausted already and we still had a long way to go! 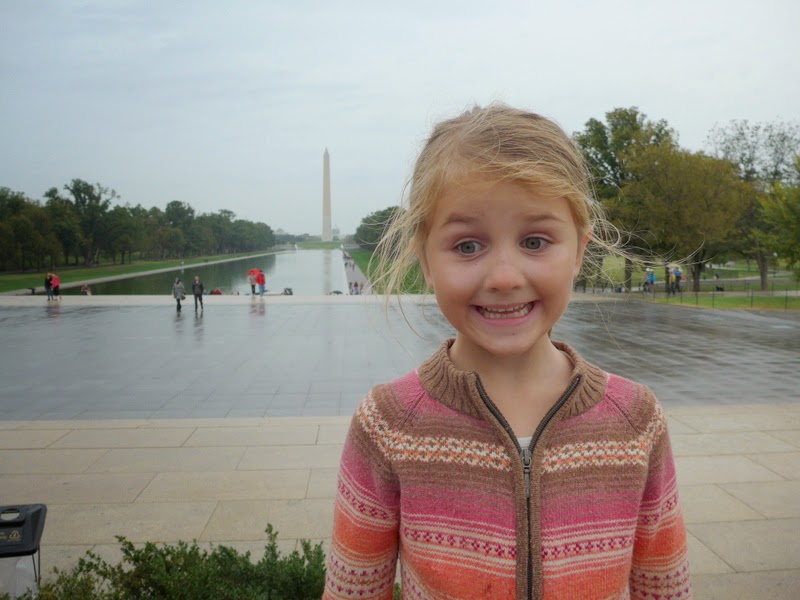 Here are the boys by the statue of President Lincoln. I had just taken a picture using Andrew's phone so he could post it to Facebook and he was just looking at it when I told him to put his phone away so I could take a picture with the real camera (because I'm old-fashioned like that). I accidentally caught him obediently saying, "Okay," as he put it away (my finger can get a little trigger happy). I think this picture is hilarious: 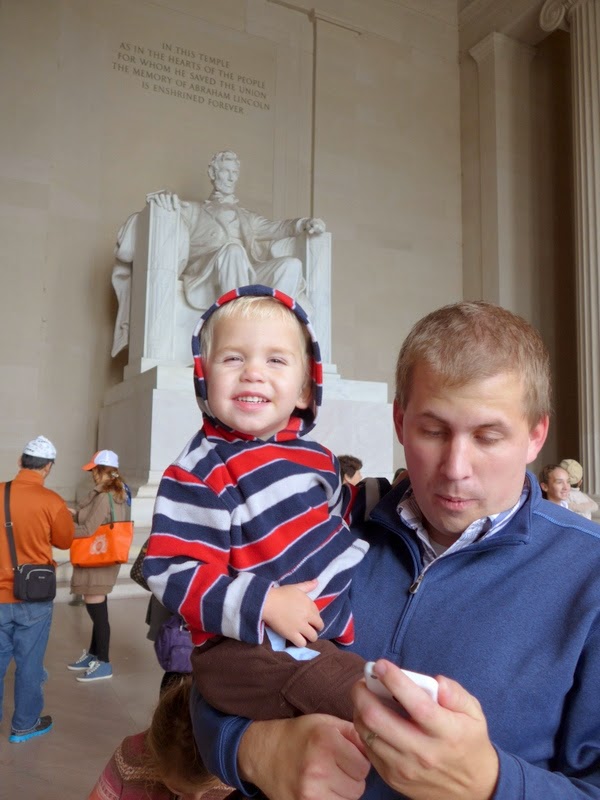 But this one's a bit better: 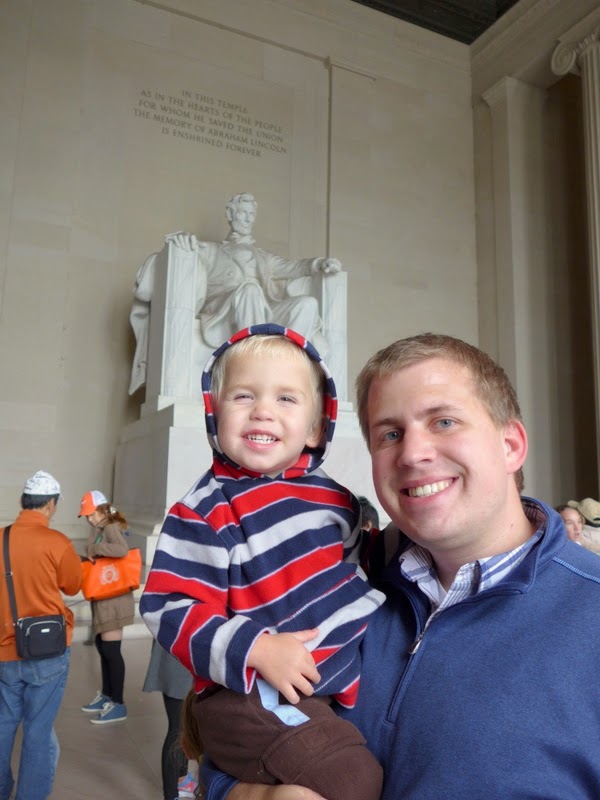 And here's a picture Andrew took of everybody: 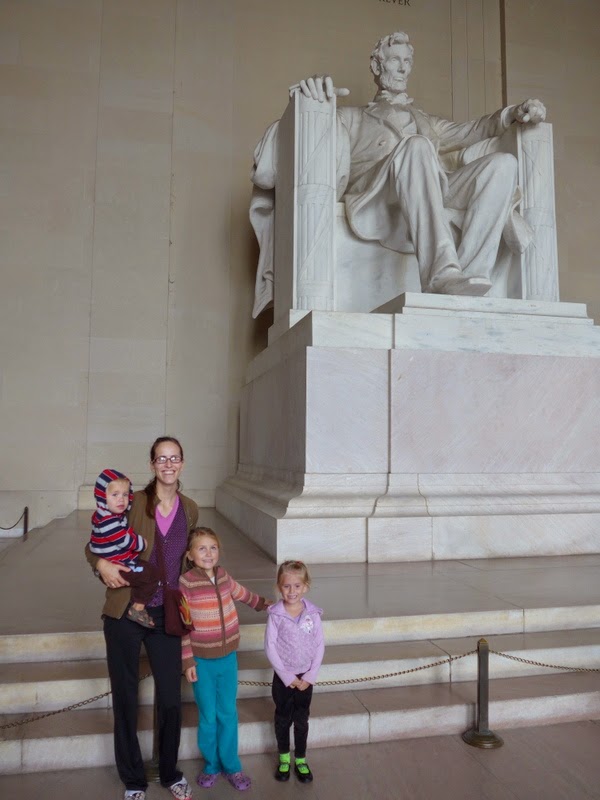 We walked down the stairs and counted them (again) but I'm not sure I could tell you how many there were (though Rachel probably could). Remembering stuff like how many stairs we counted on the way down from the Lincoln Memorial is getting harder and harder these days. I like to believe it's because I have more important things to think about. But it might just be because my brain is on a red light.

Here are my charming children looking very grown up: 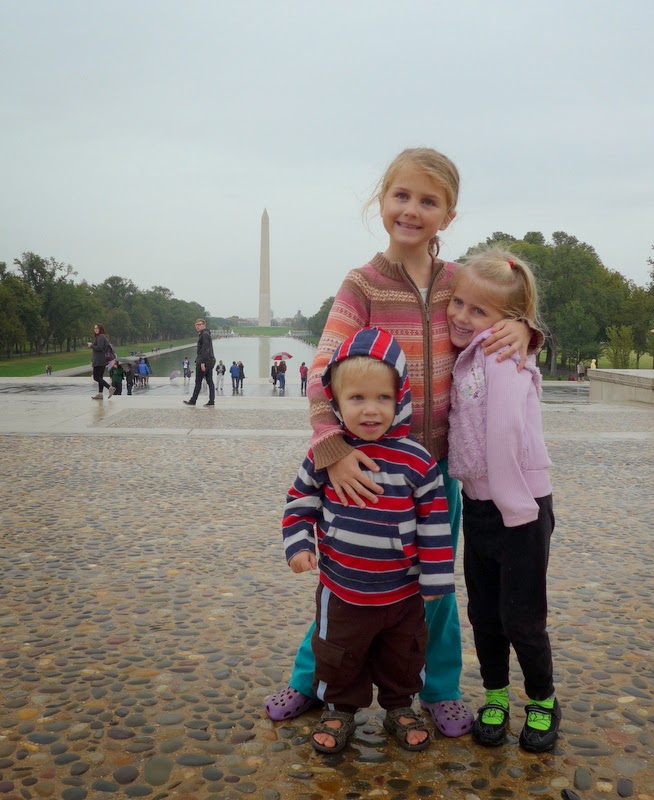 We walked from the Lincoln Memorial all the way to the White House. Rachel immediately slipped on the marble-ish sidewalk and landed on her rear end. She was so embarrassed because she was worried that either President Obama had seen her fall or our host (who works for the government) had seen her fall. I assured her that President Obama was out of town and that I didn't recognize anyone nearby so she was probably okay. This poor girl was a klutz this trip. I think she fell over at least once every single day. 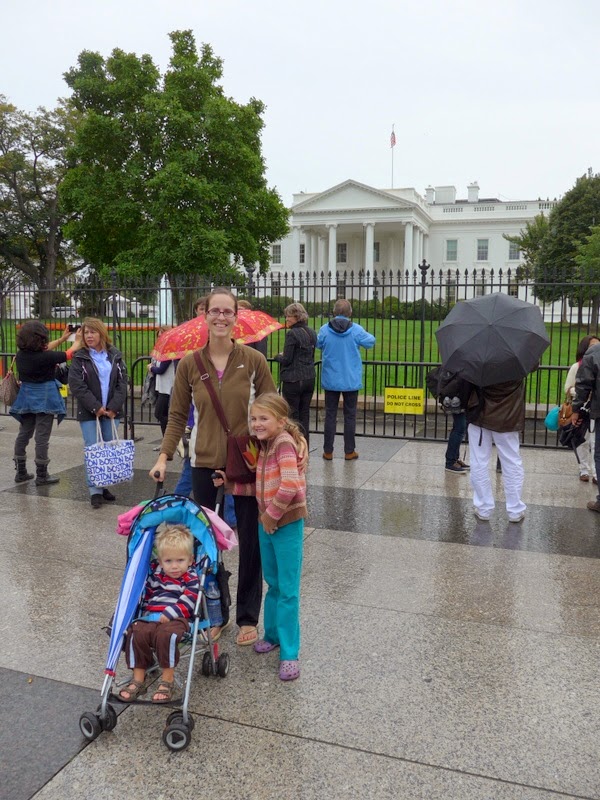 Here's a picture of Daddy with Miriam on his shoulders and the White House in the background: 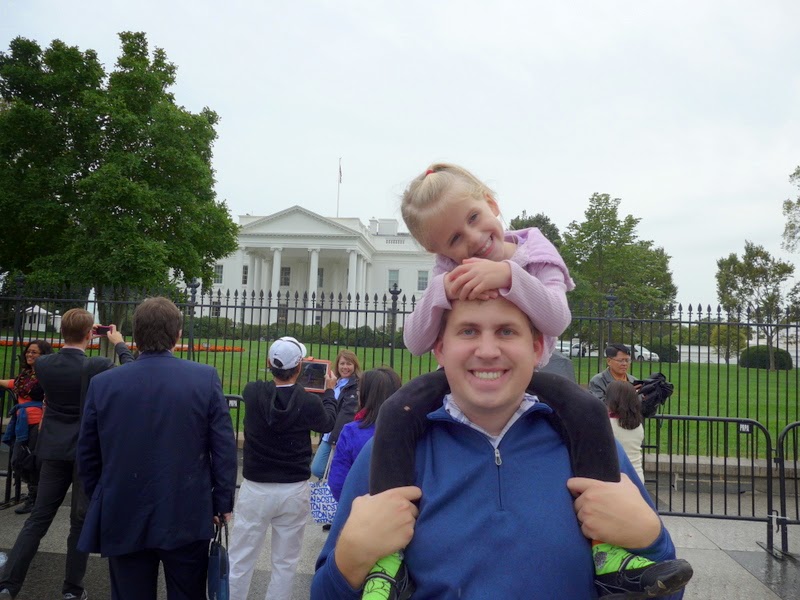 But I also love this picture so you get to see it, too: 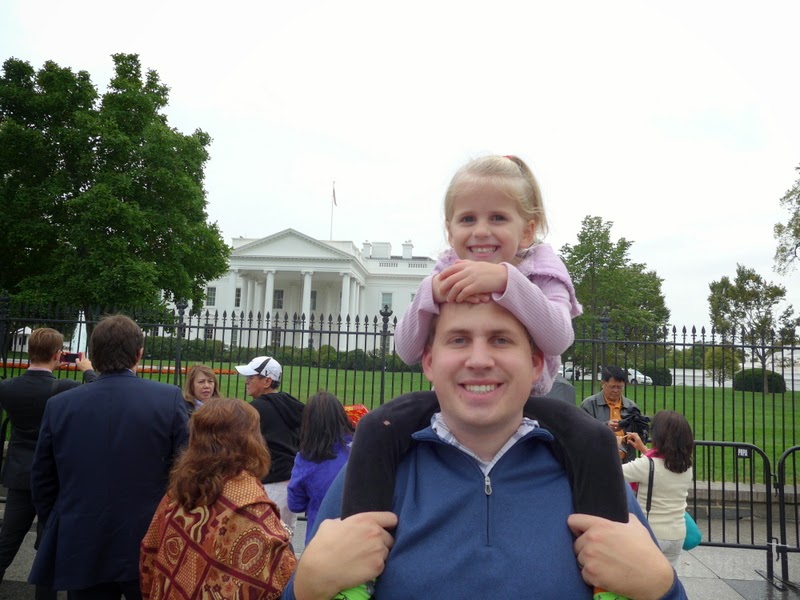 And here are the girls hanging out at the back of the White House... 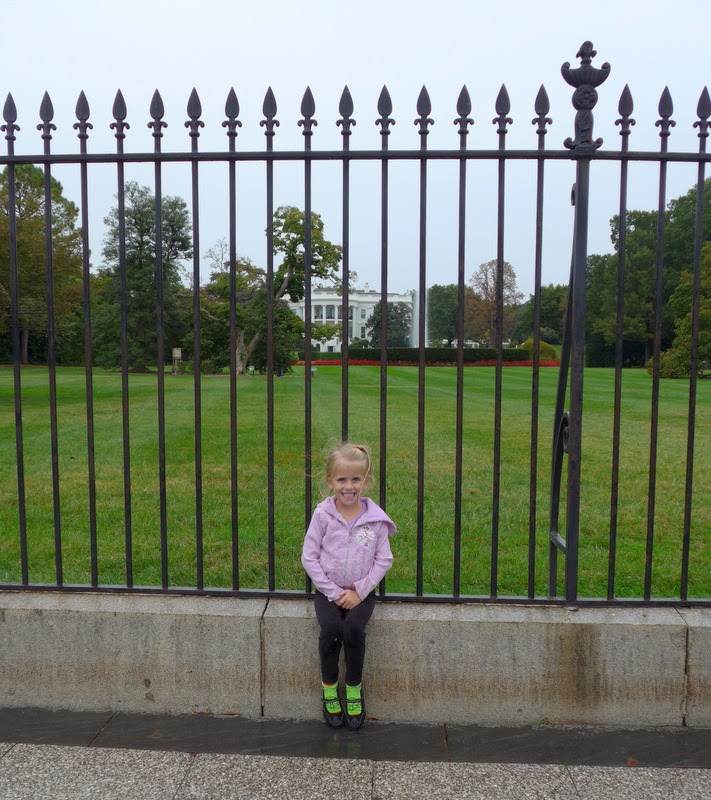 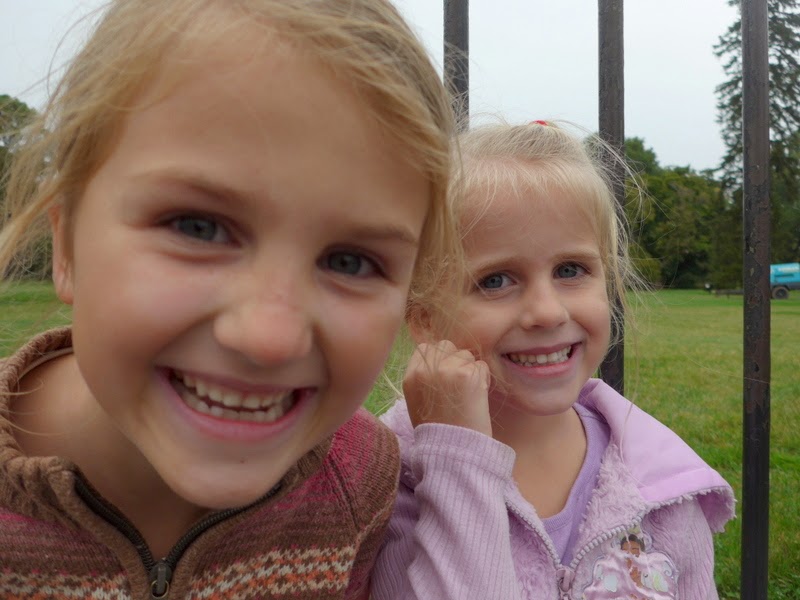 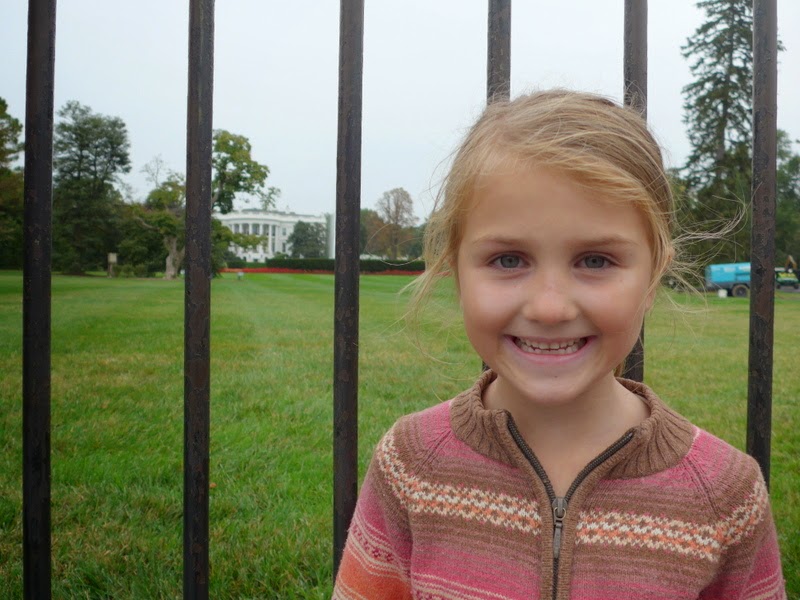 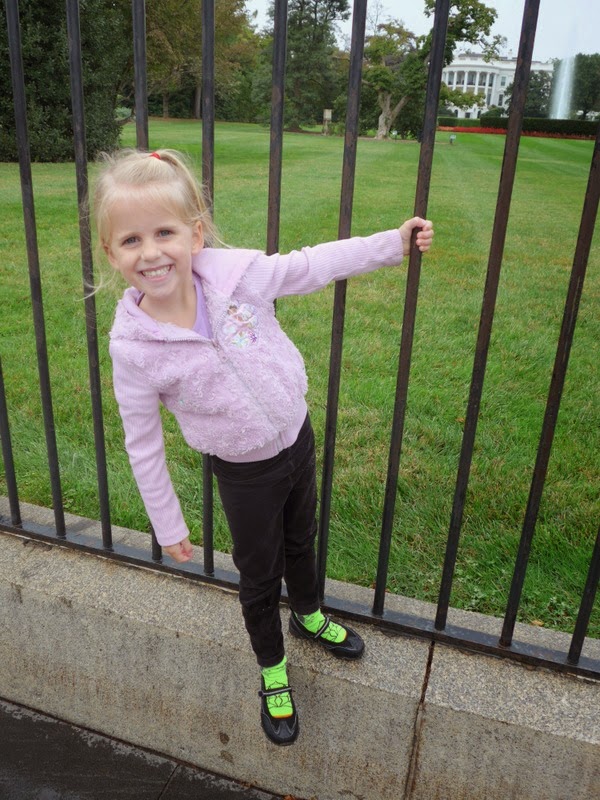 Benjamin kept screaming, "Me, too!" from his stroller. Sometimes we forget that he needs pictures of himself at places, too. He was just tucked away in the stroller; out of sight, out of mind. 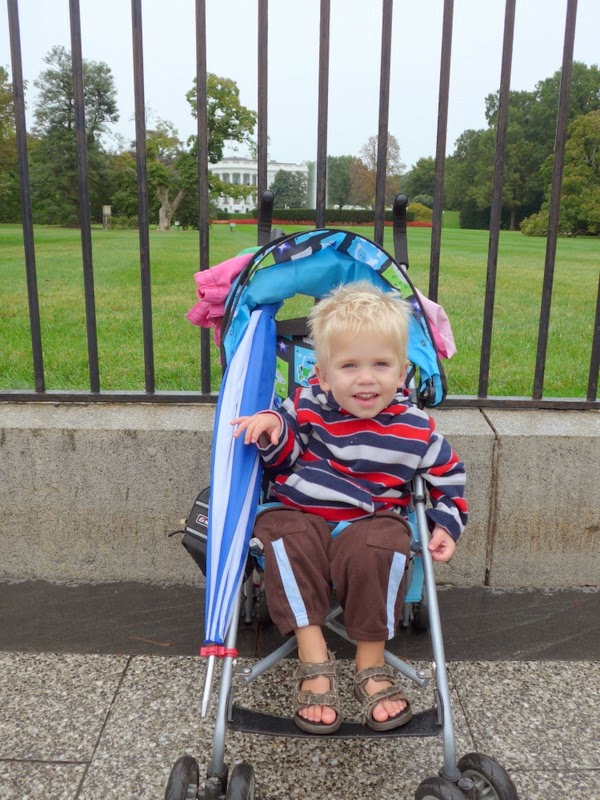 Dragging the children back to the car after visiting the White House was quite the ordeal. They were both so tired of walking, but so was everybody else. Here's everyone but me walking along the path by the Lincoln Memorial Reflecting Pool: 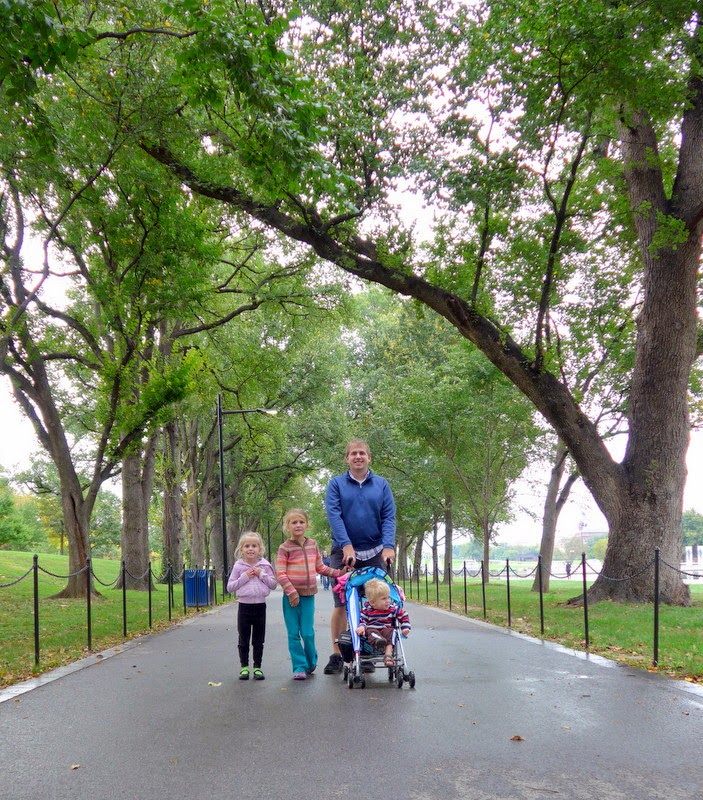 And here we are, finally at the other end of it (and still alive!): 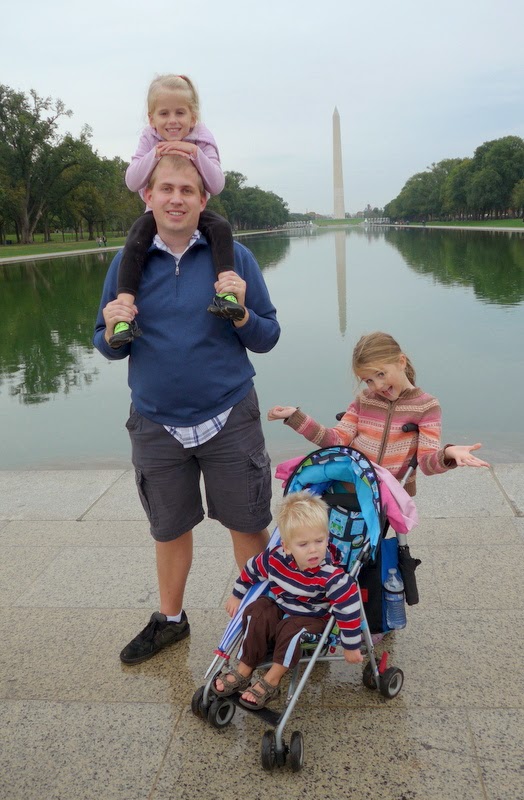 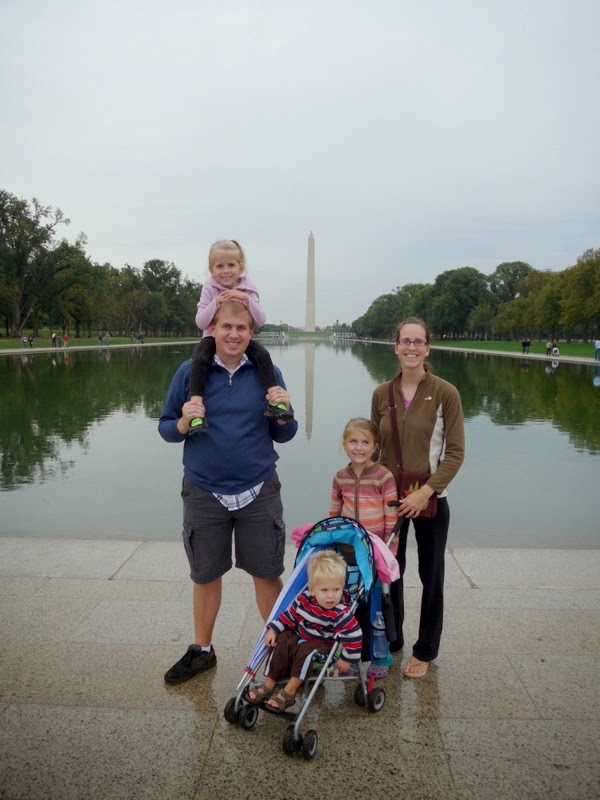 Rachel begged and begged for a shoulder ride but after a long day of alternating between having Miriam or Benjamin on his shoulders, Andrew was worn out! He finally relented when we were back in Arlington (and only for a few paces). She's getting too big for this stuff. 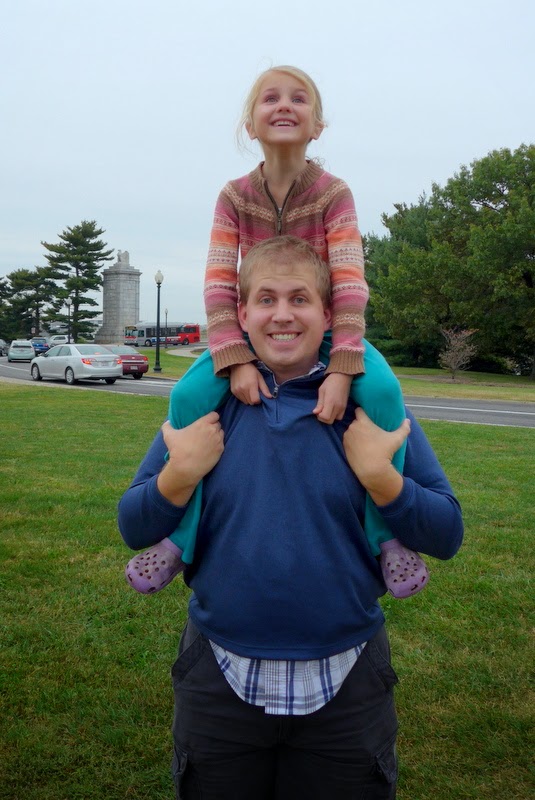 We grabbed some dinner and then headed over to our friend's house where there were some very excited—and mostly healthy—boys waiting to meet us. My feet had never been so happy to crawl into bed (after catching up with Caitlin until 2:30 AM).
Posted by Nancy at 10:55 PM