This first week of intercession hasn't been my favourite. Maybe it's my fault for not planning a million activities to keep the kids entertained 100% of their time. But I honestly don't feel like planning a million activities to keep the kids entertained—that's what they have each other for (and their books and toys and yard and billion other things we're blessed with). I especially don't feel like taking them anywhere or doing anything with them when they're on the brink of fighting 100% of the time.

You know those cartoon fight clouds that completely obscure the actual fight from innocent viewers?

My children have been stuck in one of those clouds all week—only their cloud is invisible.


I can't take them anywhere because leaving the house doesn't exactly seem to make the fighting stop. Of course, we've only left the house to go to the dentist, doctor, and preschool (which was cancelled (giving them reason to grump at me for waking them up and forcing them to get ready in the morning when they could have slept in)). Perhaps if we went somewhere a little more exciting they'd put their differences aside. Who knows? All I know is that all this fighting is wearing me out.

We went outside this afternoon, hoping to get some of our wiggles out, but then it started drizzling and the girls declared it was "too cold" to play outside (it was over 80°F, just so you know). We came inside to find a game to play but then no one wanted to help clear any surface in order to play. Miriam suggested we just play on the driveway—we wouldn't have to clean that off! I reminded her that there was water falling out of the sky.

"Then we can play a waterproof game," she suggested snarkily.

Instead of taking up her suggestion I cruelly forced the children to help tidy the living room and the kitchen table zone so that we could have our pick of play places.

When we were finished we settled down on the living room floor to play HedBandz, which Miriam eventually got the hang of. She was so funny at first. There's a card with suggested questions, which I passed out to everyone. Then I explained that you wanted to ask as many questions on your turn as possible so you could be the first to guess your card (if you guess your card before the timer runs out you get to pick a new one and start guessing again).

She got the first turn since she was the youngest player (except for Benjamin who, although he was eager to wear a headband like everyone else, was a little young to actually play). She picked up the card with suggested questions and started blazing through them.

"STOP! You're an animal, remember. And you're still not letting us answer your questions."

"I don't think you can swim," Rachel said.

"I think she can probably swim. I don't see why not," I said.

"Fine," Rachel said, rolling her eyes at me. "Let's just say...scientists haven't yet determined if you have the ability to swim or not."

"They probably actually have," I said. "Let's just say that whether or not you can swim isn't important to figuring out what animal you are."

She finally guessed correctly when I mentioned something about "YOU LIVE ON A FARM!" and then after she guessed "Tractor?" and I reminded her "YOU ARE AN ANIMAL THAT LIVES ON A FARM!"

She was a pig. Pigs can swim.

The suggested age for the game is 7+ so I suppose it shouldn't come as a huge shocker that Miriam struggled a bit with the concept of the game. Rachel got it, though, which is more than I can say about the last time we tried playing with her!

I asked them to get close to each other and joked, "Pretend you like each other." I didn't turn the flash on because I expected them to sit still and smile for half a second. Obviously that was too high of an expectation. If you look hard enough, I think you can see the fight cloud that's been surrounding them... I turned on the flash and asked them to "please, please, pretty please tolerate each other for one single picture." And they did (though you can still see the annoyance on Rachel's face—Miriam wanted to cuddle with her (Rachel didn't want to be cuddled against)). 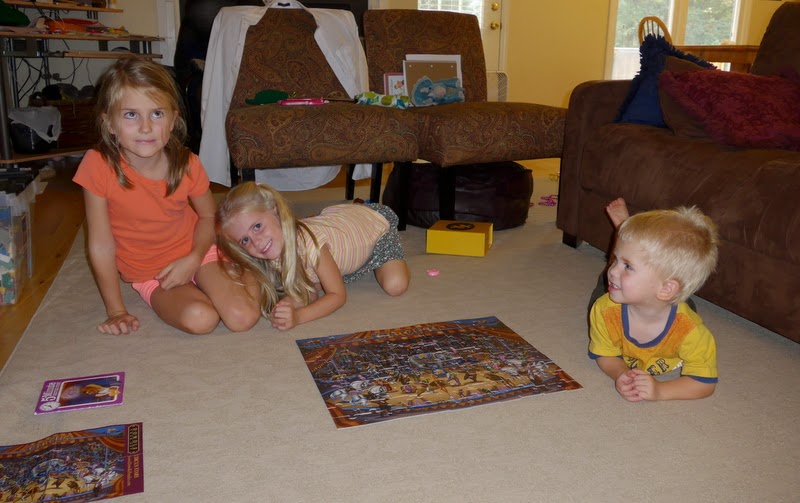 Then Rachel went to have alone time in her room and came out to show me her journal. She likes to write through her feelings (must be hereditary).

Otober 2 (the day before I get my cavity filled)

Today was not a very good day. In the morning I had to wake up realy early to bring Miriam to preschool. But Sister Lewis is out of town. And at night I could not go to sleep because Miriam was laying on me and my blanket. And I probly will not get to watch Harry Potter and the Deathly Holows for movie night. Because I have to get my cavities filled. So I have to wake up early to get my cavities filled.

Can you just tell her life has been ruined? I don't even know how she's going to cope.

Fortunately, Rachel's very good at putting past problems behind her so I know she'll rise above the challenges of the last few days. She'll find her happy place again and will enjoy being home, spending time with her siblings. She can be a great—and fun—big sister when she puts her mind to it (and then once her mind's been put to it she can stop trying because it just comes naturally).
Posted by Nancy at 11:38 PM