Miriam had a pretty quiet birthday but she loved every minute of it because Grandma and Grandpa are here! The girls woke up bright and early (7:30—on a Saturday, after staying up late due to picking up the aforementioned grandparents at the train station and then getting all hyper because they're here!) and had breakfast with Grandpa and then hung out with him while everyone else slept.

We went to the library after everyone got up since we'd run right out of stories.

Then we got ready to go to Rachel's penultimate soccer game for the season. Her team creamed the other team—the final score was 6 to 1—but the other team only had four players and our team had seven, so while we still only played four at a time we were able to give the girls plenty of breaks. The other team was exhausted. But I think everyone had fun.

Here's Rachel and Rose in their soccer uniforms: 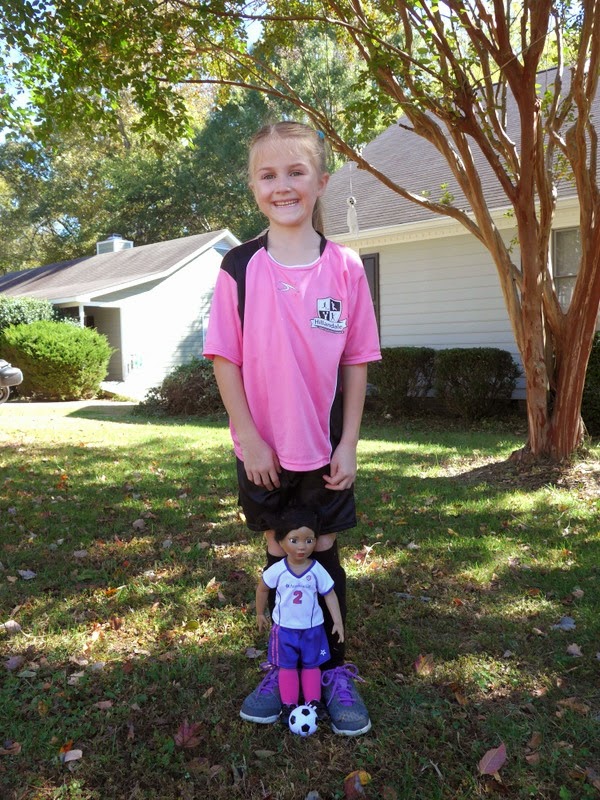 Grandma went to the American Girl Doll store in Chicago and got a ballerina outfit for Kit and a soccer outfit for Rose. The girls were quite excited about these presents.

Benjamin spent the soccer game playing his own soccer game with another Pink Panther little brother for the first half, and going to the playground with Grandpa on the second half (Grandpa watched the first half of the game and got to see Rachel score the opening goal—that was exciting).

Miriam went shopping with Grandma for birthday cake supplies. We skyped with Grandma weeks and weeks ago and Grandma mentioned off-hand that they might come out in October and Miriam squealed, "Then you can make my birthday cake!" and has believed ever since that that was the plan (even though Grandma and Grandpa's plans weren't solid until recently).

We came home for lunch. Grandma made "Grandma Quesadillas," another request of Miriam's. Grandma Quesadillas are basically regular quesadillas...but made by Grandma. Apparently they taste better. Cheese inside tortillas, melted on the griddle. That's it. But Grandma does it best.

We also opened a special present from Daddy. Here's Miriam, following the instructions on the package—counting to 100 with her eyes closed before finding Daddy outside: 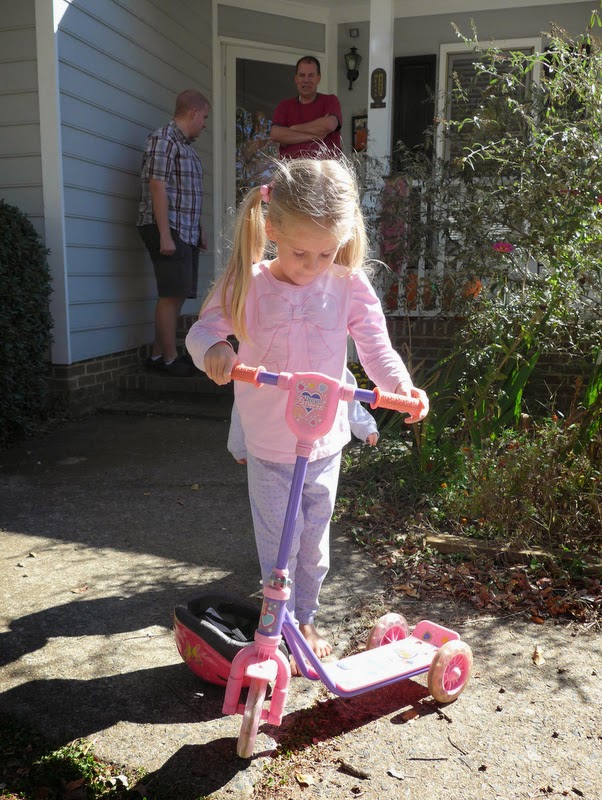 "This is just what I wished for!" she said.

A few weeks ago she was playing outside with all the neighbour girls. They all had their sets of wheels—scooters and bicycles and tricycles—and Miriam tried our neighbour's scooter and loved it. After she took it up and down the street she gave it back to our neighbour and came up to where I was sitting on the front steps. She sat down, took my hand, and said, "Mom, for Christmas...do you think I can get a scooter? With three wheels, not two? I just...I just love those." 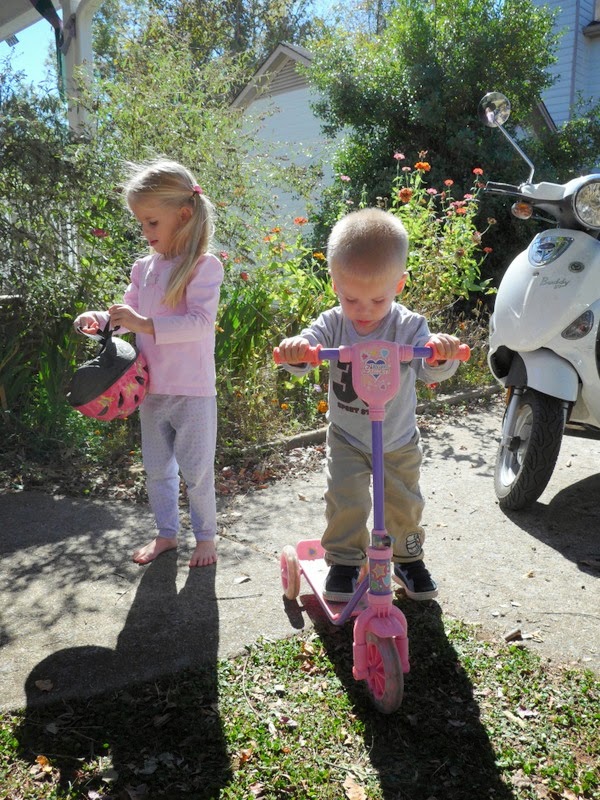 We might have to look for another one for Benjamin because he tried it out and loved it, too. But at least they don't have to fight over the pink tricycle anymore (we got Benjamin his own tricycle but the seat's so tall he can't reach the ground so he prefers Miriam's big-wheel-style trike...the problem being that so does she). 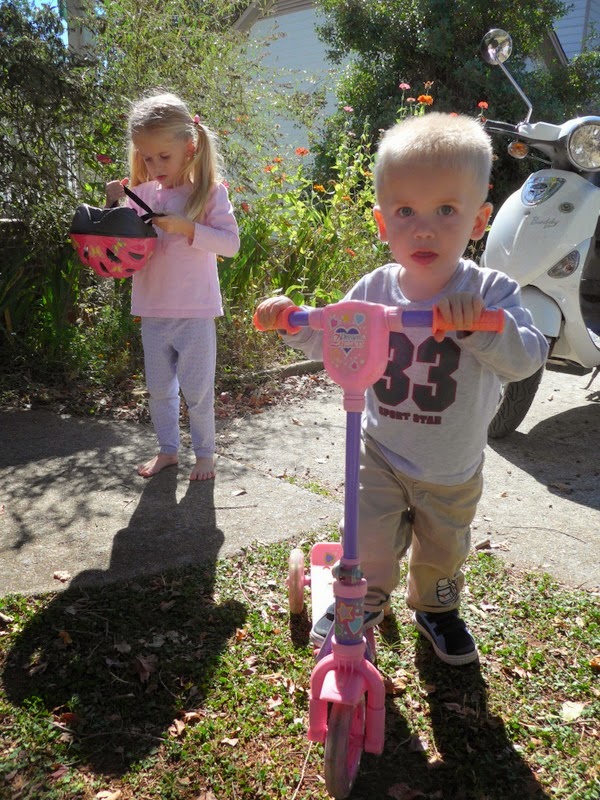 Here's Miriam taking it out for its first spin: 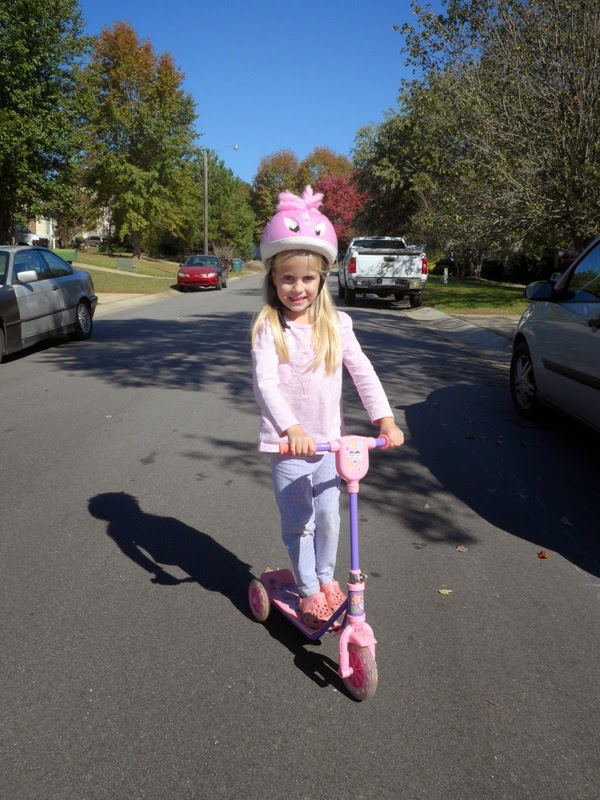 After playing outside for a while, Benjamin and I retired for an afternoon nap. I don't know how long the girls stayed outside with Grandpa (Rachel on her bike, Miriam on her scooter), but I think they also eventually came in for some quiet time.

Grandma and Grandpa took us out for dinner at Cracker Barrel... 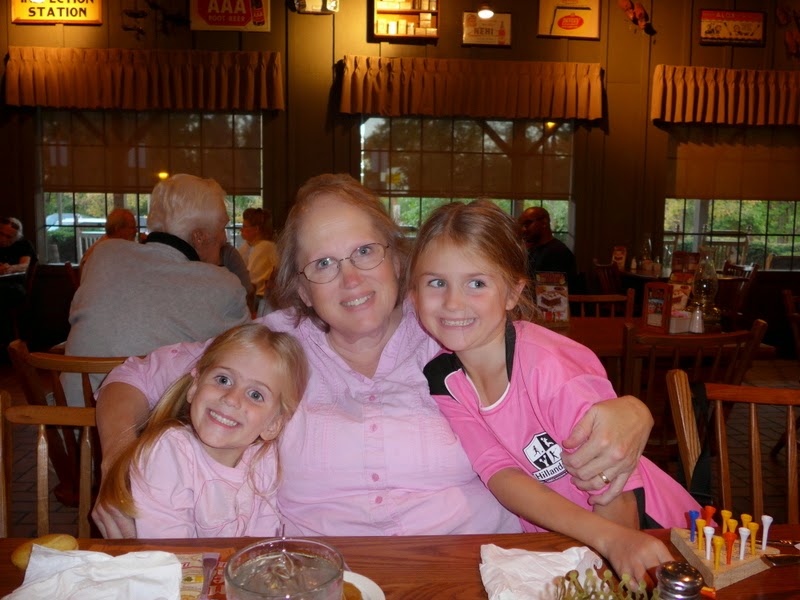 ...and Miriam got a free dessert because it was her birthday! 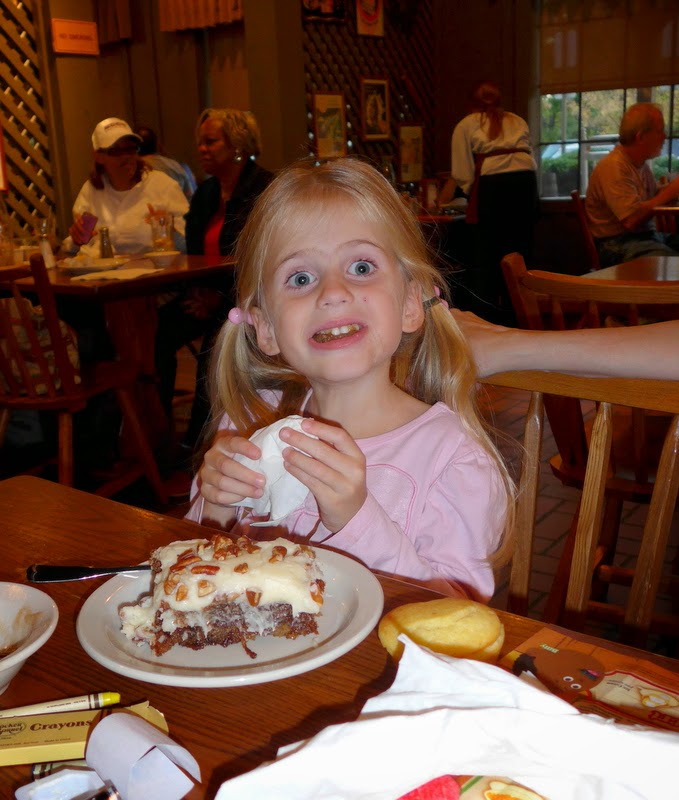 I helped her choose carrot cake so that I could eat her leftovers (she was so full of macaroni and cheese and fried apples that she could only take a bite or two) because she'd chosen a chocolate-chocolate-chocolate cake for her birthday (which meant that I wouldn't have any).

We were all so full that we decided to open presents before having cake. Miriam loved everything she got. A card with money from Naanii and Bumpa... 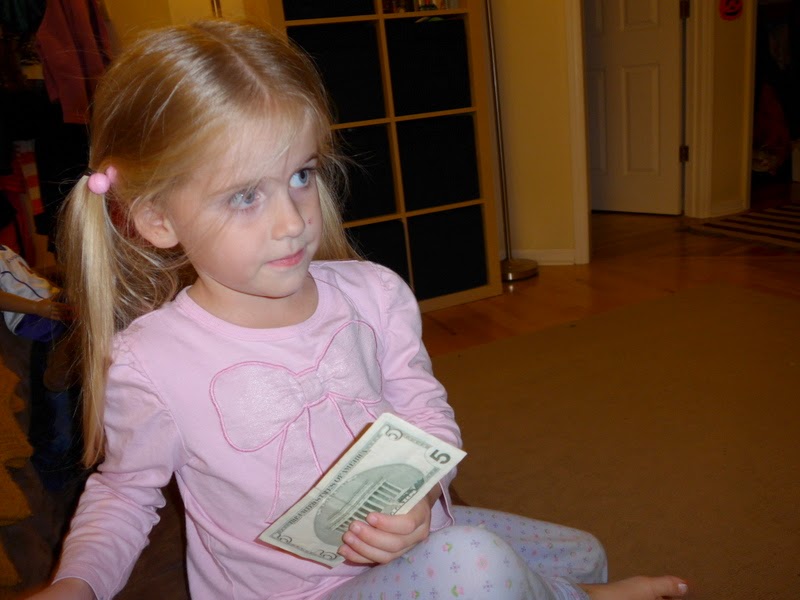 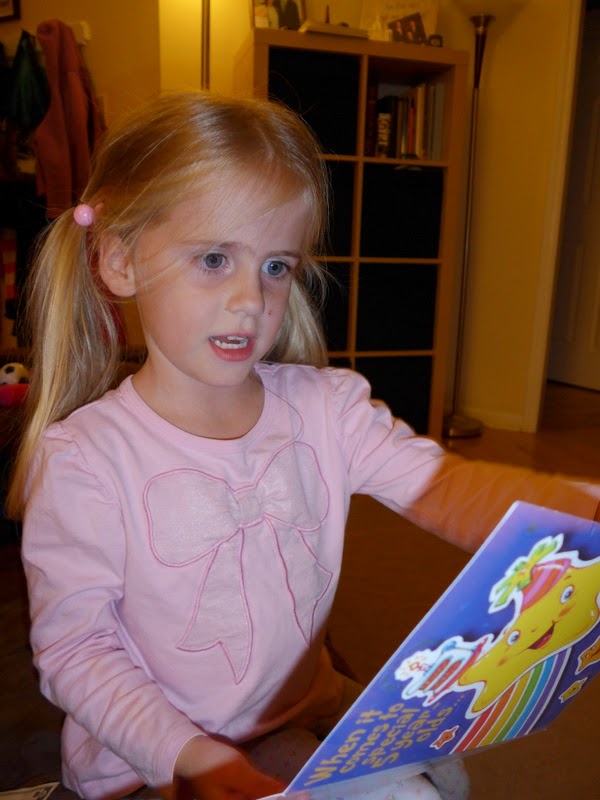 An 18-inch doll from Grandma and Grandpa (she named her Anna): 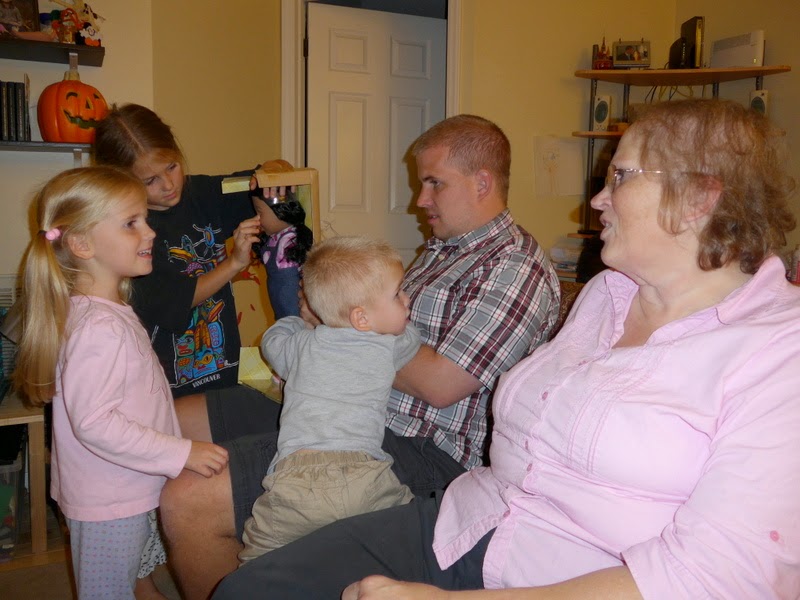 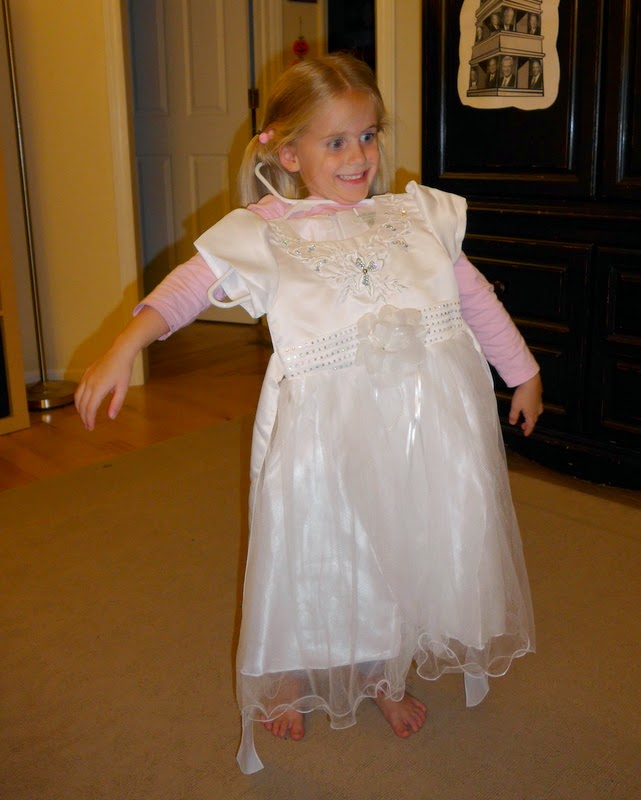 And an umbrella to match... 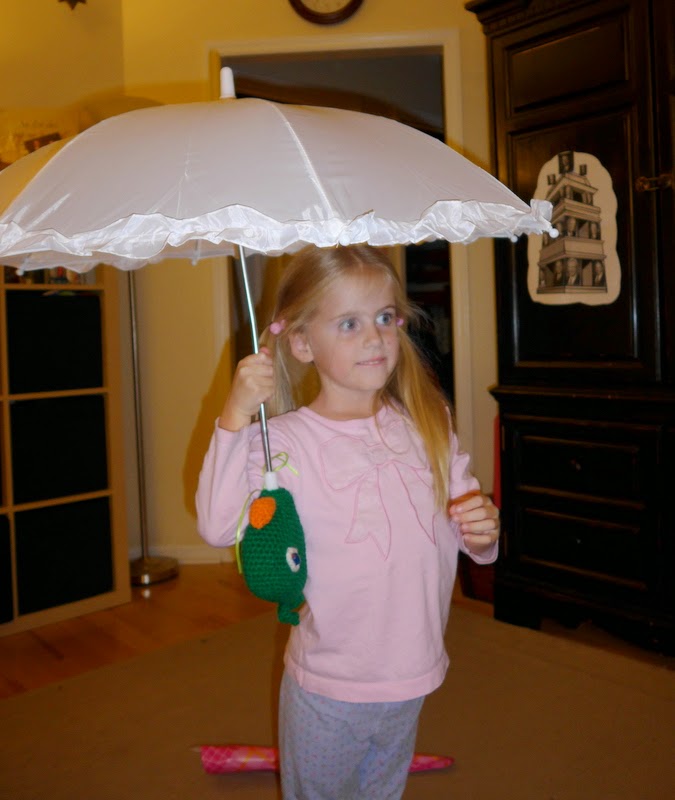 Somehow these last two will work into her Halloween costume, I think.

A baby book from Shutterfly (hurrah for free book coupons!)... 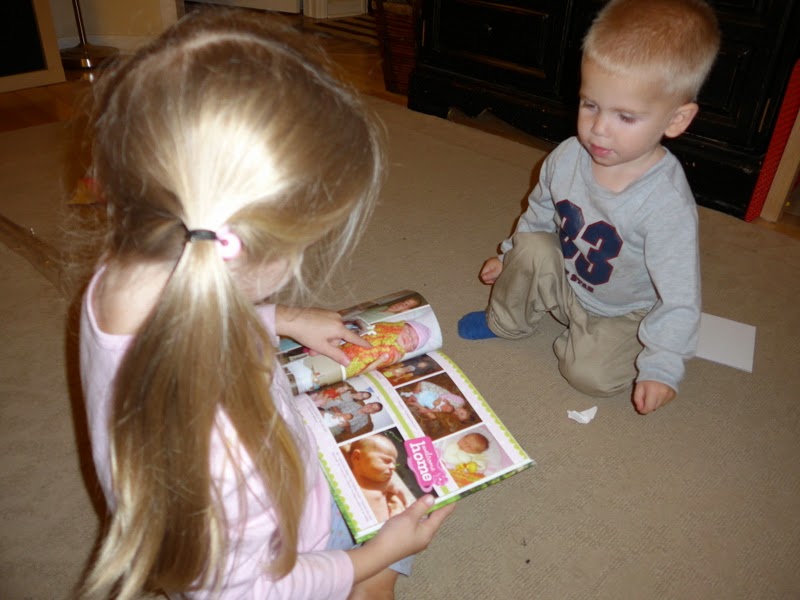 ...and some more clothes from the American Girl Doll store (including matching shirts for her and her doll). 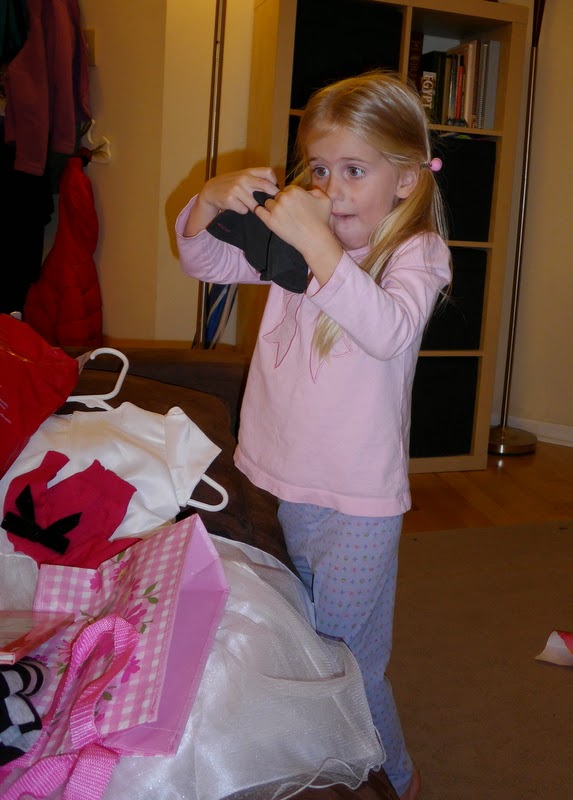 She also got a few more books and some small things. I had a hard time taking pictures of her because Benjamin kept dancing in front of the camera. 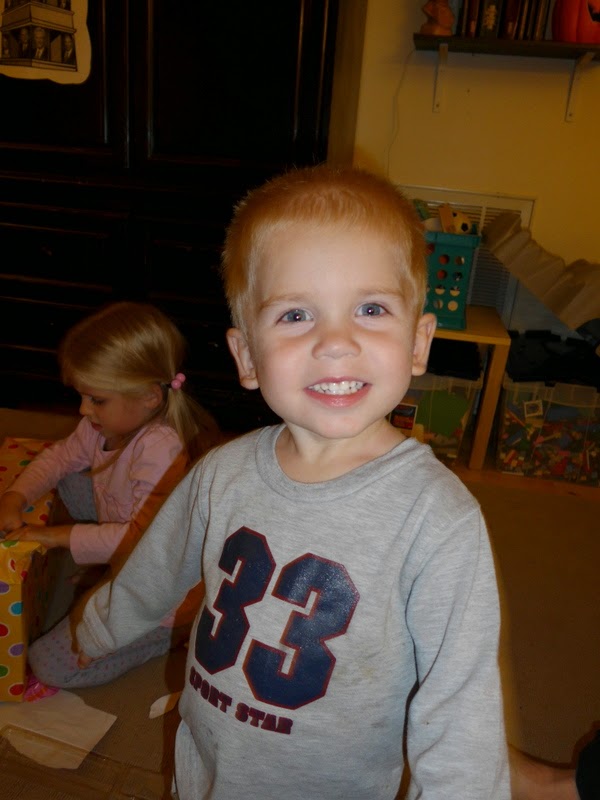 Finally it was time for cake! Miriam was anxious to get to this part because she's not really five until she blows out the candle (or so she believes). Here is the cake that Grandma made (with some help from Rachel): 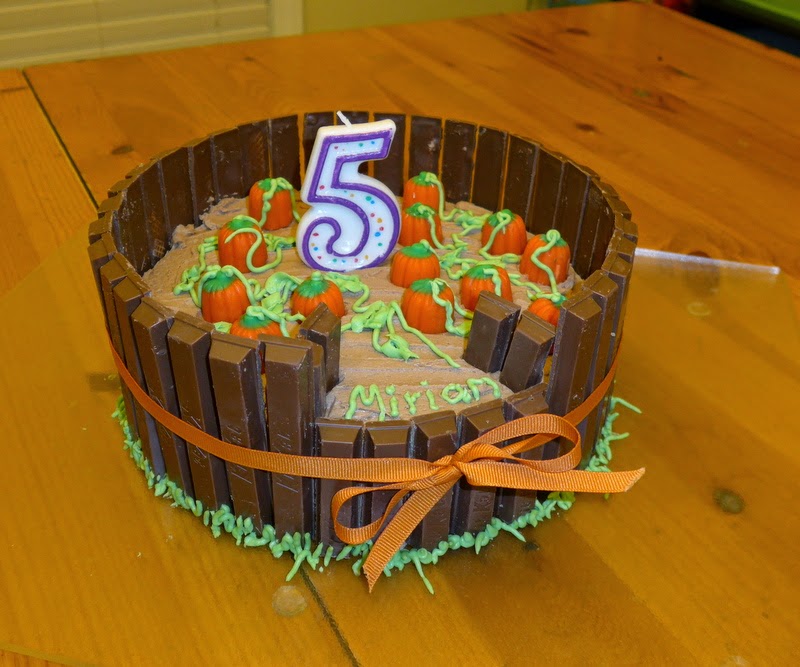 It's a pumpkin patch! 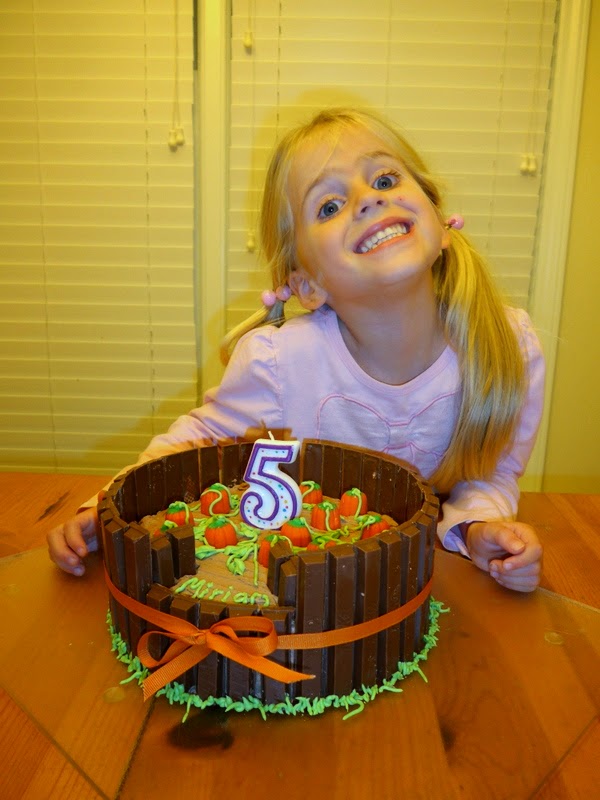 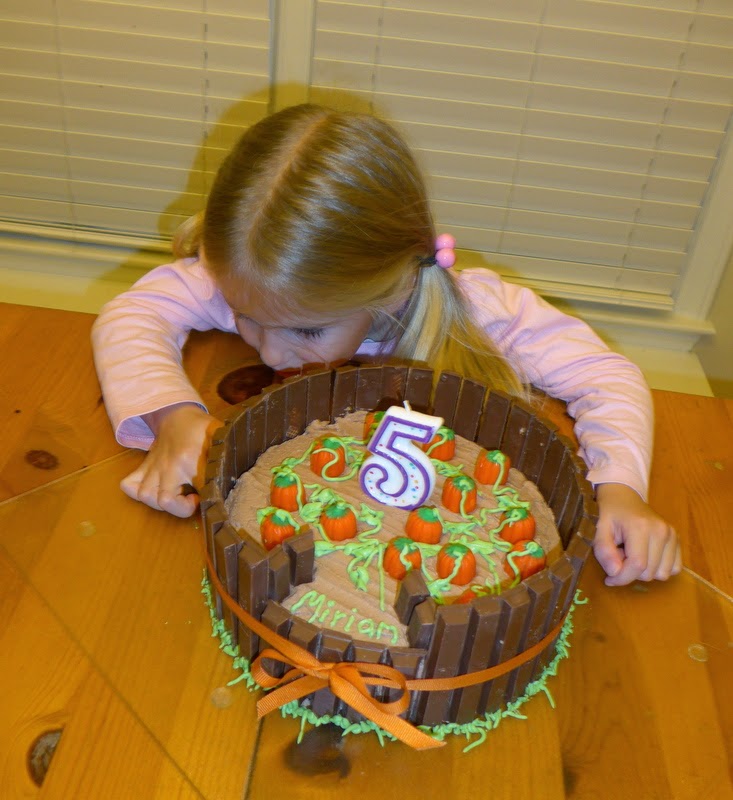 And here she is making a face when Grandma caught her in the act: 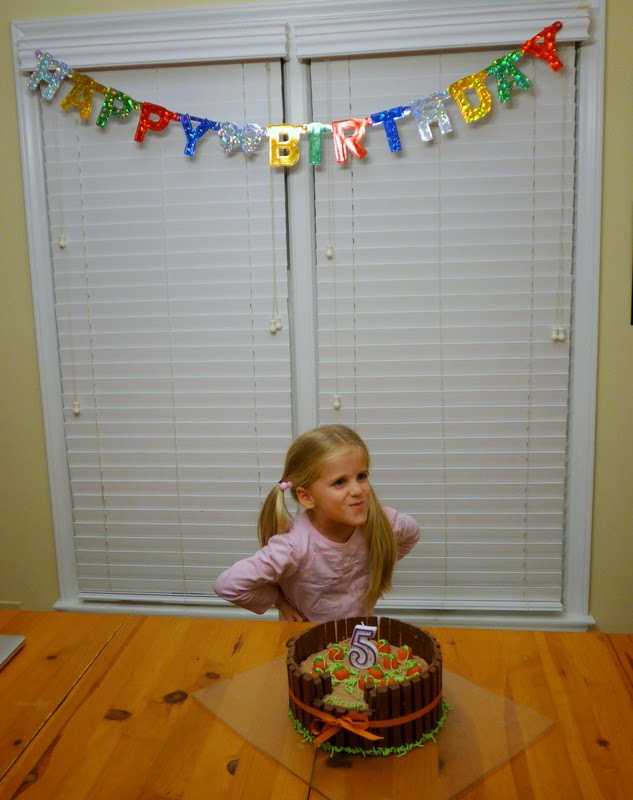 It took us a little while to gather everyone to the table but we eventually all gathered around to light the candle and sing 'Happy Birthday' to this sweet little five-year-old. 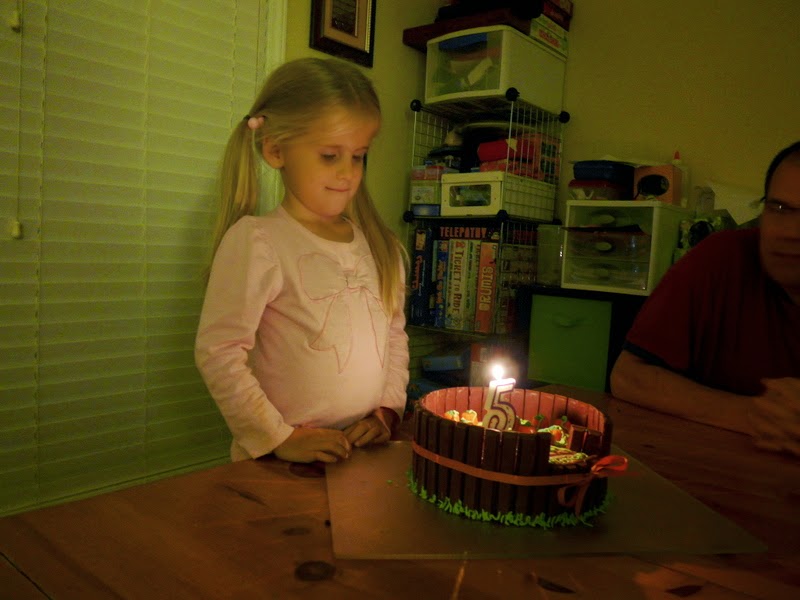 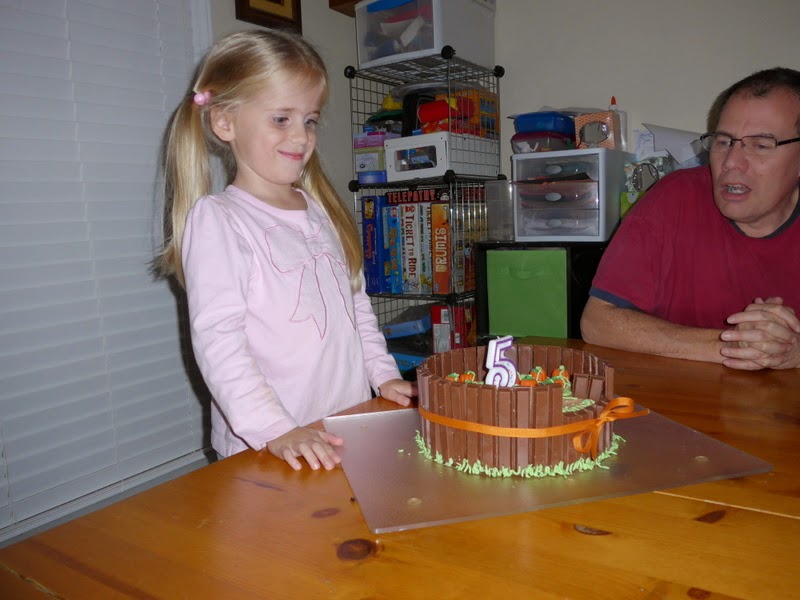 It was a nice, relaxing day (though Miriam is still looking forward to her friend party...that I still need to plan and carry out). I can't believe this sweet little girl is five already!
Posted by Nancy at 10:19 PM