I was much less ambitious today than I was yesterday. In the morning I suggested to the kids that we make some Christmas ornaments. "But before we do that..." I said.

"We have to get dressed, eat breakfast, clear the table, and tidy up!" the kids chanted.

And then (for the most part) they did all that stuff!

Benjamin did not but he's three so it's socially acceptable to make Christmas decorations in his underwear, right? 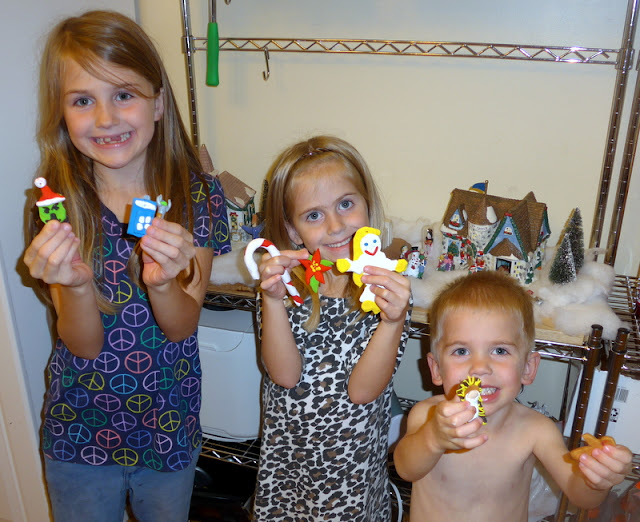 We used some leftover polymer clay from Rachel's birthday party to make our ornaments and the kids had a lot of fun. Rachel made a TARDIS, a sonic screwdriver, and a grinch. Miriam made a candy cane, an angel, and a poinsettia (aka "that red Christmas flower from Mexico"). I helped her with the poinsettia, though she did most of the work. I also helped Benjamin make Baby Jesus in a manger and a gingerbread man.

He mostly got to play with his play dough while the girls and I used the serious clay dough. It's hard to take people seriously when they're working in their underwear (sorry, little buddy) and his favourite thing to do with play dough is to smash all the colours together (for exhibit A, open any of our play dough containers and you will find that they are all the same colour because Benjamin has mixed them all into a pukey greeny-blackish-brown colour) and polymer clay is a little more expensive than play dough so I wasn't about to let him do that. He had a lot of guidance for this activity—but he was pretty good about rolling snakes when I told him to. He's been laughing all day about Baby Jesus laying in a bed of snakes.

"Those aren't actually snakes," I explained. "It's hay. We just rolled the clay into snakes to make the hay."

"Not snake hay; snakes of clay that we used for hay."

Considering he still can't listen to James 1:5–6 without adding "into a volcano!" after "driven by the wind and tossed," I think I'm going to have to let this one slide.

We went on a lovely afternoon walk and came across a vulture tearing the entrails of a squirrel out of its lifeless body. It didn't fly off until we were just a few feet away from it, so what we saw was quite graphic.

Rachel looked at Benjamin and said seriously, "Whatever you do, Benjamin, don't play dead."

Miriam huddled closer to me.

When it realized we weren't going to halt our approach the vulture flew up onto the roof of the closest house—its wings are pretty powerful.

The kids were rather disturbed by the vulture and it was a drizzly, grey day, so I did what any good mother would do three days before Christmas: I told them a spooky story (somewhat like this one).

Benjamin was riveted (and spent the afternoon retelling it).

"I am never leaving my bedroom window open ever again!" she said. "What if my screen falls out and a vulture flies right into my room?!"

We have a precedent for that (both with screens falling out of our windows and, more to the point, with birds flying into our house). On our anniversary (so about a week ago) the girls ran out to catch the bus, leaving the storm door hanging slightly open. I was nursing the baby (it's seriously all I ever do...still) and Andrew was throwing his things together and we kept hearing this "scritch, scritch, scritch."

"What is that sound?" Andrew finally said, heading over to the door.

He was quite surprised when a bird started wildly flapping all around him.

"I can see that!" I remarked. "How are we going to get it back outside?"

"I don't know!" he said, waving his arms and tripping over the shoes that had been left all over the entry way.

The bird had kept returning to the storm door and scratching around, so simply waited for it to step between the doors and then closed our house door and let the bird find its own way back out of the storm door (which it did).

"Phew!" Andrew said. "I feel all shaky from adrenaline AND IT WAS JUST A TINY BIRD! Why was I so scared?!"

Imagine if it had been a vulture!

We joke that it was a little love bird stopping by to wish us a happy anniversary (and to give us something to laugh about because Andrew really did overreact quite spectacularly).

Anyway, today was a good day, a less busy day, a day with few expectations.

It ended with our friend Diego stopping by to deliver treats to us (we delivered treats to him yesterday). All three kids flocked to the door (like vultures), danced around rejoicing about "Christmas goodies!" and took forever to calm down again.

Apparently receiving gifts is about as fun as giving them.
Posted by Nancy at 12:37 AM