On Saturday we went to our ward Christmas party, which was wonderful. My friend Rachel decorated for it and she did a spectacular job disguising the gym as a winter wonderland; I wish took a picture of the whole thing, but I didn't. I guess I was too wrapped up in containing the catastrophe known as taking four children out in public.

Zoë managed to have a blow out before the evening had really even started so I switched her into some pants I found in the diaper bag, which, as luck would have it, turned out to be just as festive: 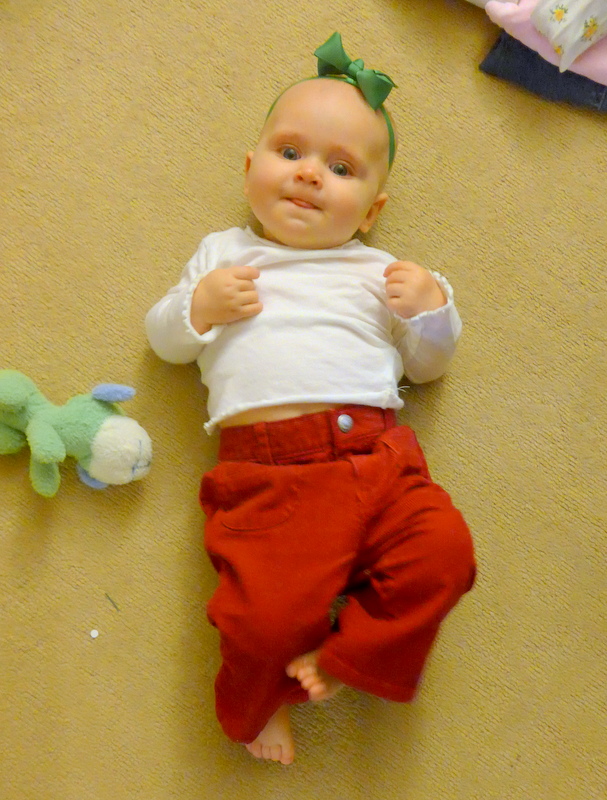 Andrew was impressed that I had an extra pair of pants for her. I usually have a sprinkling of spare wardrobe parts for Benjamin and Zoë in my diaper bag: socks, underwear, pants, shirts. I'm still occasionally caught off guard and if anyone else has a problem then they usually just have to suck it up. You know, like the time a couple of weeks ago that Zoë pooped through her diaper onto Rachel's white dress minutes before leaving for church. I put Zoë in a clean outfit but left Rachel on her own to examine her dress. She announced that Zoë had missed her altogether. When I looked over at her during sacrament meeting I saw a lovely stripe of mustard-yellow across her lap. So she wore that for the whole three-hour block of church. Nice.

Then there was this past Sunday when Zoë was sitting on my lap during sacrament meeting and she, yet again, overfilled her diaper, all over my lap. I was able to scrub the worst of it out in the mother's lounge, but my skirt was a little yellow-hued for the rest of the day.

I'm beginning to think the girl has a thing against dressing up.

Anyway, the party was lovely.

Our little ukulele choir volunteered to play at the Christmas party, as we usually do. It was fun to play. I'm not sure if people are getting sick of hearing us. We've played the past few years and I'm sure there's fresh talent elsewhere. It's good, though, to have a goal to be working towards and the kids seem to especially enjoy playing Christmas carols.

On Sunday afternoon we visited a couple of retirement homes to play for the residents, which was fun. The first place gave us ice cream and asked for an encore, which the kids thought was great. The second place was lovely, too. Next time we visit (which will hopefully be before Christmas next year; we're going to try to perform more frequently) I'm going to force the kids to visit afterwards. I'm sure they'll love that (psych).

Here's a smattering of what we performed:

It sounds pretty good if you ignore the little ones who insist on strumming that blasted C-chord the whole time. Some of them still seem to think that the song will sound alright without switching chords. We're working on that...
Posted by Nancy at 11:03 PM