Term one report cards were sent home this Monday (all three kids are doing just fine) and I was anxiously awaiting them when the kids got home because earlier in the day I had gotten the following email from Miriam's typing teacher (or "keyboarding" instructor): 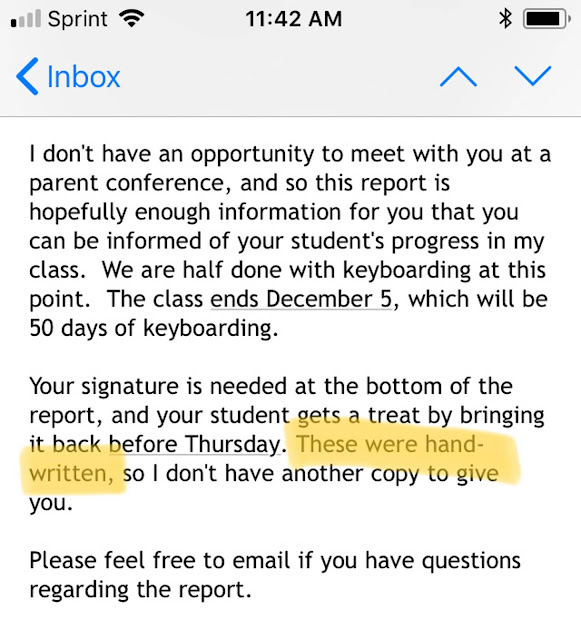 I read that and I just about died.

Miriam has a bit of a love/hate relationship with this class. Typing (or keyboarding, I guess) isn't exactly natural (but neither was holding a pencil at first) so she's frustrated that it isn't just coming to her. She surprised us one day by coming home and seething, "I hate keyboarding!"

I mean, what about piano and organ?!

Only later in the conversation did I understand that she meant typing.

And now I'm all confused about what to call it because keyboarding sounds so silly to my ears. I want to call it typing. I understand that typing was originally used in relation to a typewriter, not a keyboard, but making that distinction seems trivial. After all, it's the same old QWERTY keyboard.

The Online Etymology Dictionary explains that the noun keyboard comes "from key (n.1) in sense of "mechanism of a musical instrument" + board (n.1). Originally of pianos, organs, etc., extended to other machines 1846. The verb is first recorded 1926 (implied in keyboarding)."

So, keyboards first referred to instruments with keys (such as pianos and organs) and was later used in reference to machines (such as the typewriter).

The verb typing is several decades older than the verb keyboarding and according to a quick search on google, yields 31.8 times as many results (183,000,000 for typing and only 5,740,000 for keyboarding), which I can only assume it's the more commonly used word.


I'm not saying I'm right (though I will admit that "typing" sounds right to my ears). I'm just saying that choosing to use the verb "keyboarding" rather than "typing" is interesting to me (interesting enough for me to be mildly interested about which word will eventually win out over the other but not interesting enough to lose sleep over (except that I sort of am losing sleep over this because I should be going to bed now)).

All that said, Miriam is always up for a challenge and over the fall break she asked her teacher for extra typing practice sheets so that she could work on her typing at home. Like any skill, practice makes for improvement. So I suppose she doesn't hate it enough to avoid it. She wants to learn it; she simply finds it frustrating to learn.

Here's her report card which, sure enough, is handwritten: 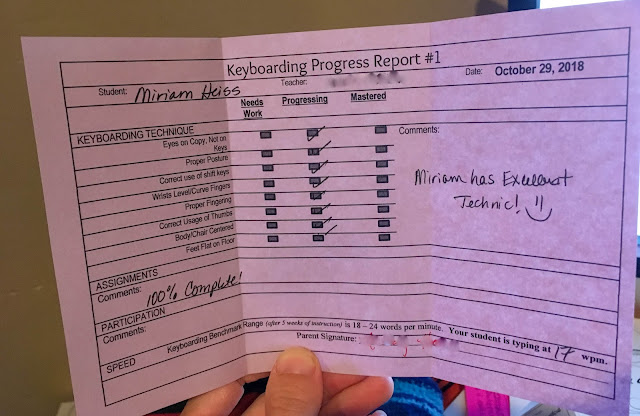 I find that hilarious given the other progress reports we got were typed and this is from her typing teacher! We won't even get into the word technic.

Miriam's always coming over to me, as I'm typing at my desk with my knees curled up under my chin (as one does), to tell me that I should be typing with my feet flat on the floor. But I can type at just-fine speeds this way. So...whatever. We told Miriam to type the way her instructor tells her to and when she gets older she can type however she'd like. She can even handwrite her report cards for her students if she wants to.

Speaking of keyboarding, I need to have Andrew send me pictures of Miriam's organ adventure on Saturday. It was there that Andrew realized why organ keyboards are called manuals. See, you play the pedals with your feet (latin root: pedale (thing of the foot)) and you play the manuals with your hands (latin root: manualis (of the hand)), which should have been terribly obvious to anyone who speaks a romance language (but evidently it was not apparent enough because I only figured it out after Andrew told me).
Posted by Nancy at 1:20 AM