Wednesday was a rather busy day and with orchestra in the morning I didn't have time to snap a picture of Rachel before school. I also didn't get around to snapping a picture of Zoë before her preschool Halloween party because she was in such a sour mood that we were running late by the time I'd convinced her to put on her costume and head out the door.

But I did manage to take pictures of the other three!

Here's Benjamin dressed up as Neville Longbottom—notice the earmuffs and the mandrake: 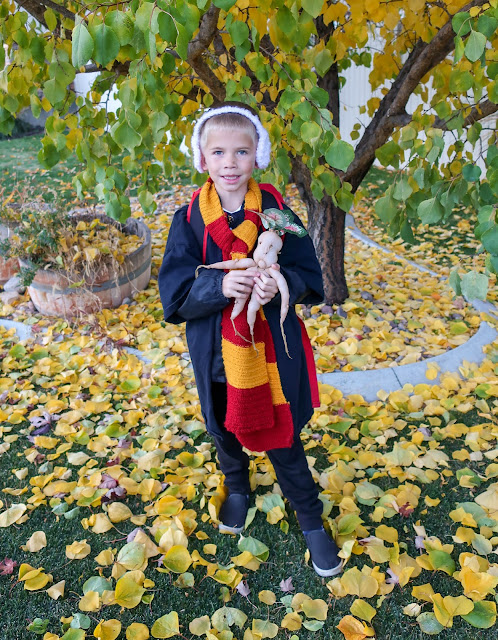 Here's Miriam as Little Red Riding Hood—she used her basket as her backpack so her lunchbox is tucked inside: 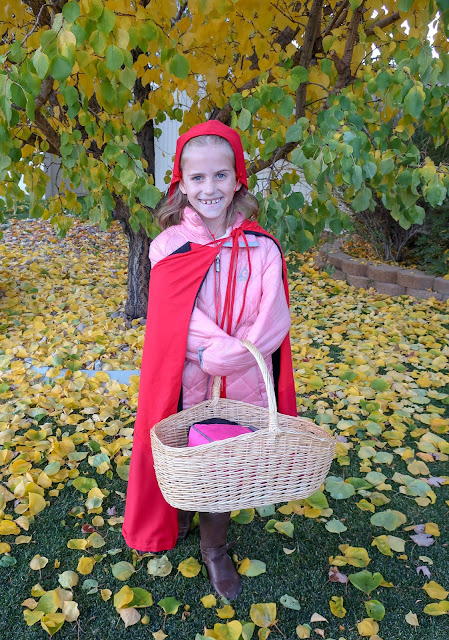 And here's my sweet little elephant, Alexander, trying to play in the leaves: 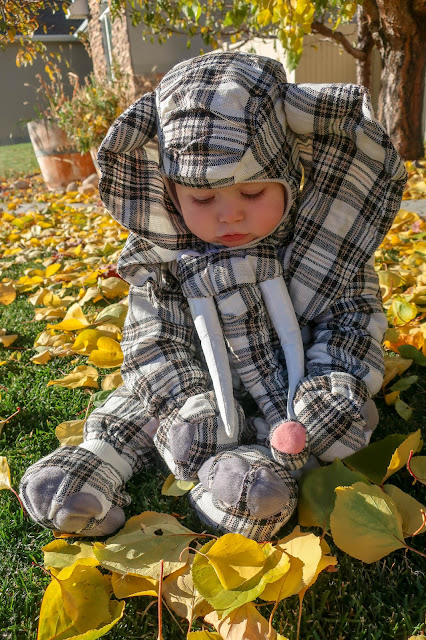 And here he is yelling about the little mittens because they're making playing in the leaves difficult: 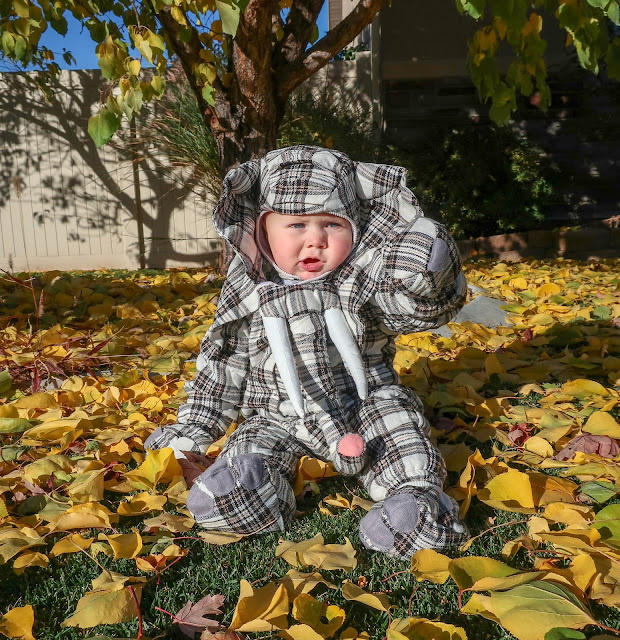 I had to run class parties for both Rachel and Miriam (which I'll write about more later, maybe), so it was a crazy afternoon for me! Karen offered to keep both Zoë and Alexander during the parties, but I'd already decided to take them with me because Grandma had been so sick. But I also knew that trying to run both parties with Alexander clinging to my legs was going to be very difficult, so when she pressed me about it a little further, I caved. I told her I would leave Alexander behind with her but that I was going to take Zoë with me (one child is easier than two).

And now I feel guilty about doing even that because was that the straw that broke her back?

What's done is done, I guess. And Grandma and Alexander really get along quite well together. I know she loves to spend time with him (though he probably loves spending time with her more) so I shouldn't feel too guilty. But still, I do.

After school was a flurry of activity. Rachel helped the little ones carve a couple of pumpkins (but, as it turns out, they didn't ever finish the task) while I got a healthy dinner going. But then Rachel's friends invited her to go out trick-or-treating with them, so she wolfed down a piece of bread before dashing off to Tayah's house. I thought her little crust of bread was fitting for the evening since she had dressed up as Éponine (using things she found around the house; we just had to make the little red/white/blue ribbon for her hat): 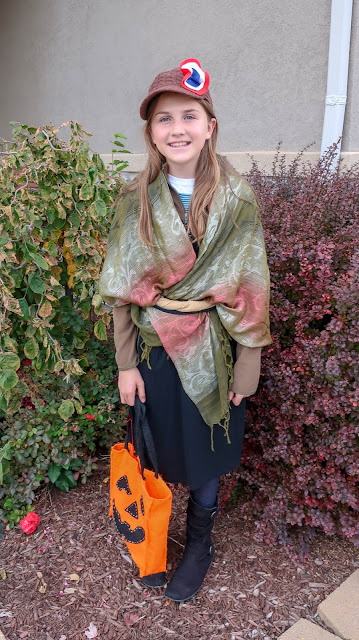 Shortly before Halloween I asked the Facebook world how families manage to do family-wide theme costumes year after year. I can't even imagine coordinating such an effort (I'm sure my children wouldn't stand for it). But other people manage to do it—and their kids seem happy about it.

I'm not really ever planning on doing this because I'm perfectly happy with our Halloween Misfits, but there was some good advice offered (like deciding well in advance and sending your kids subliminal messages throughout the year so by the time Halloween rolls around they're well-prepared to accept your idea; and dressing up as a family for a church activity but letting the kids be whatever they'd like for school/trick-or-treating (which sounds like twice as much work to me)).

The question I should have asked was how anyone manages to find the time to eat dinner, get the kids in their costumes and take a picture of all of the kids together because we haven't managed that in a couple of years now and it just seems impossible to me. So individual pictures will have to suffice. 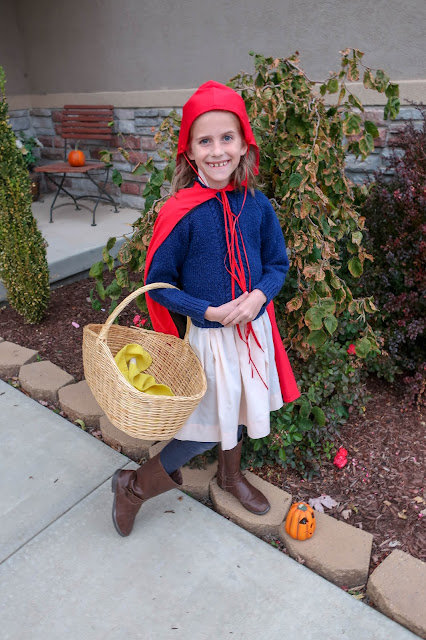 My mom made the cape and hood for Rachel a few years ago, but I don't think Rachel ever used them (at least not for Halloween). Little Red Riding Hood was a surprisingly popular costume this year.

Here's Benjamin putting our Hogwarts robe to good use, this time as Neville Longbottom: 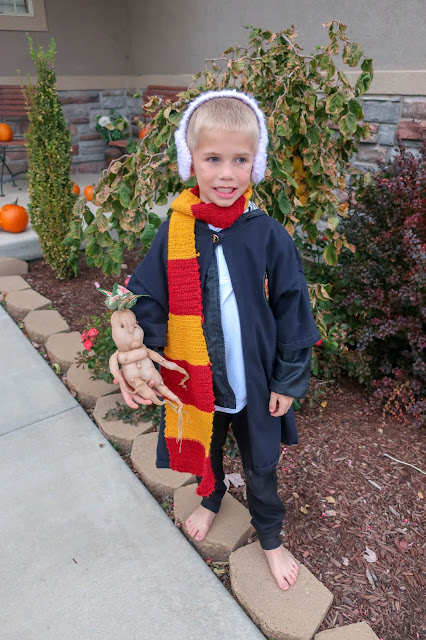 I did buy him a white polo shirt to wear for this costume, but I figured we'd get more use out of that in the future. I fashioned some earmuffs out of fluffy pink yarn (as a tribute to the pink muffs featured in the book but also because Benjamin loves pink) and made the mandrake out of old nylons (and leaves from a fake plant). I made the robe for Rachel on her fifth birthday and the scarf was a gift from then-soon-to-be-but-we-didn't-know-it-yet Aunt Shayla. 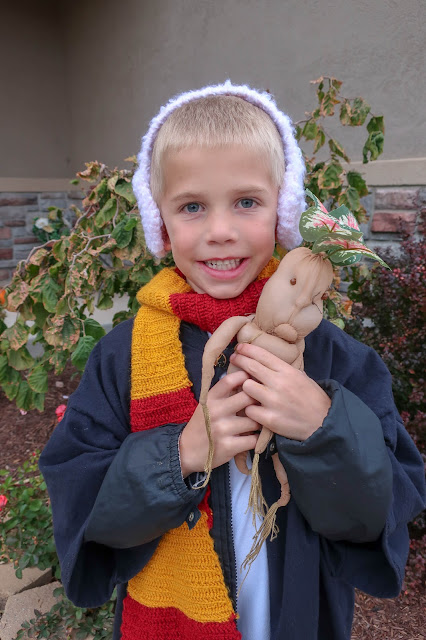 Zoë, the uncooperative little miss, dressed up as Angelina Ballerina, more or less recycling Miriam's costume from 2012. She chose a different tutu and wouldn't let me put much makeup on her (she actually didn't realize I'd even gotten the whiskers on her face and calmed down a lot when I showed her evidence that I'd wiped off the nose I'd drawn on her (she hates facepaint)): 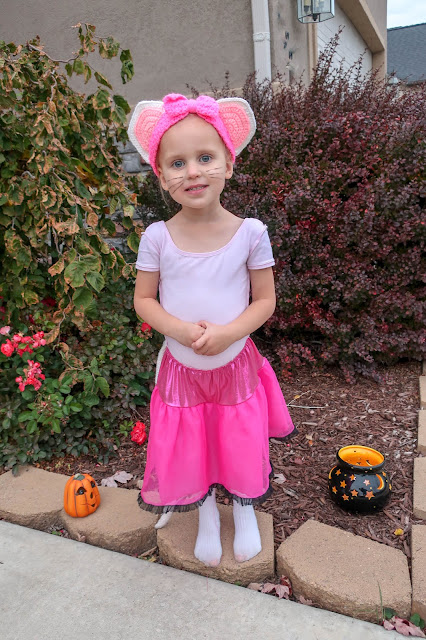 We have a picture of her running around in that costume somewhere, but on Halloween Day she settled on Angelina Ballerina. She had no little mouse face drawn on her Zoë face, I had to battle her to put two pairs of tights on (it was cold), and she wore her leotard inside-out, but she was Angelina. 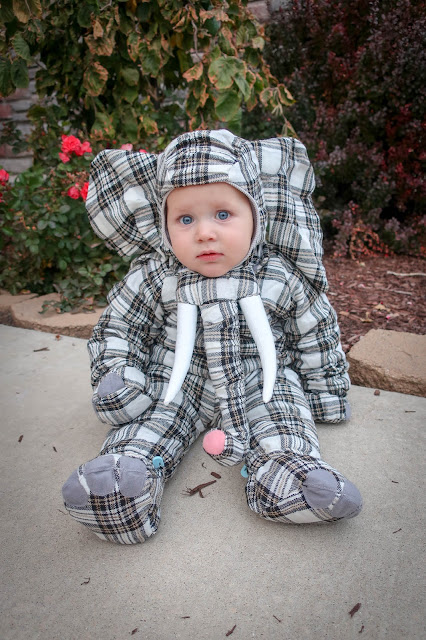 Grandma picked up this costume on clearance while she was out shopping. It was just so adorable that she couldn't resist, and Alexander is adorable in it! He could hardly move because I had him in two pairs of footie-jammies underneath this fluffy elephant onesie (like I said, it was cold).

He was going to be a penguin, though I hadn't even tried our little penguin costume on him, so who knows if it even fits him? I'll have to remember to dress him in it for a picture before I put all the Halloween stuff away (because he'll be the third child to wear it). I'll probably forget...

Here's four of our five ready to head out trick-or-treating: 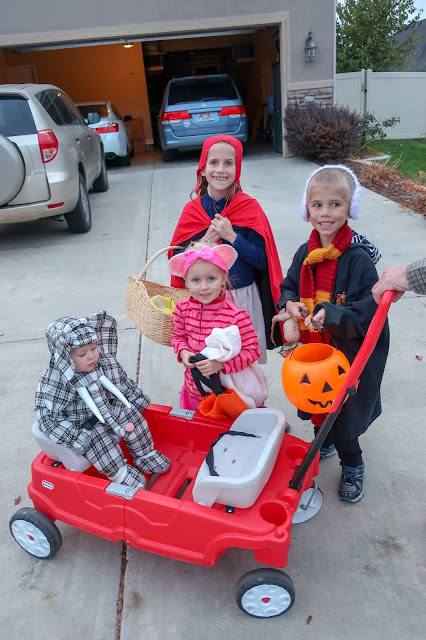 And here I am ready to take them trick-or-treating (I'm dressed as a nondescript Hogwarts teacher (Ravenclaw, obviously)): 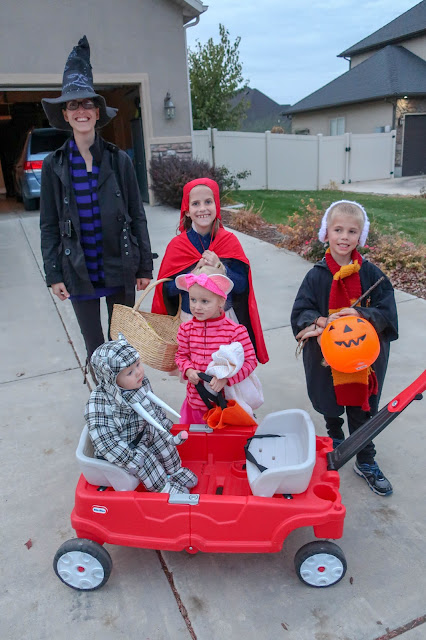 Alexander tolerated his long ride in the wagon quite well.

Zoë tripped at the second house (and probably about two dozen other houses). She asked to go home after about five minutes. She hopped in and out of the wagon a thousand times. She cried about her Angelina ears a billion times. But she was also quite entranced by the magic of the evening—of dinosaurs roaming the street, of cackling witches handing her candy, of glowing phantoms and cheery jack-o-lanterns.

Benjamin slowly lost all his accessories. He tired of carrying the wand and put it in the wagon. He somehow managed to lose the mandrake even though we'd fastened it to his wrist. Eventually he pulled off his earmuffs, venting, "No one even understand who I am!" because they all figured he was Harry Potter.

He also took one of those classic Halloween spills where his candy bucket went sailing through the air and then went skittering down the sidewalk, raining candy all around. He was so sad about his knee but was absolutely distraught about his candy. Fortunately, his fall happened very close to the end of our route so we were almost home.

Miriam was a very pleasant trick-or-treating companion. She'd hoped to go out with friends but was also happy to hang out with me (and I was glad for her company). She helped Zoë get up to doorways while I stayed back with the wagon. Her heart wasn't really into trick-or-treating this year because with her palate-expander in place (and with braces forthcoming) there wasn't a whole lot being handed out that she could eat. So she always grabbed play-dough (or other gadgets) and chocolate when she could.

Rachel was off having her own little adventures, which hopefully she'll write about on her own.

It was quite an exhausting evening. And then when I looked out the window on the morning of Novemeber 1st, what do you think I saw?

Two half-carved pumpkins sitting in the cold, drizzly rain! I guess they needed a little more help than I'd realized (though in their defense, I think they managed to get two pumpkins fully carved). 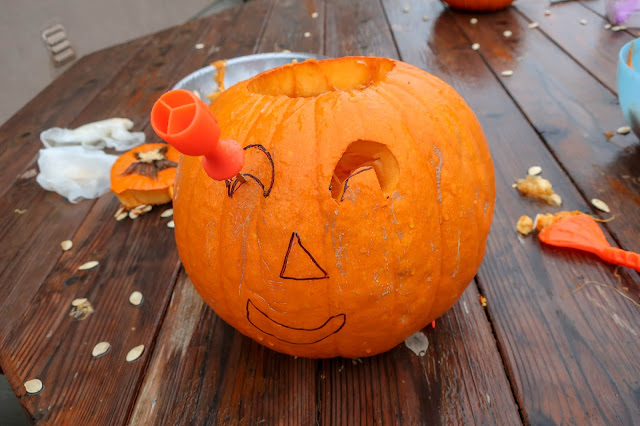 Andrew and I told each other that this year we were going to for sure make pumpkin puree out of our jack-o-lanterns (we didn't last year because of Alexander and chaos), but I think these half-carved pumpkins serve as a perfect illustration of how our November has gone so far.

We're all feeling a little half-carved—like we've been torn open and had our innards ripped out* and maybe even have a knife sticking in our eye—so I don't expect we'll get around to making pumpkin puree this year. It was a noble(-ish) effort. 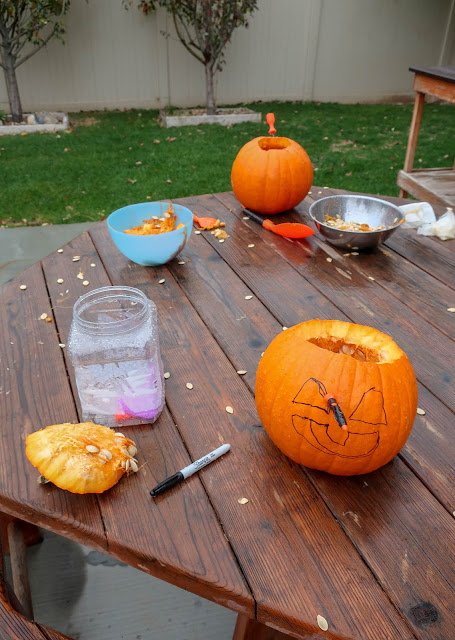 * Grandma probably feels like this the most. She had an operation to put in a...line...for dialysis since her kidneys aren't functioning right now. She's had two rounds of dialysis so far and it seems to be helping. Tonight Andrew and Rachel ran dinner down to Grandpa and got to visit with Grandma for a few minutes and she was (a) awake (which is huge) and (b) making complete sentences (also huge).
Posted by Nancy at 2:16 AM