Life right now is rather painfully marked by before and after. It hasn't quite been a week.

We went through the leftovers in the fridge—was this meal from before or after she died?

The shower door was scheduled to be installed today—by her, before she died.

I recently found a random handout from when Grandma and Grandpa were substitutes for Benjamin's primary class just a few weeks ago. Somehow it's strange to me that his paper (listing one of his talents as "I draw pictures for Grandma!") is still kicking around the house but Grandma is not.

Rachel wrote and submitted a story to the school's art festival before Grandma died as well.

My girls have been enjoying WWII era historical fiction and for Miriam's birthday Grandma gave her a whole stack of books that Rachel had helped her pick out, including several about WWII. Grandma, who was always a little bit about the pomp and circumstance—the presentation—handed them to Miriam, unwrapped.

Perhaps that should have been a clue of how horribly she was feeling. Not wrapping presents, I mean.

I keep looking back for clues, for something—anything—that we could have picked up on or done differently. I should probably stop, but it's where my mind keeps drifting so it must be part of the grieving process.

Anyway, Rachel submitted this story to the school's art festival (before Grandma died) and on Tuesday (after Grandma died), we went to the award evening at the school where we found Rachel had been awarded first place in the literature category for grades five and six. 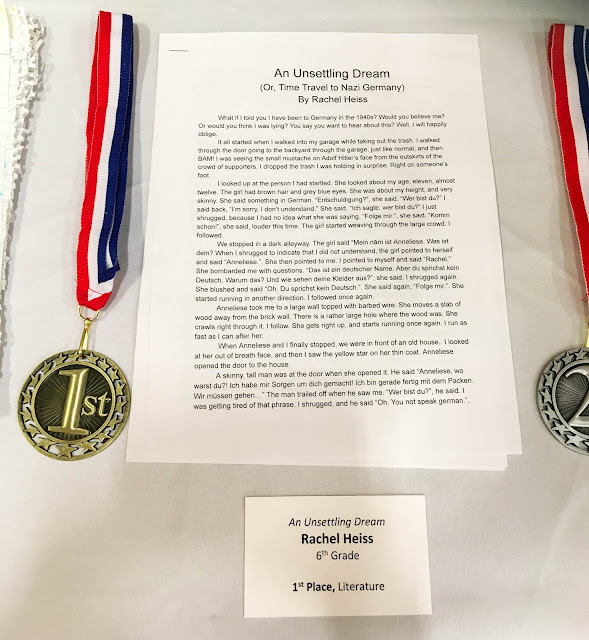 On her submission form she wrote that she wrote this piece "because I think people need to learn about the horrors of World War II. Though this piece does not capture the feeling of the war as exquisitely as some other pieces of literature, people still need to hear about this so we never repeat those mistakes." I thought that was a lovely reason to write something.

Here is Rachel with her friend Tayah, who got 2nd place in literature and 1st place in photography.

And here is a copy of Rachel's story, written and edited all by Rachel (with a little bit of help from Google Translate):


An Unsettling Dream
(Or, Time Travel to Nazi Germany)
By Rachel Heiss

What if I told you I have been to Germany in the 1940s? Would you believe me? Or would you think I was lying? You say you want to hear about this? Well, I will happily oblige.

It all started when I walked into my garage while taking out the trash. I walked through the door going to the backyard through the garage, just like normal, and then BAM! I was seeing the small mustache on Adolf Hitler’s face from the outskirts of the crowd of supporters. I dropped the trash I was holding in surprise. Right on someone’s foot.

I looked up at the person I had startled. She looked about my age, eleven, almost twelve. The girl had brown hair and grey blue eyes. She was about my height, and very skinny. She said something in German. “Entschuldigung?”, she said. “Wer bist du?” I said back, “I’m sorry, I don’t understand.” She said, “Ich sagte, wer bist du?” I just shrugged, because I had no idea what she was saying. “Folge mir.”, she said. “Komm schon!”, she said, louder this time. The girl started weaving through the large crowd. I followed.

We stopped in a dark alleyway. The girl said “Mein nām ist Anneliese. Was ist dein? When I shrugged to indicate that I did not understand, the girl pointed to herself and said “Anneliese.”. She then pointed to me. I pointed to myself and said “Rachel.” She bombarded me with questions. “Das ist ein deutscher Name. Aber du sprichst kein Deutsch. Warum das? Und wie sehen deine Kleider aus?”, she said. I shrugged again. She blushed and said “Oh. Du sprichst kein Deutsch.”. She said again, “Folge mir.”. She started running in another direction. I followed once again.

Anneliese took me to a large wall topped with barbed wire. She moves a slab of wood away from the brick wall. There is a rather large hole where the wood was. She crawls right through it. I follow. She gets right up, and starts running once again. I run as fast as I can after her.

When Anneliese and I finally stopped, we were in front of an old house.. I looked at her out of breath face, and then I saw the yellow star on her thin coat. Anneliese opened the door to the house.

A skinny, tall man was at the door when she opened it. He said “Anneliese, wo warst du?! Ich habe mir Sorgen um dich gemacht! Ich bin gerade fertig mit dem Packen. Wir müssen gehen…” The man trailed off when he saw me. “Wer bist du?”, he said. I was getting tired of that phrase. I shrugged, and he said “Oh. You not speak german.”, in broken english. “ No, I don’t.”, I said. “ I learn some english, but not much.”, he said. “You America?”. I understood that, and I said “Yes.”. “It good there?”, he asks. I pause to think, and I hear laughing and crying from the other two floors. I say, “Yes, I suppose.”. He nods. “What your name?”, he asks. “Rachel”, I say. “I am Anneliese father.”, he says. “How old you?”, he asks. “Eleven.”, I say. “Almost twelve.”. “Genau wie du, Anneliese.”, he says to Anneliese. “Elf, fast zwölf.”, her father says in a teasing tone. I notice he too has a yellow star on his grungy, thin shirt.

“You stay dinner?”, he asks. “Sure”, I say. He calls up the stairs. “Zeit für's Abendessen!” People come down. “Was gibt es zum Mittagessen?”, a small boy asks. "Kartoffeln.", Anneliese’s father says. "Nicht schon wieder! Ich hasse Kartoffeln!", the boy says. "Du weißt, wir haben nichts außer Kartoffeln, William, beschwere dich nicht.", says a girl, a little older than me. The boy sticks his tongue out at her. "Du bist so ein Baby, William, werd erwachsen!", the girl says. An older woman, perhaps her mother says, "Sei nett zu deinem Bruder, Hannah!" The older woman sees me and says, "Oh! Hallo. Lass uns dich sauber machen.". When I shrug, she says to Anneliese’s father, "Kannst du übersetzen?" He nods, and says to me, “ She get you washed up.”. She beckons up the stairs. I follow her into a tiny room. She lays out a patched button up dress on the small bed. This also has a yellow star on it. I put it on. She puts my hair in two braids down my back, and points a bucket full of water on the floor of her small bedroom. She pantomimes washing her face. I do as she says.

Anneliese’s parents tell me to stay with them for the night. When we all finish our food, we get sent straight to bed. I go downstairs with Anneliese, Felix, Frederick, Thomas, Frank, Klaus, and Emilia. Anneliese’s mother, Isabelle comes down with us. She puts the toddler to bed, on the floor, then goes back upstairs. Anneliese’s brother, Thomas, goes with her.

There is a candle flickering in the darkness. Anneliese goes over to it immediately. She picks up a slate and piece of chalk lying next to it. She writes as fast as she can on it, then hands it to me. “I can not speak English but I can write some.”, she writes, with a few mistakes. “ What is going on up there?”, I write, and hand the board to Anneliese. She writes back, “ I do not know. Probably fighting again.”. (I am cutting her mistakes out of this.) “Oh.”, I whisper. “About what? “, I write, and hand the board to her. “When to leave.”, Anneliese writes. “Gute nacht.’, she says, right as the candle goes out. “Good night.”, I say, as we crawl to an empty spot on the floor.

When I awake, Anneliese is shaking me. “Verbergen! Komm schnell! Die Nazis sind hier! Lauf! Schnell!”, she yells. I hear the one word I need to hear. Nazis. Anneliese practically drags me to the stairs. She runs back, picks up Klaus, and catches up with me. Still groggy from sleep, we run all the way to the attic. When we get there, panting and scared out of our minds, we see only William, Frank, and Emilia. Only six people, counting Anneliese, Klaus, and I. Where were the others?

We are all huddled together in a corner of the cold attic.. William and Emilia are both crying softly, and Klaus is still asleep. Anneliese is holding Klaus. William is sitting on my lap. Emilia is sitting between Anneliese and I. Frank is dozing off on Emilia’s lap. How is it that these people had come to trust me so quickly? And the funny thing is, I trust them too.

We are all nodding off, when suddenly we hear the door on the main floor open. We hear a harsh voice say “Komm mit uns! Alles von Dir! Eile!” We are all awake at this point. Anneliese is trembling. The small children are crying. We hear a different, harsher voice say “Schnapp dir deine Besitztümer! Wir bringen dich in ein Arbeitslager!” I hear Isabelle’s voice say “Nein, hör auf, ich habe Geld! Bitte, das ist alles was ich habe!” Anneliese starts crying. “Bitte, erbarme dich unser! Bitte nimm meine Kinder nicht! Sie sind nur vierzehn und siebzehn!”, I hear her father yell. We hear more screaming and bumps, and then some sort of gunshot, then all fell silent. We hear the door close again. We are all crying now. A few minutes later, we hear smashes, crashes, and all sorts of terrifying noises, and then… silence. We wait. After a few hours, we go downstairs for food.

When we get to the main floor, we find a horrifying sight. Everything is smashed, broken, or cracked, in one spot or another. Anneliese lets out a little squeak. William, Frank, Emilia, Klaus, Anneliese, and I walk out the front door, quite recklessly, I might add. All the houses in the ghetto look like Anneliese’s. Some are even burned to the ground. All the houses are empty. Emilia gasps. Klaus starts to cry. Frank sits down, in shock. William asks “Wo ist Mutter?” Anneliese responds "Ich weiß es nicht, William, ich weiß es nicht." She picks up Klaus, who is now crying harder, and starts singing. "Guten Abend, gute Nacht, mit Rosen bedeckt, mit Nelken geschmückt, schlüpfe unter deine Decke: Früh am Morgen, wenn es Gottes Wille ist, wirst du wieder aufwachen. Guten Abend, gute Nacht, von kleinen Engeln beobachtet. " I do not know the words, but it calms all the small children, so it must be a lullabye of some sort. It seems to calm Anneliese as well, and we keep moving. We walk into a house, and it seems that the people in there had been taken without a struggle. Anneliese writes with a piece of charcoal onto the floor, “They took them. They took all of them. The Nazis. They took them all. What will we tell the children?”. When I read the word ‘we’, I smile a bit, almost forgetting what was happening. I write back, “We don’t. At least not yet.”

We walk down to the basement of the house, looking for food. On one of the the steps, I trip. I keep falling, longer than I should. When I finally land, it is on my bed, flat on my back. I sit up, and look out my window. It is dark outside. I check the clock. 4:30 AM. Was this all a dream, the ghetto, the Nazis, Anneliese? Or did I really travel in time? I’ll never know.
Posted by Nancy at 11:51 PM