Alexander, still not walking, has at least finally started talking. He mostly communicates by grunting and pointing. He will occasionally say "momma" (or variations on that theme). But other than that—nothing.

When he had his check up not too long ago, the doctor asked what words, if any, he was using consistently (other than "mama" and "dada," which should be a given (but which really aren't for Alexander)). I was like, "Yeah, none, so..."

But on Sunday when we were leaving to go to church, with half our brood because half of us were too sick to go, Alexander both waved goodbye and said bye-bye.

I wouldn't define it as "clear as a bell." Rather it was a garbled, "Bluh-bluh," but we'll take it!

And then this morning he was playing on a toy cell phone and he put it up to his ear and said, "Eh-o?" which I can only assume was his attempt at, "Hello?"


So we've got some movement in that department (and I'm both excited for it because kids say the darndest things, but am also so, so sad to leave our wordless days to history).

Here's an unrelated picture (or two) of Alexander "helping" get the scriptures down (from the third shelf): 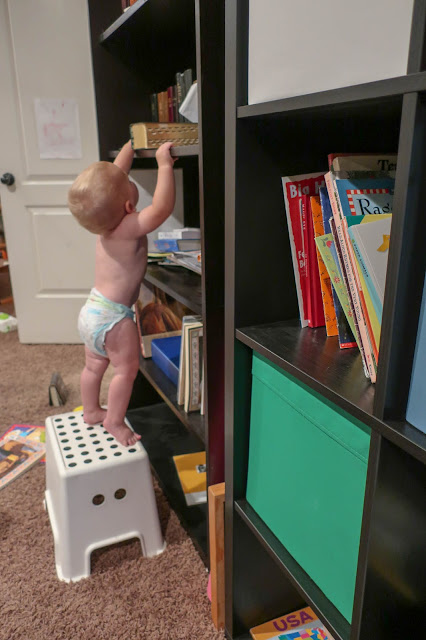 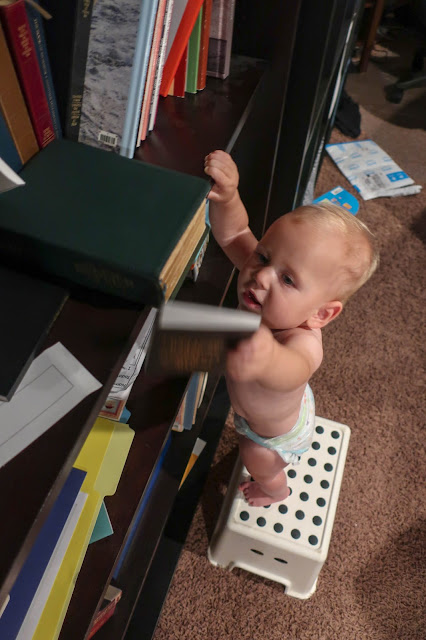