Aunt Stacey came to our house on Wednesday to make stuffing and prep the turkey. Here she is letting Benjamin help her mix the egg into the bread (Aunt Stacey is a terrific chef and enjoys having little sous chefs around to help; she was giving Benjamin all sorts of jobs): 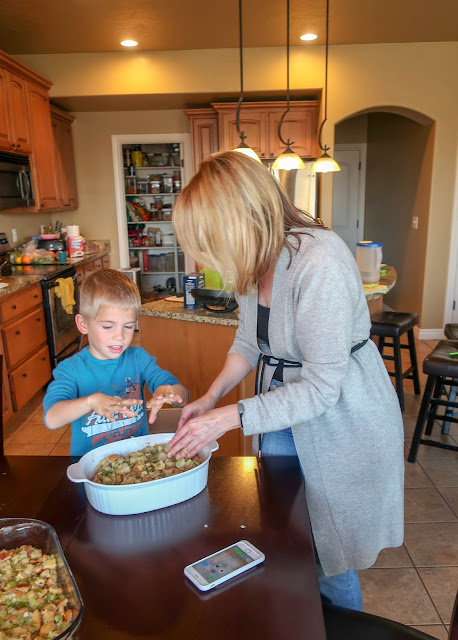 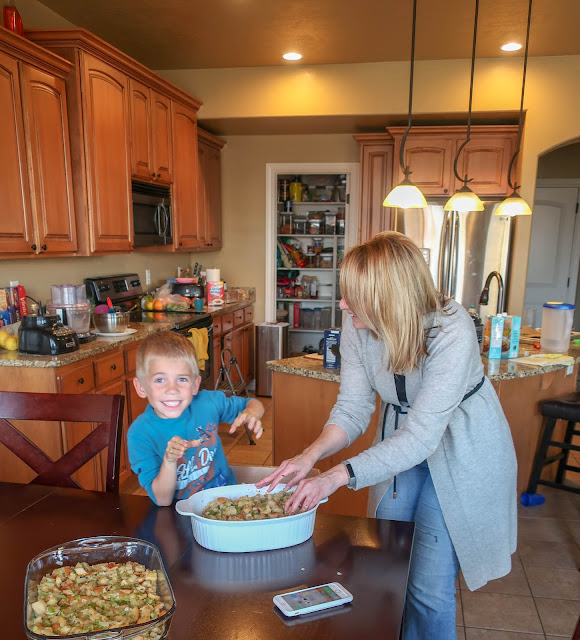 Andrew stayed up until 2 AM making pies.

I stayed up until 2 AM cleaning up after him.

When we finally collapsed into bed I said, "Baking your grief away?"

"I think so," he admitted solemnly. 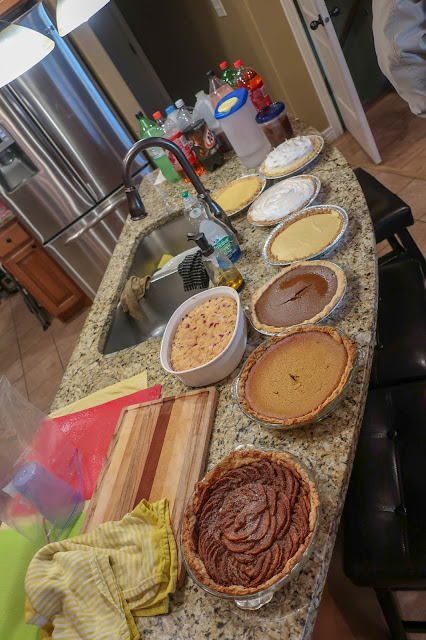 He made six pies last night (apple pie (the way his mom likes it), pumpkin cheesecake pie, a more traditional pumpkin pie, Carolina Beach pie, lemon meringue pie, and banana cream pie), as well as a cranberry cake. In the morning he broke out the recipe for Yucky Pumpkin Pie and had Rachel and Miriam make a couple of those. So we basically had pie coming out of our ears.

He also made mashed potatoes and sweet potatoes. Miriam made the cranberry sauce. Oh, and Aunt Stacey roasted some asparagus.

It was quite the feast. 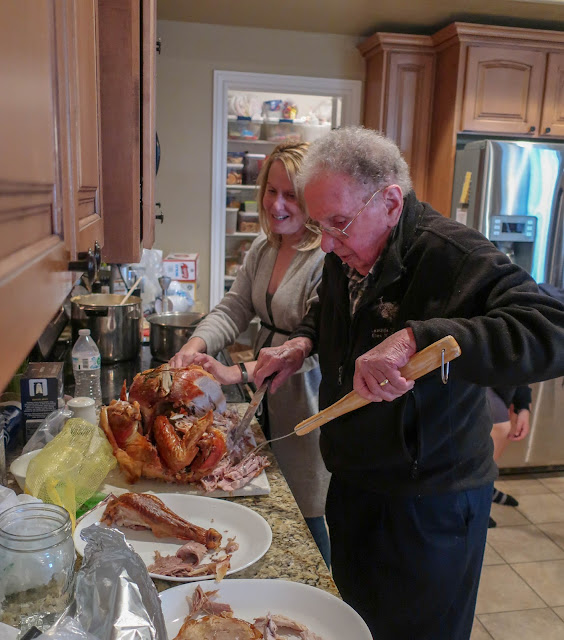 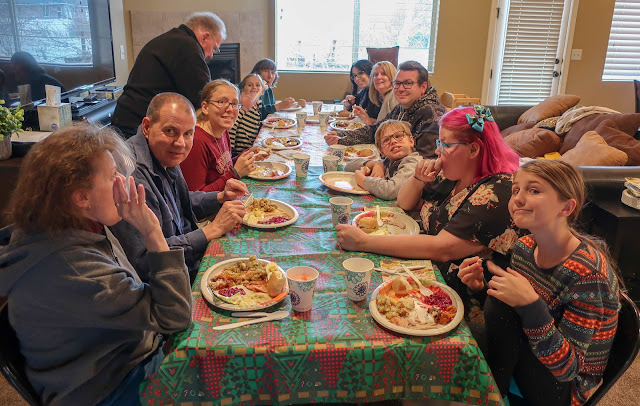 And one from the other direction: 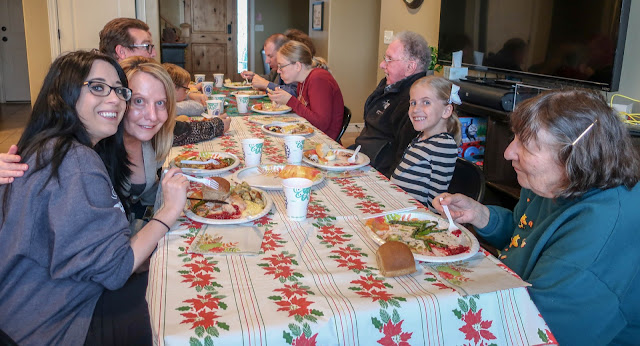 Emma was thrilled that Alexander finally let her hold him: 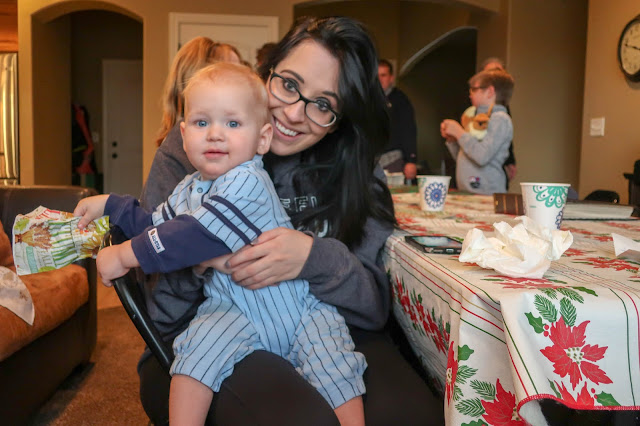 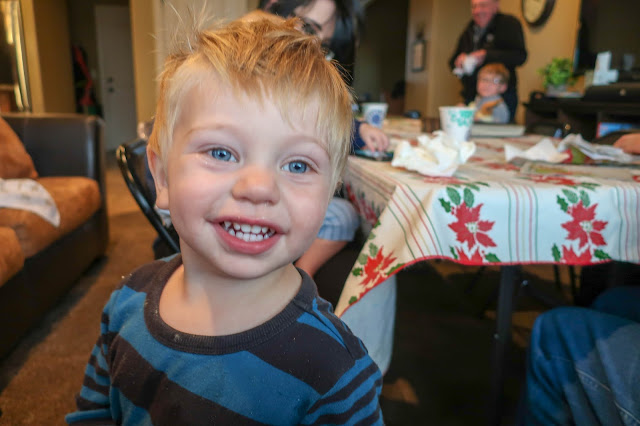 We're all baffled by how alike these two look lately considering they don't share any DNA (but they're sure adorable little cousins, anyway).

Here are some pictures Aunt Shayla snapped of the clean up efforts (don't be fooled by Rachel who is "helping" clean up by scraping the final bits of marshmallow from the sweet potato casserole dish): 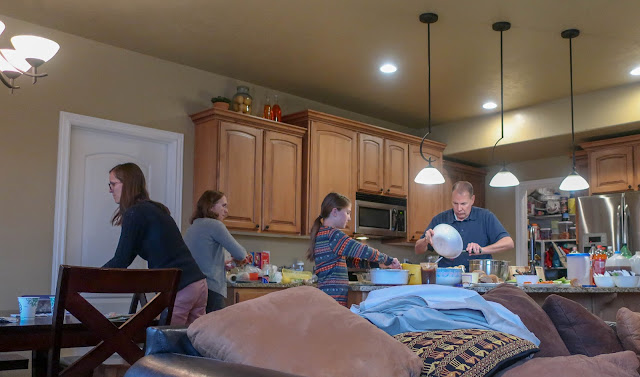 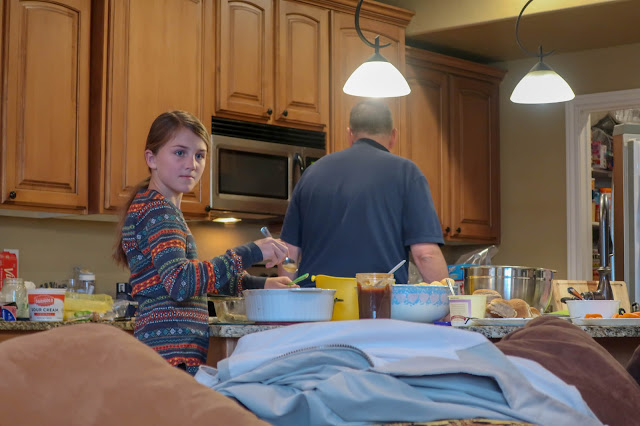 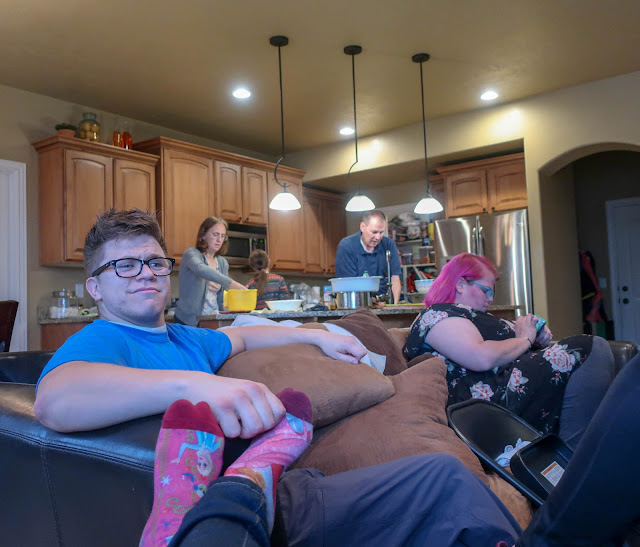 Shayla had lots of fun with my camera, it seems. 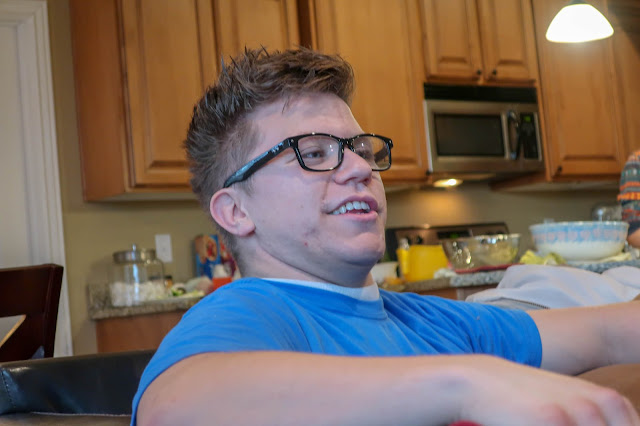 And then Rachel took over and she had quite a bit of fun with it as well. 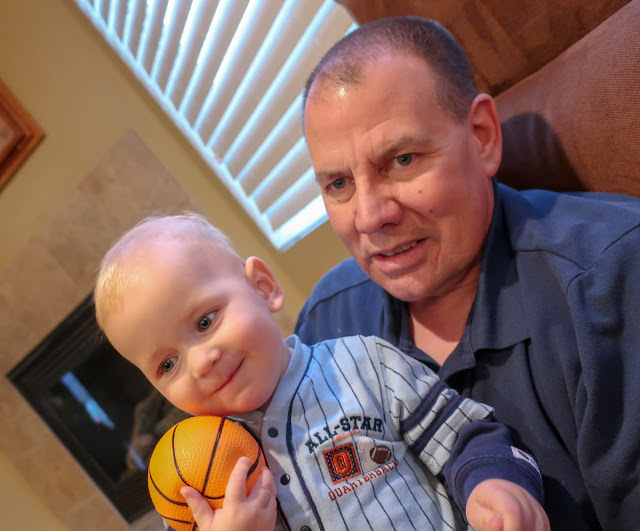 Here's Aunt Stacey reaching over to give Alexander's belly a tickle: 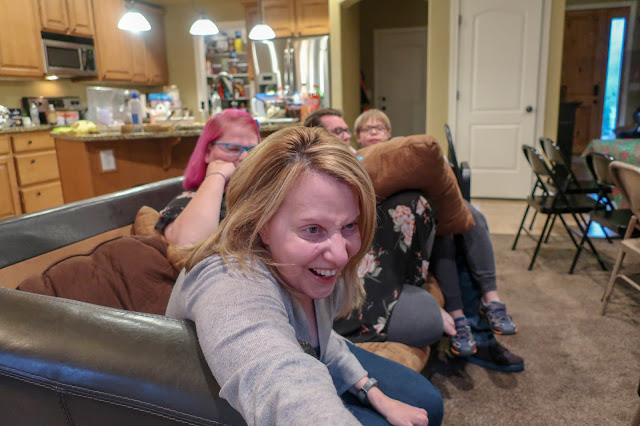 And here are the the Tangreens enjoying a snuggle on the couch:

Here's Alexander asking for his ball back: 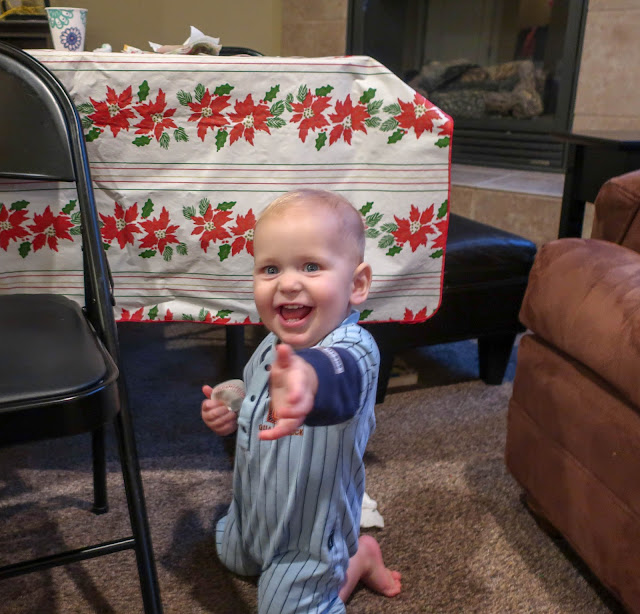 And here he is standing up—he stood up all by himself today (several times) without the help of anything but the floor: 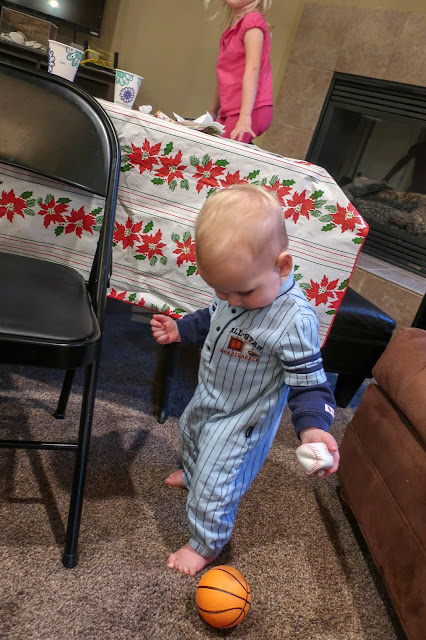 Here are a few portraits Rachel took of Kayl: 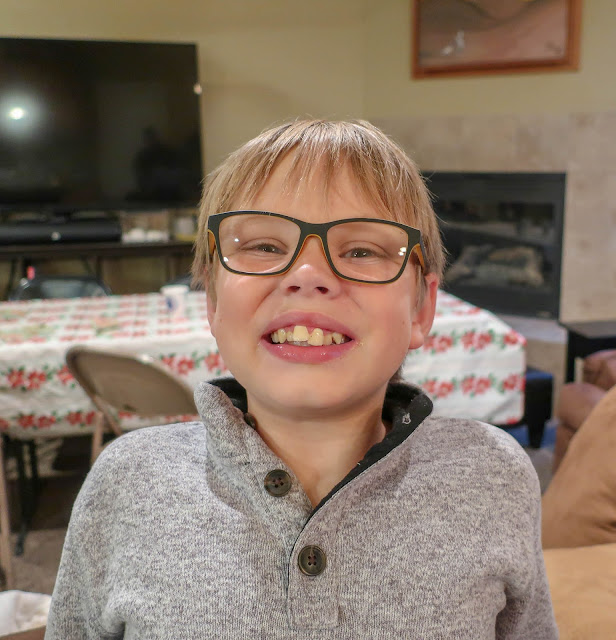 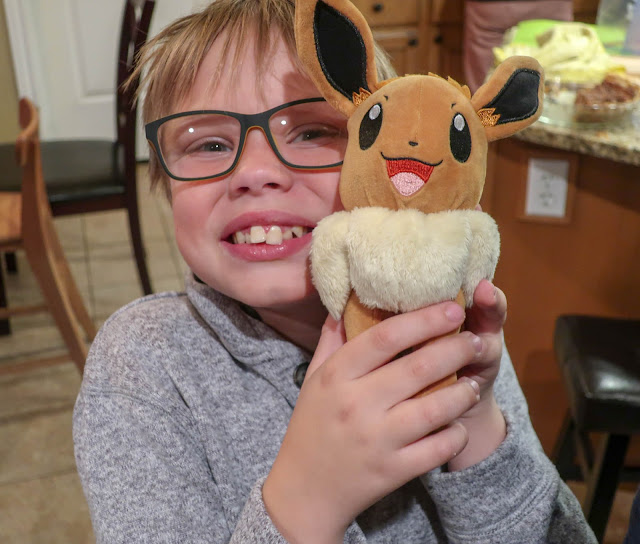 The next two pictures are rather blurry (because the camera figured what we really wanted to see was every detail on the faucet) but I liked them because they show Alexander's favourite game in progress—identifying facial features: 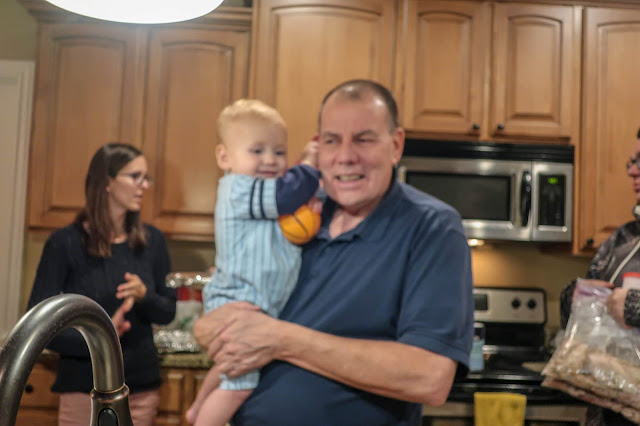 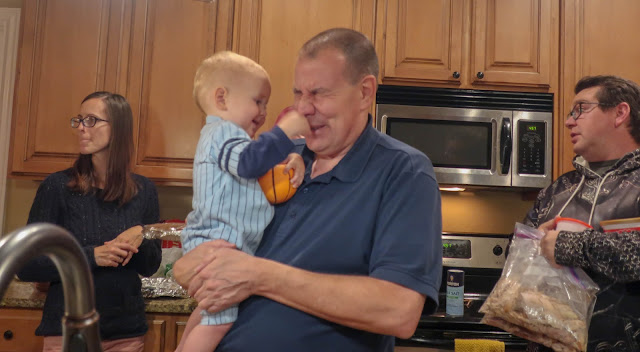 It was an odd Thanksgiving.
Bereft of gloom.
Bereft of joy.
Bereft.
Empty, yet full of emptiness.

I imagine we all felt very much like the mountains today (picture courtesy of Rachel), shrouded in clouds: 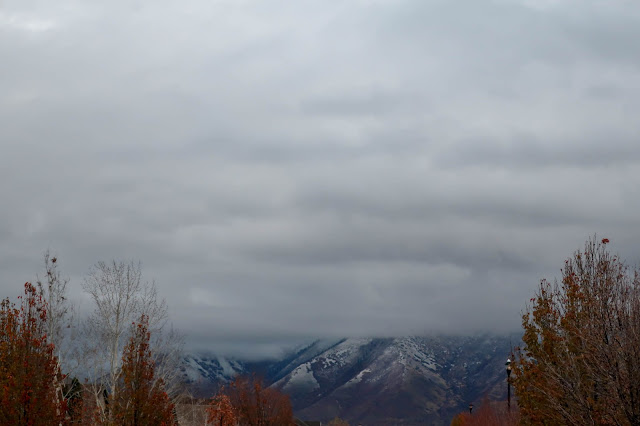 I don't feel the despair, the worry I felt the week Karen was dying anymore, and my grief has shifted from openly sobbing whenever I'm asked how things are to walking around in a fog. So I didn't feel particularly sad today but I certainly didn't feel very happy either. And Thanksgiving is one of my favourite holidays (Columbus aside—I grew up without necessarily attaching the whole Columbus story to Thanksgiving so I don't know how I feel about all that, but perhaps a day of mourning would have been more apt for our household), so I thought I'd feel at least a little cheerful. But nope.

Uncle Cory and Riley came over a little later in the evening for dessert and conversation (as well as Aunt Linda and Garrett—and thank goodness, too, because all the Heiss relatives fled the minute the sun started to set (they don't like driving in the dark, any of them (which I can't really blame them for)) which meant we had very few people to eat such a great number of pies, and while I can support baking your grief away, I'm not so sure about eating your grief away).

Anyway, Reid was saying something about how the whole month has been crazy, with Karen being sick, and then her passing, and then planning the funeral, and now hosting Thanksgiving dinner...

"It's kind of nice that way, really," Cory said. "It's good to get that first holiday out of the way. That way you know you can get through the others."

Cory's dad passed away shortly before Christmas during Cory's senior year of high school, so I'm sure his advice is sound. That said, we're hoping for a few quiet weeks before the Christmas rush—no holidays, no visitors, no chaos. Just the ol' grindstone of work and school and work and school.

Oh, Auntie Emily texted me this morning to ask me to check on her dad because she'd talked with him on the phone and he sounded either sad or sick. I stared at her text message for a while, thinking how I could possibly respond to that.

He's just going to be sick until he's not sick anymore.

He's just going to be sad until he's not sad anymore. And there's very little I can do about that.

I have no idea where the tail end of that is, either. Perhaps it's something that has no tail end. I have the feeling that's the case. I think, rather than being something that ends, grief is something you get used to having around.
Posted by Nancy at 1:26 AM