A snippet of our new daily grind

While the kids were busy with their math this morning (and I was sitting by Benjamin urging him on (my children have no concept of how to do exercises in a notebook because they've only ever done worksheets, really, but in the hopes of reusing these (expensive) textbooks with more than one child, I'm having my children do their work in a notebook and—oh, man!—they have no idea how title their page or number their problems or even write within the lines) I drafted up another fall poem.

The view from our kitchen window offers a lovely view of our tree-filled backyard and leaves are constantly falling from our trees. It's not even very much like fall here (yet—we still got into the 90s today) but the trees have had enough and are slowly dropping their leaves. We're constantly clearing our deck and walkways of leaves. I had to think of what things will look like when autumn is truly upon us.

As summertime draws to a close
The forest sheds its worn-out clothes.
It knows the year is growing old,
That winter brings death, dark and cold,
And so it offers us a pledge,
The final act of every hedge,
Of every bush or plant or tree
'Fore slipping into dormancy—
Pinecones, acorns, nuts, seeds, grain—
The promise things will grow again.
It tosses bright confetti leaves,
Bids us adieu and takes its leave.

It's almost time to start working on our annual Christmas poem so we'll consider all this poetry my warm-up.

We've been spending quite a lot of time with science this week. Our unit on recycling prompted us to listen to Greta Thunberg's speech together, which led us to research the Paris Agreement and a circular economy, which led us to a module introducing students to the idea of a circular economy, and everything just tied in so nicely. We're finished with our recycling chapter but still have more of the circular economy module to get through, so I think we'll do that before heading into the next chapter of our text book.


Our activity today was to go on a scavenger hunt to find things that don't belong in our environment (ie. trash), gearing up for our transition from recycling to discussing niches, I'm sure. My children are always up for a good neighbourhood trash pick, so we headed out this morning and collected a fair bit of recycling (old flyers, some aluminum cans), even more trash (mostly cigarette butts and water bottle lids, as well as some straws, match books, and a big mess of duct tape). I had to keep my children from stealing everyone's newspapers ("No! It looks like recycling and eventually—hopefully—it will be, but it belongs in our environment because those people want that newspaper"). Zoë was proud to find the best does-not-belong-in-the-wild thing of all: a shiny quarter! 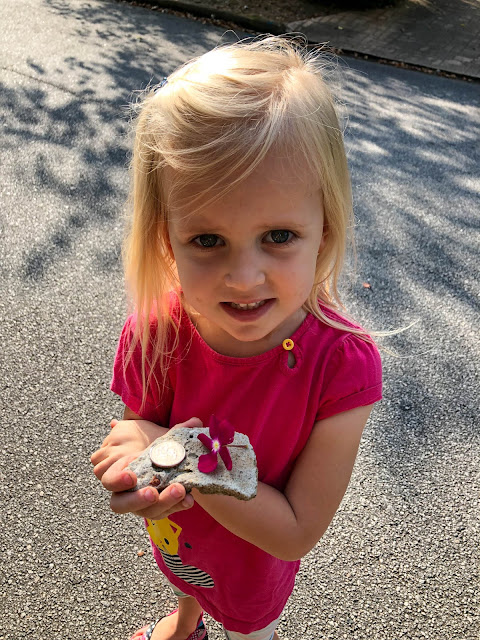 My children, however, were far more interested in finding natural things (which, in part, inspired my poetry later in the day). They brought home a whole bunch of things: acorns, walnuts, pine cones, magnolia seed pods, sweet gum fruit balls. When we got home we arranged them in a wreath because we like to do that sometimes. I especially love the blue jay feathers (we find them fairly frequently here). Those, along with that glass stone (which is not technically "natural," but which Benjamin insisted we include because glass is made by melting down sand and sand is natural), ended up in a "special collection" of Benjamin's. 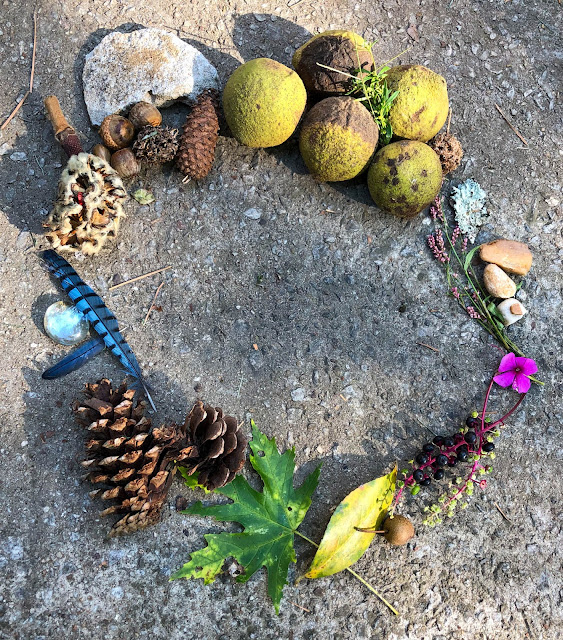 Those purple berries in the bottom righthand corner are called pokeberries and they are poisonous and prolific—they grow everywhere around here. Our children all know not to eat them (at least our children ages 4–12 (the other one will learn soon enough (I mean, he's been told, I just don't know that he understands))). Oddly enough, there's a regional delicacy called "pokeberry salad." I guess if you boil and rinse the greens (twice) you can consume them. That said, pokeberry salad poisoning is fairly common for those who attempt to eat this dish so I'm not sure that I can recommend it.

Apparently huckleberries are also in the "boil before eating" category of poisonous.

I had no idea.

Rachel told me about it because she learned it at school (because of Huckleberry Finn).

When she told me I had a hard time believing that was true because I grew up snacking on huckleberries like they were candy. I mean, I have vague memories of my mom telling me not to eat them because they were poisonous but everybody at school ate them (they grew all over the woods by our school and on the walk home) and nobody ever got sick because of them (including me...sorry mom).

But it turns out there's more than one kind of huckleberry.

Solanum nigrum—black nightshade, also known as huckleberry—is poisonous and should be boiled before consuming. But I've never encountered this plant (that I know of).

Vaccinium parvifolium—red huckleberry—is delicious and not remotely poisonous and it grows all over coastal BC (I feel like I've discussed this on the blog before). It certainly wouldn't be discussed in a classroom in Georgia. And that's okay (but also, it's the only huckleberry I know). 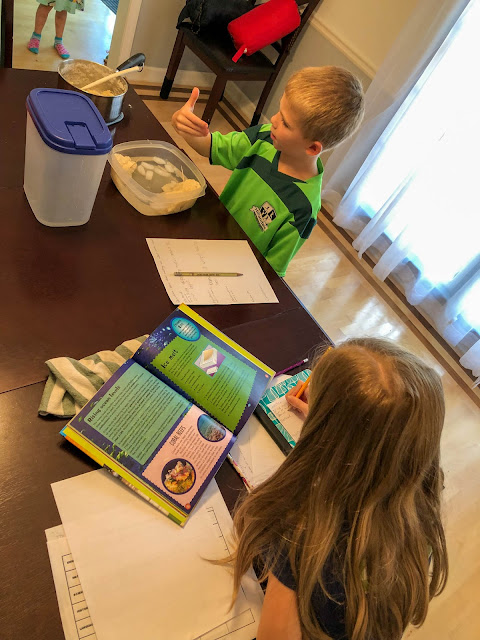 We made our paper earlier this week, which the kids were rather excited about. They want to do it again and we probably can because it didn't take long (aside from drying time). In addition to talking about recycling processes, we learned about the invention of paper and writing forms and printing presses and so forth. The kids had a blast with this unit (though I still need to let them use the paper we made; perhaps tomorrow). 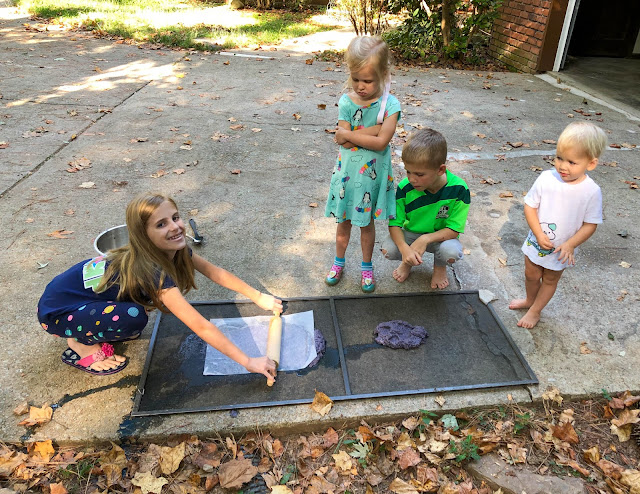 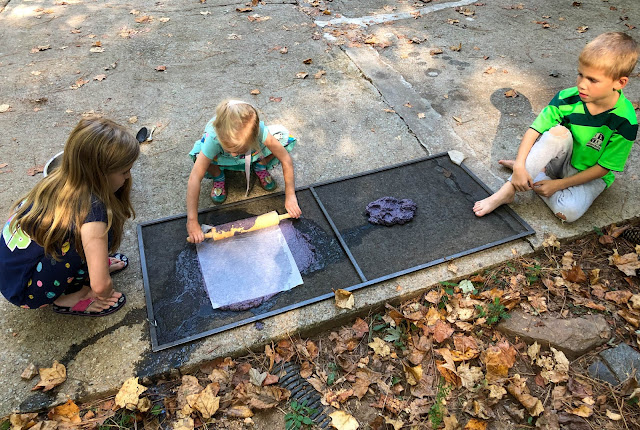 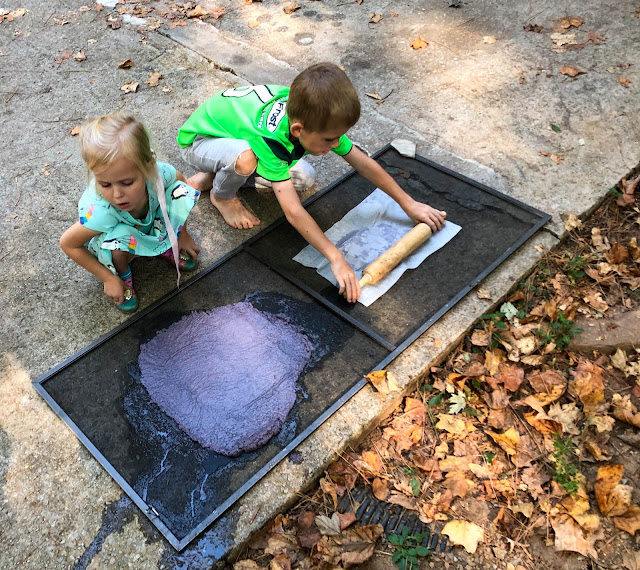 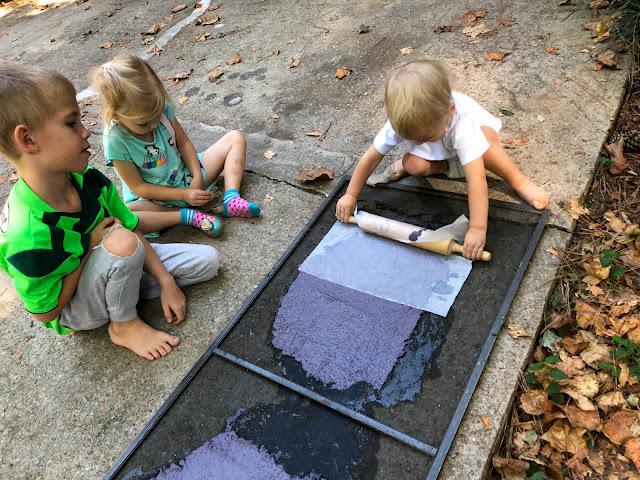 Benjamin had soccer earlier this week and asked us to stay and watch him play. Here he is racing the ball down the field (no one is stopping him because it's a drill; he was not actually this active during their scrimmage and instead stood by another player and talked her ear off the entire game). He seems to be enjoying his time at soccer quite a lot. 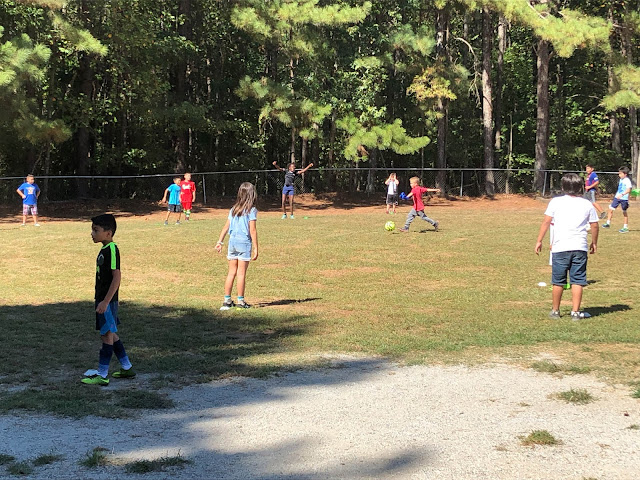 And here's Alexander, who was enjoying the playground quite a lot: 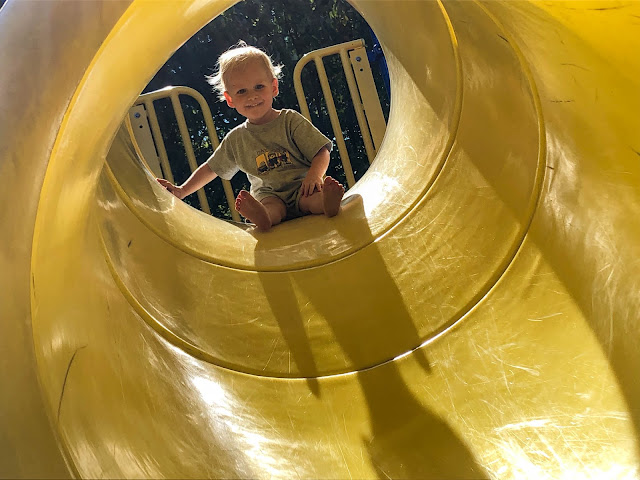 He did, however, learn to say, "Fireman pole!"

I wonder when I'll stop being surprised over the things he says and accept him as a walking, talking human being. Probably not any time soon because he's my baby.
Posted by Nancy at 12:41 AM