I love shopping second hand, scouring ads for just what we are looking for at just the right price (which, in my case, is often FREE). Fifty dollars and half a day later, we have bikes for all of our children and a basketball stand!

They were thrilled to get to ride around together this afternoon, though we just stuck to our little cul-de-sac because Miriam's bike ($0) needs new brake pads and Benjamin, who took the entire summer off of riding a bike after having just learned, wasn't feeling very comfortable on his new ride. Zoë was also struggling with the transition from trike to bike (though her bike came with a doll seat, which she's thrilled about) and Alexander can't quite pedal the tricycle. But Rachel was really zooming around, pedaling up the hill and flying down toward our house.

As excited as they were about their bikes, they were even more excited about the basketball hoop.

Even Alexander somehow knew what it was.

Setting it up took a bit of finagling (and this just after taking it apart so we could move it to our house), but we finally got it all put together and solidly supported and the kids (mostly Benjamin and Rachel) played basketball for hours. 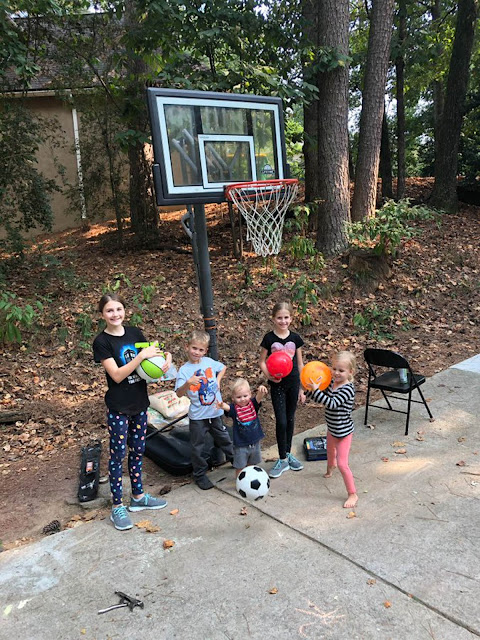 Here's hoping this hoop will see a lot of action in the coming years.

Not that we're basketball superstars (in fact, we're far from it). Basketball is, in my opinion, a more enjoyable sport than other ball sports. If I had to rank ball sports, it might go something like this:


The top four I enjoy watching and might even jump in to play. The bottom three...like...I dunno, man. I can't even decide which one I like least. Baseball? So boring. Football? Also so boring.

I just can't even with those sports.

I grew up playing street hockey and shooting hoops, myself, but have never...excelled. Still, though, I was able to have fun. I don't think I've ever had fun playing baseball.

Kickball, though! That I have some fond memories of.

I told Andrew we should look into some hockey equipment next, though the gutter drains are large enough to lose a small child (no exaggeration) so small balls would be lost down the drain constantly, so I dunno.

At any rate, we're happy with our new play equipment for now (and I don't think I've ever seen Benjamin come in quite as sweaty and messy as he was after playing basketball all day—and that's saying something)!
Posted by Nancy at 12:05 AM