We're two full months into this homeownership business and still can't seem to stay away from the hardware store. Today we needed to find some brackets and a hose and some curtain rods (and a drill bit, and...).

Andrew was going to take the two little ones on his own, but then I decided to go along with them so we left the older kids at home with a list of things to accomplish (homework, practicing, chores) before they'd be free to play their morning away. It's so nice having a child old enough to babysit (just saying).

When we got to Lowe's we headed over to the garden section to find a hose, which ended up being quite the adventure. Lowe's has all their Halloween wares out on display: pumpkins, scarecrows, skeletons, and life-sized replicas of witches and werewolves. We didn't know we'd be walking past such terrifying decorations on our way to get to the hose and honestly didn't even register them as frightening (since we'd walked past the Halloween decorations to get to the garden section we were already in a Halloween-y mood, I guess) until our children flipped out.

So we did what any parent would do in this situation and went by them again, this time with the camera rolling. The kids reacted just as much gusto as the first time.

Alexander must have felt like he was in one of those dreams where you have to run but can't move your legs, strapped into his seat, completely helpless. Zoë melted off the cart and leeched onto my leg. I had to drag her past the werewolf, around the corner to where the hoses were.

I realize not everyone thinks this is funny (thanks for that, Twitter..."Your kids will grow up to hate you. Hope that was worth it" (jokes on you, bro, because they were going to grow up to hate us anyway)), but my entire family was laughing about it so at least I know where I get my humour. I have one particular aunt who loves Halloween and decorates her house rather epically every year and she was terribly amused by Alexander's reaction (and probably wants (or already has) that werewolf).


My siblings were dying over the video. My mom watched it a million times (and she's one of the kindest people I know).

I mean, it's something you laugh about and then—of course—comfort the child and reassure them that they are absolutely safe and, in fact, were never in any danger at all. And that's exactly what we did. We held them and silenced their fears and then while we were measuring brackets they held each other a little longer, which was just the sweetest thing: 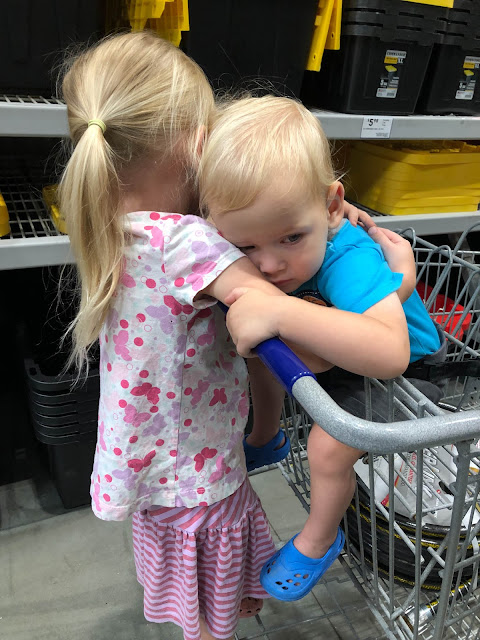 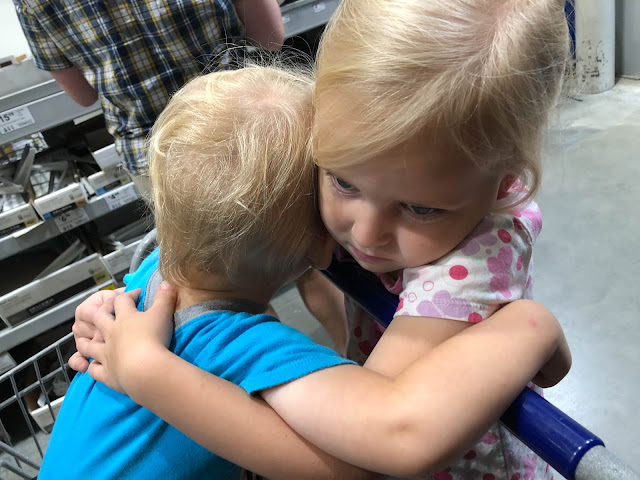 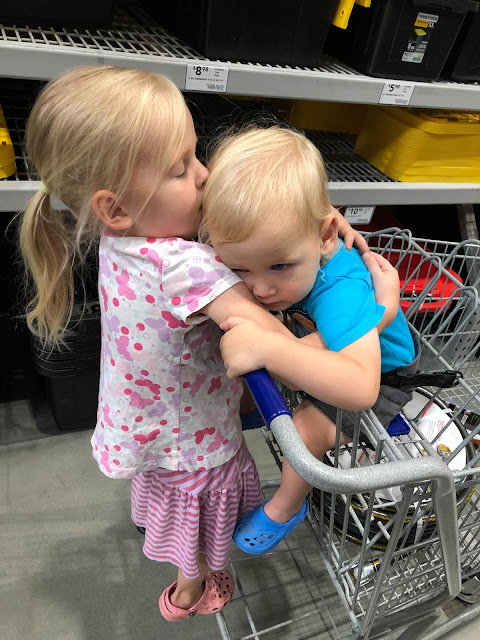 Zoë told us that when she grows up she's going to have four big kids and a baby and she's never going to take them to this store.

"What if you need something from this store?" Andrew challenged.

"Then I won't take my children anywhere near any werewolves! I will just protect them from everything!"

And that's a sweet sentiment, it truly is. But, my narrative might say that facing that werewolf while holding onto Mommy's hand was a way protecting my sweet child. Or at least, it was a way of exposing my child to something scary that she might encounter in real life (in the dark, on Halloween) and on that day she will already know that it's only for pretend and that although it might spook her she'll be able to summon the bravery to walk past it. That's power.

And it made for a rather memorable shopping trip! It's not every day you have to sneak past an evil witch and vanquish a werewolf (which Alexander has informed us was "too 'cary me") while searching for a garden hose—but today we did! What an adventure!

I think, rather than hating us over this, our children will (with time) look back on it with fondness.

While we were chatting about this video, my mom and Abra were talking about a shopping trip gone horribly wrong back in 1982. My mom and dad had taken my two oldest sisters and my two cousins (children of the zombie above) out for the day. The plan was for my mom and the kids to hit the beach while my dad did some construction work at a job site. They also had to pick up some things for the apartment buildings they were managing, so they decided to stop for supplies before going to the beach.

They loaded the three girls into the cart: my sisters Abbi and Kelli and my cousin Jenna. Lance got to be carried (on account of being a baby).

They parked the cart in the aisle and then turned their back to look at whatever it was they needed to look at and then pandemonium broke loose!

The three in the cart had collectively decided to reach for something—a glass bottle of some kind of poison—and had tipped the cart out, but not before tipping a bottle of poison off the shelf.

So the bottle smashes on the floor and all three girls tumbled out of the cart and into the mess of poison/glass on the floor!

And those poor girls! All these years later I can attest that they were more upset about missing out on their beach trip than they were about getting all cut up and bruised and covered in poison (my mom didn't note what substance it was that they spilled). Instead of going to the beach they rushed the kids home to take baths and get bandaged up (Abra still feels disappointed when she thinks about missing that day at the beach so it must have been pretty traumatic).

I mean, compared to tipping over a shopping cart into a puddle of poison and broken glass, walking past a mechanical werewolf seems like pretty mild trauma to me...

After this we took the kids to Costco where they were immersed in a twinkling world of snowflakes, Christmas tree, and cheery little elves (a little early for that, Costco).

Little do they know...along with Christmas comes Krampus.