Last night I got to get out by myself! I went (via carpool, of course) up to Lake Lanier for our RS campout dinner. I didn't spend the night because I'm really not sure Alexander and Andrew are ready for the emotional trauma that will entail, but I did skip bedtime.

It was a beautiful area and was such a lovely evening. I brought a sweater—because it's the end of September and I knew I'd be out late—but didn't even need to put it on! And to think it snowed in High River (and much of the surrounding area) today! Living in the south has its perks! 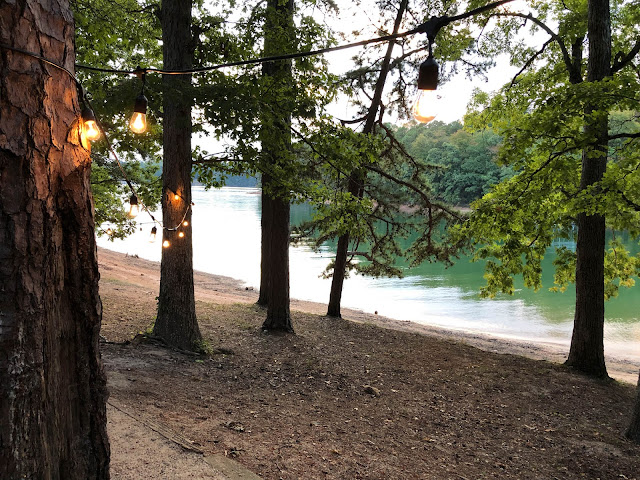 To introduce ourselves, we went around in a circle and said regular things (like our name, what ward we were in (it was a multi-ward event since this was planned before we were split), and how long we've lived in Georgia) and then we had to say what we would do if we were given a year of time to ourselves (assuming our children and grandchildren would be frozen in time and we wouldn't miss a moment with them).

The first thing I thought of doing was traveling!

Actually, I don't enjoy the traveling so much as the exploring. Traveling itself tends to make me feel sick (whether it's motion sickness or just sitting-far-too-long sickness, I don't know) so I don't particularly like planes or trains or cars or boats, so while I may not enjoy the getting-there part of things (or jet lag), I do like exploring new places.

Then, because I'm me, I figured this was a boring answer that everyone would come up with (hello, anxiety). But I went with it anyway because I couldn't think of another thing that I would spend a year doing* and oddly, it wasn't? I was the first one to say it and only a few other people mentioned wanting to travel extensively if given a year (with no responsibility and endless resources). In fact, a woman sitting just a few chairs down from me said that she is the complete opposite of me and has no desire to travel at all.

Is that even a thing?!

Anyway, after our introductions we were free to just chat, which we did and did and did.

And because I'm me I started looking at the time more and more frequently, feeling more and more worried about things. The gate locks at 10:00. I have to get home to my baby. Okay. Now it's quarter-till. I'm sitting in a borrowed chair that I don't know how to fold up. No one is even fidgeting. Why am I the only one feeling anxious? Should I say something? I should probably say something, but I don't want to rush anybody. Ten-till. Seriously. Somebody please stand up...

"Don't the gates lock at 10:00 or something?" I asked the women I was chatting with.

"Do they?" the woman across from me sprang out of her chair, knocking it over. "We've got to get moving!"

"Are you sure?" another woman asked. "They're automatic arms. I don't know why they'd have to lock them if there's a code to get in."

"It's just that I remember reading..." I began.

She organized this, so I went to check with her and she looked at her watch and panicked and started herding people off as well (though she, herself, would be staying behind with the overnight crew).

Camping isn't so bad. I actually enjoy it...under the right circumstances. Being locked inside a campground with no camping equipment when your poor husband and baby are expecting you home for nighttime wakings is...not the right circumstance. The campsite was a chaotic flurry of activity with ladies flitting about to gather their potluck dishes and figure out to close their dern chairs (that one was me, as I'd gathered my food up earlier because I'm a super-duper-prepare-o-matic (ie: anxious individual)) and say goodbye and find their rides.

"You sure know how to break up a party!" a different Brenda joked to me.

They've even written a song about me. You know it, I'm sure: every party has a pooper that's why we invited you!

Anyway, we were a few minutes late leaving the campground but fortunately they hadn't yet locked the gates for the night (there is a gate before the automatic arms that swings shut and has a big lock on it, which I'm sure they do lock every night, so I'm glad we made it out).

In other news, Andrew was accepted to present at ISA in March next year and it's in Hawaii and...I really want to go with him because (a) it's Hawaii and (b) I love to travel and haven't been anywhere "exciting" in a really long time. So...who wants to babysit for us...?

Kids complicate travel, I'll tell you that (though people also told me that and I didn't believe them until it was too late (but, like, kids are great so it's okay (they're just also expensive and thus tie you at home a little bit (which is typically fine because I'm a bit of an introverted homebody myself so being stuck at home all day isn't too much of a problem for me (until I feel like that itch to travel)))).

But it just wouldn't be cool to send my husband to Hawaii alone, right?

* I guess if I had unlimited resources and no other responsibilities for that year I should have dreamed of doing something philanthropic like solving world hunger or something like that. But...I didn't think of anything like that at the time. Maybe because I knew about this Hawaii thing...or because I'm inherently a little selfish?
Posted by Nancy at 11:49 PM