Saturday and Sunday with Naanii

On Saturday the rest of us spent a rather quiet morning at home while Andrew ran Miriam to a stake-level Activity Days event. The church is unveiling a new youth program this coming Sunday and I'm crossing my fingers that they've come up with a better name than "Activity Days" because I always end up saying silly things like, "There will be an Activity Days...activity...this Wednesday."

Anyway, in the afternoon we met my second-cousin at Webb Bridge Park. Dylan has lived in Atlanta for several years now (sixteen, she thinks) and I haven't seen her in many years, so I was a little bit nervous about becoming reacquainted (because I'm always nervous about that sort of thing) and was glad to have my mom as an excuse to break the ice. But I honestly had nothing to worry about! Dylan is just as nice as her mother was and is just as excited as I am to have some family in the area (and Canadian family to boot)!

She was running a little late, so here are a few pictures of us exploring the playground (which is a pretty neat playground): 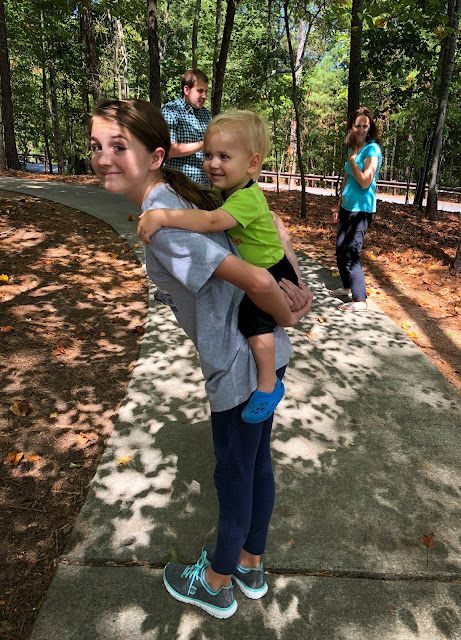 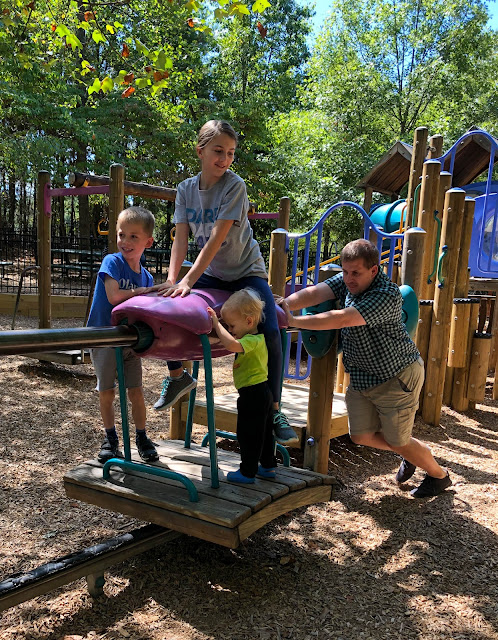 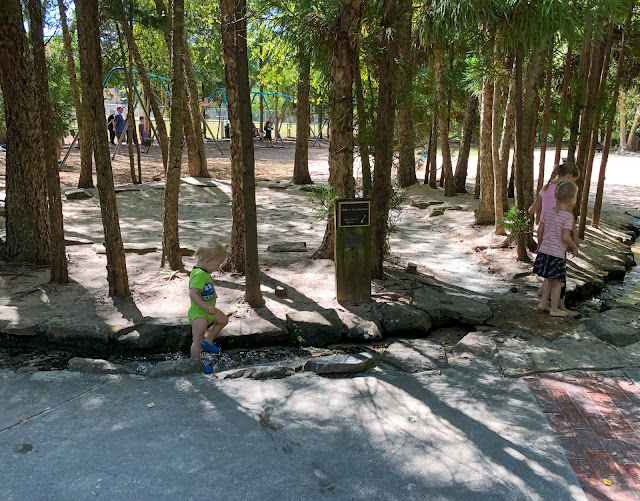 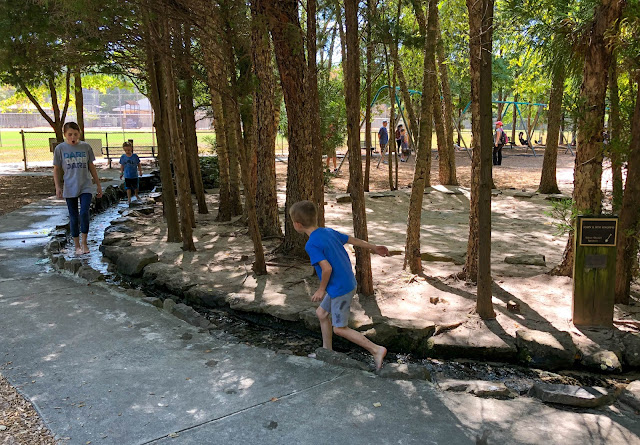 It was so fun to get caught up with Dylan. My mom shared a lot of memories about her mom with her, which Dylan appreciated a lot. Her mom passed away about four years ago (which is strange because it still feels so recent) and through misty eyes Dylan said it was so nice to get to talk about her here because no one here knew her mom and they don't think to talk to her about her or share memories and it was just so nice. So I'm very glad that I reached out to Dylan while my mom was here!

It was wonderful having my mom here, just soothing to my soul.

I needed her to tell me that my house was fine (even though things are continually falling apart). I needed her to support my decision to homeschool (which she totally did). I needed her to love on my babies and wipe off my table and chat late into the night with me (and she did). It made me feel more at ease than I have felt for weeks and weeks and I'm so, so happy she was able to come. But this happiness was tempered with a mixture of grief and guilt; I can't imagine (at least not fully) what it might feel like to lose a mother. Here I was, enjoying my mother, while Dylan and Andrew were missing their respective mothers. I miss their mothers, too, of course, but I imagine I don't miss them in the same way.

The good part, I suppose, is that although there is no replacement for a mother, there are always people willing to step in and be there for you (at least from what I've seen). We were talking about Zoë's favourite scripture for family night this evening, just talking about what each of the "fruits of the spirit" actually mean—love, joy, peace, long-suffering, gentleness, goodness, faith, meekness, temperance—and how we can emulate such traits.

Andrew's aunts are different now—they are more than aunts, if that makes sense. Aunt Linda is Aunt Linda, but she's also...somehow more special. And our visit with Aunt Lynnea last month was different than our visits have been in the past. She's always been a hugger, but I think she was more of a hugger, like she needed to make her hugs extra special—like a grandma hug (for our kids) or a momma hug (for Andrew). I don't know if that makes sense, but it's what I've observed with Andrew's aunts and it's what I've observed with my mother; they treat these fresh motherless children (okay, we're adults now...but it still really sucks to lose your mom and makes you feel, I imagine, vulnerable and helpless...like a child) with a little more gentleness.

And I think it's so great.

I mean, the loss is hard. But the outpouring of love is magical.

Anyway, it was fun to visit with Dylan and I'm excited to get together with her in the future! 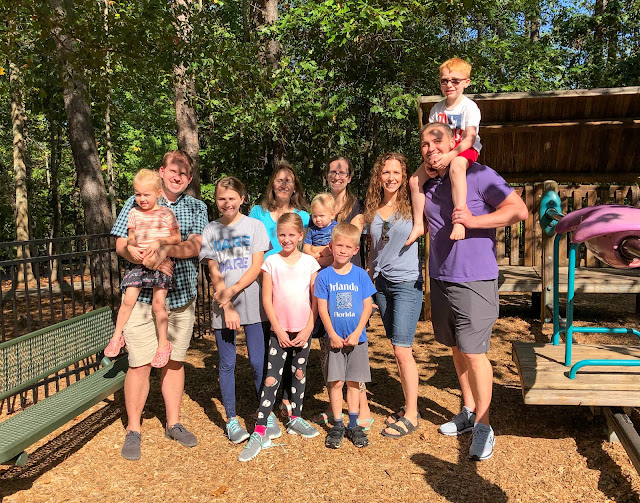 After saying goodbye to Dylan and her family we headed to Cook Out for dinner (which was loud and filling). Then we came home for bath time and bedtime. Once we had the babies in bed (Zoë won't like that I included her in "babies"), we went downstairs to play Mexican Train. We have to play in the basement because some of us (*cough*Benjamin*cough*) get a little loud when we play games. 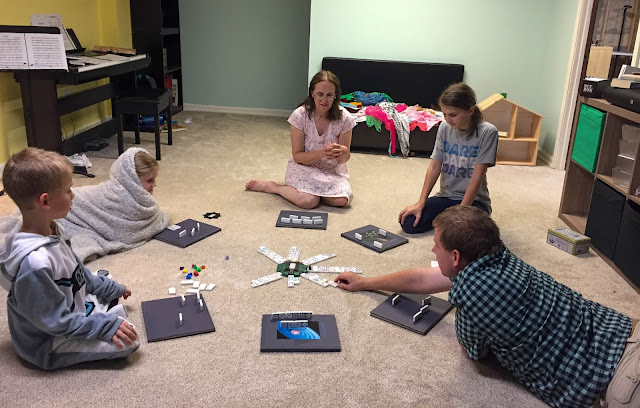 To be fair, I suppose we all got a little out of hand. Rachel laughed so hard that she threw up a little (her wonky esophagus is a little touchy still, though she's mostly grown out of spontaneously vomiting). It was fun to play and laugh together.

Sunday morning was spent just getting ready for church and to drop Naanii off at the MARTA. Zoë practiced her talk for Naanii and Miriam ran through her prelude music for her as well, so even though Naanii wasn't able to go to church with us, she got to at least hear the bits we were a part of.

Oh, and she read some more stories to the kids, of course: 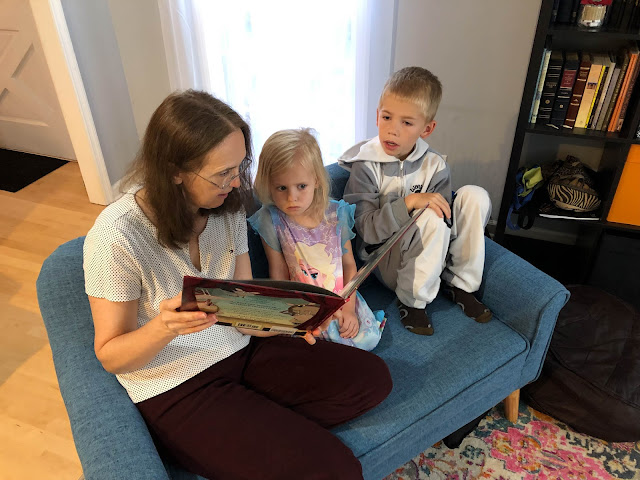 Here we are right before hopping in the car (late!) to head to the station. I had someone coming to get the very last (!!) of our cardboard boxes (yippee!) and told them I would just leave them outside because we had to drop my mom off for a flight but then they showed up to get the boxes right as we had to leave, essentially trapping us in our own home; we had to wait for them to load the boxes (while we all did our best to pretend we weren't home...because human interaction? No thanks). In retrospect we should have probably just helped them load the boxes so we could hightail it out of there. But...we didn't. 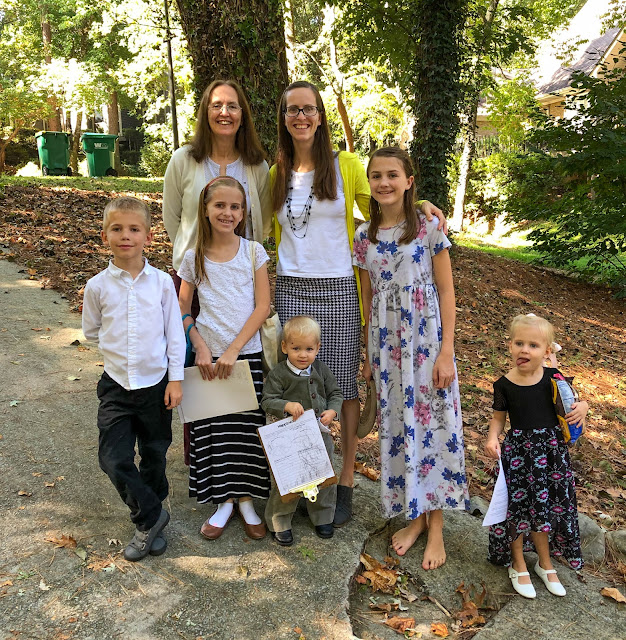 In my mind I thought this would be a beautiful picture because we were all ready for church, but in practice every single shot has a child with their tongue sticking out, there's some bare feet, a bag of pretzels, a baby lugging a clipboard, poor Miriam laden down by organ books/shoes and scriptures and...it's just us coming apart at the seams like we usually are. I don't know why I thought it would be any different. But I guess it's still a beautiful picture because it's us.

Oh, and we saw this fun repurposed street sign while we were at a red light: 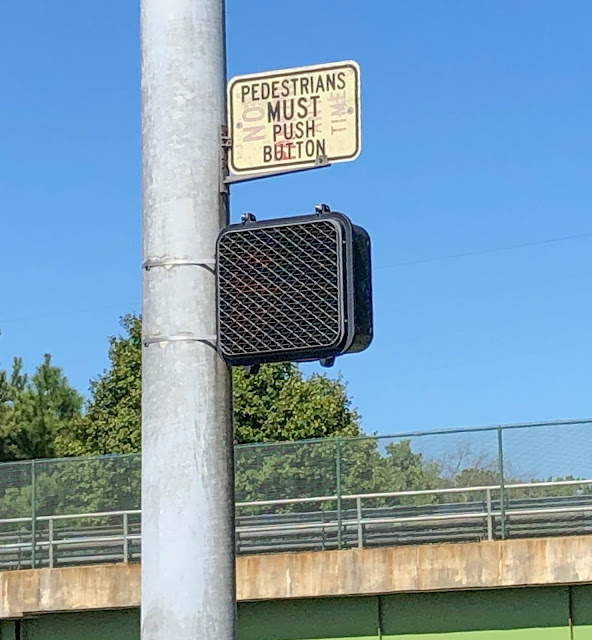