The poor guy wasn't feeling well on Sunday and was running a low-grade fever all day. I'm not sure if it's from his flu shot or whether it's simply of an unexplained origin, but he was pretty miserable (he's all better today though). Here he is napping with Daddy after church while I finished decorating his cake: 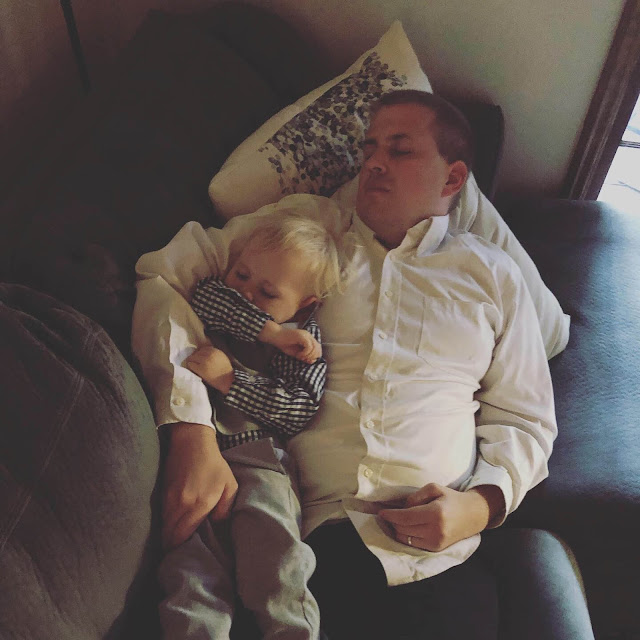 I made spice cake with boiled caramel icing on top. Ordinarily I use buttercream, but I felt like a spice cake needed something a little different, something a little more autumnal. The recipe said to spread it on the cake while it was still warm and it was not joking! It was so difficult to spread once it was cooling and it started cooling off the minute I poured it on the cake...so I had a terrible time getting it to spread around the sides of the cake. It was about the consistency of fudge—there was no spreading that!

Ultimately I gave up and made up a small batch of buttercream to fill in the voids (since I needed buttercream for decorating anyway). It ended up looking...somewhat purposeful... 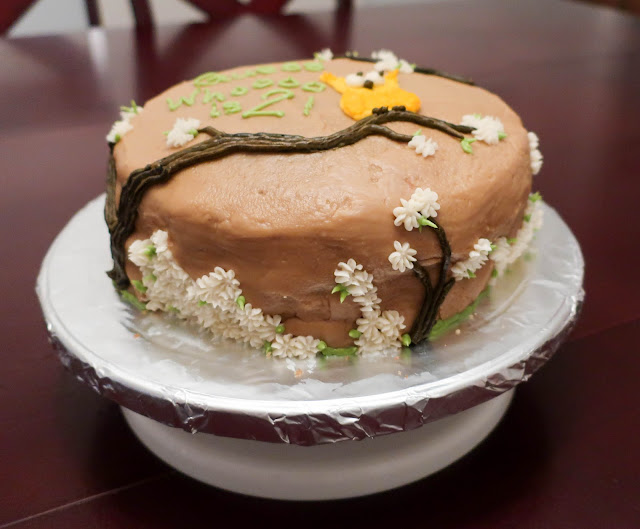 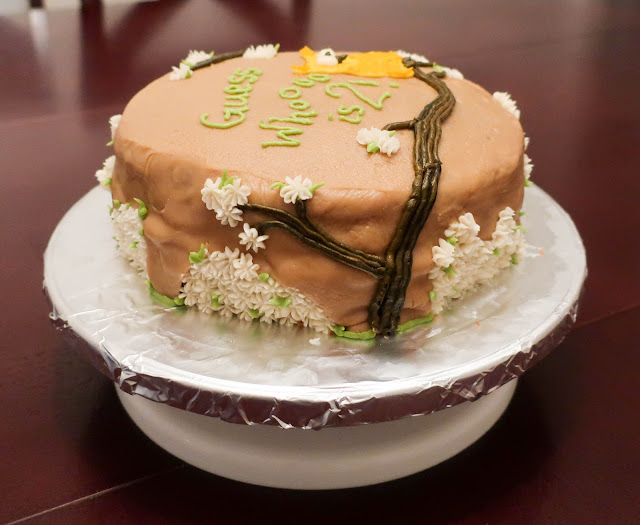 It was around this moment in history that I realized we didn't have very much food colouring. I didn't pack any of our liquid food colouring and so all I had on hand was a random assortment of gel colouring that I took from Karen's stash before we moved: brown, black, green, yellow, and purple.

Those are good colours but not quite as functional as primary colours when it comes to creating the exact colour you want...but we'd decided to go with an owl theme for Alexander's cake (since he really likes birds and is rather fond of "birdie owls" in particular) and these colours seemed to lend themselves to a forest tableau. 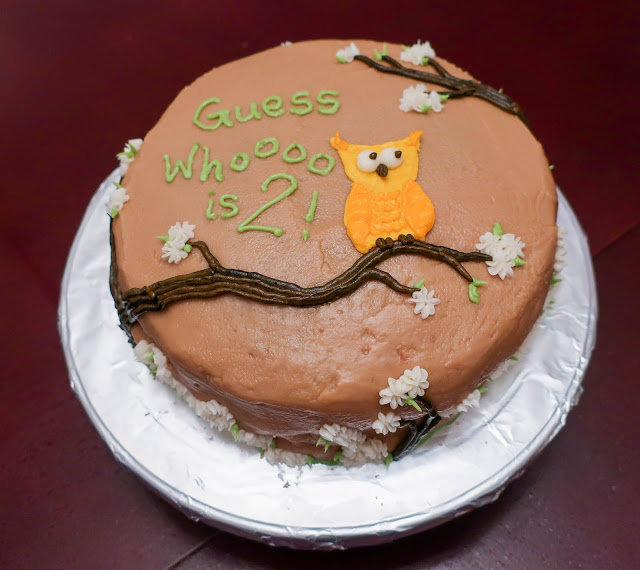 Alexander was quite pleased with his cake. He was even more pleased that I'd left it on the rotating cake stand. He spent several minutes spinning his cake around while everyone else gathered plates and utensils and napkins. 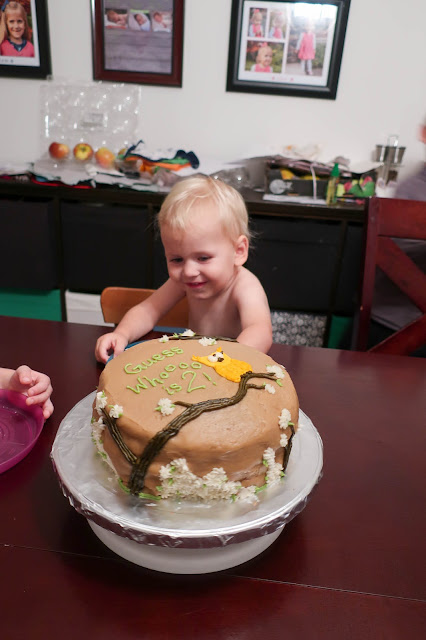 Here he is with his #2 candle: 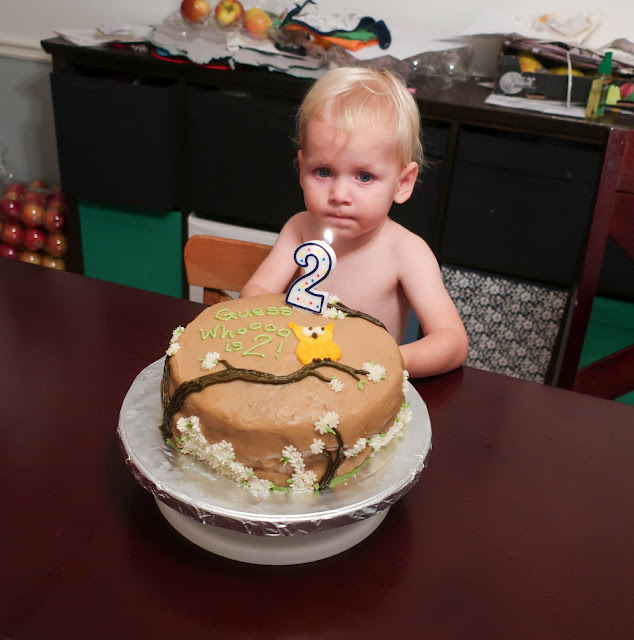 He was a good boy and patiently sat looking at his candle while we sang to him. We had to prompt him a little before he blew out his candle and then he immediately reached over to take it out of his cake (from which he learned that fire are hotter than expected (but he didn't get burned so...all's well that ends well)).

Here he is trying desperately to get his cake to stay on his fork: 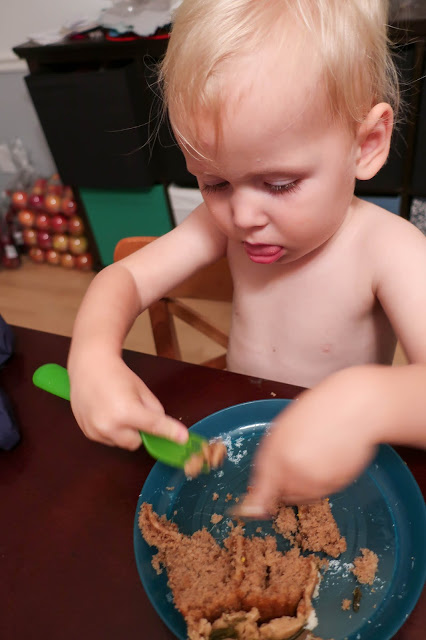 And here are his sisters enjoying (Zoë) and patiently waiting for (Rachel and Miriam) their cake: 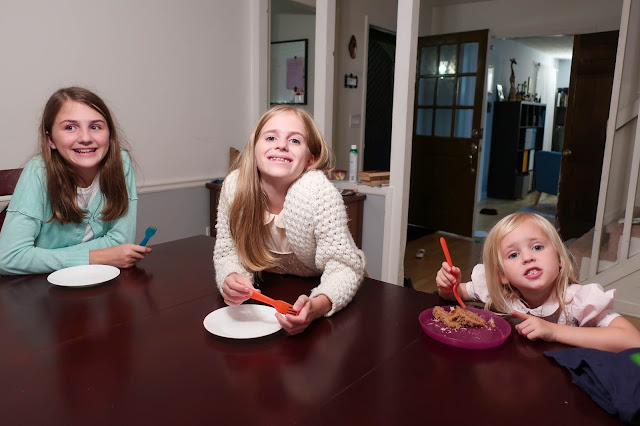 Our presents were pretty sparse this year, so thank goodness for out-of-town relatives who remembered to send presents when I so clearly forgot to think of anything until it was too late.

Benjamin wrapped up some very familiar toys in an old baby blanket: 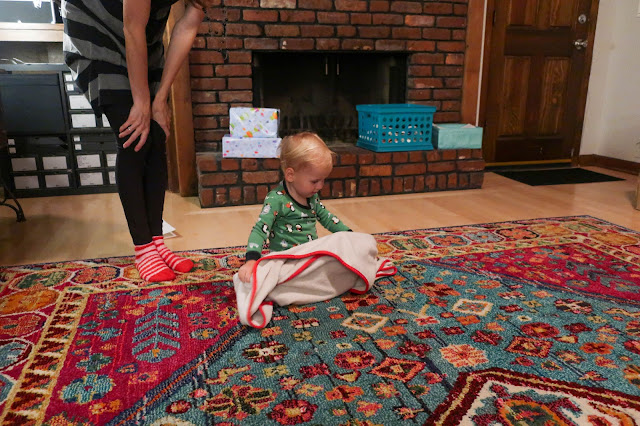 Alexander wasn't terribly impressed by this. He knew it was his birthday and was expecting something somewhat grander. (Also, did you notice my socks?! It's been chilly enough to require fuzzy socks the past few days, which is kind of nice (though we still went out in shorts and short sleeves this afternoon)).

He was much more excited about his actual birthday presents. My sister Kelli (who shares a birthday with Alexander) sent him a little puppy in a carrying case. He loves it! 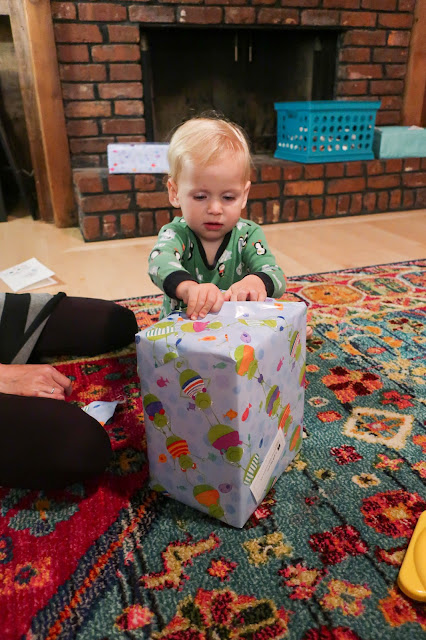 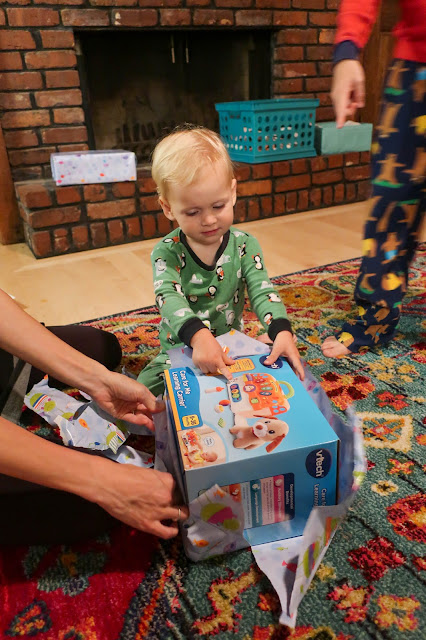 He gave it a hug the minute it was out of the box (though we missed getting a picture of it). Here he is feeding it its bottle: 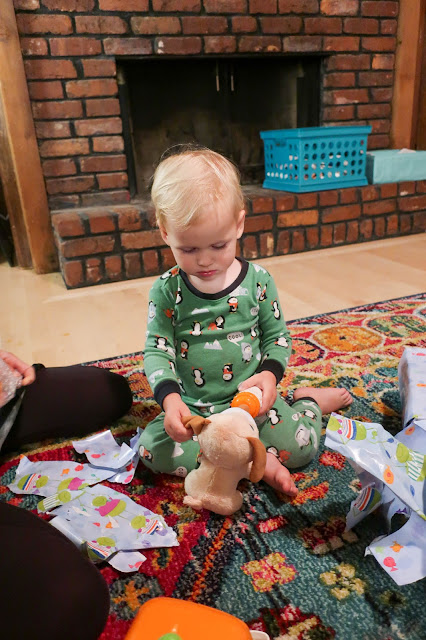 And here's Alexander opening his gift from Naanii and Bumpa and Auntie Josie: 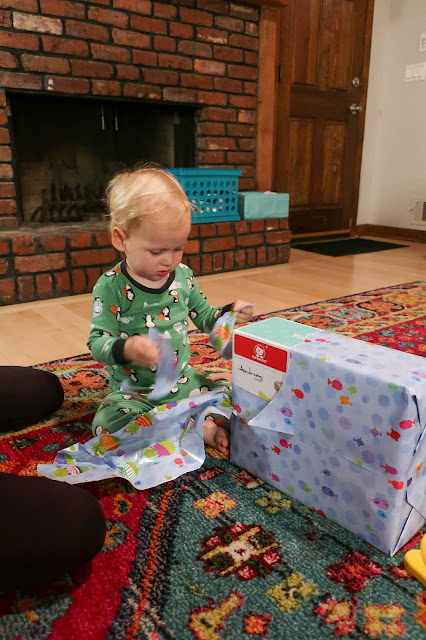 They sent a little car track that looked very interesting to a couple of older siblings. When Benjamin said, "Oooh! I want to try that!" Alexander pounded on the box and said, "NOOOO! MEEEE! My birthday!!"

Here he is having the coveted first turn (looking a little bit like he was a sick little baby who needed to be put to bed (because that is 100% what he was)): 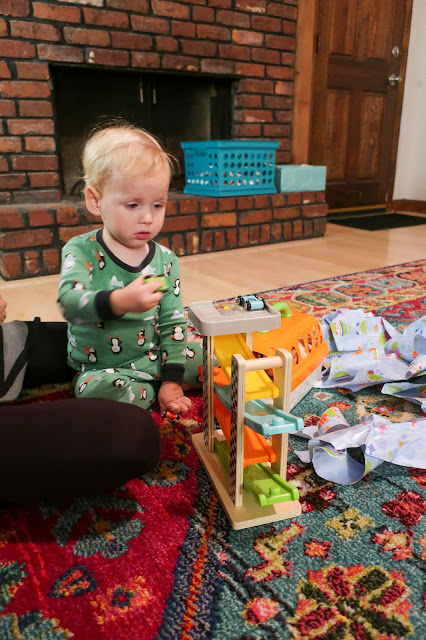 Here is the card that Miriam made for him: 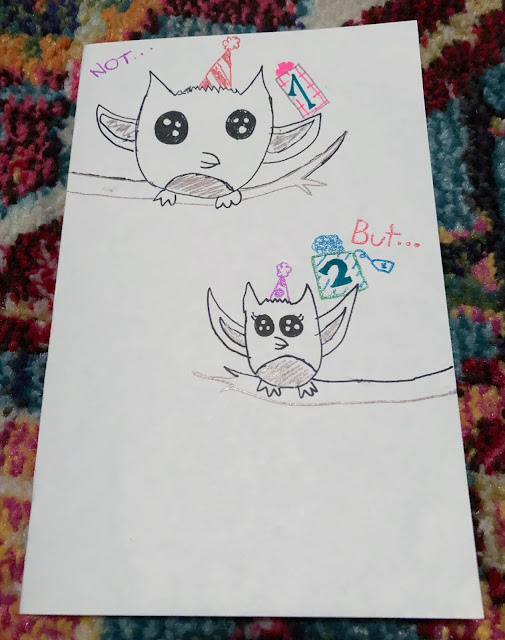 Inside she wrote a poem: 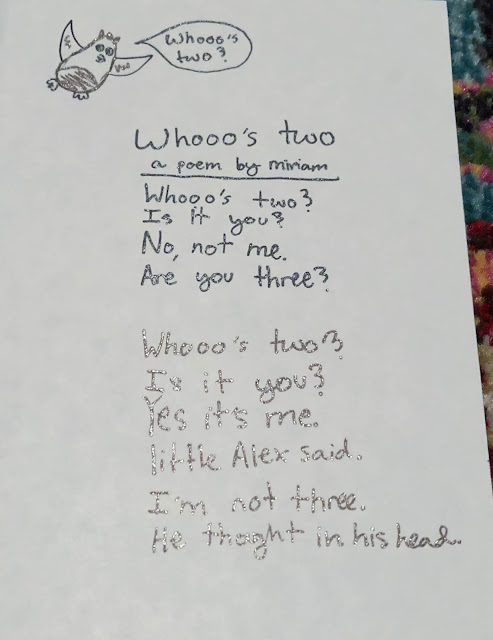 
Little Alex said.
I'm not three
He thought in his head.

All in all it was a pretty good birthday for Alexander (sickness aside). This morning the kids had a lot of fun playing with his toys (and completely taking them over). At one point Benjamin and Zoë were both no where to be found, along with Alexander's new toys, and Alexander brought me the empty box from one of his presents and said sadly into the box, "Where are you, my birthday?" So I had to help him find his toys and pry them from the grasp of his jealous siblings (who were so ridiculously naughty today).

The novelty of these items will wear off soon, I'm sure, and then perhaps we won't have as many fights over them. And perhaps we'll get settled into a routine at home once again. Last week was crazy, trying to fit homeschooling in around three doctor appointments, two dental appointments, and a trip to the urgent care (but we did it, by golly!). This week we only have two doctor appointments...and no evening relief from Daddy because he'll be returning after bedtime every day this week.

So, like, I basically am expecting chaos to reign again this week...but next week, perhaps, we'll settle back into a routine.
Posted by Nancy at 10:20 PM