Rachel had an early-release day today so after she got home we went to the park to enjoy our afternoon. I'm so glad we have this park close by. Honestly, living in a city this big sometimes can feel overwhelming and having parks like this available offer a bit of relief from the bustling atmosphere of the city—a little wildlife retreat in the middle of everything.

Anyway, we had fun playing tag at the playground and doing some urban hiking together.

(I feel like I should mention that as I sit here writing this I can hear an owl hooting outside my bedroom window and a train whistle sounding in the distance (probably around the park we were at earlier today)).

Here's Alexander getting ready to go. He wanted to get a water bottle because some of the other kids were so he climbed up to grab a full cup of water from the counter. 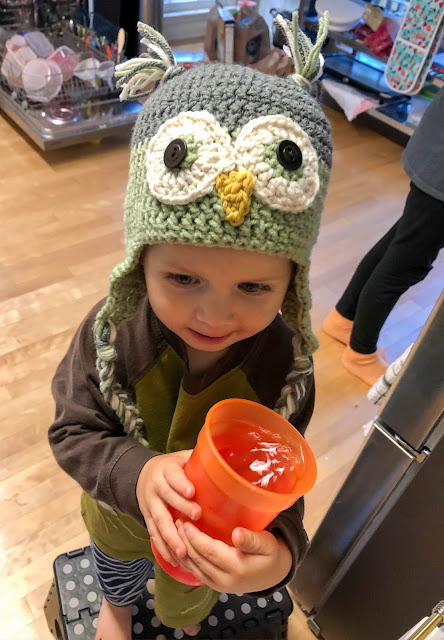 I tried to catch him saying "water bottle" and sort of did. It's really not his best speaking because when he says "water bottle" there's usually some more distinctive tongue-flapping going on, but this will have to do until I can snag a better picture. And, yes, in case you're wondering he did spill a great quantity of water on the floor.

When I took that cup away from him he reached for (yes) another full cup on the counter. He says, "My water bottle," right at the beginning of this clip:

He's wearing that super cute owl hat because I just finished putting the face on it this afternoon and he's completely in love with it (Rachel and Miriam had a great time sorting through my great-grandma's button collection to find a couple of matching eyes for his hat). He's been fascinated by birds for a long time and particularly loves owls, so even though I have a perfectly good Frankenstein costume (that I made for Benjamin) in his size, I decided to make him a cute owl costume instead. I couldn't help myself. He's just so obsessed. Like, he calls pretty much all mammals "bunny-deer" (besides cats and dogs) but has a billion words for birds. He knows birdie, owl, duck, goose, turkey, chicken, blue jay, cardinal...

But he sees a squirrel and he says, "Bunny-deer."

He sees a rabbit and says, "Bunny-deer."

He sees a chipmunk and says, "Bunny-deer."

He sees a deer and says, "Bunny-deer."

But he can identify that bird for you (in his own little two-year-old way).

I spent most of my time at the park following Alexander around. He's been wanting to master this rope contraption for quite some time (we've mostly come to this park while he was either not walking at all or was barely hobbling around, due to whatever went down on the trampoline with Benjamin) and thought today was his day. He climbed up the ladder: 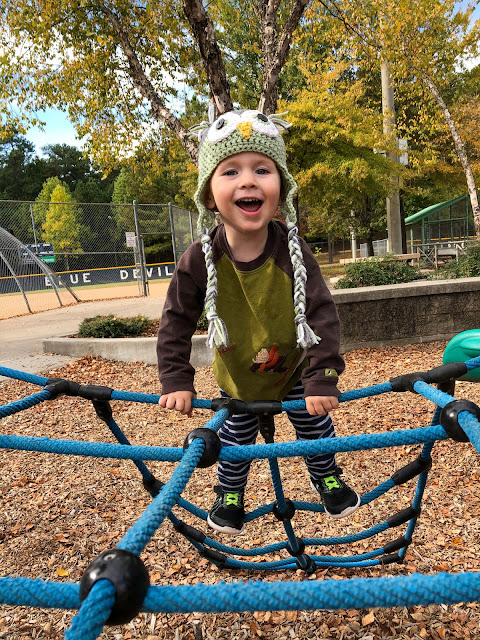 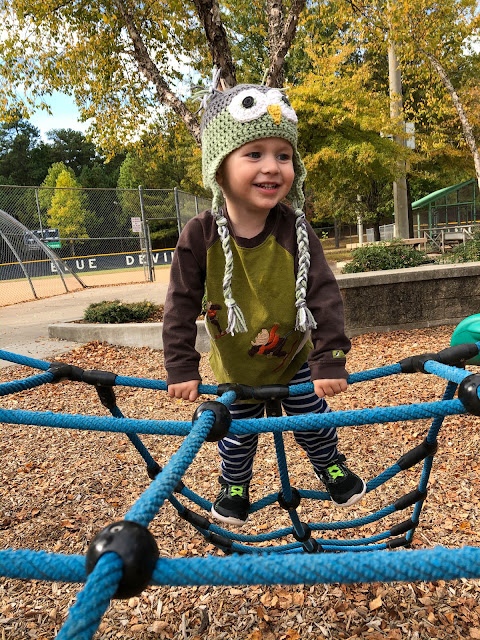 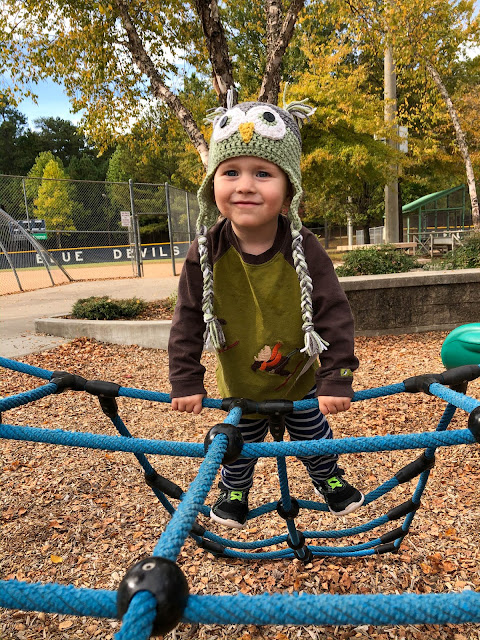 And then made his way onto the...thing...feeling very proud of his little owl-self. 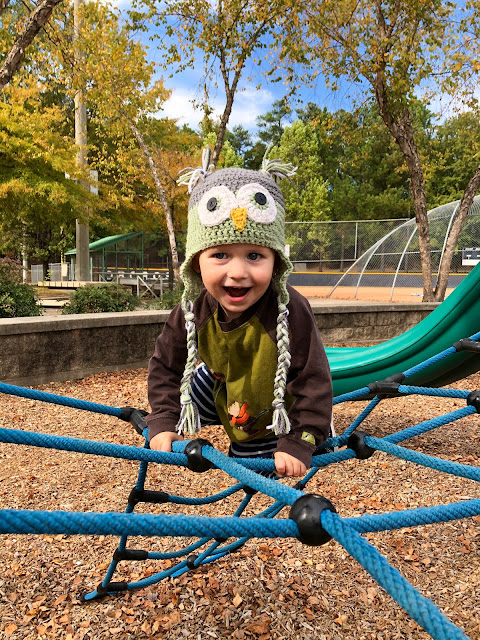 But it ended up being a little too tricky for him today:

He had been saying (before he fell) about how "tall" he was (at least, I think), so I initially thought that's what he said in the video, but now I think he probably said that he's stuck (though I echo him by telling him that he's so tall, so he probably thought I was crazy). Obviously the bigger kids were all screaming and running around so I wasn't doing my best listening. But I love how he says, "Tan oo hep me, Mommy? Tan oo hep me?"

This rope course was a little easier for him to do: 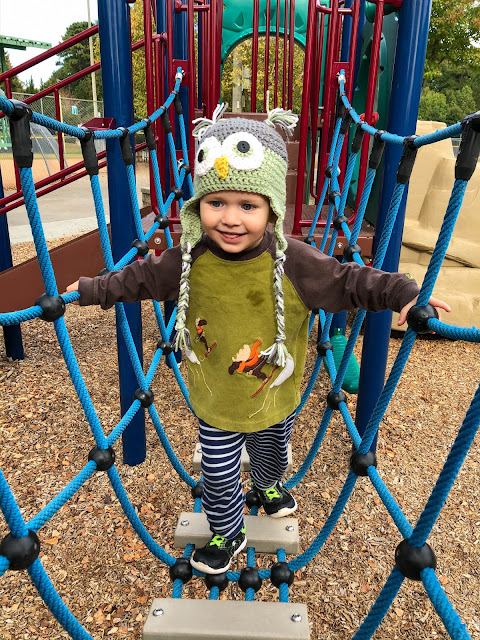 And here are a couple of pictures of Rachel and Zoë playing tag (I think they were play freeze tag at this point so I think this is mostly Zoë unfreezing Rachel). Somehow I missed the other two... 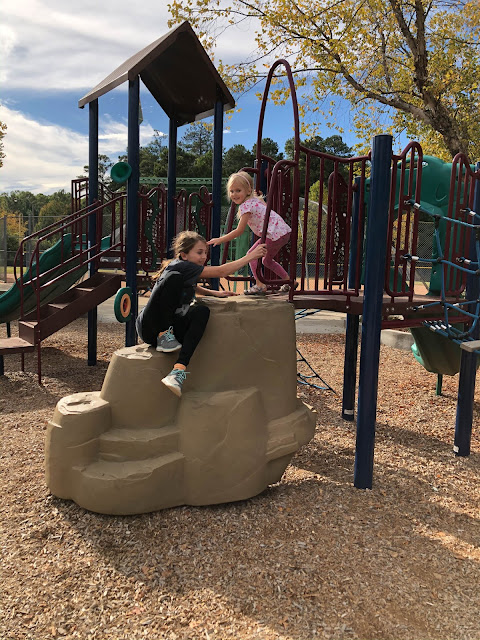 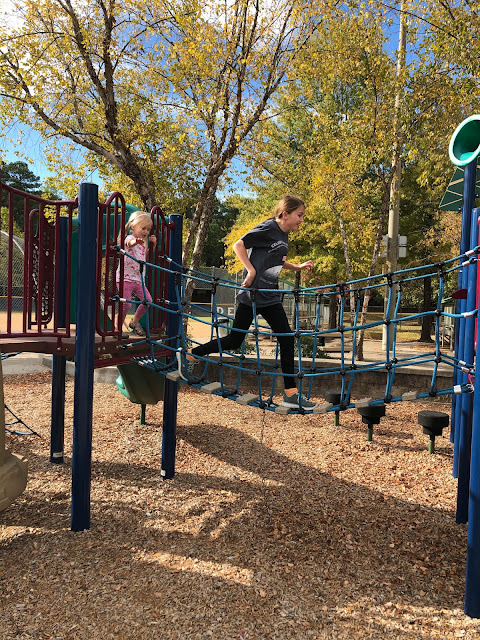 As you can see, it was a perfect fall day. The sky was as blue as could be and the leaves are just starting to turn. 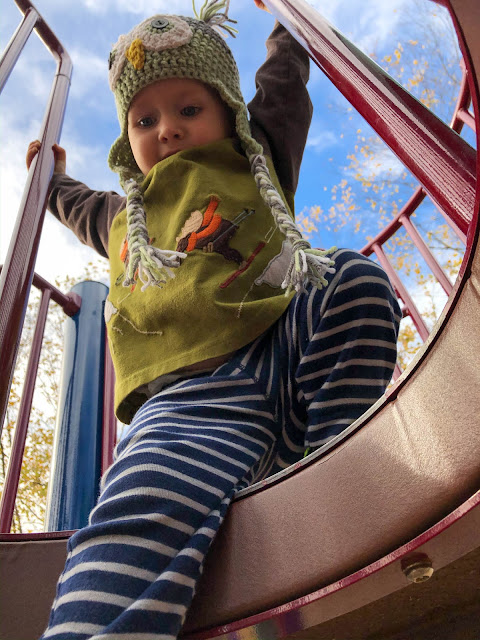 When the kids were doing more fighting than playing I coaxed them onto the trail. Here are Rachel and Miriam swinging Alexander a bit while walking around the pond: 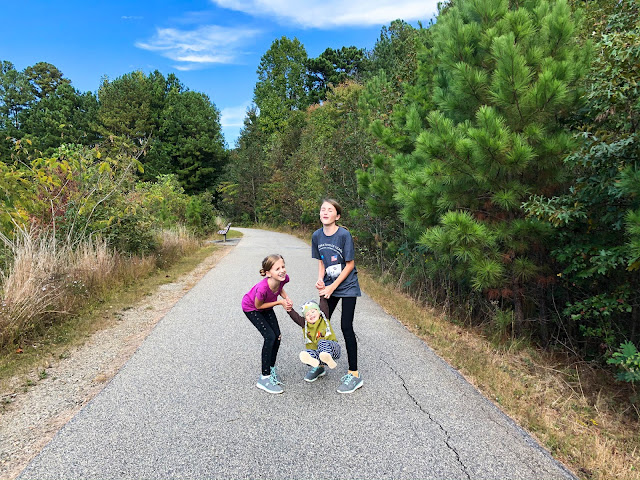 And here are the kids with the pond behind them: 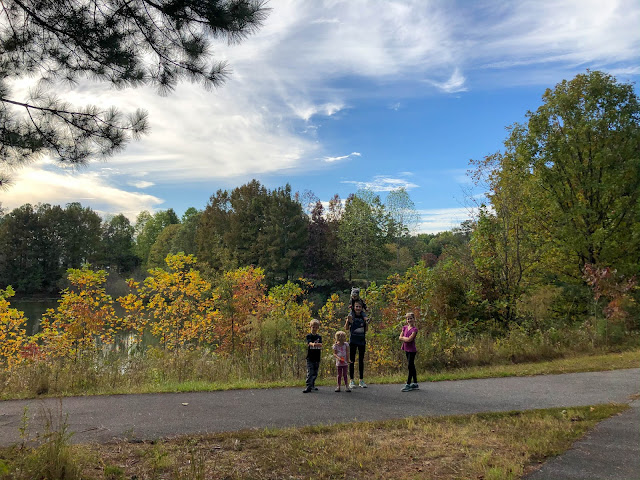 I stopped the kids for another picture along the trail because the sunshine was just so pretty filtering through the trees. So I lined them up, asked them to smile nicely, and counted to three.

She had pulled her pants down to moon me! Where did she even come up with an idea like that?! 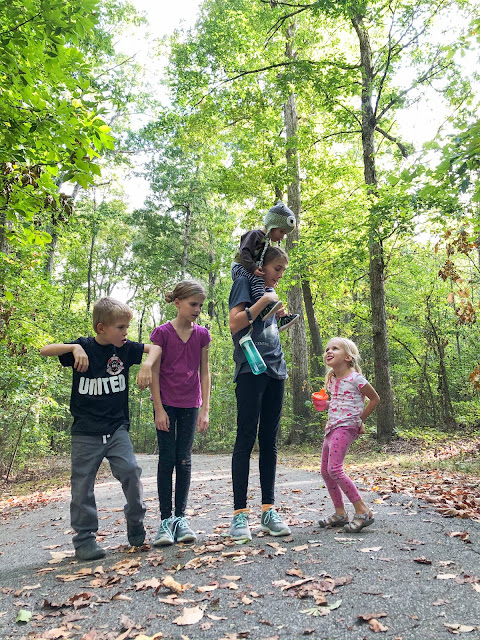 And here they are all saying, "You did what?!" 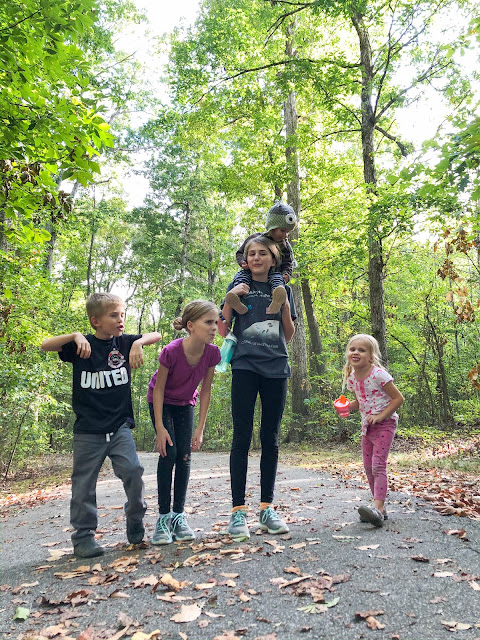 (Benjamin's arms are like that, I think, because that's how he'd decided he wanted to pose for the picture (the one that didn't happen)). 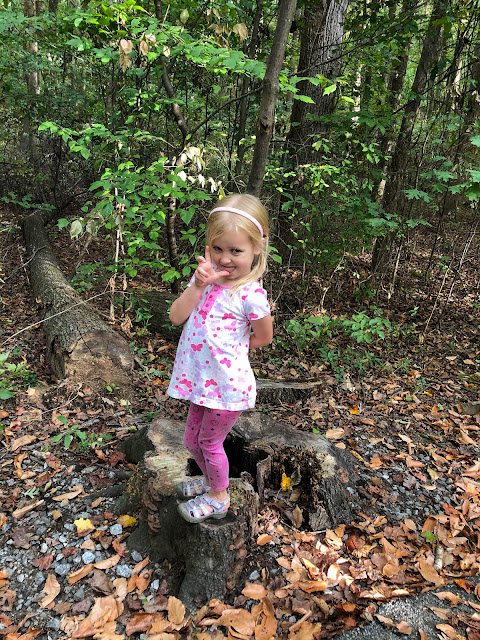 And here's Benjamin on top of a big tree stump: 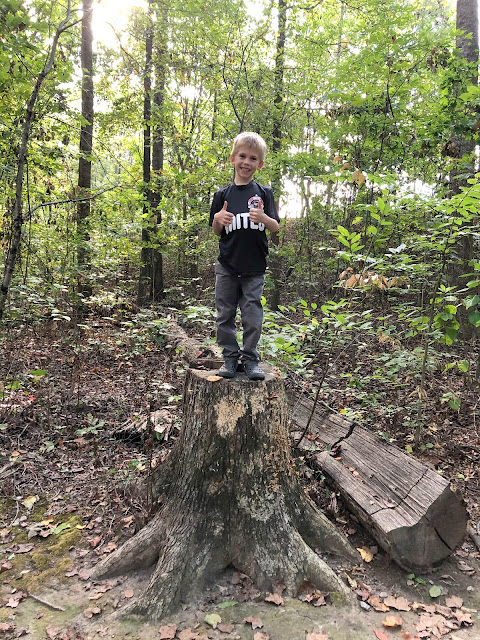