You are my Sunbeam, my only Sunbeam...

I have another story to add to my repertoire of missing Sunbeams, but this time instead of being the one to lose a pupil, the lost pupil was one of my own.

Being the big two-year-old that he is, Alexander went to nursery quite well this week. I promised him that I'd stay with him the entire time but I didn't interact with him at all. I did my best to just be a piece of furniture in the room (which made me feel a teensy bit guilty because it meant that I just sat there and didn't play with any of the kids or help clean up toys or pass out snacks or anything...but, like...you gotta do what you gotta do) and urged him to instead rely on his peers and leaders.

"These are our friends!" I told him. "Grab a car and play with your friends. You know Kate. You know Winston. You know Bruce. They're all friends."

Alexander bravely selected a car and stood by me.

"Well, this is just boring," I told him. "Look at how much fun your friends are having playing on the car mat! Can you drive your car with them? Mommy will stay right here."

Alexander went over and started driving his car on the mat, too. And he had a good time doing it, too. Every now and then he'd look up at me and would act like maybe he was planning on bolting across the room to me, so I'd signal to him to "stay" and then give him a big smile and thumbs up. He played the whole play time and when they were called for snacks he got very excited and ran over to me (probably because he didn't know what to do because he's never stayed in nursery long enough to really figure anything out because he's too busy having panic attacks).

"I don't have any snacks," I shrugged.

So he boldly ran over to the one of the nursery leaders who'd been trying to gain his trust and he pulled on her skirt.

The other kids had found their snacks at their seats, so she guided Alexander over there and he climbed up onto a chair and happily tucked into his snacks. 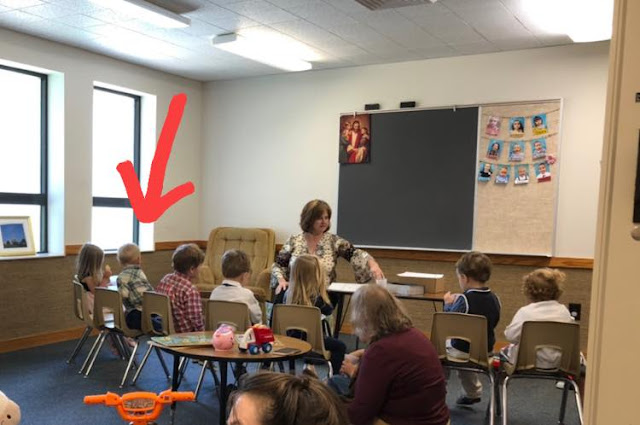 The nursery leaders wasted no time in getting to the lesson (doing it during snack time is a great idea because the kids are pretty dedicated to sitting down when snacks are on the line) and Alexander made sure he got his turn to pick a picture out of the box (they had a box full of pictures of things we can be grateful to Heavenly Father for).

And then it was music time!

He looked over to me when this transition was taking place (probably because a special music teacher comes in and that person hadn't been in the room before—so, panic!), but I smiled and nodded and he stayed at his chair and did the actions to some fun little songs. He only came over to me when they started some more dance-like songs, so I danced a bit with the kids then. Overall it was a good nursery day; a real breakthrough.

While we were still engaged in singing time, Zoë came flying into the nursery.

"Bwo-Bwo!" Alexander cheered, running over to give her a big hug.

"Yeah, I guess," one of the nursery leaders said. "I was just refilling my water bottle and saw her zooming through the hall and thought, 'Hey! I know who she belongs to!' Don't know why she was roving the halls alone."

"Because we're all done!" Zoë repeated.

I knew she'd had at least one substitute in her class that day so even though it wasn't quite time to be finished I just believed Zoë when she said her class was over (usually they hold onto the Sunbeams until parents pick them up).

So Zoë had a blast singing and dancing with the nursery kids (not too far out of nursery herself, Zoë's little BFF is still in nursery) and then we said a closing prayer and went to the chapel to get ready for choir practice. One of the counselors from the primary rushed in and said, "Oh, you've got her. Okay. Just so you know we didn't just leave her to roam the halls. She kind of escaped. But you've got each other so it's all good."

And I was like, "Yeah. Thanks..." because I had no idea what she was talking about.

But Zoë's teacher (not the one who got the substitute for the day, but the other one) came bustling into choir practice all out of breath and looking rather frazzled—but also seemed quite relieved to see Zoë clowning around under the watchful eye of her parents.

"Okay, so...I don't know what happened. Zoë got glue on her fingers and wanted to wash them off," she began.

"Sounds like Zoë," I said (because she hates messy fingers).

"Sister So-and-So was helping in the class today so she took Zoë and a couple other kids to wash their hands and Zoë just ran off. I don't think she was being naughty. I think she just thought that we were finished with class time. But we've spent the past ten minutes frantically searching for her. I figured she had run off to nursery because I know she likes to play in there during choir, but by the time I got there she was gone and..."

I apologized because I had had no idea that there had been a building-wide search for my child (who had been safe with me the entire time) and assured her teacher that I. Have. Been. There.

On more than one occasion.

"They're slippery little things!" her chuckled.

So I suppose my list of Sunbeams I've lost is up to five now (though technically I didn't do the losing this last time)...