Between orchestra, a quick stop at the playground, and general unruliness, we only got about half a day's schoolwork in (which is fine because I am considered the "superintendent, principal, teacher" of my school, according to Georgia law, and can declare that Saturday's field trip also counted as a half day of school (even though the trip was much longer than a full day of school...I'm not sure we were learning that whole time) so between Saturday and today we're right on track), not that we couldn't have just taken a break since technically it should have been our fall break.

Anyway, it was kind of a frustrating day...which then perhaps even merited a break...but it was the kind of frustrating day where taking five children out in public seemed too intimidating a task.

Benjamin and Zoë could not stop fighting with each other (screaming in the backseat all the way to orchestra, screaming and fighting during orchestra, fighting at the playground, fighting at home...). It was awful.

And then I didn't even know where to take them if I had wanted to take them anywhere (besides orchestra and the playground). The library was closed and I honestly have no idea where else to go with five children and no backup (that falls within our budget of "mostly free"), anyway.

So we stayed home and did some work together and played a bit together but mostly, I think, drove each other crazy. There were some good times, too—some dancing in the kitchen while we fixed up some Thanksgiving dinner, round one for us Canadian-Americans.

By the way, I don't know why Americans feel such ownership over Thanksgiving; they have no problem sharing Halloween and Christmas and other holidays but Thanksgiving is something they have always felt the need to gloat to me about, thinking that they somehow invented the holiday (but they did not; it's a tradition much older than the founding of this country and draws on traditions from many cultures including ones indigenous to this continent as well as from various European cultures). In fact, National Geographic clarified this year that Canada actually "[beat] the United States to the pumpkin pie," celebrating their first Thanksgiving in 1578 (versus 1621 for the US).

It's honestly not something we need to be fighting over, children (because neither Canada nor the US came up with the idea of a thanksgiving feast—it was very much "in the air," so to speak—so it's very natural that both countries would develop a tradition surrounding a thanksgiving feast). So neither country copied the other; rather their traditions blossomed in tandem.

All that history (which we discussed round the table) aside, here's our little Thanksgiving spread: 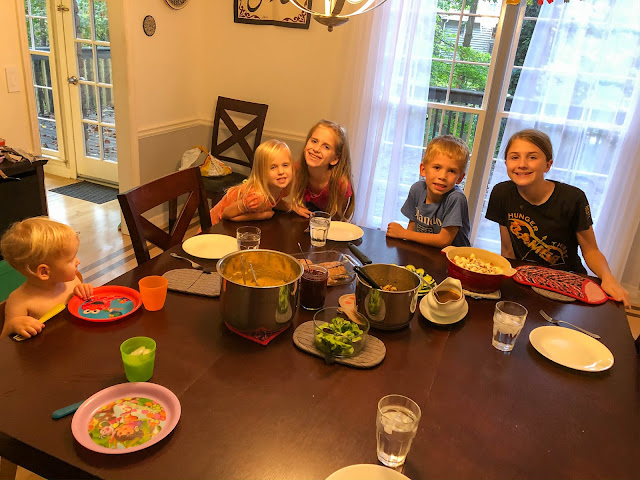 We had turkey (just a little cut of turkey, not a whole thing (and this year I didn't cook it until it was turkey leather, so already our feast was looking pretty good)), mashed potatoes, stuffing, sweet potatoes, gravy, broccoli, cucumbers, and Hawaiian rolls. Oh, and pie! Rachel (and Andrew, since he made pie crust yesterday afternoon) helped me make this beauty: 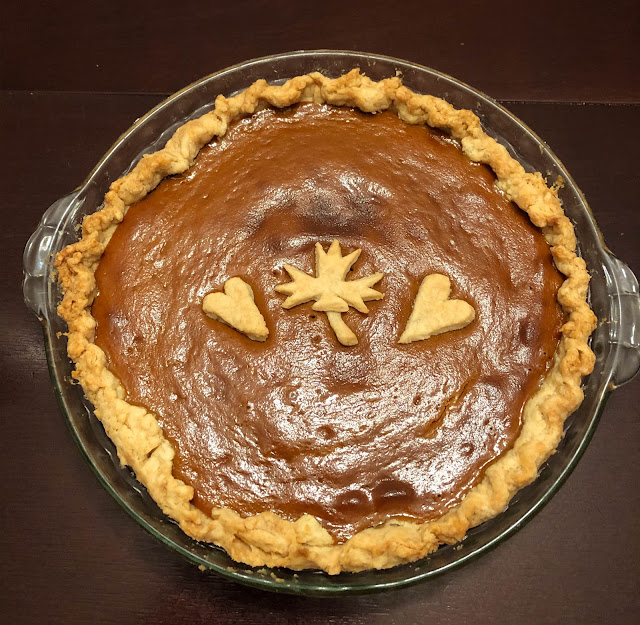 For Family Night I...lost my temper with the children after the three littlest ones shredded my last nerve of patience. They simply wouldn't listen to anything, which meant I had to use my stern voice to tell Alexander, "No!" when he was mistreating one of our ukuleles, which meant that he cried, which meant that—because my patience was fried—I carried him up to his room to have his cry there, away from the wreckage of my nerves.

But when I got to Alexander's room, I found that it was a disaster, which was funny because Miriam had cleaned it very nicely earlier in the afternoon (when she was on a sobbing quest to find her mask for her Halloween costume (meaning she was sobbing as she roamed the house looking for it and I gave her a task to distract her because she was driving me crazy)) and though I knew Benjamin and Zoë had gone in there to "play blizzard" (I'll let you imagine what that game entails (hint: lots of toy throwing)), I had assigned Benjamin the task of cleaning it up while Zoë and I tackled their bedroom (which had also been hit by the blizzard).

It was a monumental task, but I kept popping in on him and urging him to "pick up ten more toys" and so forth. Anyway, I left him and Zoë to finish cleaning their respective rooms while I did something else and they both reported to me that they had finished when they joined us all in the living room for family night, but—lo!—when I went to deposit Alexander in his bedroom his room was even worse than before, which meant that instead of cleaning it those two had been (literally) messing around...again.

And we won't even mention the number they pulled in the basement.

Like, I don't even know how those two managed to create as much chaos as they did in one afternoon while I was doing my best to manage all their mischief.

So, I, uh, lost it on them. I gave them a long, loud lecture, and then sent them off to clean those bedrooms while the girls and I read Philippians silently to ourselves (yay, family night)!

Benjamin and Zoë came back downstairs, sniffling, several minutes later. I asked them if the rooms were now acceptable and they assured me they were. And then we dove into Philippians 2:12 (obeying when your leader is absent, which Rachel pointed out was an entirely petty point to drive home—but it also happened to be right there in our "assigned" reading for this week).

We finished off the evening playing our ukuleles and singing some Thanksgiving songs and then, finally, having pie with Andrew when he got home.

A bit of a wild ride, today, but I suppose that means the bar for tomorrow will just be...super low. It's pretty easy to have a good day when you're coming off of a lousy one!
Posted by Nancy at 12:16 AM