Even though our doctor's office has a two-child-per-visit policy, the doctor and I agreed that it's just plain silly to have my five children split between three appointments so in the future we can split the children into two groups (a group of 3 and a group of 2) for their well-child checks. Thank goodness! I am getting sick of going to the doctor already and we're not even finished yet!

Today Alexander had his check up.

He had to be weighed and measured like an infant because he couldn't stand on the scale. Poor dear.

He's growing just fine. He was 33.25 inches long and 24 lbs 11.6 ounces. He's all but grown out his laryngomalacia (we only ever hear it now when he's overexcited about things) and is perfectly healthy...except for that foot of his.

The doctor looked at it and since there was no obvious bruising or swelling and since Alexander didn't seem to react strongly when his leg was probed that it probably wasn't broken, but we have "orders" for an x-ray tomorrow should he still not be walking.

This non-break is starting to get really expensive...

After the doctor left, the nurse came back to check Alexander's hemoglobin levels and administer his flu shot. The kids were all worried that he was going to scream—because that would be a normal reaction—and covered their ears to shield their tender aural canals from his mighty and powerful lungs. Benjamin even stepped into the hallway.

But Alexander hardly even winced.

When the nurse pricked his toe (to collect a blood sample), he grimaced and buried his face into my arms. When the nurse jabbed him with the needle, he winced, but didn't scream or cry at all.


That reaction, in conjunction with his inability to put weight on his foot, worries me. The nurse called it bravery. I have a feeling it was stoicism.

He's been dealing (rather well, I might add) with so much pain that a little poke with a needle was nothing. Why cry about that when his foot hurts so badly he can't even walk?

If he had a broken bone, I've been told by more than one doctor now, he'd let us know. He wouldn't be able to have fun or be still. He'd be fussing and writhing in agony.

But I'm not so sure about that.

I mean, after he broke his arm (guys—two broken bones in a year?!?! (potentially; this one isn't an official break yet, but still—how awful is that?!)) it's true that he took a while to calm down. But he did calm down. And then I wasn't sure if I should take him in or not...but I did...and they found the break right away (though they didn't think that there would be one because he seemed "fine" and his arm wasn't swollen or bruised).

He wants to cuddle (a lot), he refuses to walk or stand, he's quieter than usual.

Last night I heard him get up to find me so I went to meet him (because I knew getting off his bed and finding his way to my room was going to be hard for him). When I opened my bedroom door he had just made it to his own doorway...army crawling.

He was dragging himself across the floor, softly crying, "Momma! Momma!"

If that's not the most pathetic thing in the world, I'd like to know what is!

When I ask him if he can walk he always answers, "No. Tarry me!" but is also getting very comfortable with crawling again. We went to the park during Benjamin's soccer practice, but instead of staying to play at the school playground (as we have the last couple of weeks, and which I'm sure is technically against the rules), we went to a nearby city park because I knew they'd have baby swings and I needed something Alexander could do. 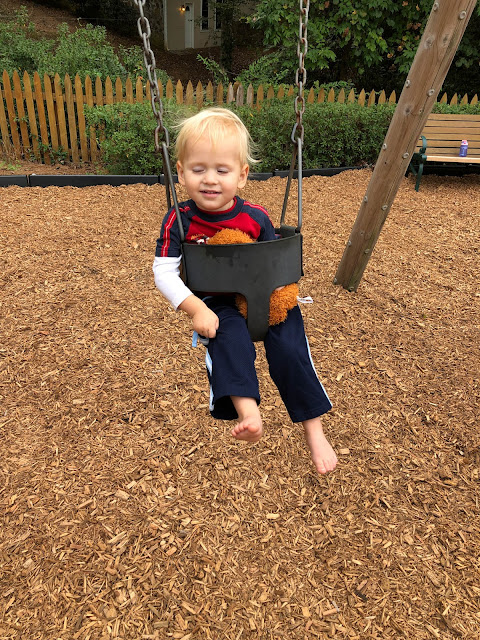 But, as it turns out, even he has his limits. He sat in the swing for a long time, but couldn't quite make it the entire hour. He asked to get out and play, so I got him out and asked him what his plan was. He squirmed to get down so I put him on the ground and he crawled over to the springy cars to take one for a drive.

Then he wanted help getting on the seesaw—"Over 'ere! Mommy, tarry me!"—so I helped him on the seesaw (the video below is for the Alexander giggle, which is still babyish and adorable).

Then Zoë started climbing up the big play structure and he wanted to do that, too. 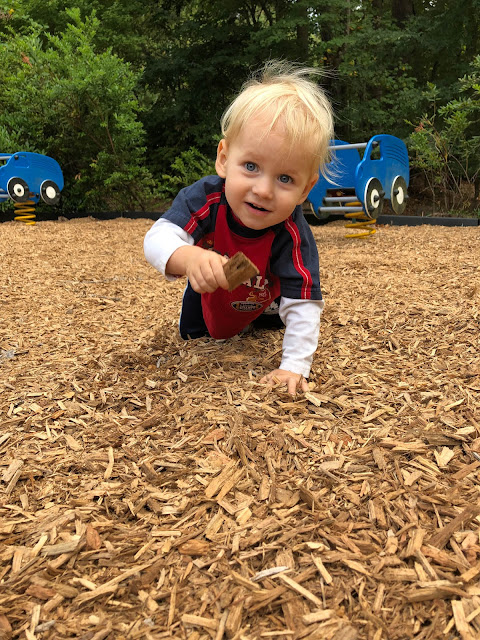 But he did it. He heaved his little body up the big platform stairs triumphantly.

I stopped him at the little footbridge leading to the tallest tower. It's less of a footbridge and more of a...balance beam...I guess. At any rate, it's not really something you can crawl across, but something you have to step across, using the handrail to help you keep your balance.

"I don't think so," I said, putting out my hand to stop him. "I just don't see how you could possibly get across this bridge in your condition, and I'm not going to put you on the top platform because I can't reach up there. So what are you going to do?"

"Ummmm..." he thought, looking a little disappointed. Then his face lit up and he said, "Ubby 'ide!" and crawled as fast as he could to the "other slide," which was just behind him. He went down headfirst and then tumbled out the bottom of the slide and proceeded to haul his little self up those great big steps again.

But once we got home he was clingy and sad again and still hasn't put any weight on his foot. And we think that maybe his heel is swollen now.