Rachel is out of school for fall break but Andrew doesn't have any sort of fall break so we decided to keep on homeschooling through fall break to save our vacation days for later. Besides, we enjoy learning because it's fun. What else would we do with our time off if not keep learning?

My friend Julia posted an article about a new monument of sorts going up at the aquarium in Salt Lake (because she can see it from her house and doesn't like it, which I can understand because it's kind of strange (though in the aquarium's defense, the view from the aquarium is much more aesthetically pleasing than the view from my friend's house)) that said their motivation for the monument was to help get people into a state of awe because, "studies show that when people are in a position of awe or wonder, they’re more open to learning."

The study itself says that "Awe experiences are self-transcendent. They shift our attention away from ourselves, make us feel like we are part of something greater than ourselves, and make us more generous toward others."

People who often seem to experience awe also tend to have an "appreciation of beauty, gratitude, religiousness, creativity, and love of learning," though scientists don't quite understand the connection. Personally, I feel like awe is the appreciation of beauty, gratitude, religiousness, creativity, and learning. It's the rush you feel when you finally solve that tricky word problem in math (we worked through some doozies this morning, Miriam and I), it's being filled with wonder at the world around you, it's being dazzled by discovering something previously unknown, it's seeking enlightenment. All of that is awe (so that's the connection (there; I solved it)).

At home I'm hoping we can collect more days full of "awe" to keep our creativity, love of learning, and generosity thriving.

So, we started our day with a little game I quickly made up for the kids. I saw it somewhere online originally, (though now I'm not sure where) but the idea was for a spring activity, so the game board was a flower. I quickly made up these little ghost boards for the kids and we had fun practicing our addition facts together (Benjamin has been needing to practice these but he's not one for flashcards or rote memorization and needs to be tricked into practicing). 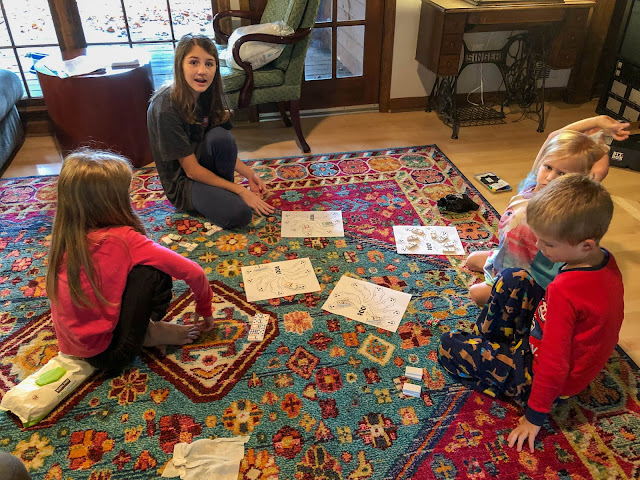 They put a domino on each ghost and then we rolled dice and if the dice numbers together equalled the dots of one of our dominoes we got to take that domino off the board. The first one to clear their board got to say "BOO!" 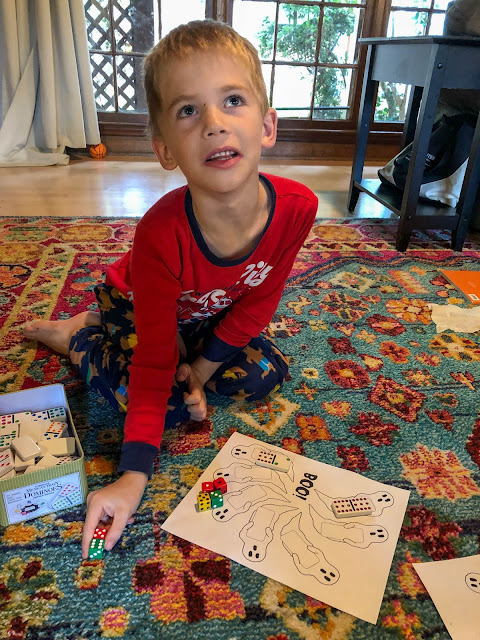 I let the kids choose how many dice they wanted to roll depending on how high of a number they were aiming for. If they were going for 22, as Benjamin was here, they would probably choose to roll several, but if they were only aiming for 3 then they'd likely only want to roll one or two.

Rachel, Benjamin, and Miriam pretty much played on their own (taking turns rolling and adding) and Zoë and I worked together on her board. Here she is trying to figure out if she has a domino with 7 dots: 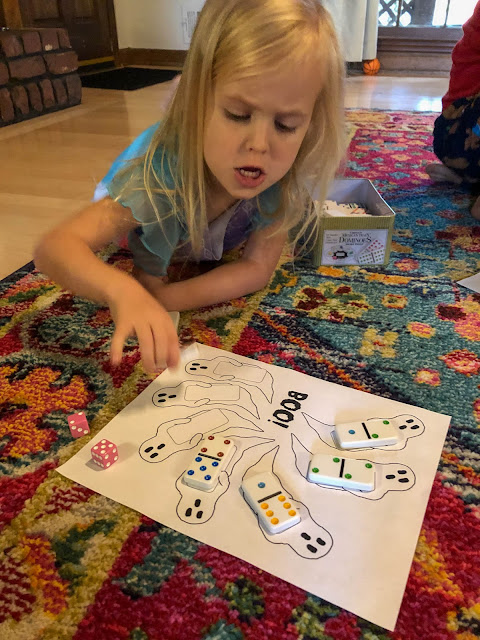 And here are a few more shots of the big kids: 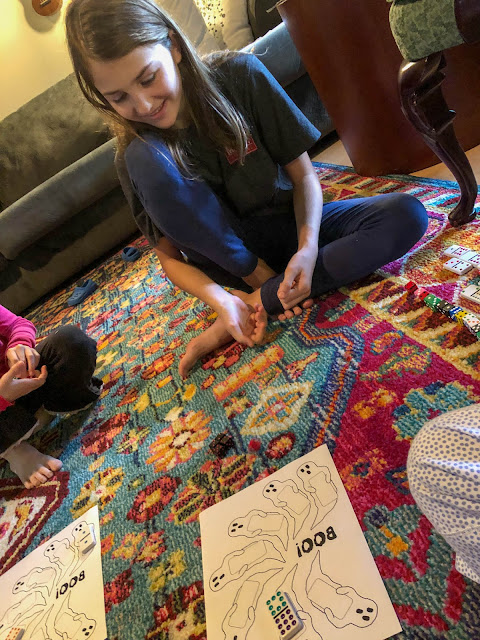 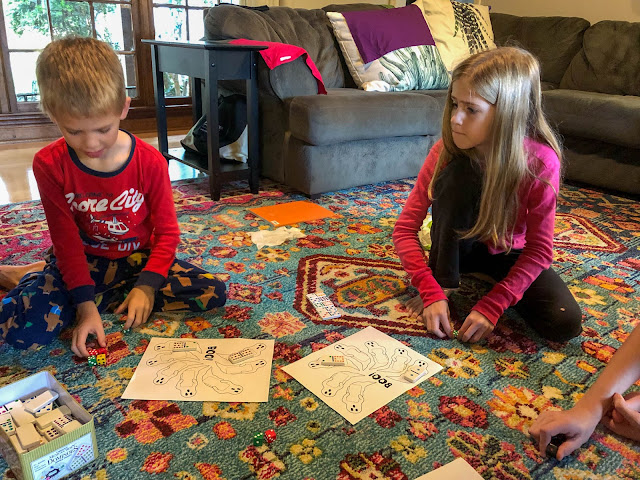 After some more formal schoolwork (doing their Singapore math curriculum and reading about our next two biomes in our science text) and some lunch we headed to the park to have some fun (and more schoolwork because I'm nothing if not a taskmaster).

For some reason we've never stopped by this particular recreation area until this week. We pass it frequently but didn't realize it had so many things to do. We mistakenly thought it was a few soccer fields and baseball diamonds (because the sign says "soccer complex")—and it is that, but also so much more. There are multiple playgrounds, a skate park, a roller rink (apparently roller hockey is a big thing down here—who knew?!), a pond, walking trails, and so forth. It's pretty awesome.

Here are some pictures of Benjamin Alexander climbing around the playground (while the bigger kids ran circles around him playing tag): 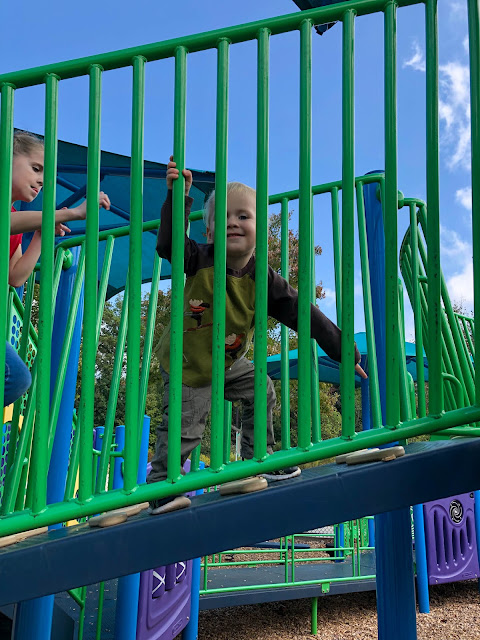 He's been pulling himself up to standing position today, so that's a good sign. I'm leaning toward "bad sprain" rather than "break." There's still no bruising but, like, obviously it's bad enough that he's still not walking days later so there's something amiss—but at least it seems to be getting better, not worse.

Here he is back to crawling again: 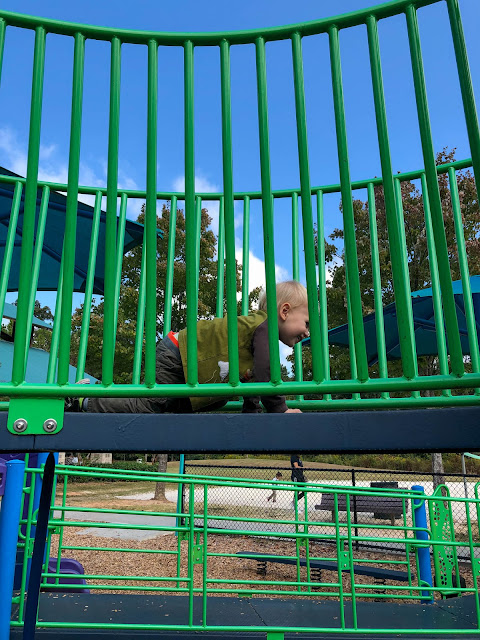 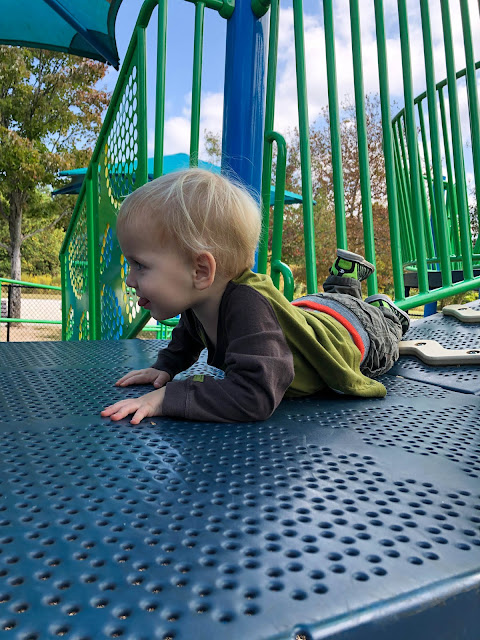 Part of our science lesson was use quadrants to calculate the height of a tree. But first I gave the kids a makeshift meter stick and told them to pick a tree to measure. Benjamin and Rachel were really excited about doing that but ultimately had to give up. Here's Rachel in a tree ready to take the meter stick from Benjamin: 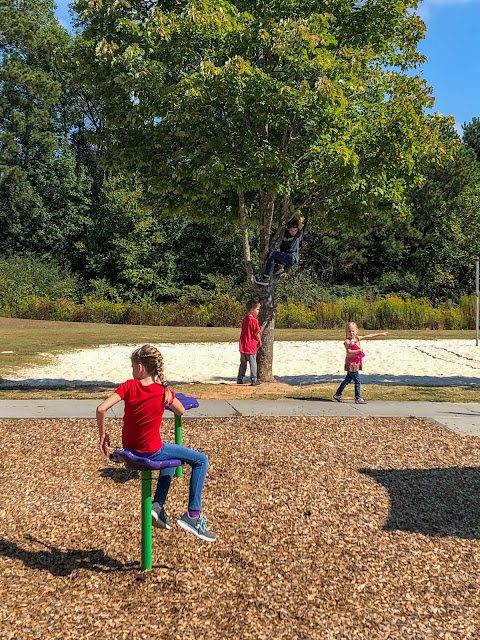 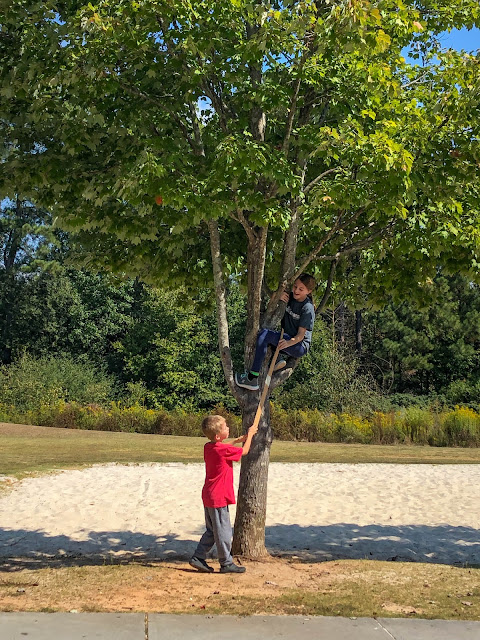 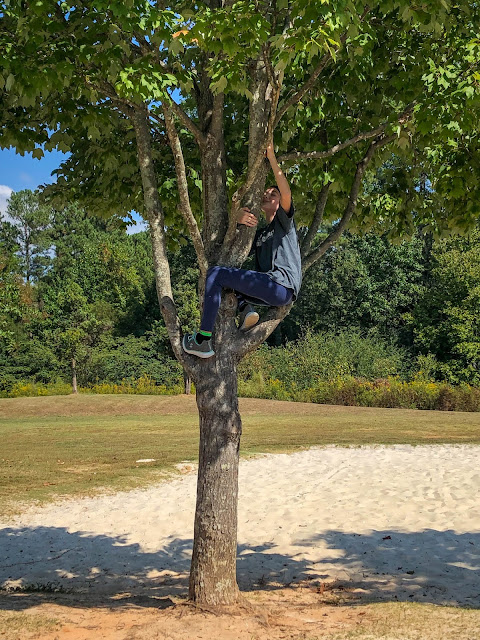 When the finally gave up, we talked about triangles and how if you have a 90-45-45 triangle, which Rachel rightly pointed out was an isosceles triangle, the two sides across from the 45° angles will be the same length (the very definition of an isosceles triangle). We then used this method to align ourselves with the tree to take our measurements (only we used a homemade meter stick and a whole bunch of sewing tape measures stretched end to end to make our measurements). 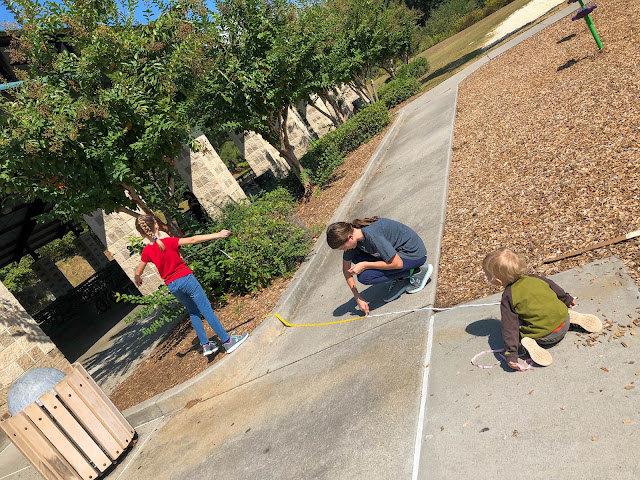 We drew some diagrams of our measurements and talked about triangles (how their angles always add up to 180°), and more specifically about 45-45-90 triangles and how knowing one length of the triangle can help us figure out the other lengths. It's all mathematically scientific.

We also talked about how tall trees grow in different biomes (deciduous vs. tropical forests, for example) and how much rainfall each biome gets. And then we took another (long) walk/scooter ride to another playground area. On the way we found this monarch: 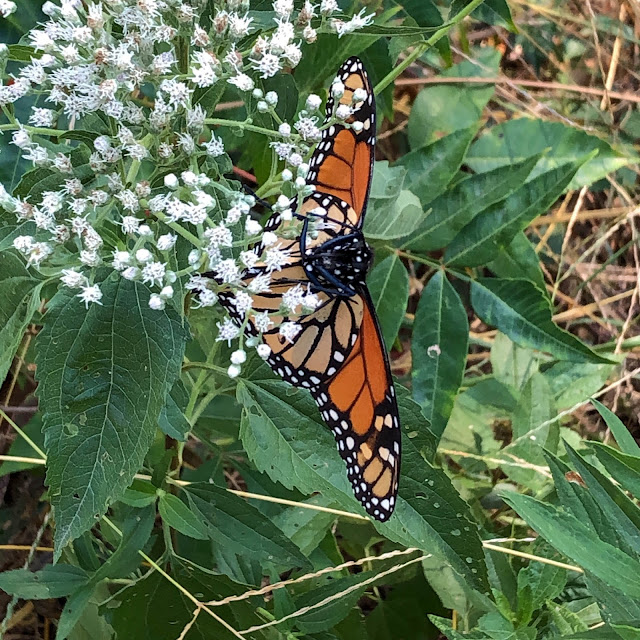 Once we were at the other playground we did some creative writing. Our prompt today came from a Freudian slip Miriam made in the morning when we were reading about biomes. Instead of saying "coniferous forest" she said "carnivorous forest," so I had the kids write a short (somewhat spooky) story about taking a walk through a carnivorous forest. 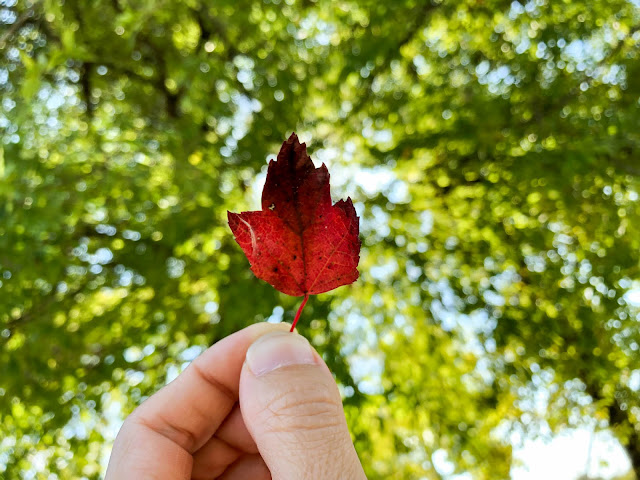 Miriam, being the dedicated pupil that she is, was able to sit in one spot and write her story: 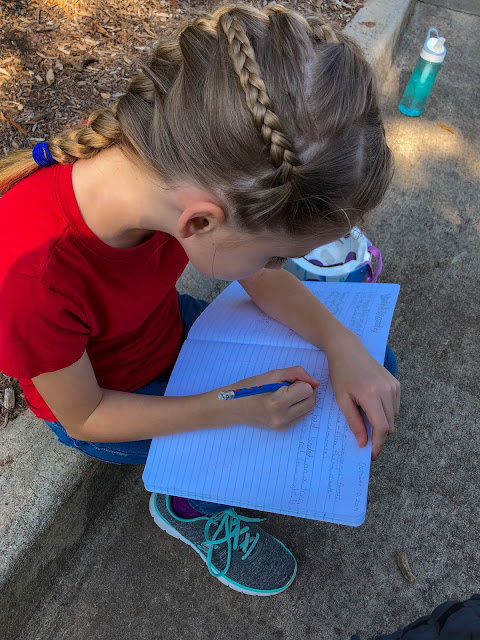 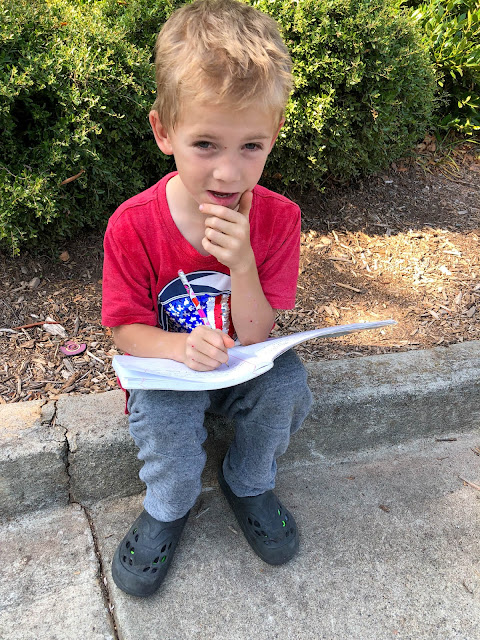 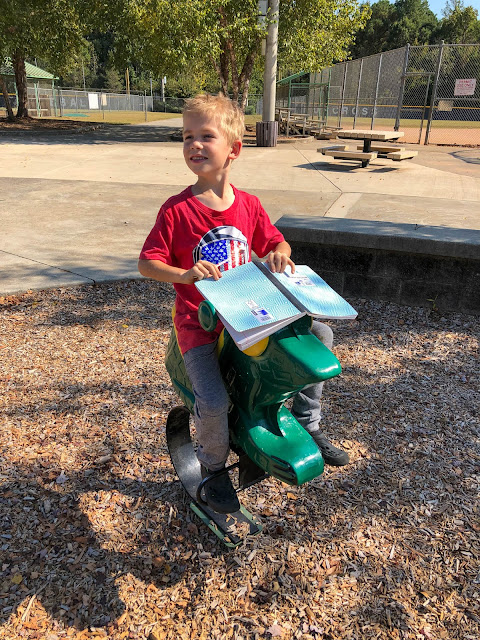 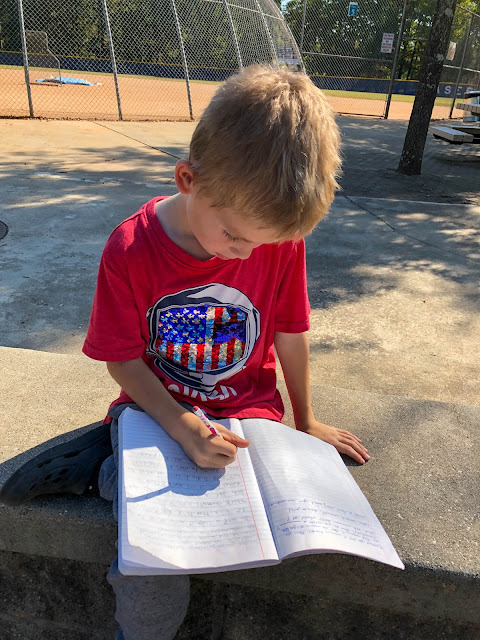 Here are the other kids playing around: 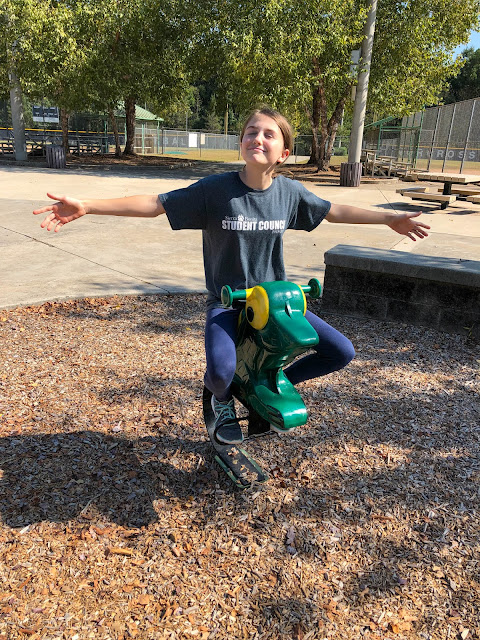 Alexander stood up by these drums for a minute: 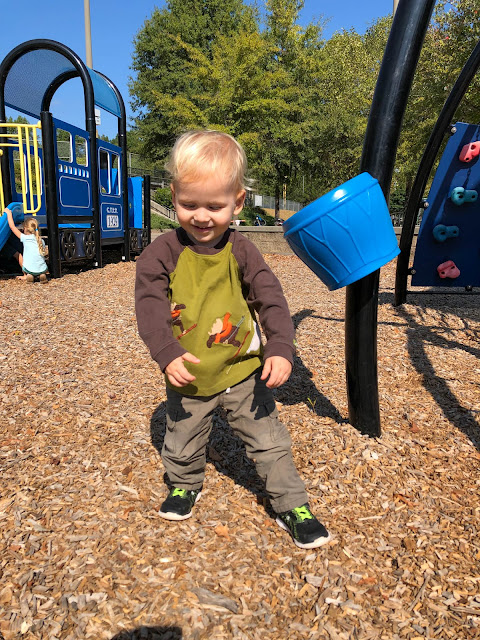 And he stood at the bottom of this ladder for a minute as well, pondering whether or not he could make it to the top (he ultimately decided that he wouldn't be able to and crawled over to the stairs) 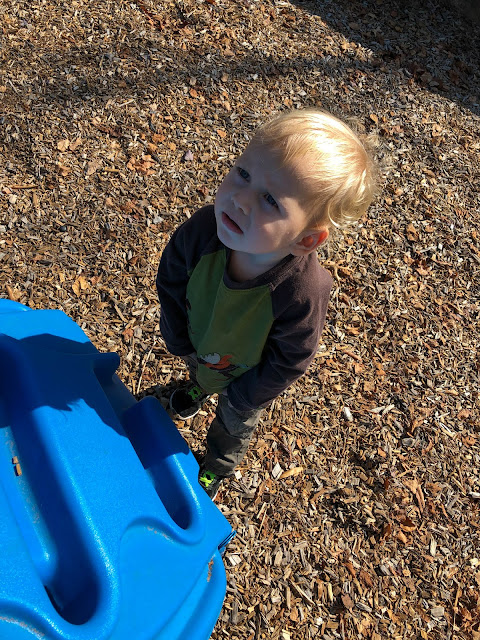 Here's Zoë at the top of this climbing wall: 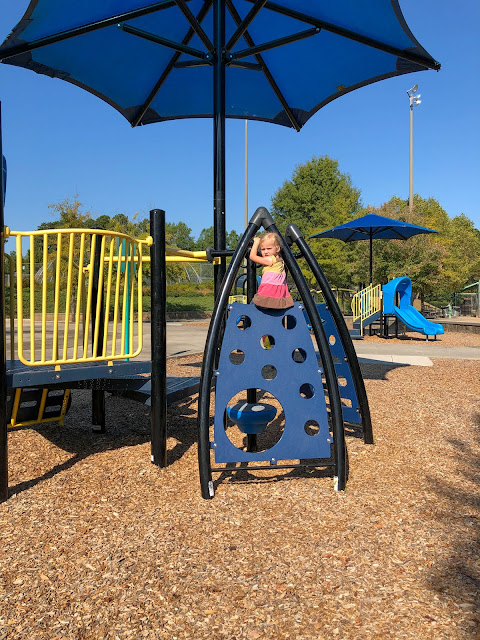 Sometimes I'm a good mom. Sometimes I am an...okay...mom.

After finishing our writing and playing tag, we decided it was time to head home (which meant a long walk/scooter ride back to the other park to fetch our car). Zoë wasn't quite feeling motivated enough to make it all the way back, so here she is moping on the pavement (that's Miriam in the background, riding back to check on us because we were being so slow): 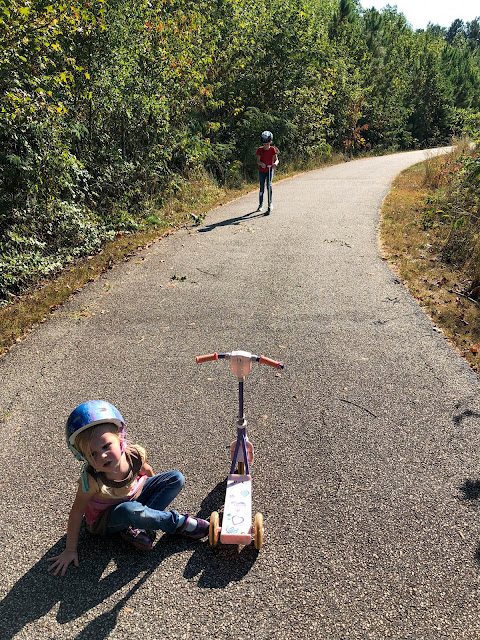