We played Bananagrams this afternoon, which is a game I haven't played in ages. The kids were able to come up with some pretty good words (sometimes by cheating—Miriam spent one round "fishing" in the draw pile and because every time you return one letter you have to take three she ended the game will a billion tiles still to play so that was kind of a lame round, but she learned her lesson (and she spelled doctorate, which is one of those pretty good words I was talking about, but still)).

One round Miriam spelled the word repetition. At the end of the round when we were proudly reading our words out loud (guys, I managed to spell penitentiary in one round (I should note: there is no benefit to creating the longest word, aside from bragging rights)) and Miriam said, "Okay! I got repetition, surf, boas, moat..." she continued through her list of words and then said, "And repetition! Did I say that word already?"

"Uhhh..." I said, waiting for her to figure out her unintended pun.

"Oh!" she said, and we both started laughing because that's funny.

Benjamin had a harder time with the game, but the beauty of it is that as long as you don't play too competitively players of many abilities can play—so Benjamin managed to come up with some pretty great words, too—zap, rifle, foxy—he used up some pretty tricky letters!

Even Zoë played! She didn't have to put her letters into crossword form; she just picked out words that she knew how to spell and made a list.

By the time Rachel came home from school, Benjamin was more than willing to bow out of playing anymore, so the girls and I played one more round before dinner. The most interesting word she came up with was xyr, a newly coined pronoun.

Here's Zoë with some of her legitimate words, trying to convince us all that GOBG is an acceptable way to spell garbage. Gooooooooo-bidge. Gobg. 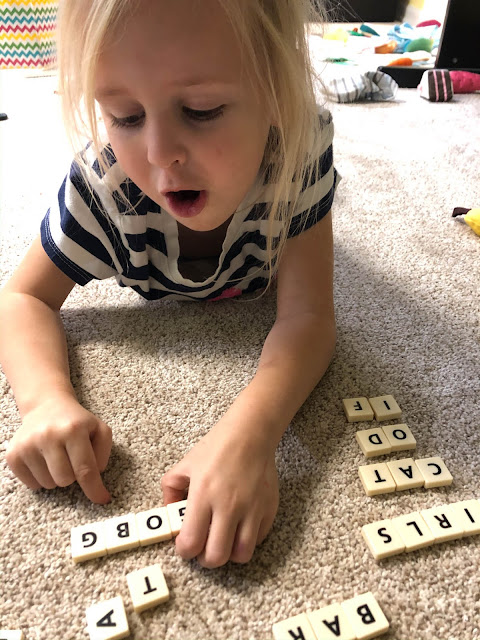 It was a fun way to finish the afternoon.
Posted by Nancy at 10:35 PM