Orchestra days are always a little chaotic, simply because it eats up such a large chunk of time from the middle of our day. We try to use that time effectively (read in the car! do math while we wait!) but it always ends up feeling like we don't quite get everything done. Today especially I felt pressed for time because in addition to orchestra I decided we should finally get around to doing a poppy craft.

We've more or less moved on from WWII (more because we have moved on to WWI (because why not do history backwards) and less because we just finished reading Sadako and the Thousand Paper Cranes and it turns out that the author took quite a few artistic liberties with this story that has forever been touted as historical, so we ordered a book authored by Sadako's brother to round out the matter in our minds (spoiler: Sadako totally managed to make 1000 cranes before she died)), so I decided that since Remembrance Day was coming up we should study WWI for a while.

The kids have been working on memorizing In Flanders Fields (which Benjamin wishes could be just a little bit happier in tone, but I was like, "No, dude. War is definitely this gloomy, so...sorry") and today we made some plastic canvas/needlepoint poppies to wear. It was certainly an exercise in patience for the kids (and for me as well, if we're being honest, since I was trying to guide the two older ones through their projects while allowing Zoë to pull the needle through the one I was working on, and kept having to stop to help everyone fix their mistakes), but be we made it through it!

First I had them enlarge the pattern—which, incidentally was an 11x11 square—on graph paper, so that totally counts as math (though we still did our regularly scheduled Singapore math as well). We talked about lines of symmetry and so forth. And then I let them loose with yarn and needles. They needed a ton of help when we first started out but by the time we were finishing up they were rethreading their needles like champions.

We ended up with five poppies: one made by Benjamin, one made by Miriam, and three made by me (with Zoë and Alexander taking turns pulling the needle through whenever they they could convince me they should have a turn).

Here they are wearing them just before I called them to attention for our moment of silence: 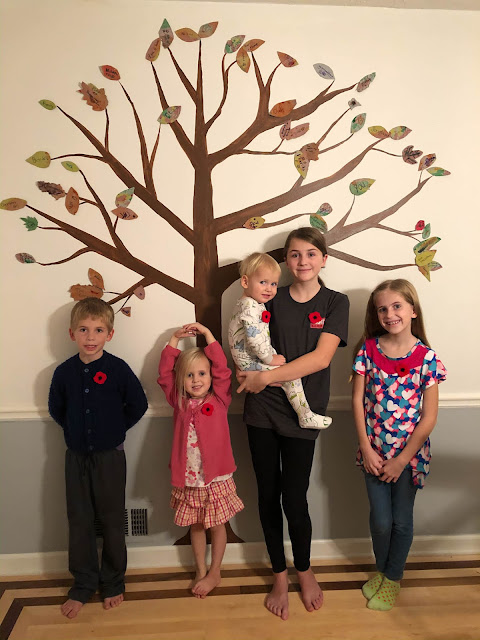 We waited until the evening so that Rachel could participate (and also because we were at orchestra at 11:00). Veteran's Day is not an observed holiday around here, apparently (and somewhat surprisingly).

For family night we talked about Peter Keyes, my great-grandmother's brother, who died from wounds sustained during the Argonne Forest offensive on September 28, 1918. By the time Peter enlisted in the army, the war was well underway (because the US had a habit of jumping into global conflicts quite late), my great-grandmother had already immigrated to Canada (and had had five Canadian-born children), and their parents had both already passed away.

Peter was 30 and had never been married and away he went to war saying, "Well here goes, if we never come back I guess it will be soon enough."

And he didn't come back, though I honestly couldn't say for sure when he died! According to the notice in the paper (the "Richfield Reaper"), his sister Ella (Eleanor) Keyes Gleave got a telegram from their brother, Junius Wilford Keyes, saying that Peter L. Keyes had "died of wounds received in action on November 9," and the headline makes a big deal that his death occured two days before the Armistice was signed.

(Our children, meanwhile, noted that he passed away exactly 100 years before our Grandma).

But I honestly don't know if she got that correct, considering what a hullabaloo the paper made over the November 9th date. I suppose we'll never know for certain.

Whatever the case, it was terribly sad for the family. My grandma noted in her history (or my aunt remarked that my grandma noted...this is getting to be rather he-said-she-said at this point) that it was difficult for her mother to send her son off to war (during WWII), having lost her brother during WWI. I imagine that that would be a very difficult thing to do.

The kids and I were talking about that over dinner—how during the "great" wars, civilians were called upon to sacrifice, to collect scrap metal, scrap rubber, and so forth for supplies for the military. Food was rationed. And on and on.

It's true that military families still feel the effects of war—with deployments and so forth—but the average civilian—on this side of the world, at any rate—mostly does not.

We're lucky we get to feel so much at peace (even though we're technically at war), though I'm not sure that's right. I'm not sure that we're able to think clearly about the wars being waged around the world for that very reason—we don't feel like it affects us. So maybe we should be called on to sacrifice something. I don't know.

I suppose at the very least we can be called on to remember. Lest we forget, lest we forget...
Posted by Nancy at 11:55 PM