Well, we made it through an entire year.

I don't really know what to say about it except that we're on the other side of it. It was hard at times and beautiful at others, and...we did it! And because we did it—because we survived (as people are wont to do in universal (but, oh, so difficult) situations like this)—today felt a bit like a sigh. Like an exhale. As if we'd been holding our breath for a year just to see if we could do it—and we could! And we did! And now we know we can keep going.

I was thinking about Karen a lot at Halloween, and maybe I sat on my steps and had a brief cry (while I ate some candy) while no trick-or-treaters were coming, thinking about how this was the very last first holiday to get through without her—the very first time she wouldn't ask to see pictures of the kids in their costumes.

But somehow we got through that last first and entered the first week of remembering Karen's last.

That was hard, too, but not in the way I expected.

Even now as I type, I'm feeling teary. But I don't feel broken. I'm sad because I miss her and I feel, in a sense, that we're missing out on her, but also I know that she's not missing out on us. I tried earlier to put this feeling into words and I'm not sure I quite nailed it (but that's alright because Grandpa tried to put it into words as well and it took him 32 pages or something like that).

Andrew stopped for doughnuts when he was out grocery shopping today and when he brought them in the kids were excited but confused—except for Rachel who knew what today was.

"Because a year ago today Grandpa took us out for doughnuts," Rachel recalled correctly.

"Oh, that's right! We went to Cowboy Donuts and got doughnuts because..." said Miriam, and then she fell somber. "Oh."

But, really, everyone was happy to have an excuse for a doughnut (thanks, Grandma) and we realized that we honestly don't feel that sad anymore. We feel...changed...but not really sad (though moments of grief are still unavoidable—the "Ball in the Box" analogy explains why this is so quite well and we've been coming back to it time and again over the past year).

Here we are with this year's doughnuts, feeling much more genuinely normal than last year (when we were feeling somewhat devastated): 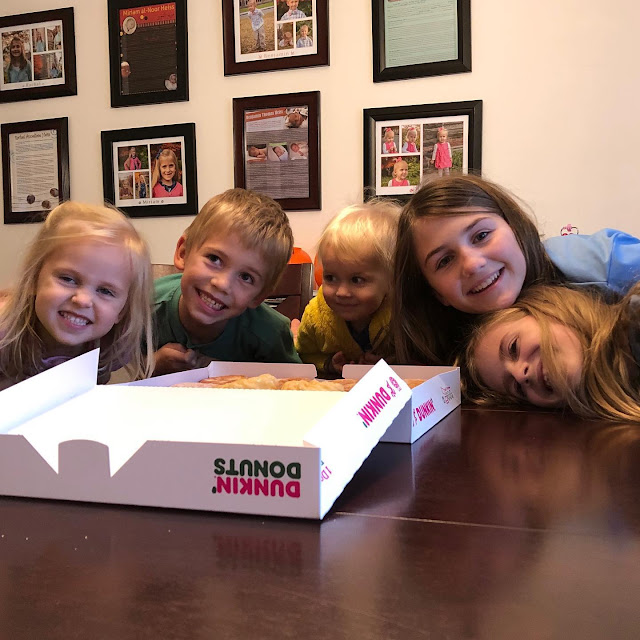 Most of the kids are unaware that it's been a year; to them it feels like Grandma died yesterday and forever ago. I think that’s how it feels for a lot of us, so perhaps we’re all transcending time with her a little bit. She’s now living beyond the concept of mortal time and so our memories/feelings of/for her are likewise not bound to a timeline. I feel at once like things have only just changed and that things have always been this way.

There's a finality to it, I suppose. I no longer feel like she's gone on a trip. I no longer expect her to walk through the door. I no longer count out a plate for her at dinner. I honestly can't say if that's due to my emotionally moving on or if it's due—literally—to the fact that we've physically moved and thus our entire household routine was upended and built up again without her being a part of it (just as we cut Grandpa out of our daily routine (sorry, Grandpa (note to any readers not in the know: he's still alive...we just don't live with him anymore)).

We do have moments when we wish we could call her or text her (we just built some shelves in our shoe closet, for example, and she would have been so proud of Andrew for using power tools, but we had to settle for texting Grandpa) and we do wish she could be here for as long as we wanted her to be her for (forever, probably) but that's not the way life works.

But while we don't have her physically here with us, we do feel like she's still perfectly involved in our lives. Well, not perfectly from our point of view, but perfectly as in...completely. We know that she's helping us to feel brave and loved and that she's there for every important part.

At least, that's what I believe. Eternity is a beautiful thing.

I don't know if that really expressed what I'm feeling. I'm not feeling very eloquent today (*cough*cough* (and that's not a sarcastic *cough*cough* either; I'm genuinely sick, okay?)) so I'll leave you with this poem I wrote a few months ago when the pain was a little fresher than it is today (I wrote it probably in February, so stop me if I've shared it before (just kidding—you can't stop me because I'm writing this before you'll read it)):

Phantom pains
Sometimes after I’ve removed my glasses,
I reach up to adjust them.

To find they’re not there.

Sometimes after a haircut,
I squirt out way too much shampoo.

For hair that’s not there.

Sometimes after you’re gone,
I pull a plate out of the cupboard for you.

But you’re not here.

I’m not forgetful;
I remember too well.

I'm not sure that's how I'm feeling about Karen today. After all, as I mentioned, we live in our own house now and so our grandparents aren't factoring into our plate count. But I know that even in the Spanish Fork house...I adjusted. It was already getting better day by day back then.

Somehow, almost imperceptibly, the seemingly never-ending feelings of utter devastation gave way to moments of joy, as if there was a break in the fog and a ray of sunshine filtered in for one brief moment. Then, little by little, the fog began to lift and now we've got clear skies and sunshine most of the time and life feels normal (aside from cloudy days or surprise downpours). So I can say with confidence (a whole lot more confidence than I had last year):

We're going to survive this.

(And may we be, as my dear friend Tamsin said in a wonderful note to me, "kinder and gentler" people for it).
Posted by Nancy at 11:58 AM