After having a rough night on Friday night, Phoebe went to bed at her usual time on Saturday night.

Andrew texted me to say that she was hungry and sleepy. I put on my mask, washed my hands, and grabbed a squirt of hand sanitizer on my way out of the bedroom. Nursed her to sleep, returned to my...chambers.

Around 10:30 I heard her fussing, so I went in to feed her again—grabbing my mask, washing my hands, using hand sanitizer. I felt her head first to see whether she was running a fever.

Note to self: using your hand to check whether another person has a fever while you yourself have a fever is actually not that effective.

She felt fine to me!

But then I latched her on and her little mouth was hot! She was having trouble falling into a good suck-swallow-breathe pattern. Her little heart felt about ready to gallop away.

I quickly unsnapped her pyjamas—just grabbed an opening and tore that thing right off her. Pop, pop, pop, pop, pop! I ran to grab a thermometer—103°F! I texted Andrew to find her dosage for ibuprofen. He came up with a syringe full of medicine and then we discussed what to do with her.

Testing her would be difficult. Her little nostrils are teensy weensy. The test swab is, comparatively, quite large. We decided to presume her positive. So then...did I need to isolate from her any longer?

We entertained the idea of continuing to isolate—considering viral load and so forth—but ultimately decided she'd just room in with me. And a good thing, too. I think I nursed her for a grand total of seven hours last night!

She was feverish and miserable and if she wasn't latched on she was not happy!

Alexander, meanwhile, was asleep (or attempting to sleep) in his bed across the hall. He tested negative at dinner but was running a fever at bedtime so we knew his goose was cooked. He had a rough night.

He woke up crying because his room was too dark.

He woke up crying because he was lonely.

He woke up crying because his head was feeling awfully hot.

"Come here," I coaxed him from the big comfy chair where I was settle in with Phoebe.

He stood firmly at the doorway. Shook his head. "You're quarantining," he said.

"Come here," I coaxed again. "I want to feel your forehead."

He leaned away from me when I reached out to him.

"Sweet boy," I said. "You're already sick. Just let me feel your forehead. There. Yes, you're burning up."

"Just a figure of speech that means your head is awfully hot, like you said. Phoebe's burning up, too. Let's go get the fast thermometer from downstairs."

I opened the baby gate and the three of us trudged downstairs together to our little nursing station—supplied with COVID tests, a thermometer, a pulse-oximeter, ibuprofen, acetaminophen, "magic mouthwash" and things of that nature. I had a digital thermometer on my night stand, too, but it was one that takes several minutes to register a temperature and that's just too much work when the other thermometer takes a literal second to register a temperature.

We have this "no touch forehead thermometer wand," which I felt was somewhat pricey when we first bought it.

But now I'm eyeballing the more expensive one that can pair with your phone, like...ooooooh!

Because we used to have a thermometer that plugged into our phone. We had different profiles for each of the kids and it would record their temperatures and had a system for recording their symptoms and medications. It was great. 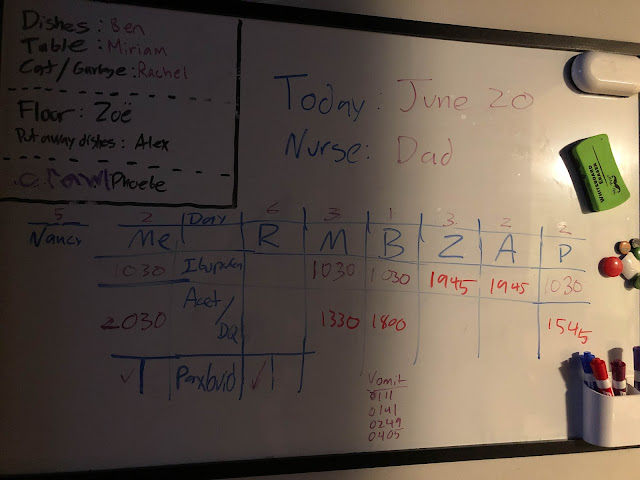 It's a bad picture, but that's because there are sleeping patients in the room the board is in and I didn't want to disturb them by taking this picture. Honestly, I should have erased "Dad" and put "Mom" because Dad was promoted to "ambulance driver" today and Mom was dragged from her sickbed to play "nurse" instead. But that's a different story. Right now we're at 4:00 in the morning on...Sunday.

I took Alexander's temperature. 102°F. Not too bad.

Here she is much later on Sunday morning, hugging the thermometer, which she always wants to eat rather than simply allow it to be aimed at her forehead, and showing off her 105°F temperature; this fancy thermometer keeps a log of the most recent 25 readings, so I scrolled back to capture the moment: 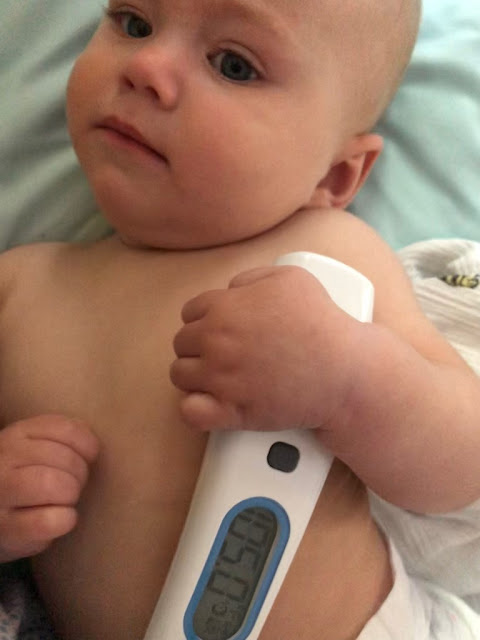 I know I woke Andrew up to help me dose the kids with ibuprofen.

I know I stripped Phoebe down naked again and turned a fan on her while we nursed and nursed and nursed. Luckily all she wanted to do was nurse. Nursing is a good sign! Had she not wanted to nurse we probably would have had to go in to the ER pretty fast. But she was all about consuming liquids. So I just sat and nursed her until morning, periodically aiming the thermometer at her forehead to see how her temperature was.

When we got there, I let myself doze off a little while she kept on nursing.

Andrew and Alexander both tested positive in the morning.

Alexander was angry at me for having sung him a lullaby the night before because he assumed I made him sick. He had a COVID test at dinner—it was negative. Mom sang him a lullaby—with a mask on, mind you, because we put him to bed with a fever...which we knew meant a positive test was imminent. The next morning he tests positive. Seems suspicious.

Here he is yelling at me, "Why did you have to sing me a lullaby? WHY?!! COVID lingers in the air, you know?!" 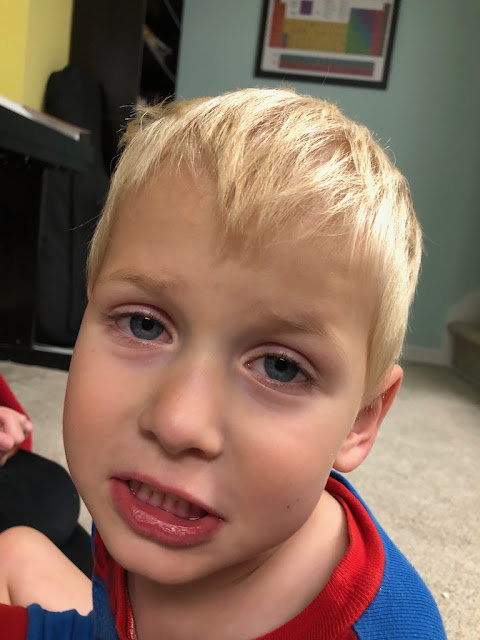 He's actually had a relatively easy time with it so far. Lucky kid.

Anyway, Andrew also tested positive (with very few symptoms, lucky guy) but made a telehealth appointment for himself so he could get on Paxlovid as well. The doctor he spoke with asked about me and Rachel (since we'd also had telehealth visits), as well as Phoebe (since my record shows that I'm a nursing mom). He mentioned Phoebe's 105°F temperature, which was concerning, but the doctor said as long as she's not maintaining that temperature, isn't terribly lethargic and is having plenty of wet diapers...she'd probably be fine. The biggest concern is dehydration.

The girl was drinking nonstop. She nursed all night and was clearly intent on nursing all day. Awake? Nursing. Asleep? Nursing.

I felt drained empty all day—in more than one way!—but she was completely full all day.

I kept her naked to help keep her temperature in check and also so that I could keep a watch out for the only thin blue line I cared to see—the one indicating her diaper was wet: 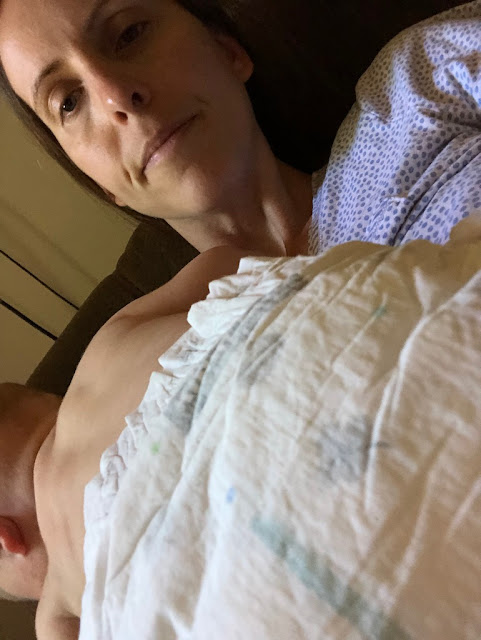 So, after a long, exhausting and scary night, Sunday day was...long and exhausting but a little less scary.

Alexander, Zoë, Miriam, and Rachel hung out in the basement. And buy "hung out" I mean that they watched shows on their individual devices, napped, and texted Andrew to ask for snack deliveries.

Phoebe and I hung out upstairs doing the same thing.

Benjamin and Andrew hung out on the main level. Andrew busied himself with checking everyone's temperature, measuring out doses of medicine, and delivering snacks. Benjamin did his best to stay the heck away from everyone, including spending much of the day outside in the shade playing video games (he and Andrew thought it was fun to pass snacks and water and things through the open window (because we've had our windows open and our A/C blasting this whole time) rather than using the door).

Unfortunately, by the time bedtime rolled around, Benjamin was running a low-grade fever and had a tickle in his throat...