It's hard to believe Benjamin has reached the double digits, the big one-oh, an entire decade. 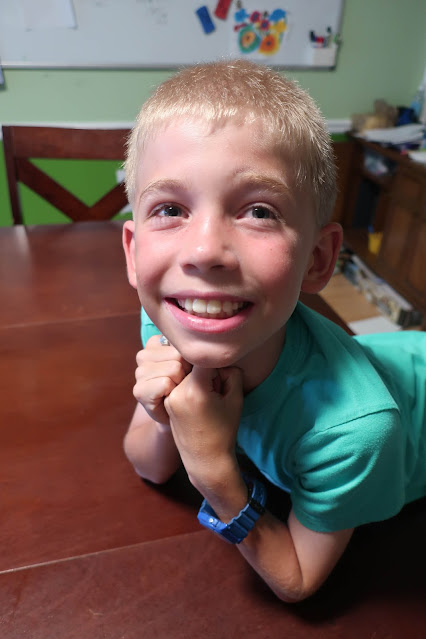 We went for a walk the other day, just Benjamin and me (and Phoebe, who is still somewhat an extension of myself) and had a lovely chat. We mused about how we've lived here in Georgia for three whole years now. He was seven when moved here—the same age that Zoë is now.

"The same age that Zoë is now?! Was I ever as annoying as her?"

"Guess so. Rachel says I'm still annoying but I think that I've matured. I'm probably 25% as annoying as I was three years ago, so I'm doing pretty good!"

He really has done a lot of growing up these past few years. In more than one way! He's almost up to my shoulder now and he's more mature.

Grandpa took him out for doughnuts this morning and they were gone for such a short amount of time that I hardly knew he was gone. I was feeding Phoebe when they left, so I finished feeding her, put her down for a nap, and went downstairs to check on the rest of the kids and...Benjamin was playing blocks with Zoë and Alex.

"I thought you went to get doughnuts with Grandpa!"

So true. When Zoë went on her doughnut date they were gone for about an hour!

While Andrew shopped for ingredients to make Benjamin's birthday dinner of choice—Molly's meatballs (from the Unofficial Harry Potter Cookbook) and potato and scallion rösti (from Recipes from the World of Tolkien) along with roasted carrots, cauliflower, and green beans (he seriously requested all of those vegetables...because my children are normal)—I tidied up a few things with the kids, folded a load of laundry with Benjamin, and then settled in to play a game with him (since Phoebe was taking a nap).

He bounces when he plays Nintendo. It doesn't really matter what game he plays—he's up and jumping all around the room. So because his older sisters' room is right below our entertainment room, they wandered upstairs to see if they could play, too. He happily suggested that they join in before they could even ask.

We played tennis and volleyball.

And then we played MarioKart.

And then I was like, "Okay, wow. Enough Nintendo. Anyone want to go to the pool?"

And just at that moment a couple friends from up the street dropped by to see if Benjamin could play and then before I could stop the words from tumbling out of my mouth I...invited the friends to come along to the pool with us.

Now, I'm pretty okay with my kids playing outside with others at this point in the pandemic. I could prevent that for a couple of weeks...turned into months...turned into years. But we are going on three years of this mess. We're playing with neighbourhood kids quite regularly now. And I think that's okay.

So the kids come back inside and Benjamin says, "That was so fun riding around with J. and his siblings! But I made sure to stay more than six feet away from them—I stayed more like seven—because they just had COVID!"

Which means that if their mom was wearing a mask, she's still in the isolation period...which...I mean...first of all, kudos for actually wearing a mask...but second of all, couldn't you have picked a different cul-de-sac when you saw my kids already riding around down there? Like...there's another one right beside ours...and only one kid lives on that one!

Anyway, whatever. I'm sure it's fine. We play with neighbours quite a bit these days. Always outside.

Until I realized that I'd have to put these extra kids in my car.

So we rode to the pool with all the windows in the van open. It was like a hurricane in there! But our air exchange was on point! And the kids had so much fun playing at the pool with their friends.

I say kids because Benjamin and Zoë are about the same age as this brother/sister pair from up the street. And I was so happy that they had a good time because Zoë was 100% convinced she was going to have a birthday party this year and that...didn't happen. She had even gone so far as to make handmade invitations for her friends.

I didn't know this until I was down in the basement to get something and then stopped to tidy up some crafting supplies that had gotten left out (this is always the case at our house) and I found a set of invitation, personalized for each invitee:

And my heart broke into a million pieces because it shouldn't be hard for me to plan a birthday party for my little princess before she doesn't even want a birthday party with a cutesy theme. And yet for some reason it is and I was a little bit broken about it. Almost started crying and everything.

But she got to have a little swimming playdate (and hurricane car ride) with a friend. So that sort of makes up for things, right? Sure.

Anyway, here's Benjamin checking out his cake, which Rachel made (of course). It's Bag End—Bilbo Baggins' Hobbit-hole): 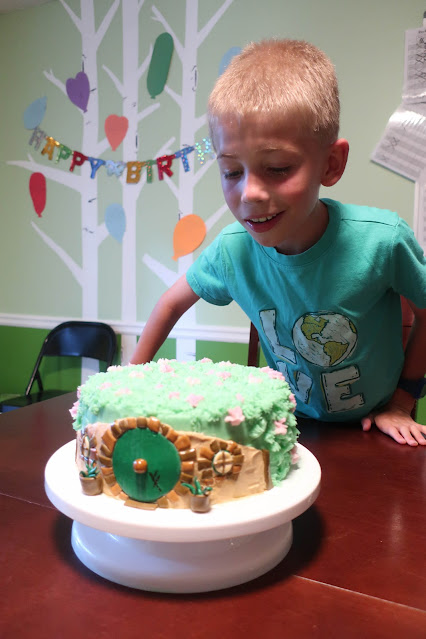 He was quite satisfied with how it turned out: 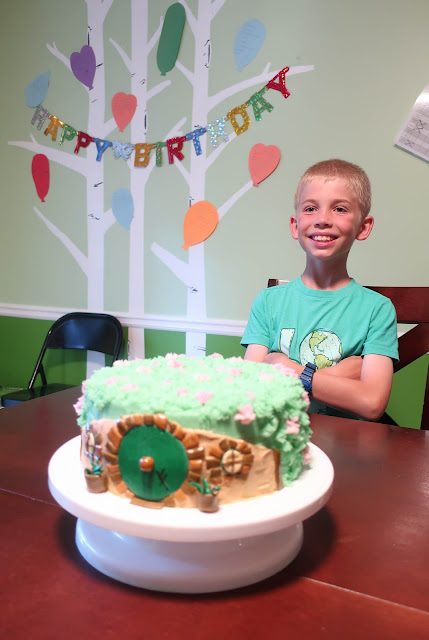 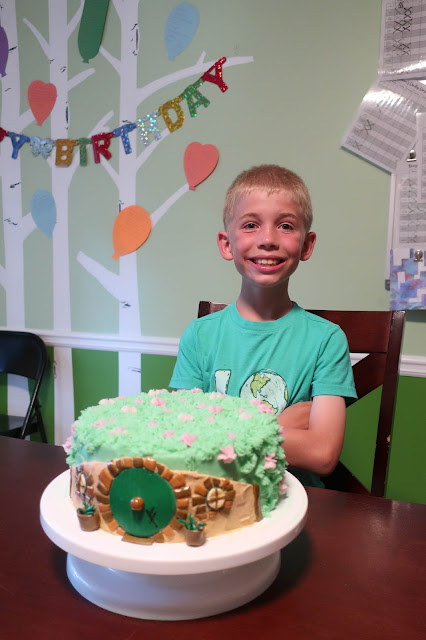 Here are a few pictures of the cake that I took before we opened presents: 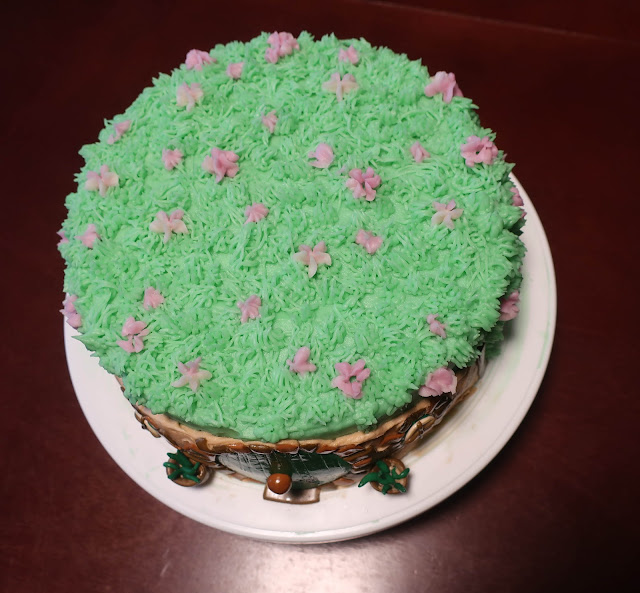 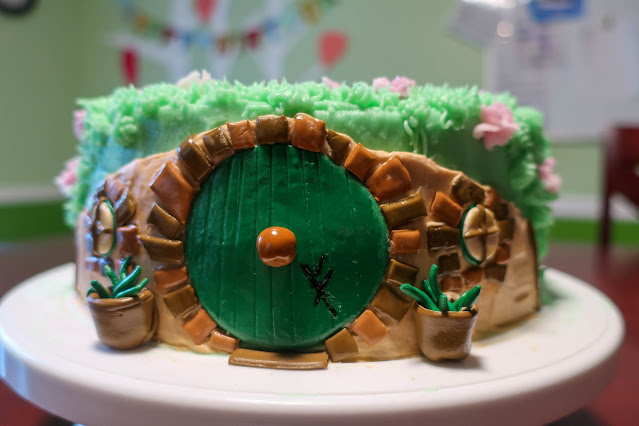 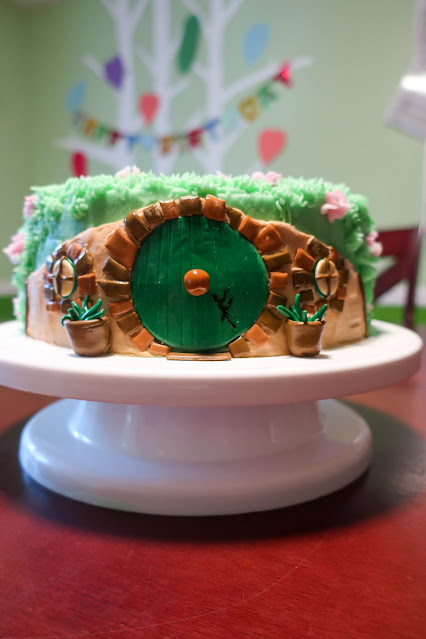 Rachel did a spectacular job, as always.

Benjamin was quite excited for his presents. He'd opened a couple earlier in the day—because I knew we'd gotten him some water squirters to use at the pool, and then because we were still waiting for our little friends to come back with their swimsuits, he opened a book my sister had sent (Rabbit Recipes for the Zombie Apocalypse), and then our little friends arrived so we grabbed the freshly-opened water squirters and left the rest of the presents to open later.

The gift my mom sent hadn't arrived yet, but it arrived just before dinner. Benjamin shook it and surmised that it must be a LEGO set (otherwise it was glass and completely shattered inside the box) and so he was quite excited to move on to presents. 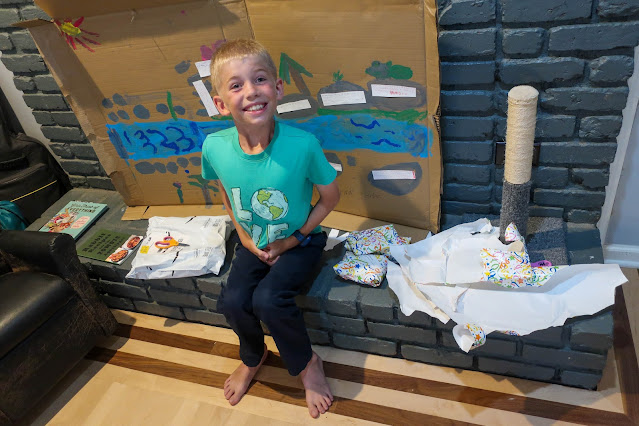 The LEGO set was just what he wanted (it came with four storm trooper figurines). Next he opened a faux coon skin cap from Auntie K, which was thrilling enough that he plopped it on his head and danced a jig around the room: 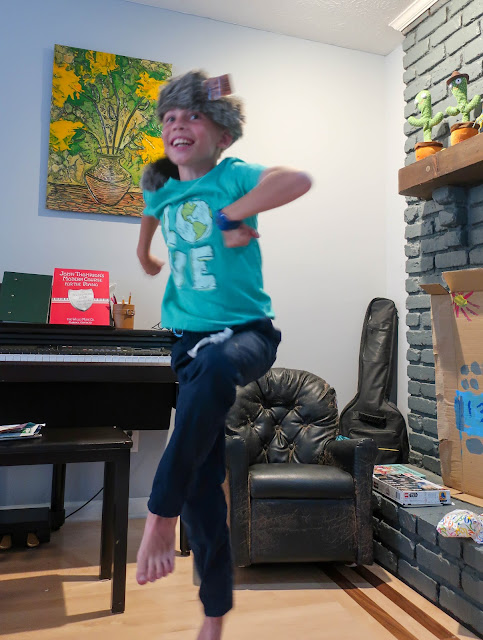 I probably should have been filming at that moment, rather than taking pictures, but I didn't know he was going to hop up and do that. It was pretty cute!

Here he is being serious: 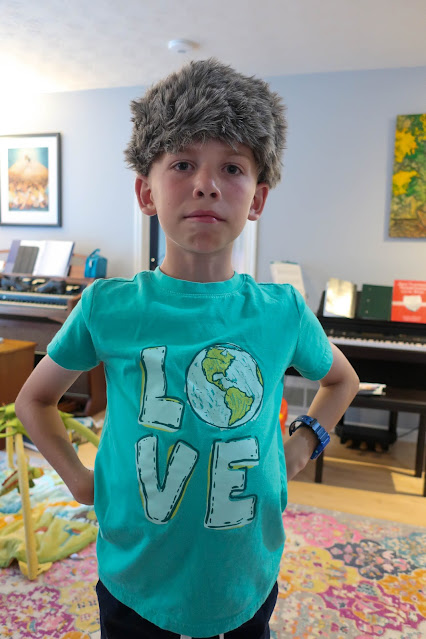 Miriam and I worked together to make a sash for Benjamin to keep his Junior Ranger badges on. I sewed the sash, Miriam did the embroidery. He's pretty excited to wear the sash with the hat with the new Junior Ranger t-shirt we got for him. 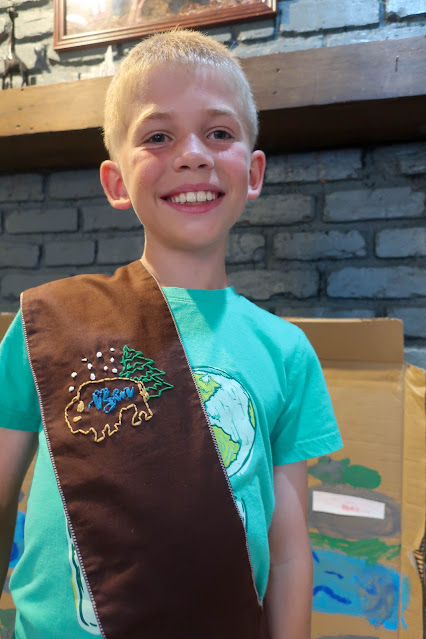 Next up was cake. Zoë and Alexander weren't as excited about cake because they got in trouble for complaining about their dinner rather than eating it. But they still got cake and ice cream, the little stinkers, so I don't know why they're so gloomy. Perhaps because at this moment they thought they didn't deserve cake. Who knows? 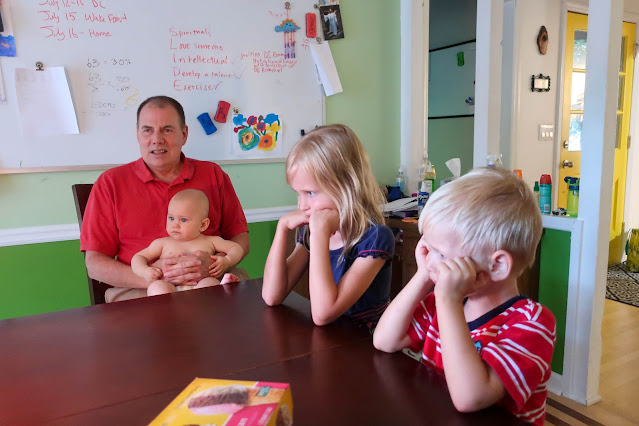 You can see in the bottom of the picture a box of Neapolitan ice cream, which has more to do with Napoli than Napoleon. Historically, Wikipedia tells me, the three ice creams that would be combined were green (pistachio or almond), white (vanilla), and red (cherry; and actually this was usually pink). This colour/flavour combination was used because they were the same colours as the Italian flag.

Chocolate, strawberry, and vanilla were commonly put together in the United States, however, because those were the three most popular flavours.

But really any flavours could go together and the dessert is just...multiple flavours of ice cream together.

I distinctly remember an ice cream that is pink, white, and green. I think it was more like cherry, vanilla, and lime. What was that called? Is it only a Canadian thing? Or do they do that down here, too?

Sometimes I can't remember these things. Tiger Tail (orange + licorice...it's yummy, trust me) I know is a Canadian thing. But I don't know about this other flavour combo.

Anyway, Wikipedia also tells me that Neapolitan ice cream is sometimes known as Harlequin ice cream (though I don't know why and their link to the reference is a dead link). I thought this was interesting because Alexander, who confused Neapolitan with Napoleon, and then confused Napoleon with Hercules (somehow?) kept calling it Hercules ice cream. And Hercules sounds suspiciously like Harlequin, so perhaps he's been reading Wikipedia behind my back.

Alexander got his Hercules ice cream (which he ate) and his cake (which he didn't).

Here's Benjamin getting ready to blow out his candles: 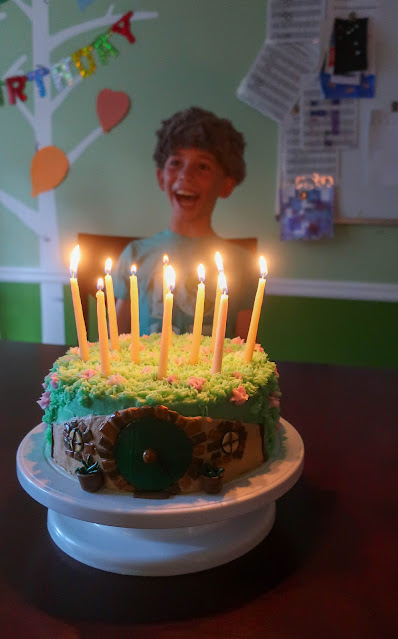 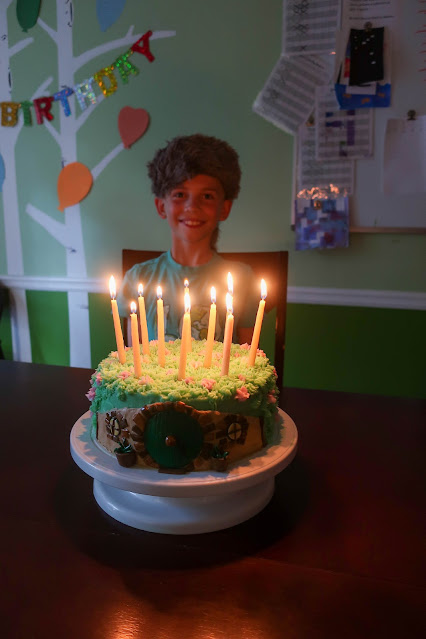 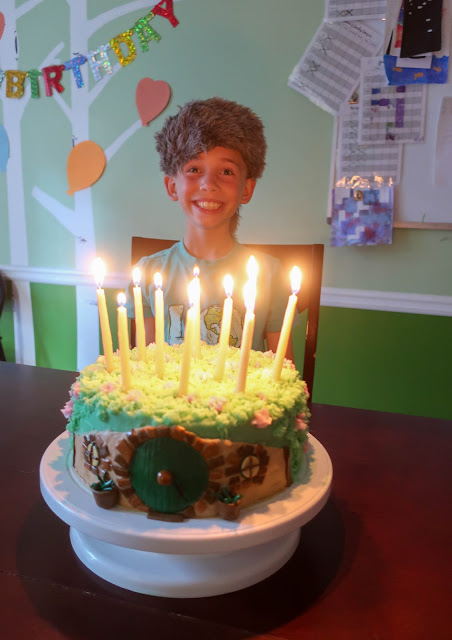 And here he is blowing them out. He's so old it took him two breaths to get the job done. 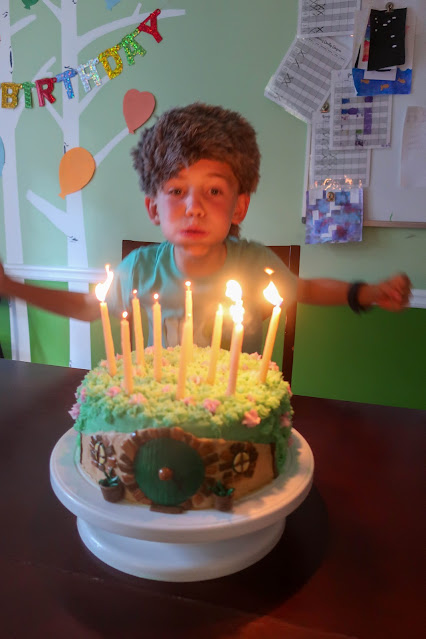 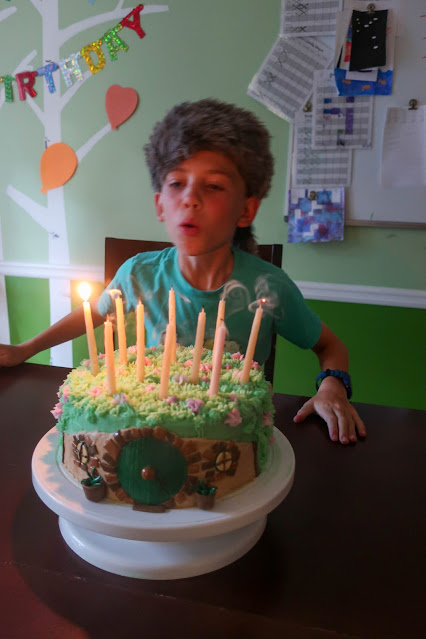 We had a wonderful time celebrating this boy!
Posted by Nancy at 1:58 AM