Until it came time to get on our jammies, today was the polar opposite of yesterday.

When it was time to get on our jammies, Alexander needed help unbuttoning his shirt, so Andrew called to him to come down the stairs for some help. Alexander had lifted his shirt up over his head (bottom up, so his belly was exposed and his head was covered because the button by his neck was still done up) but decided to make his way down the stairs anyway.

Andrew did, more or less. By the time Alexander reached a decent-but-still-make-sure-your-catcher-is-ready spot to jump from, he was already upside down. Andrew managed to prevent him from landing completely on his head and then they tumbled down the rest of the way together, landing on a heap at the bottom of the stairs and exacerbating Andrew's surgery site.

In the name of transparency, it was a vasectomy. Andrew's been hobbling around ever since. While his right side has healed without any problems, his left side is...having a hard time. This is ironic because he might not even have a left side. That's right—they couldn't even find his left vas deferens, which is actually why it's taking so long to heal. They were poking around trying to locate it for quite a while, so he's been rather sore and the incision site is a bit larger than the wound on the right side (it was supposed to be a "scalpel-free" surgery, but Andrew had a less-than-routine surgery).

When he was "out" of surgery (his dad drove him—thanks, Reid!) he texted me to say that he was only kind of finished because he has to go in again for either a second vasectomy (assuming they can find the left vas this time) and/or an ultrasound to count his kidneys because there's a chance that, if he's missing his left vas deferens he's also missing his left kidney.

We'll see what the case is in a couple of months. In the mean time, we hope Andrew's incision will heal up (something that would happen a lot quicker if his children would stop doing things like jumping off the stairs and landing on top of him).

Yesterday was quite the ride.

The kids spent most of the day outside, which was lovely...except for when it wasn't. While they were outside playing on the swing set, they got in a little argument over whose swing was whose. It was a ridiculous argument because there were three kids outside and there were three swings to be swung on. Zoë, however, wanted the middle swing and her little friend E kept touching it. So Zoë climbed to the top of the play set with the swing in hand—to keep it away from her friend. And then she accidentally (so I'm told) dropped it and it swung from that great height, gathering plenty of velocity, directly into Alexander's face.

We heard him crying, but it was Zoë who came into the house.

"Oh, hi!" she said, stumbling in through the back door. "I’m just coming inside because…ummm…I let go of my swing, and…ummmm…it hit…ummm…Alexander in the...ummm...face."

"Well…yeeeeeeah. I mean, his nose is bleeding a little bit but he’s fine. I’m just going to grab a Kleenex for him and…yeah…take care of that…so…bye."

And with that she slammed the door and darted down the deck stairs. A few minutes later, Alexander came stumbling into the house and it was very clear that a Kleenex was not going to solve this issue. He had blood running down his face and he'd been wiping his nose with his sleeves, so both sleeves were saturated with blood. He had a little goose egg on the side of his head (not sure how or why that ended up there) and was overall quite miserable. 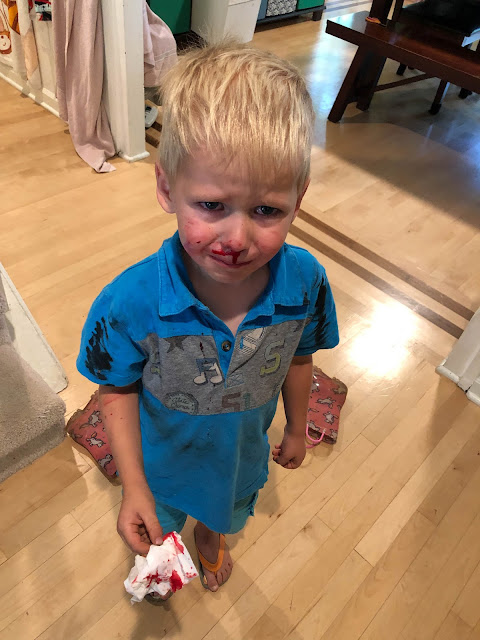