No time for shoes!!!

After a couple of hours I noticed some clouds congregating in the sky. Frothing and billowing on the horizon, they seemed hesitant to break up our fun. I was, likewise, hesitant to call it a day and figured I nurse Phoebe (because that's what she wanted to do) before calling the kids out to head home. But then the sky stopped prevaricating and pounced with unexpected ferocity.

One clap of thunder and the ever-diligent lifeguard blew his whistle to clear the pool.

No one needed to be told twice.

The wind—gusting at 40–50 mph, according to the weather statement—did its best to hurry us along.

The shade umbrellas yelped and started leaping off the tables and over the fences. A few "big boys" let themselves out of the pool enclosure to chase down the stampeding umbrellas while more docile pool-goers (us) scrambled to crank closed any ones we were near.

A few sun-loungers and patio chairs executed less-than-graceful swan dives into the pool while several tables practiced their back-handsprings on the deck.

"Help me gather our things!" I commanded everyone.

Rachel and Miriam sprang to action—lowering umbrellas and stuffing still-soggy swim stuff into our pool bags with me. Zoë and Benjamin wrapped themselves up in towels and added their caterwauling to the already deafening roar of the wind.

"Stop your screaming and help!" I snapped at Benjamin, who shook himself off and started gathering.

Zoë was a lost cause. No way was she going to help. But at least she had her shoes on and was ready to go.

"Is this a hurricane?!" Alexander wailed, holding his shoes like a scandalized woman clutching pearls.

"THERE'S NO TIME FOR SHOOOOOOOOES!"

Being stuck in a thunderstorm is basically his worst nightmare. He had no list! No thunder fort! No go-bag! We were doomed!

"You'll run faster on the gravel with your shoes on!" I pointed out, snatching up the last of the goggles and stuffing them in a mesh sac. "Let's go!"

He dropped to the ground and had his shoes on his feet in 0.3 seconds flat (they're slip-ons), we gathered up our mess of pool supplies, and sprinted to the car, Phoebe jouncing on my hip, screaming mindlessly into the wind.

I'm pretty sure he was about to grab the phone and call his mother to beg her to pick him up ASAP.

Things seemed to settle down quite a bit after that initial cloud burst, though it did thunder for quite a while so we don't regret leaving the pool. And I was happy to have enough rain that I didn't have to water our lawn (which was on my list of things to do). The storm was over by the time we finished eating dinner. We even went outside to try Benjamin's new birthday present (which finally arrived today). 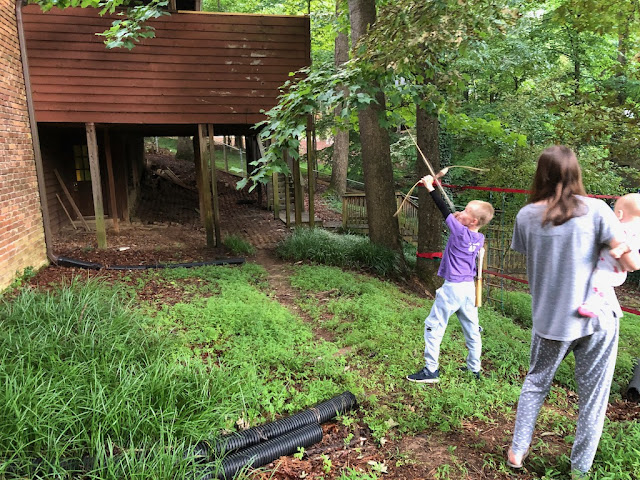 I must have been out of my mind when I agreed to this (frankly, Rachel talked me into it)...but we got him a bow and arrow set. Don't worry—it has rubber tips (but I'm still concerned it could take an eye out). 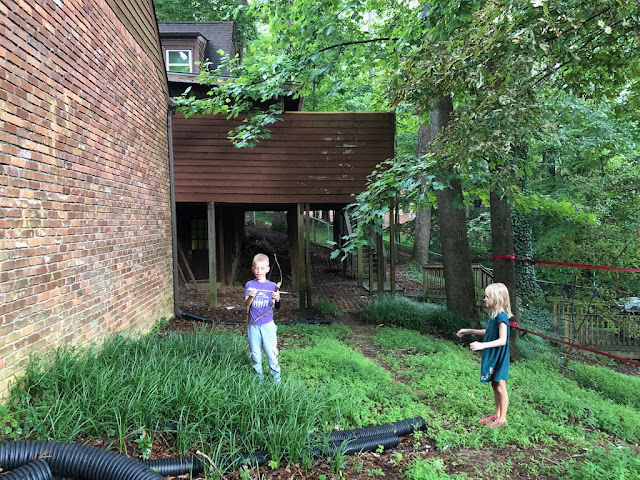 Rachel (and perhaps Miriam) did some archery at Camp Jeremiah Johnson once, so they felt like pros (though Rachel kept trying to shoot the arrow through her fingers when I'm pretty sure you hold the bow below the arrow; she fixed her grip later):

We'll be working on safety, safety, safety with this gift (Rachel assured me she'll be happy to supervise Benjamin's use of this gift and was thrilled that it came with two bow). I also tried out the bow, myself. I've never shot an arrow before, though my grandpa was an excellent archer.

Benjamin has already lost one arrow on the roof, so we'll have to design a target or something to work on our aim as well.

In keeping with Alexander's accident-proneness, he had another little mishap this evening. It had nothing to do with the arrows! He was riding his little bike around and the Zoes (Zoë and Zoey) were catching fireflies. They had an empty animal cracker bin (the big ones from Costco) to keep the fireflies in and they were pulling this around in our big red wagon.

It was getting dark and it had started raining a little bit, so we told Zoey it was time for us to go in (which meant it was time for her to go in as well) and started heading toward our house. She volunteered to pull the wagon.

So, Alexander started riding his bike down our steep, steep driveway and Zoey (who is also four years old) started pulling the big red wagon down the driveway. When the going got tough, Zoey didn't mention she was having a hard time. She didn't ask for help from either Zoë or me. She just...let go of the wagon.

It went careering down the driveway, plowed into Alexander, knocked him over, and then ran right over him! And, of course, since our driveway is so steep he didn't just fall down...he skidded down. So now the side that he landed on his all scraped up.

Fingers crossed he makes it through this summer without a cast...