Super Positive (with COVID, that is)

On this, the 825th day of quasi-isolation, yea, on the very same eve the FDA gave their approval for a vaccine for children under the age of five, Rachel tested positive for COVID.

Right now I'm mostly resigned, but initially I was so livid I was shaking.

Livid because we have done virtually nothing for such a long period of time, only to have to battle this virus now. Livid because I could have—and may as well have—blown our safety on something frivolous, like Disney World, or a trip out to Utah, or whatever. Livid because I wasn't ready to go back to church. In fact, have not "gone back" to church because mostly I feel that it isn't anyone's business to decide beans about my worthiness or devotion or whatever and I can just do what I want. But still livid because of all the pressure we've felt to return.

Livid for every "We encourage each of you to attend in person..."

Livid for every "We encourage you to invite your family, friends, and co-workers to attend this special meeting with you and your family..."

Livid over how we went from Zooming everything safely to "If you are uncomfortable meeting in person for health reasons, please reach out to me..." to radio silence because everyone is tired of making concessions for our family (the last ones standing who apparently still believe in COVID) because opening a Zoom room is, you know, quite taxing.

Livid over every "you don't have to wear a mask" and "let us see your smiling faces" and "everyone's so spread out—move it in" comment.

Livid because of the face painting offered at each ward party. Why...offer...face...painting...when people should be wearing masks?!

Livid because no one wears masks.

Livid because "I know that many of you are uncomfortable attending an in-person activity. However, at the same time, there are many sisters who are eager to associate with our Relief Society friends..." so those of you who are uncomfortable I guess just get to continue wallowing in your lonesomeness for the next couple of years.

Livid because they tried a Zoom-in activity once.

Livid because when I was pregnant no one contacted me to see how I was or what we might need. People asked about me through Andrew. They did end up coordinating meals for our family (which I'm very grateful for). But also they could have contacted me.

Livid that people continue to ask Andrew how I'm doing and when I'll be returning.

Livid because yesterday the youth activity was capture the flag, which I figured would be outside. When we first started letting the girls attend activities it was on the condition that all activities be outside. But permission is a slippery slope and since we let them attend YW classes on Sunday (against my better judgement, mind you, but they were fully vaccinated and double masking so...it was fine, right? And I think even Andrew was feeling the constant pressure to just "get back to normal") so what's the difference if an activity was inside? Anyway, because of the heat wave they moved the activity indoors. So the youth were exerting themselves inside playing capture the flag. Only Rachel and Miriam masked. They should have just said, "We're not allowed to play sports inside," and gone home, but they didn't. And you know what, that's not on me. That's on the leaders.

Livid because how can I advocate when I'm not there?

Livid because when I got my new calling a few weeks ago, I was again pressured into returning to in-person meetings.

Livid over each public prayer that asserts I might return if I had enough faith.

Livid because it wasn't a lack of faith that kept me away but a sure knowledge that this would be the outcome.

So, anyway, Rachel has COVID. I'm certain she got it at church. There's really no other place she could have gotten it. We literally never do anything. We go to the pool, which is outdoors, and avoid other people. And Andrew, Rachel, and Miriam go to church.

And, as instructed (by church leaders, not her parents), she removed her mask.

We should have reminded her to keep her mask on. Speech can be heard through a mask just fine (though to provide accessibility for those hard of hearing, we could simply have a screen up and use the "auto caption" feature on Google Slides—check it out because it's quite cool).

But *sigh* she took her mask off.

Was this the moment she inhaled the virus? I don't know. She was at church for a full two hours, which is a whole lot of breathing. And I know that YW room doesn't have fabulous air exchange. I know this because, uh, we have an air monitor (it's fine; we're only slightly obsessive about how to make living with this virus remotely possible).

You can see that the air quality was pretty good when they arrived at the chapel, but clearly the air exchange in the building is not great. The girls ended YW with 2189 ppm (which means they were breathing in a lot of "used" air, which even though double masks isn't fabulous). 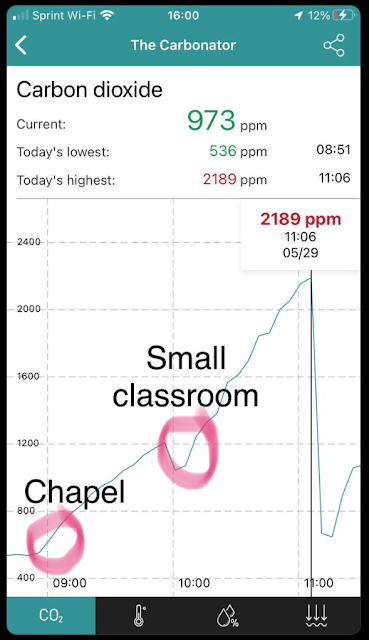 Anyway, here's the text of Rachel's talk, to break up my rants and rambles:

My seminary experience is different from a lot of yours, because it’s completely online. Monday, Tuesday, Wednesday, and Friday, we do lessons on Canvas, and on Thursday nights we meet on Zoom from 8:30 to 9:20, which my family has taken to calling “zoominary”. I like this a lot better than I think I would like in-person seminary, because first of all, I am not a morning person at all and waking up really early to go to seminary sounds absolutely miserable to me. Second of all, it’s just really convenient to be able to participate in seminary and learn about the gospel from home or wherever I might be.

A few weeks ago we went to the beach, and I was still able to keep up in class. One lesson from that week really stuck with me, and even though it’s probably partially because I was sitting on the balcony in the ocean air, it’s also because I found it really interesting. This lesson covered Numbers 22–23, and we talked a lot about Balaam and the talking donkey because all of us were really confused about that story. Basically, Balaam was a soothsayer who was told by the king of the Moabites to travel to Moab and curse the Israelites. Balaam refuses, because it doesn’t matter what riches or honour the king promises him, he cannot go against God. Eventually, though, Balaam agrees to just go, and gets on his donkey to ride to Moab. God decides to send an angel to stop Balaam, but only the donkey sees it, and veers off the path. This makes Balaam angry, so he hits the donkey, and then suddenly it starts talking and asks what it did to deserve being hit. Then, Baalam finally sees the angel and repents, and when he goes to the king to curse the Israelites, he blesses them instead.

This story was really confusing to read at first, and I’m going to be honest and say that when the donkey was talking all I could picture was Donkey from Shrek, but my teacher helped us to understand what these chapters really meant. Discussing this as a class helped us learn about the importance of sticking to what you know is right and obeying God, and showed us that even though the stories in the Old Testament can be crazy, there are good things to learn from them.

In the name of Jesus Christ, amen.

I feel like we've done our very best to avoid this thing and I 100% don't blame us for contracting it in the end. I don't really blame anyone else. But I do reserve the right to feel angry about people's unwillingness to mask or hold outdoor activities. And I absolutely feel angry—livid even—over all the pressure we've gotten to return.
Literally so angry.
I posted about it on Facebook, in part to vent and in part to let anyone who may have been around us know. Because people deserve to know. Not that we'll ever hear a peep from whoever we got it from.
A friend (with a pre-existing condition) remarked about the lack of masks—and compassion—in her ward. I replied, "I wish being careful and kind weren't so frowned upon." And then an American friend who lives in New Zealand responded that New Zealand went the route of being careful and kind—with 97% vaccination rates and mask mandates—and COVID still made it "through."
This virus is, to quote Rachel's YW leader, "insidious." Agreed.
But then let's treat it as such!
Acknowledge it! Wear masks! Avoid close contact! ZOOM ALL THE THINGS!
Ahem.
I pointed out that New Zealand has had 259 deaths per million while the United States has had 3,096 deaths per million. All that care and kindness was not for nothing.
We'll likely be fine. I know that. Deep down inside.
I'm pretty confident about it, anyway.
Rachel is sequestered in the basement. After a negative COVID test, Miriam has gone to have an extended sleepover at Grandpa's house (though I'm nervous about this decision and we'll be testing her tomorrow, but she spent the afternoon doing "study hall" at Grandpa's today, anyway, and literally never even saw the man (he was in his office working, she was in the living room doing schoolwork)). Benjamin and Alexander are both coughing but have both tested negative. Andrew is constructing Corsi-Rosenthal boxes as I speak type.
Oh, and I just found out that the wife of the man who gave the closing prayer on Sunday (take a minute to parse that in your brain) also has COVID. She's also super careful and has hardly been to church in the past few years (because of autoimmune issues and, you know, a global pandemic). I'm assuming that someone else at the pulpit passed it to both Rachel and this woman's husband.
The plot thickens...
Posted by Nancy at 11:16 PM

Email ThisBlogThis!Share to TwitterShare to FacebookShare to Pinterest
Labels: pandemic, sickness and health