Phoebe the door guardian (and brothers with swords)

We had our first day of school today, which went well. Phoebe took a nap while I met with my poetry writing group. And then we went to the pool for a few hours to kind of cool down and kind of feel like we were ingredients in a batch of human soup. It's hot and humid out, that's for sure! Phoebe refused to nap at the pool, which is actually somewhat unusual for her. She was pretty grumpy when we got home, but still refused to nap, so we went outside to play.

She enjoyed sitting quietly outside with me, but was (grumpily) thrilled when her siblings came out to play (because she's convinced they exist to entertain her at her pleasure). The boys were practicing their swordsmanship and Zoë settled on the grass beside me to read.

Here she is posing stoically for me, looking pretty to mark seven months: 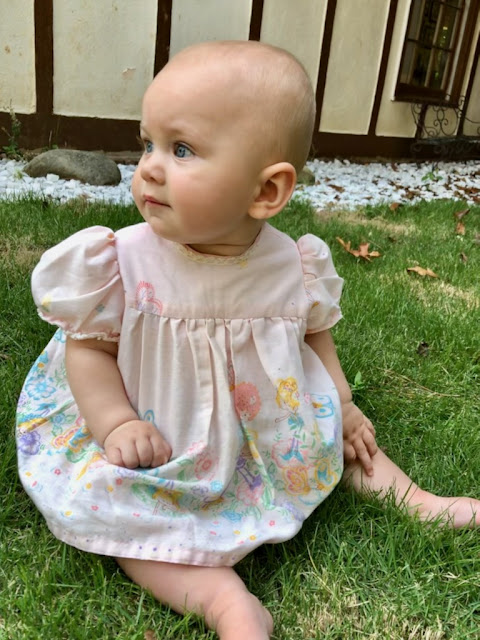 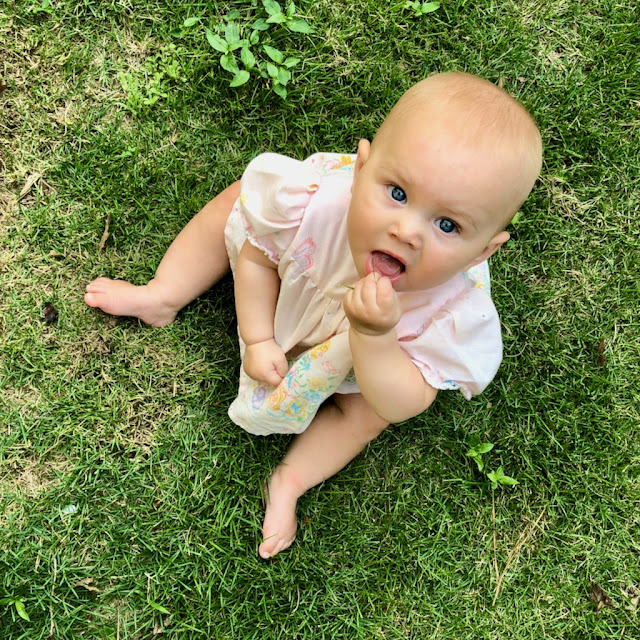 And here she is throwing a big grin at Zoë, who'd come outside to play with her: 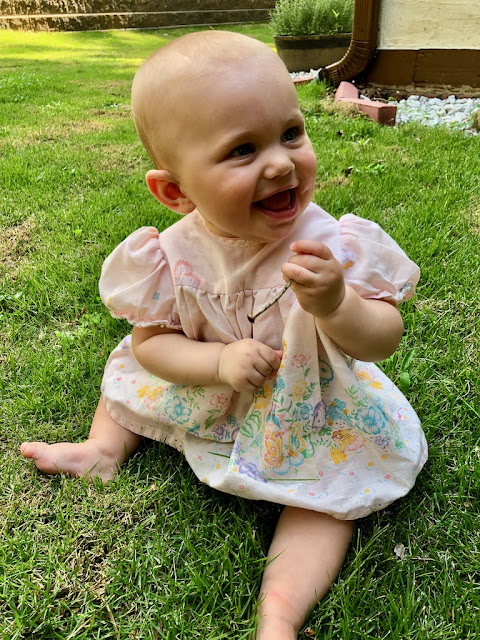 Thanks for rescuing me from boring ol' Mom, Sis! 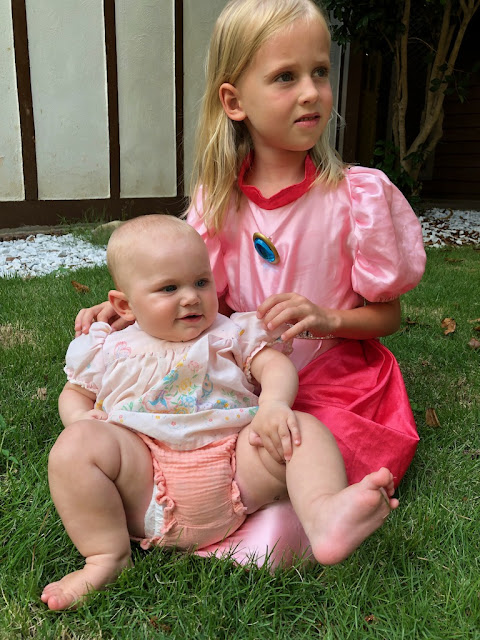 I don't know about your children, but my children seem to enjoy going in and out of the house more than actually being on either side of the door. Something about the liminal space of the doorway is alluring to them—like it's a magic portal to another dimension. They can't get enough of it. They go in and out of it like it's a revolving door.

It's worse when more than one door is unlocked (which is usually the case) because then the kids start streaming in and out of doors, looking a lot like ants working their way through an ant farm.

Even locking them (and sometimes me if I'm outside with the little kids since I'm not the door-locker (*cough* it's Rachel *cough)) out entirely doesn't seem to do much good because inevitably someone inside the house will take pity on the sad little faces staring in the window (or get annoyed by the constant ringing of the doorbell) and will let one of them in. And once one of them is in...

Anyway, Phoebe was rather sensitive about the kids' in-and-out nature this afternoon and every time one of the kids would head toward the door she would track them to see where they were going. If they went inside she would start fussing at them, stopping her fussing when they came back outside.

She enjoyed watching her brothers use their swords. They assured me they were just practicing moves and weren't really fighting (but I heard a few stick clashes while I was reading some I'm not sure this promise was kept 100%). 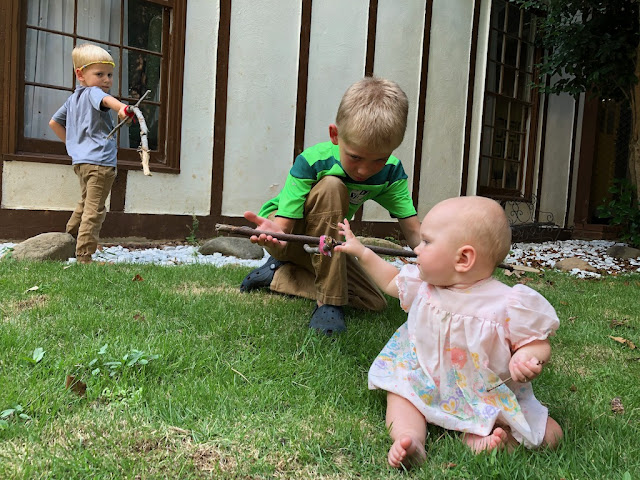 Benjamin made his own sword on Sunday (because that's a good Sunday activity). He's interested in tools so when we cleaned out the garage (last week?) I told him he could have the little pile of scrap would we amassed and was free to hammer nails into it. He's decided he's making a dollhouse for Zoë—he's got a floor and three walls (with a little mirror glued to it to add a little pizazz) and a table, so he's making great headway.
He also nailed two sticks together and then finished fancifying his hilt with some hot pink yarn.
And then when Alexander asked Benjamin if he'd help him make a sword, Benjamin evidently told him no. So Alexander came crying to me.
"Benjamin used two sticks to make a sword."

"Ask Benjamin to help you with that."

At this point, Alexander's voice turned wobbly and he really turned on the waterworks.

"I did! But he said no! And the Zombie Apocalypse is coming and I don’t have a weapon and…"

"Okay. Bring me two sticks and some yarn and I will make you a sword."

It's really not that hard.

Alexander brought me two sticks—he had them all ready—and Rachel fetched a skein of deep red yarn. I started wrapping the sticks together tightly.

"This is taking a long time," Alexander said. "ll get some glue."

"Quality craftsmanship takes time," Andrew said, jumping to my defense. "Your mother is a professional swordsmith."

"I know!" Alexander said. "That’s why we are going to keep her alive at the apocalypse!"

"I see. You’re only going to save me because I’m useful."

I was only slightly offended by this remark—it was as if he only decided at that moment that he was going to keep me around.

"Well, yeah!" Alexander said.  "Everybody’s got to have a job or we sacrifice them to the zombies."

"What could my job be?" Andrew asked.

"Buying lots of leaf-blowers and stuffing them with pine cone ammunition!"

(It's possible our leaf-blower has been used for this purpose before—the pine cones shoot out the end when you turn it on. Very satisfying. Not that I'd know.)

"What about me?" Rachel asked.

"I mean headbutt! You can headbutt the zombies. And Phoebe can just scream at them until their heads explode!"

And that's how the boys came to have a set of swords.

Alexander's sword has since been reinforced; when we came home from the pool today, Benjamin stopped by the tool bench on his way from the van to the garage door so that he could add a nail in Alexander's sword (because plain yarn won't hold together well enough, apparently).

As long as they're having fun (and are going to save me from the zombies), I'm okay with it.