Alexander has become quite adept at calendaring and numbers and things lately, so you'd better believe he'd been counting down to his birthday for weeks prior to the event. Now that it's happening, he's been counting "days since" he turned five.

Here's is morning message, alerting us that he'd finally done it and "today" (October 14th) he was five: 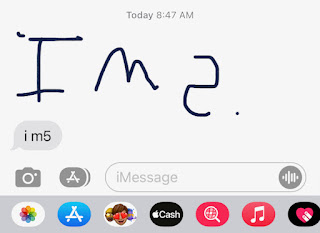 Here he is with his "5" crown on (Benjamin made it for him to wear, and, boy, did he wear it with pride): 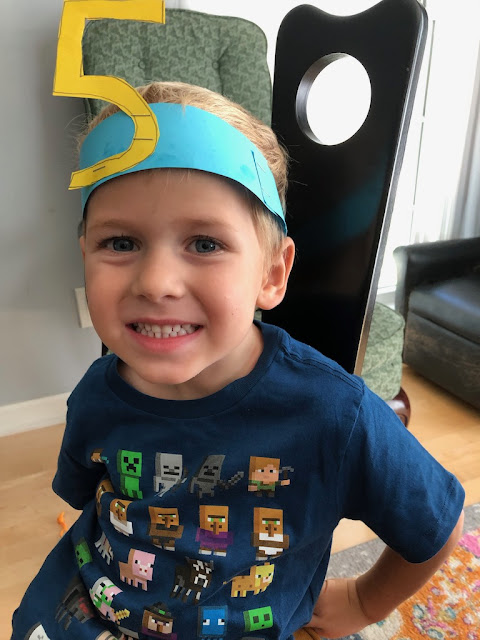 Daddy was gone in the morning, which meant Alexander had to wait to open his presents, which was hard. Homeschooling allows us the flexibility to open presents early in the day so we have more time to enjoy them before bedtime, so we've fallen into the habit of opening presents in the morning (at least for the little kids). But Alexander had to wait because Daddy was off getting a second vasectomy in the morning.
Because if there's one thing better than getting a vasectomy it's getting two vasectomies!
What should have been three appointments (pre-operation consultation, operation, and post-op consultation) turned into something like eight appointments (pre-op, operation, post-op, ultrasound, post-ultrasound consultation, another post-ultrasound consultation, another operation, and...in a few months...the final post-op consultation). Andrew's excited for this journey to be over.
Anyway, Alexander was very excited to get to open his presents when Dad finally made his way home. Grandpa was there for gift opening as well, since he'd driven Andrew to the doctor. Grandpa gave Alexander a little stuffed bat (whose name is Echo): 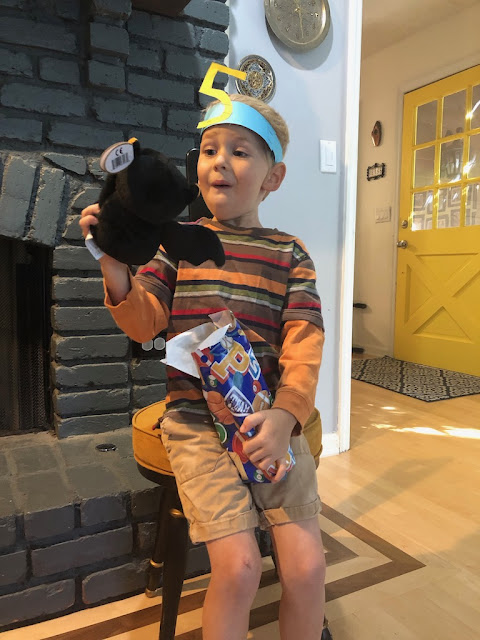 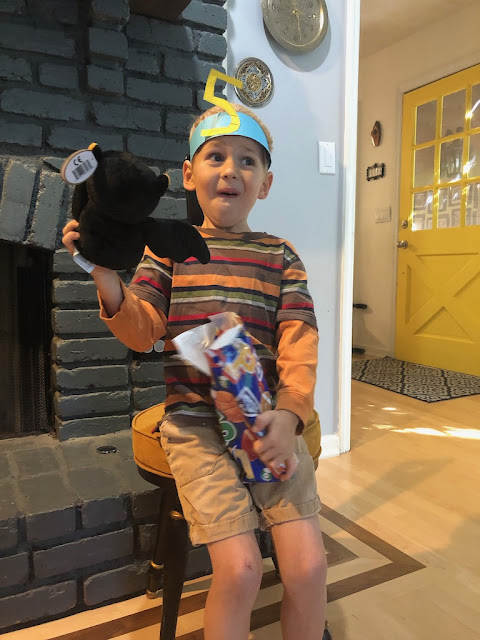 Auntie K sent an owl headlamp (which Alexander has enjoyed wearing on our evening walks now that it's getting dark earlier): 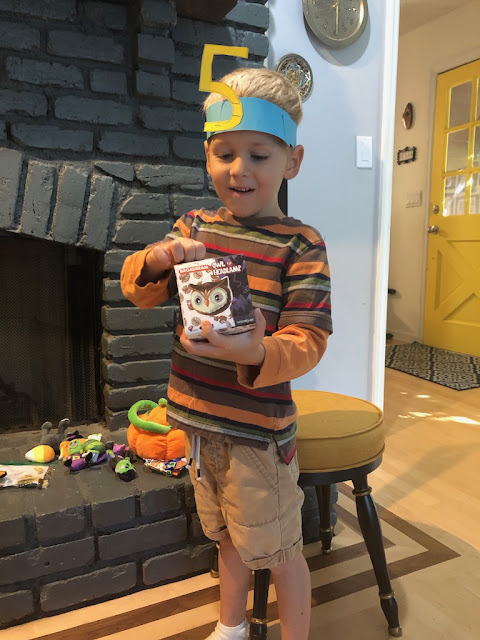 Naanii sent some toy dinosaurs you have to build yourself: 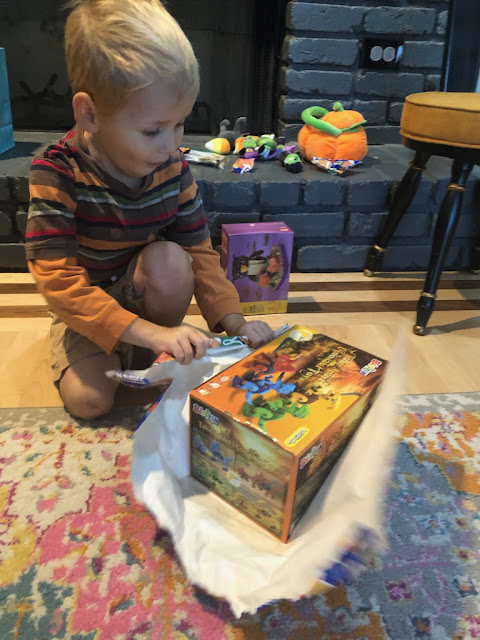 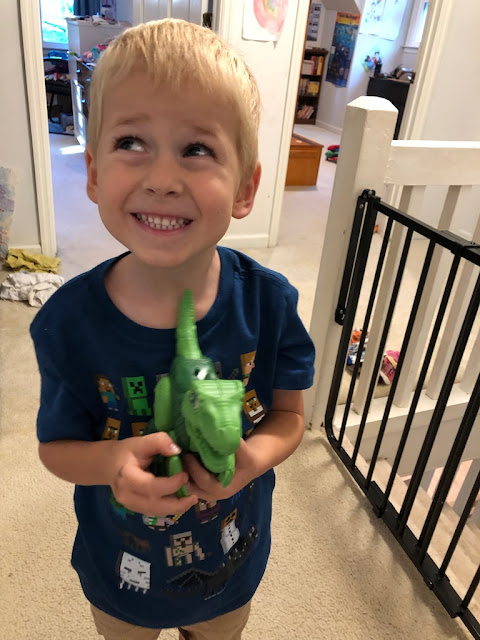 Benjamin also designed Alexander a Lego set called "Owl Swoop." Miriam made him a little needlepoint with "spooky vibes"—his initial and a pumpkin, moon, owl, and...maybe a bat. I can't remember and can't quite see it in this picture. 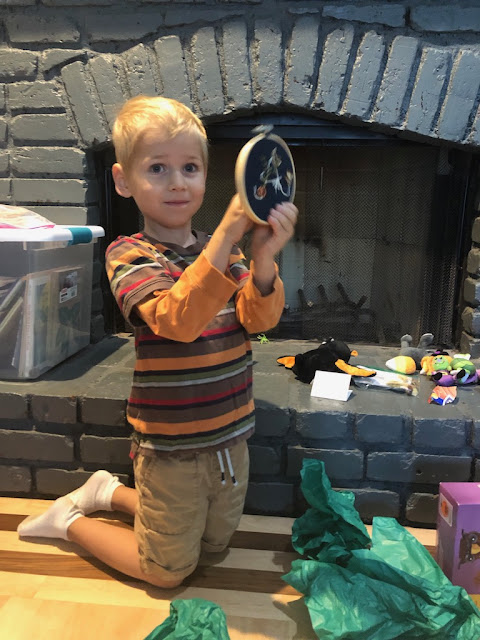 Alexander ended up with a lot of "spooky vibe" toys, thanks to his adorable annoyance at not having anything spooky to sleep with. Auntie Josie sent little ghosts for the kids a little while ago, which they were thrilled to receive. I also ordered a little set of "spooky" toys for him, knowing how much he felt he needed them. Technically they're baby toys (so they have rattles or squeakers or crinkly material inside of them), but he loves his little collection of monsters. They came in a little zippable pumpkin. And then he also got the bat from Grandpa and Auntie Josie sent an adorable little owl (named Fauna, I think) with its own little log to live in. 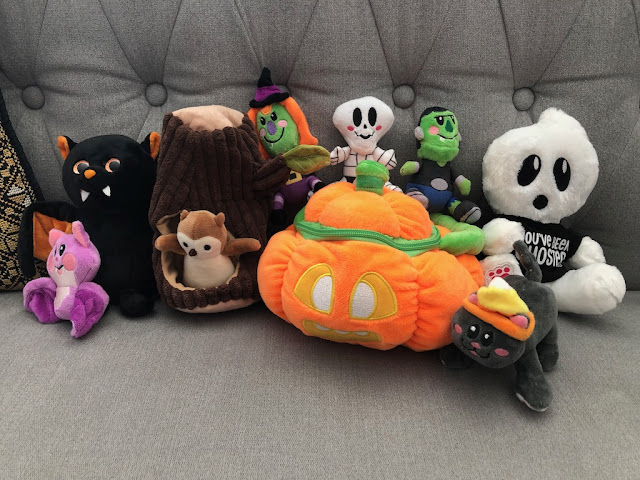 He's the luckiest, most spookifed boy in the world! Since his birthday was on a Friday and we tend to take a more relaxed approach to life on Friday (so that I can do my homework), Benjamin and Zoë were more than happy to play with him (and his new toys) all day.
This kept him out of the kitchen...and thus out of Rachel's hair. She was busy making his cake, of course. She'd started it a couple of days before his birthday and only had one little mishap when, after spending a significant amount of time smoothing the icing, found that some little person had taken the liberty of sampling a few fingerfuls of frosting (it was Alexander). She calmly fixed it up, though, and moved on with her decorating. Here's the finished product: 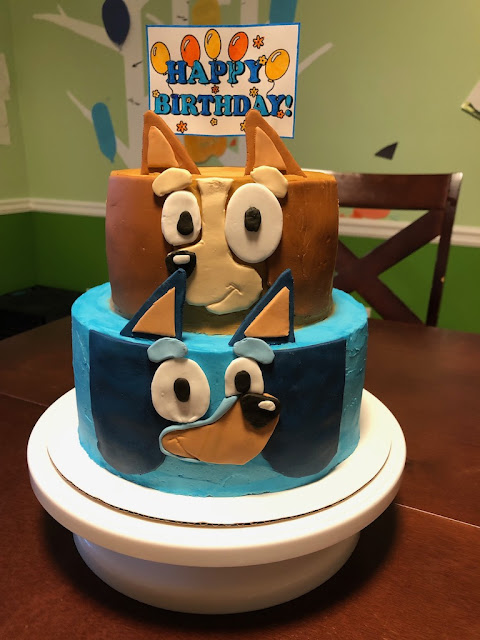 It's a Bluey cake! The official Bluey website has a bunch of resources for things—cakes, crochet patterns, colouring sheets, you name it!

Alexander was quite pleased with the finished product: 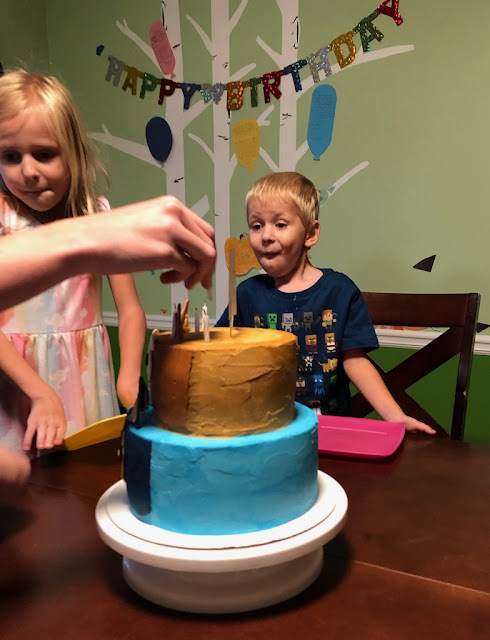 Here's Rachel nervously lighting the candles (while trying not to light the "happy birthday" banner she'd made for the top of the cake): 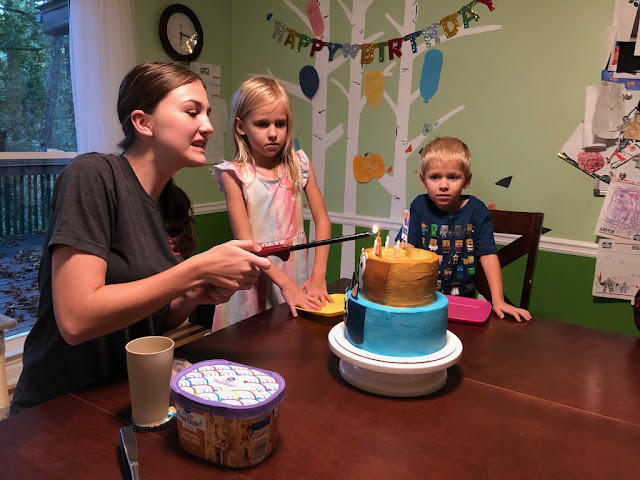 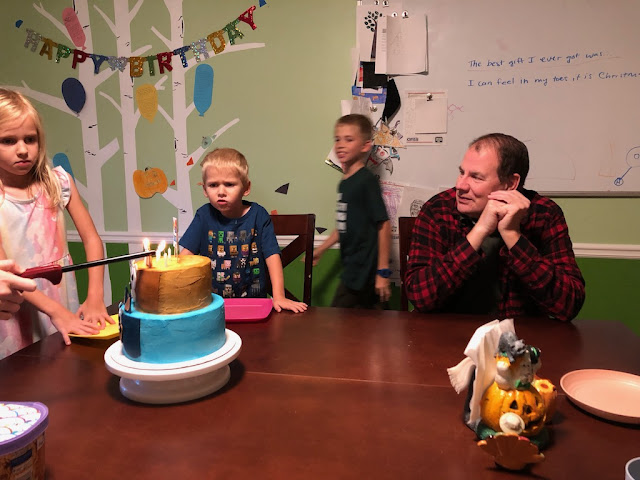 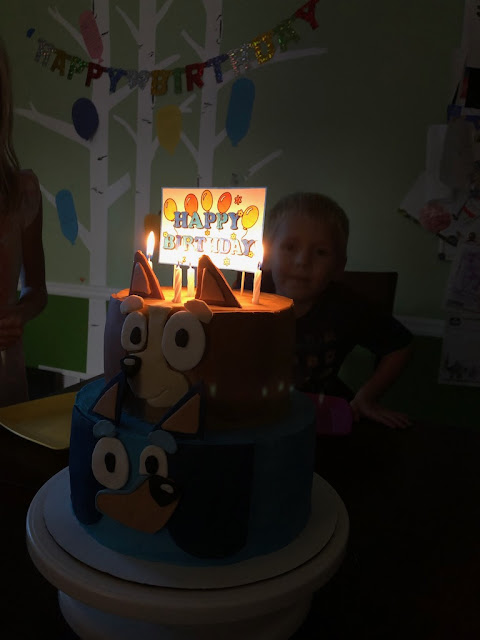 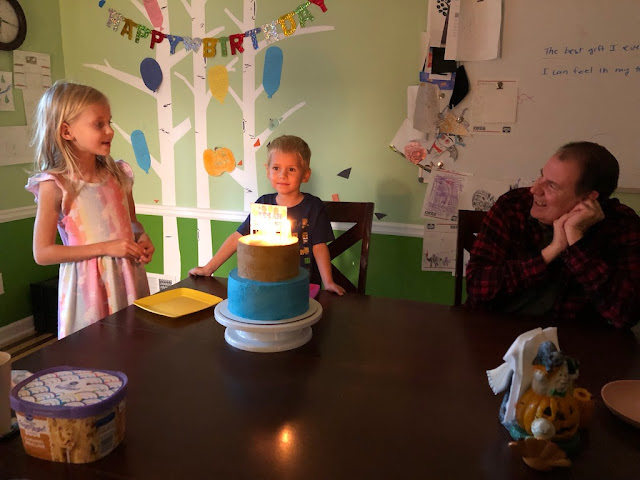 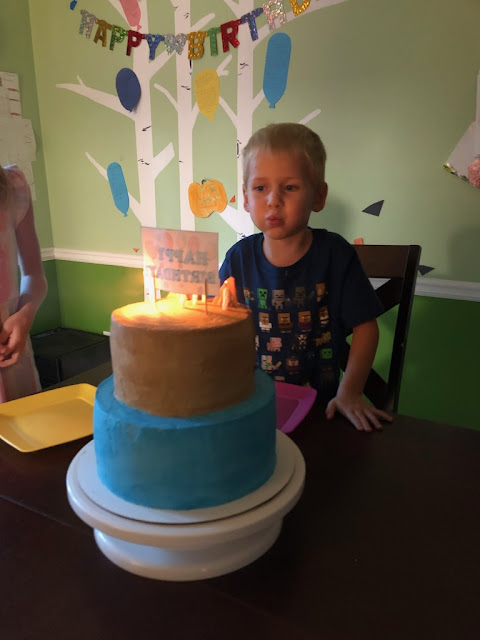 He's just the sweetest little five year old this side of 2022! Here's what everyone had to say to him on his birthday balloons...
From Zoë:
Absolutely extraordinary
Loving
Energetic
Xany (like zany but with an x)
Awesome
Nearly six
Dinosaur-loving
Egg-salutely obsessed with owls
Roomba (he loves cleaning and is very helpful)

A stretch with some things, but very thoughtful overall.

You have had a great year: doing the dishes, reading, and doing stuff when mom asks you to. Happy b-day Owl-man (aka Alex).

I didn't transcribe it as it is written because some of Benjamin's dysgraphia (or what I assume is dysgraphia) naturally appears throughout the text. Dishes was written dishish, Alex was capitalized in one instance but not in another, he forgot to drop the /e/ in loving, etc. But I'm really quite impressed with how much his writing has improved over the last few years! He's come a long way!
From Miriam:
First, I should note that she drew a lovely little owl for him on her balloon. Perhaps I'll take a picture of it. I'm just not great at taking pictures these days. I'm not sure why.

You are already 5! You are so good at reading and such a good helper! I love you so much! You are so creative, good at drawing and you are very kind!
From Rachel:
Dear Alex,
I can't believe you're five years old already! You're so kind and funny and smart, and I love that when you make someone sad or notice that someone's sad, you go to hug them and make them happy. You're such a good dish-doer and owl expert. I love you!

Avian enthusiast
Loves spooky vibes
Eager to help
eXtraordinary reader
This message earned Rachel a big hug from Alexander. He was giving out hugs left and right on his birthday, anyway...but this was an especially big hug.
From Mom:
I wrote him a little poem that can be sung to the tune of "I Saw a Halloween Tree," which is one of his all-time favourite songs.

I know a sweet little boy
Who fills our home with joy!
He plays all day, does dishes, too,
A cheerful kid—do you know who?
A-L-E-X...you!

Wow, Alexander, you're five! I can hardly believe it! You're a sweet, sensitive soul. I love you so much. Thanks for always being willing to help around the house and for being so kind to your little sister. You're cute, creative, and such a good reader, writer, and math-doer. I love you!

And from Dad:
Alex! You're such a cute and curious dude! I'm so excited that you're five now! Happy Birthday!
It was so fun to get to celebrate Alexander. He's a good, good kid.
Posted by Nancy at 1:43 AM